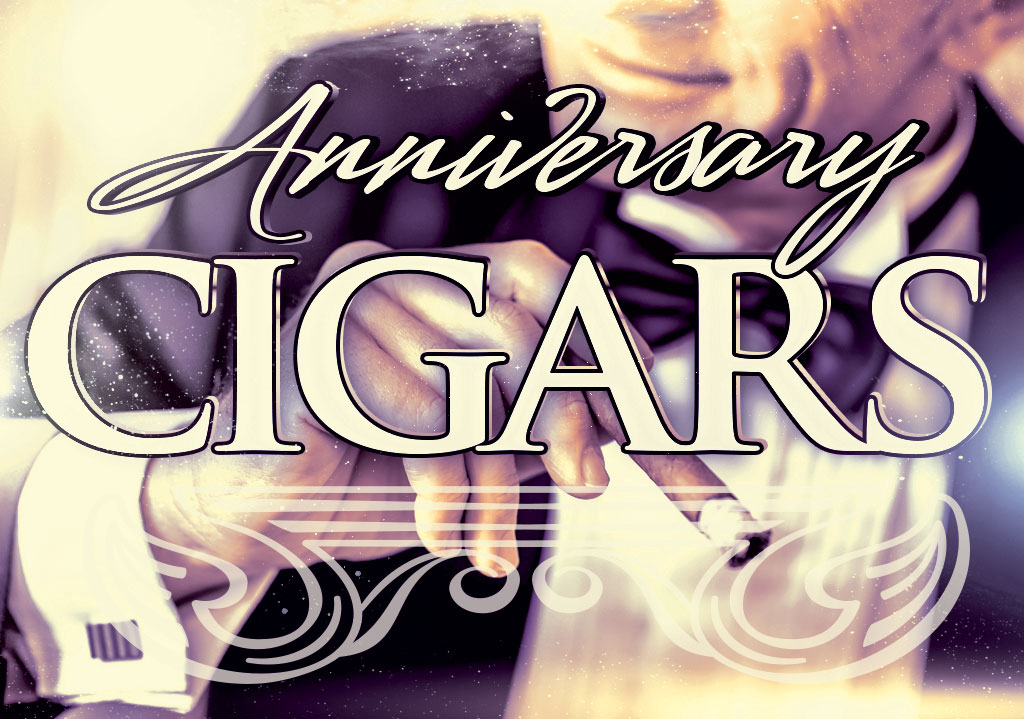 “Sometimes a cigar is just a cigar,” say the internet memes.

But a cigar is celebratory – and as you’ll see, in more ways than one.

Whether you’ve been known to only enjoy a cigar from time to time – your buddy’s wedding, a camping trip, graduation – or a cigar is your way to unwind and reward yourself for a day well-lived, you’ve likely come to the realization by now that a good cigar makes good times, great times. A good smoke is also the key to making that next occasion way more than “special.”

Cigars have gone hand-in-hand with big days for years. Think of all those milestone events that people have celebrated with cigars: “It’s a Boy” and “It’s a Girl” cigars are still a mainstay in the cigar community…some among us likely have our picture in a cap and gown (or our uniform) with a cigar in our teeth; and we all like to treat ourselves to something a little extra-special when it’s our birthday (mine was a Davidoff Colorado Claro).  Men made these days special by breaking out the cigars to celebrate. As for the those who actually make the cigars, there are plenty of reasons – and significant events – that are worthy of a specially-crafted cigar to mark the occasion.

Cigar makers pay tribute to people they love with special smokes: Perdomo’s Edicion de Silvio comes to mind, along with Fuente’s Don Carlos, La Palina’s Mr. Sam and the My Father Le Bijou 1922…that list is lengthy. Cigar makers also mark those special moments in time that have impacted their lives and their families, such as Toraño Exodus – an homage to the family’s escape to Miami at the start of the Cuban Revolution. And there is no shortage of cigars that are crafted to honor a cigar maker’s passions, starting with CAO Flathead (Rick Rodriguez is a car guy), Jon Huber’s music-themed cigars from Crowned Heads (like Headley Grange and Jericho Hill) and the MUWAT Baitfish – which Jonathan Drew made specifically to be his dad, Gary’s, fishing smoke.

Then, there are the Anniversary cigars…marking major milestones in their journey through life, this is when a cigar maker goes to his special stash to create a smoke that’s often a limited edition, and rolled with rare ingredients to celebrate – and share with us – in their continued success. Today, we tackle ten of those top tier Anniversary cigars, and the special occasions they celebrate.

The originators of the Nicaraguan power smoke, Joya de Nicaragua marked 45 years with the Cuatro Cinco line of anniversary cigars. When you celebrate, you break out the good stuff – and in JdN’s case, it’s a very special Nicaraguan ligero crop that had been set aside 5 years ago expressly for this celebration. The rest of this puro mix includes Jalapa-grown tobacco, aged in oak barrels. That extra treatment really smooths out the edges, making this one of Joya’s most savory celebration smokes.

It’s not just the cigar makers that get to have all the fun. We officially put 75 years under our belt in 2014, but the fact that we’re still celebrating 3 years later…well, this is how we party at Famous Smoke Shop. To keep the jubilee rolling, we’ve added Davidoff Famous 75th Anniversary cigars to our special occasion lineup. The blend we chose mixes hard-to-find varieties of Dominican and Nicaraguan tobaccos, a Mexican San Andrés Negro binder, and one of the silkiest Habano wrappers in the Davidoff arsenal. This Davidoff Famous 75th smokes medium to full, and dark flavors abound; the run is limited to 500 boxes, toros only.

Anyone ever told you, “Age ain’t nothin’ but a number”? The people at La Aurora would disagree: with age, comes experience. Eduardo Leon Jimenes started the La Aurora factory in 1903, rolling 100 perfectos a day; a century plus 10 years later, La Aurora dropped their 110th Anniversary cigars in two wrapper varietals, Cameroon and Corojo. We went with the Corojo selection here because it (a) adds some extra oomph to the Nicaraguan & Dominican Cuban seed long fillers, and (b) isn’t saddled with the limited edition-sized price tag that most other celebration smokes carry.

Nat Sherman marked their 85th year in business in 2015, and turned to Manuel Quesada to prepare these anniversary smokes. This celebratory blend takes a massive amount of Nicaraguan ligero, adds some other Nicaraguan-grown tobaccos and rolls the whole thing in the traditional entubado style. Yes, the Nat Sherman 85th is very full in body and flavor, so you just may be feeling this party the next morning. What can I say? These guys aren’t fooling around.

If there were no Padron here, you’d say fire the writer. Never ones to miss marking an occasion, the Padrons have crafted probably the most sought-after special occasion cigars on the cigar store shelf: the Padron 1964 Anniversary Maduro. Shall we say…luxury? We can, and I would tend to hold up the Maduro edition of this all-Nicaraguan smoke as the must-smoke for the additional layer of natural sweetness. Meticulously prepared with uber-premium tobaccos from the Padron stocks that have been well-aged to give you a smoke full of dark flavors, and all to celebrate 30 years in the cigar biz.

Here’s a case where playing the waiting game has proven to be well worth it. Having spent two decades at the top tier of the Nicaraguan cigar trade, Perdomo commemorates these hardworking years with their highly-rated 20th Anniversary cigars. Sourcing core tobaccos from Perdomo farms in Esteli, Condega and Jalapa, they add a tangy sun grown Habano wrapper that makes this smoke a true puro. But here’s where patience pays off: all the ingredients are aged 6 years, then finish their fermentation in bourbon barrels to add even more character to this nearly-full bodied Nicaraguan. Bottom line: worth the wait.

Manuel Quesada has partied hard these past few years – his 70th birthday was marked with a milestone cigar, a full-bodied Dominican rolled in very limited fashion. His family also got in on the act, combining their collective taste buds to make a series of smokes that honor the 40th Anniversary of Quesada cigars. Less limited but no less tasty, these also full-bodied anniversary cigars combine Dominican and Nicaraguan tobaccos into a wider choice of shapes and sizes. The whole thing is finished in a sweeter Mexican San Andres wrapper – a delicious tip of the cap to 4 decades of work.

When this cigar came out in 2015, Rocky Patel was putting an exclamation point on his cigar success to date. It starts with a mix of Honduran and Nicaraguan long fillers…the famous RP spice is dialed way back, replacing it with savory flavors that hit the taste buds in a more plush and refined way. On top, it’s a surprisingly sweet Honduran wrapper that adds subtle nuances throughout. Box pressed, and one of the top achievements to come off the factory rolling tables.

Tatuaje hit the big 1-0 in 2013; making the ten year mark was worthy of a special cigar from Pete & Co., who prepared this intense, and flavor-rich anniversary cigar at the My Father factory. Made with an almost-full blend of Nicaraguan tobaccos, the spice is nice – and each stick is clad in an Ecuadorian Habano wrapper for added complexity, which has been cured to a fetching Maduro color. A very satisfying smoke, celebrating a track record of success.

We make room for Avo Uvezian, master musician and cigar lover, who passed away earlier in 2017. Avo tied both passions together, keeping a jar of cigars on his piano when he performed, and handing them out to fans in between sets. Instead of waiting for a milestone or anniversary to celebrate, Davidoff would instead treat us every year to an Avo Limited Edition cigar for his birthday; this year featured a 6×60 double toro, big in both size and body. A great celebration cigar.

Let me know, with a comment below, what other special celebration cigars you’ve enjoyed, and what occasion they represent – bonus points if you smoked it for a special occasion of your own!

Reading Time: 4 minutes Are the cigars in your humidor looking a little too familiar? Click here to see this month’s trending sticks that are worth a gander, including new cigars from CLE, AJ Fernandez and a Famous Exclusive…