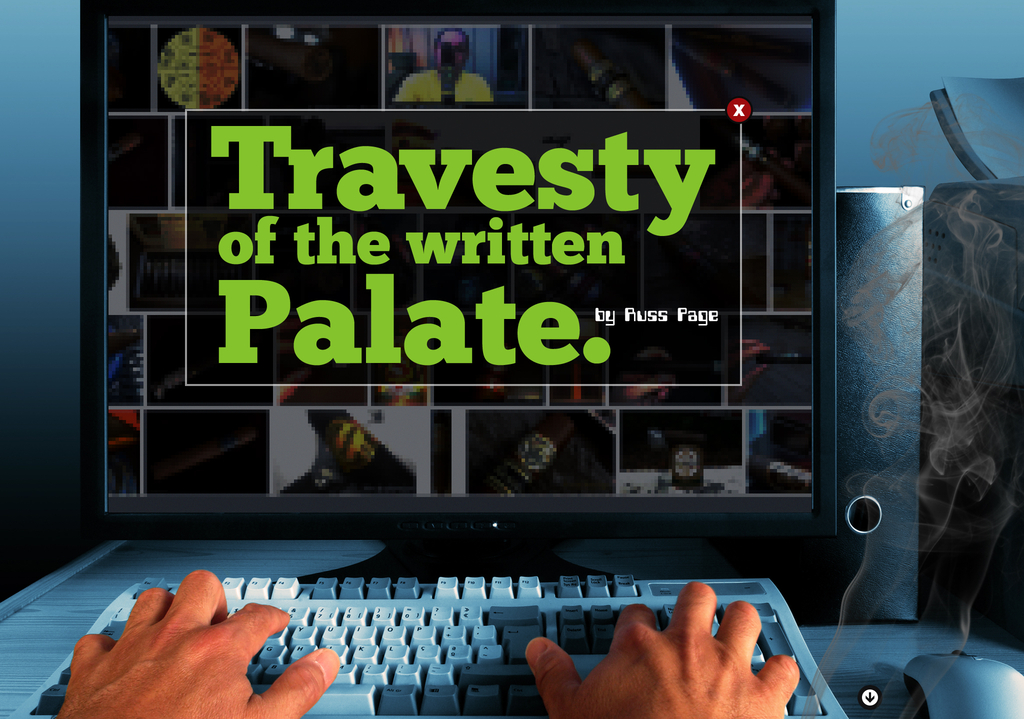 Travesty of the Written Palate

These are 11 out of an astonishing 49 flavors that a reviewer was able to discern from a boutique cigar blend released in 2011…before the cigar was even lit. I wish I could report that cigar manufacturers subsequently head-hunted this reviewer and his gifted palate, and that he now blends some of the most sought-after cigars in the Northern Hemisphere. Unfortunately, I wouldn't be telling the truth.

The truth is that there is a fundamental flaw when it comes to the written review: ANYBODY can light up a cigar, jump on a computer, and write one. Since the fidelity of cigar reviewers is rarely challenged, it is up to the reader to decide for himself whether the review is credible or an unreasonable fabrication (like the aforementioned farce).

It is easy to become overwhelmed when reading a review of a cigar. The descriptions of the flavors, the portrayal of how the cigar is constructed, and the combination of a number of statistics presented is a lot to process. Even after taking all of this into account, we still need to determine whether there is any truth behind what we are reading. The greatest way to understand a cigar review is to make sense of your own palate, or sense of taste.

As a cigar smoker, you should become comfortable comprehending three levels of flavor assessment and “mouth feel,” which are inherent in every human being.

The second level consists of the basic taste types; sweet, spicy, sour, bitter, savory, and metallic. These flavors exist amongst the three different bodies from the first level, but vary in intensity. While still considered a basic flavor set, determining if a cigar is spicy, bitter, or even sweet will assist in divining more complex nuances in flavor and aroma.

Before moving on to the third level of flavors, consider mouth feel, which consists of calcium, coolness, hotness, dryness, fattiness, heartiness, and numbness. These physical sensations inform the perception of taste, and help cigar smokers understand how flavor coats the palate. While the average cigar smoker may feel unable to extract these nuances, they are available to anyone with a working mouth and an open mind.

The third level is the final level of flavors, and includes some of the more esoteric descriptors found in reviews and on flavor wheels, such as chocolate, coffee, leather, grass, dirt, pepper, fruits and a variety of other flavors. At this level, flavors are pulled from memory and experience, and are unique to the person perceiving them. You may taste a hint of black coffee that you pick up at Starbucks weekday mornings, or the apple in a parfait that was served post-Thanksgiving dinner three years ago. As you are able to get past the parts of smoking a cigar that can overwhelm an undeveloped palate, you begin to appreciate the cigar more, and the beauty of the blends reveals itself to your senses.

This brings me back to that outlandish cigar review introduced at the beginning of the article. Just with the simple act of smelling the cigar's wrapper, the reviewer described in detail over 11 different flavors he could sense and 37 more from licking the wrapper.

But why over complicate the review of a cigar?

It can be as simple as the writer wanting to appear impressive, and leading you to believe that he is the foremost expert on cigar tasting. Dogs’ sense of smell is 1,000 to 10,000 times more powerful than humans’, but even they would find it difficult to differentiate between 75%, 80%, and 85% cocoa, all while picking up an additional nine flavors; and yet we are supposed to believe that the reviewer has superhuman olfactory perception?

This isn't to discredit those reviewers who have a legitimately complex tasting vocabulary. While this one particular reviewer took it entirely too far, there are reviewers who can articulate the flavors of a cigar very well-so well in fact, not only can they assess the cigar while smoking it, but are able to recall common flavors in previous cigars they have smoked. A skilled reviewer can detect changes in strength and body throughout the smoking experience, and see through the major flavors to determine the subtleties that might elude an average cigar smoker.

Push yourself to understand the complexities of your palate, and then find a reviewer with a similar palate who is able to portray flavors that are relatable to your own repertoire. It may take some time, but there are talented and often underrated reviewers that will help you expand your knowledge of cigars and their flavors.

Born in Zweibrucken, Germany, Russ Page has lived in every corner of Europe with an extensive stay in Riyadh, Saudi Arabia. Recent graduate of the Global Security and Intelligence program at Embry-Riddle Aeronautical University - Arizona, Russ now works as a sales manager of CDW in Chicago, Il. Since 2010, Russ has developed and ran two cigar forums – Reddit Cigars, and Leaf&Flame - where he is known as the brutally honest ‘SecretAgentMang’.

Reading Time: 9 minutes Our Mid Year Report is out: see the best cigars 2020 has to offer so far, as selected by the Cigar Advisors. Click now for the details on all of our best-in-show picks!