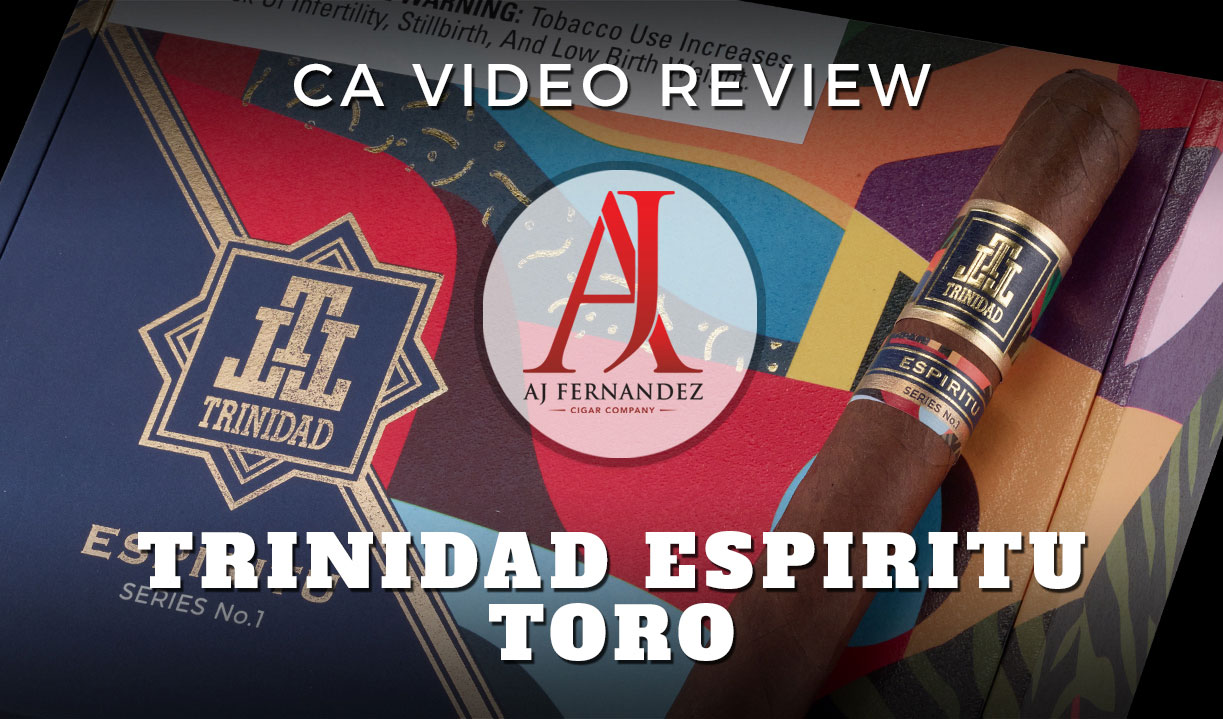 Trinidad Espiritu Cigars – the Back Story

When Tabacalera USA decided to introduce Trinidad Espiritu, they wanted premium cigar smokers to experience the spirit of Havana’s best in a puro created especially for the brand’s 50th anniversary. Made entirely from Nicaraguan estate tobaccos, Trinidad Espiritu (Spanish for “spirit”) is a collaboration between AJ Fernandez and Tabacalera USA’s head of product capability, Rafael Nodal. Although Nodal and Fernandez have worked together before on the Montecristo Nicaragua and the Romeo San Andrés by Romeo y Julieta, Espiritu is the first blend that Fernandez has made for Trinidad. It is also the first in a three-part series of Cuban revivals.

The “Golden Age of Cigars”

“The Trinidad Espiritu is a continuation of the work that A.J. Fernandez and I have been doing for a few years,” said Rafael. “We are reimagining the blends of legendary brands and creating new flavor profiles.”

Medium to full in body, Fernandez was also chosen to recreate this cigar, since his tobacco fermentation and cigar making practices have stayed consistent with the methods his grandfather and father used in Cuba. 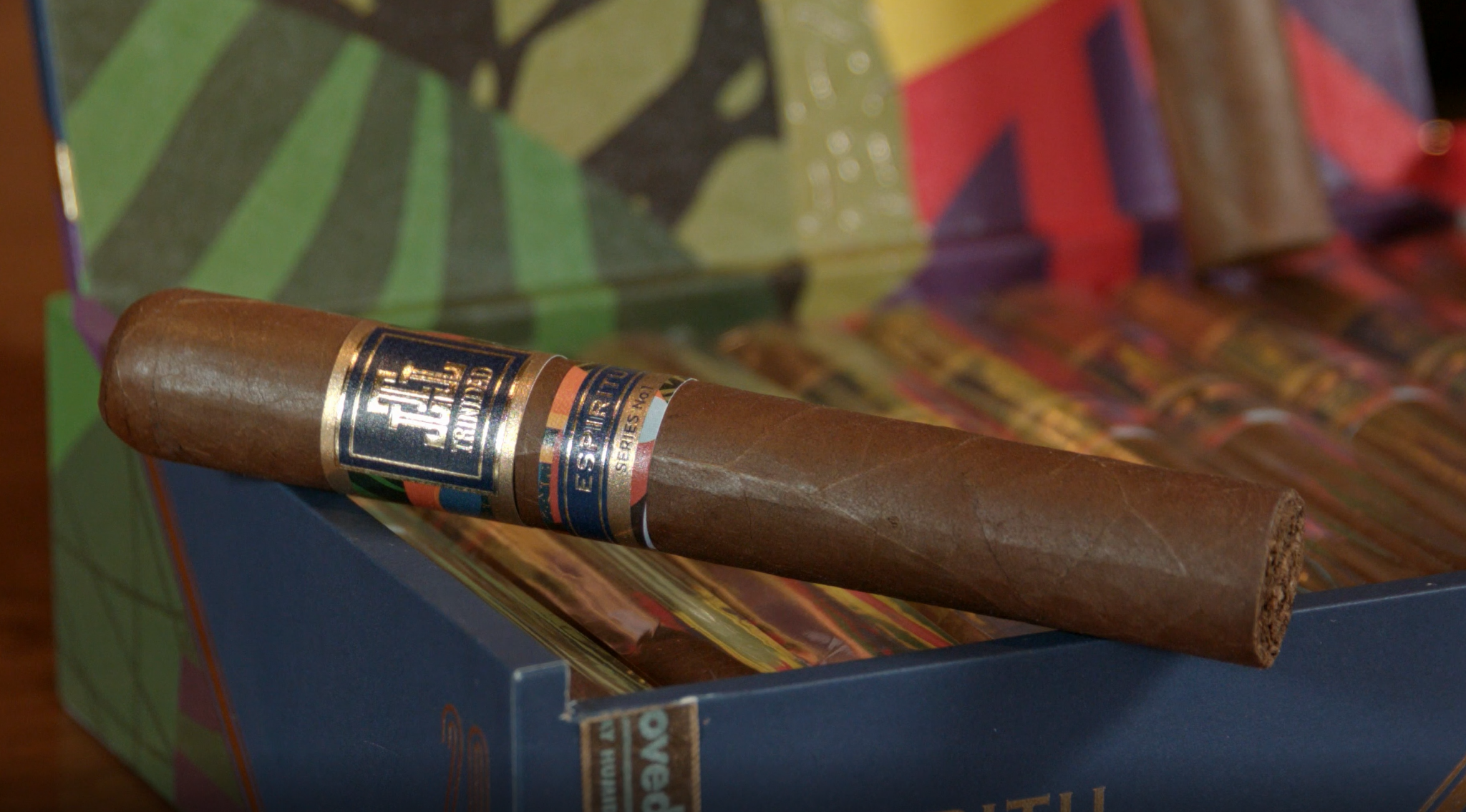 Like AJ, Nodal immigrated to America from Cuba at a young age. As adults, their outstanding palates for flavor and aroma have put them at the top of the premium cigar world, giving this collaborative blend even more weight.

“It has been an honor to pay tribute to our Latin Caribbean heritage and to work closely with Master Blender A.J. Fernandez on this project,” added Rafael. “The Trinidad Espiritu is a cigar to please the palate and speak to your soul. This is a celebration of tobacco, music and all things Latin Caribbean.”

Trinidad Espiritu cigars are packaged in colorfully festive boxes of 20 cigars as follows:

To help create the right mood for smoking Trinidad Espiritu, the label even created its own Latin music playlist. Additionally, if you’re more the rock n’ roll type, you can smoke along to our ever-growing Cigar Advisor playlist.

Construction: Wrapper is a dark toffee brown color; smooth and slightly oily, broken up by a few pronounced veins. The Toro itself is firm – and big.
Draw: Moderate resistance.
Pre-light flavor: Creamy orange citrus sweetness and leather, with a hint of spice.
Toasting & Light: More of the same, with an emphasis on leather and spice.
Base flavors: Citrus, cream, cedar, leather, salt and pepper.
Retrohale: Cedar and spice.
Aroma: Woody and dark.
Burn & Ash Quality: Straight burn reveals a grey, coin stack ash – and it holds really well.
Balance of flavors: Flavors remain evenly balanced as the profile goes through its changes.

Some people might say Trinidad Espiritu is a strong cigar; those people would be right. But before you think this full-strength smoke is too much cigar to handle, we need the flavor to do the talking.

To sum it up…Espiritu is one big, long flavor transition from start to finish. We start at Point A: Thick n’ billowy smoke, with the sweet, creamy citrus pop of an Orangesicle. Then comes spice and leather, with a mouthwatering finish – that’s salt.

Then things get intense…quickly. As the creamy part fades, you’ll start to sense the typical Nicaraguan Habano taste: wood, spice, and a little sweet. It’s also about now that the body and strength get full – fast. 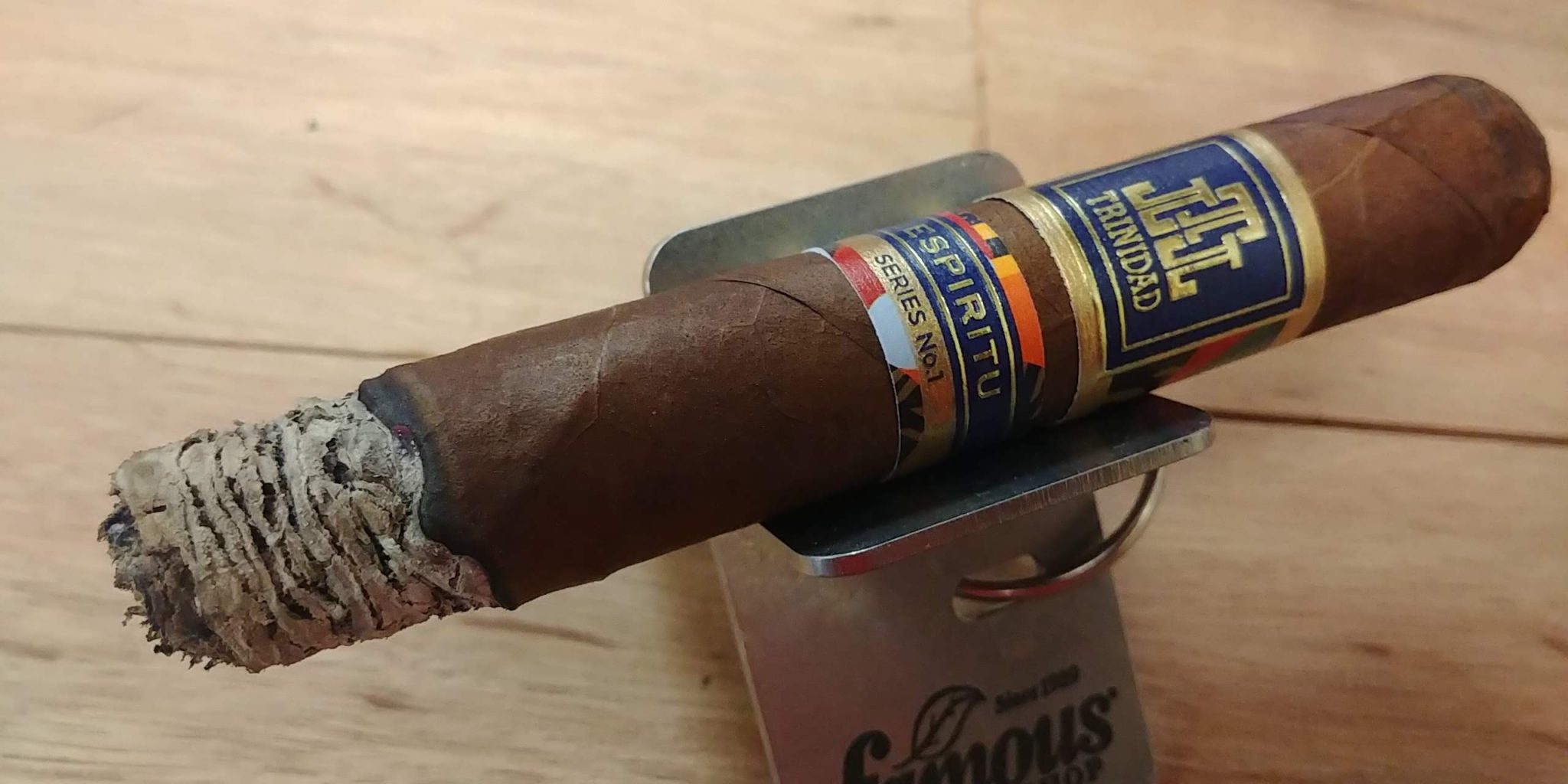 At halfway, cedar and spice come barging to the forefront. The Trinidad Espiritu ends with a whole different character: dark, woody and peppery. It’s a wild ride.

Gary always asks, “Would you call it complex?” Well, now…that depends on how you define complexity. If you determine complexity by the number of flavors, then no; if you define it as how much the flavors change, then absolutely. The flavor is huge – and Espiritu’s profile changes so radically from start to finish that it’s almost a different cigar by the end. So hell yes, it’s complex.

Knowing that AJ Fernandez had a hand in blending this cigar, I’d like to say I knew what to expect of the Espiritu’s style: tasering my taste buds with spice. But this Trinidad has such rich, full body, too – so it feels more like AJ coming at you with a folding chair.

This is not a cigar to be trifled with.

That being said, Trinidad Espiritu can be your cigar…Pros, you’ll find more than enough zip to satisfy your Nicaraguan urges. And if you’re looking to find a smoke that’ll help you knock off the training wheels and break through to the full body/strength category, look no further: it’s this Trinidad. The hype is real. 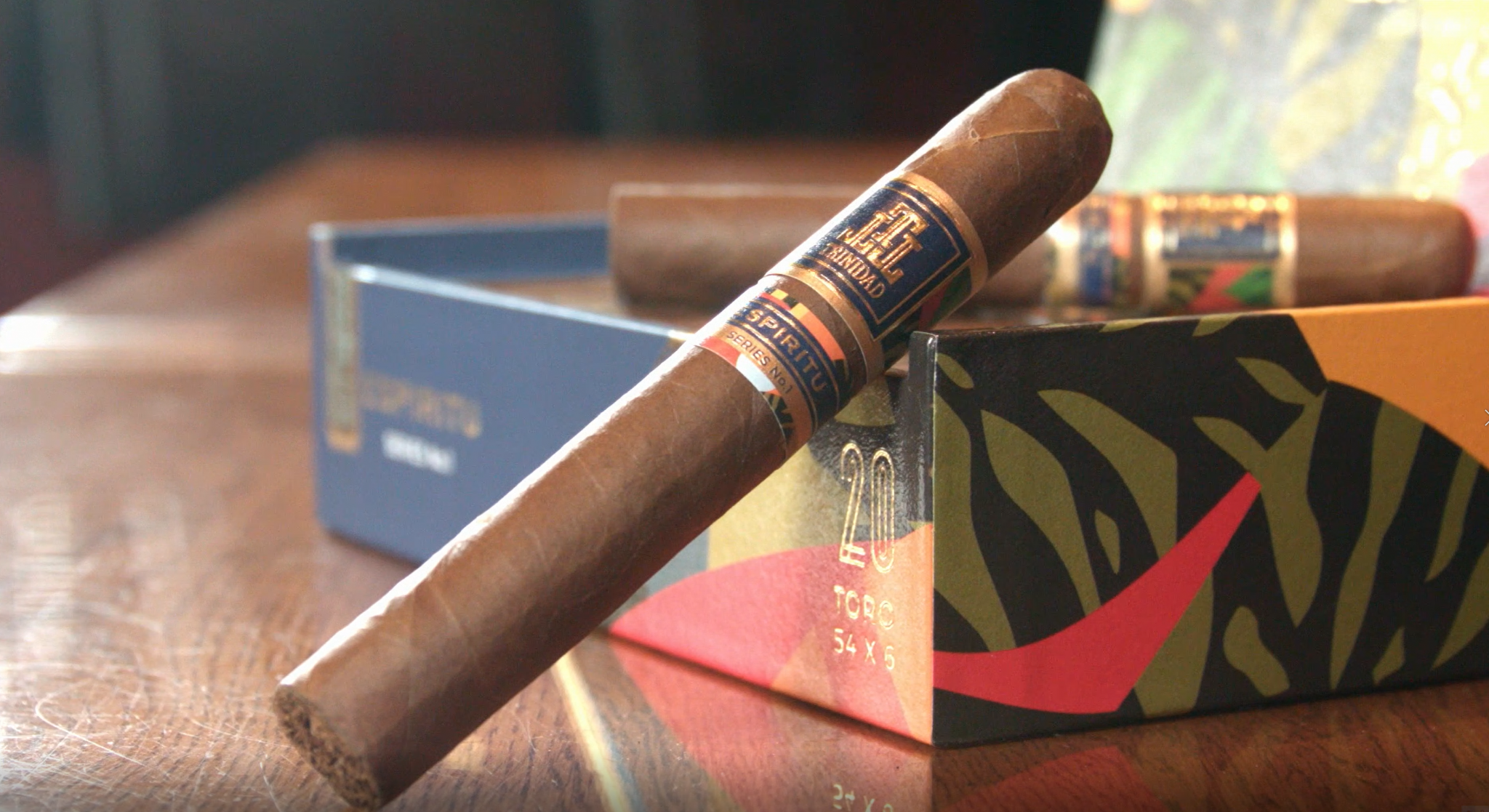 Construction and Overall Appearance: Beautiful. The wrapper, which is not identified by varietal, is even in color with a slight oily sheen. (We guesstimated it was a sun grown Habano.) The cap was well fashioned, virtually seamless, and cut easily, resulting in a perfect circle. The Toro was also well packed and balanced in the hand.
Draw (airflow): Excellent.
Pre-light flavor (cold draw): Salty and leathery.
First few puffs: Leather, salt, red pepper. (Look out!)
Base flavors: Salt, leather, cedar, pepper, sweet spice, citrus, earth.
Aroma: Sweet with a slightly burnt taste.
Burn / Ash Quality: Excellent. The burn was even throughout exposing a very firm, grey ash. No issues or relights. The smoke itself was especially dense and creamy, offering plume after plume of opaque white smoke.
Retrohale: The first third offered pepper with extreme prejudice. At the midsection, it rounded-out with less pepper, and continued so in the final inches.
Balance of flavors: Excellent

Act I: A sharp, peppery start rounds off to a mix of leather, cedar, and some of that earlier saltiness at the half-inch mark. The finish was long with a peppery sizzle which, like a shot of good whiskey, crawls leisurely down the gullet.

Act II: The cigar actually mellowed into a pleasant, sweet and spicy brew underscored by notes of cedar, some nuttiness, a citrusy tanginess, and light pepper. With the saltiness just barely traceable, this section was incredibly flavorful and consistent in every respect.

Act III: A continuation of Act II, the cigar moved up the dial in strength while the body remained medium-full as some earthier flavors pushed the sweeter notes off-stage. The smoke remained smooth, full-flavored, and remarkably creamy.

Suffice it to say. . .One of the most impressive cigars I’ve had of late, to say the least. (I chided myself for not discovering this cigar sooner.) Virtually bursting at the seams with flavor, body, balance, and complexity, each puff of the Trinidad Espiritu Toro was like having my own little fireworks display. This is a true aficionado’s cigar with everything hitting on, not eight, but 12 cylinders.

Construction: Reddish in hue with an oily surface, extremely well rolled, and what looks to be a small patch over a blemish on the cap, which came off perfectly.
Draw: Goldilocks zone.
Pre-light flavor: A little fig and fruit. Big sweet barnyard note on the aroma.
Toasting & Light: Vanilla cookie, with some salt and pepper on the tongue.
Base flavors: Vanilla cookie, butter, pepper, spices, and a dash of citrus peel. Earth and wood later on.
Retrohale: Starts off very peppery, smooths out quickly with more spice and some added citrus.
Aroma: Caramelized sugar if it were slightly over-burnt.
Burn & Ash Quality: Straight burn line and a sturdy black and grey ash.
Balance of flavors: It’s a tad spicier than I’d prefer, but worth it considering the overall flavors. I’d put this cigar well above average for balance.

Regarding the recipe, there’s not a whole lot to go on. What we know…it’s a Nicaraguan puro. An old-school puro at that – down to the country of origin level. This normally means I should expect a cigar that’s earthy, sweet, spicy, and strong. Not a bad baseline to describe Trinidad Espiritu.

First, let me talk about construction. Other than the small patch on the cap I noted, the cigar was rolled flawlessly. It was smooth, oily, and perfectly straight – the kind you’d use as a quality example in a factory. Hats off, Mr. Fernandez. 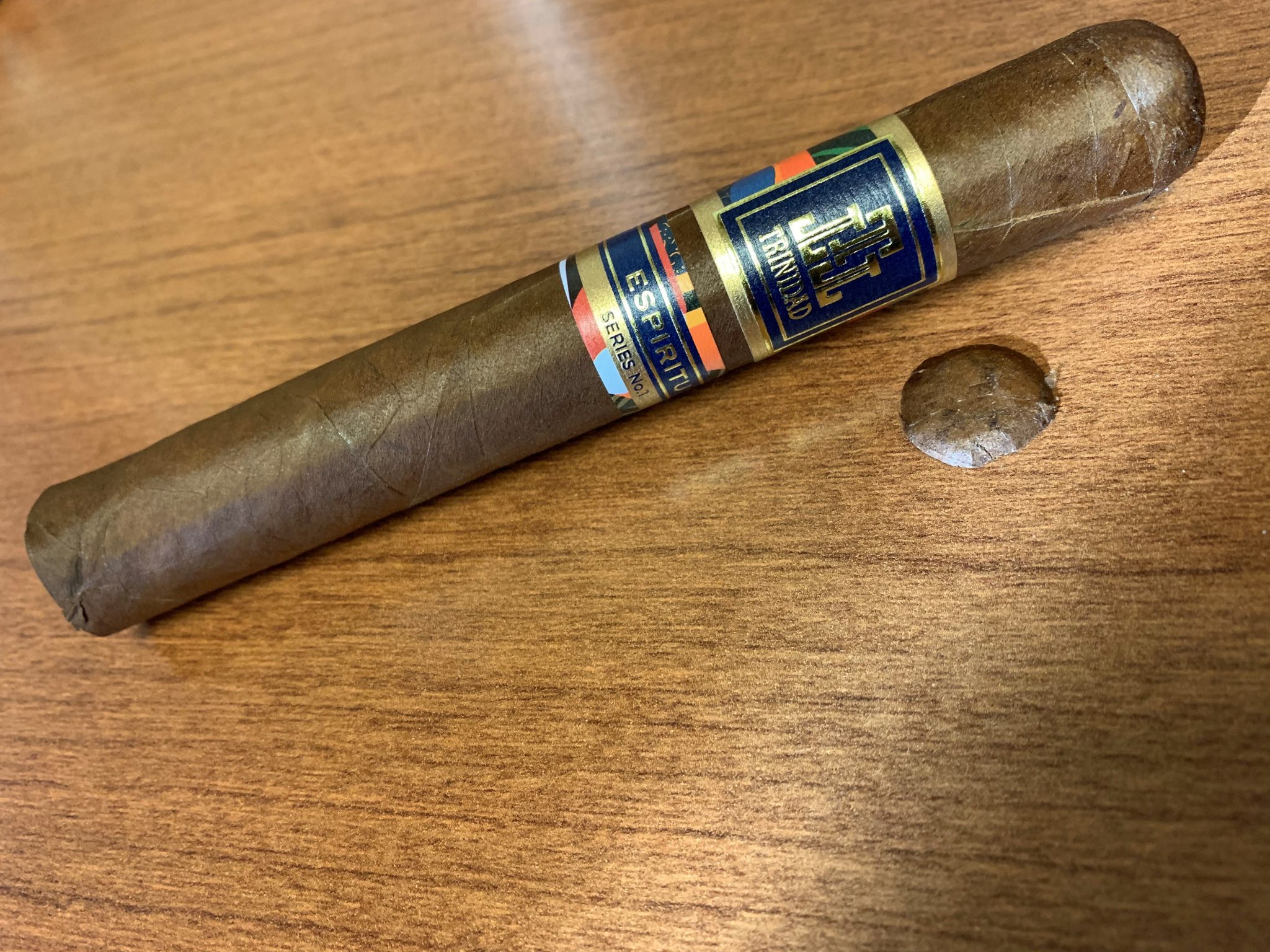 Then, there’s smoking it.

Trinidad Espiritu’s first few puffs were among my favorite: vanilla cookie, butter, pepper (lots of it), and citrus peel. It seems the cigar’s a bit front-loaded, but it smooths out pretty quickly – for me – within the first inch. A quick bit of insight: I was lucky enough to be gifted this blend by Rafael Nodal in the Fundador size two months ago, which is an event exclusive. Where that was strong to a gut-punching degree, the Toro has more balance and depth. The contrast between a 40 and 54 ring is stark.

After that initial full-bodied blast, the cigar settled in to medium plus, yet still full strength. Some earthier qualities with cedar and dark wood were starting to surface, but that creamy vanilla cookie note had sadly tapered off. There was still butter (now salted), spices, and pepper and I could still pick up the citrus through the retrohale. From there, it was simply a relaxing, no-fuss cruise to the band.

I think you’ll find this stick gives some extra bang for the buck, as any cigar north of $10 should. Moreover, Trinidad Espiritu is one of the few examples of cigars that I think smoke better in a larger ring gauge. If you’re like me and go for Coronas, Lonsdales, and Lanceros, this is a good reason to color outside the box.

Reading Time: 4 minutes Gary goes one-on-one with the Hoyo de Monterrey Epicure Selección No.1: while it looks very much like a Cuban Hoyo at a glance, this artisanal, all-Honduran Corona Extra dances to its own special beat. Want to know who’s in the band—or more accurately—what’s beneath it? Check out this review now.

2020 CA Report: 12 Top Shelf Cigars You Should Smoke At Least Once