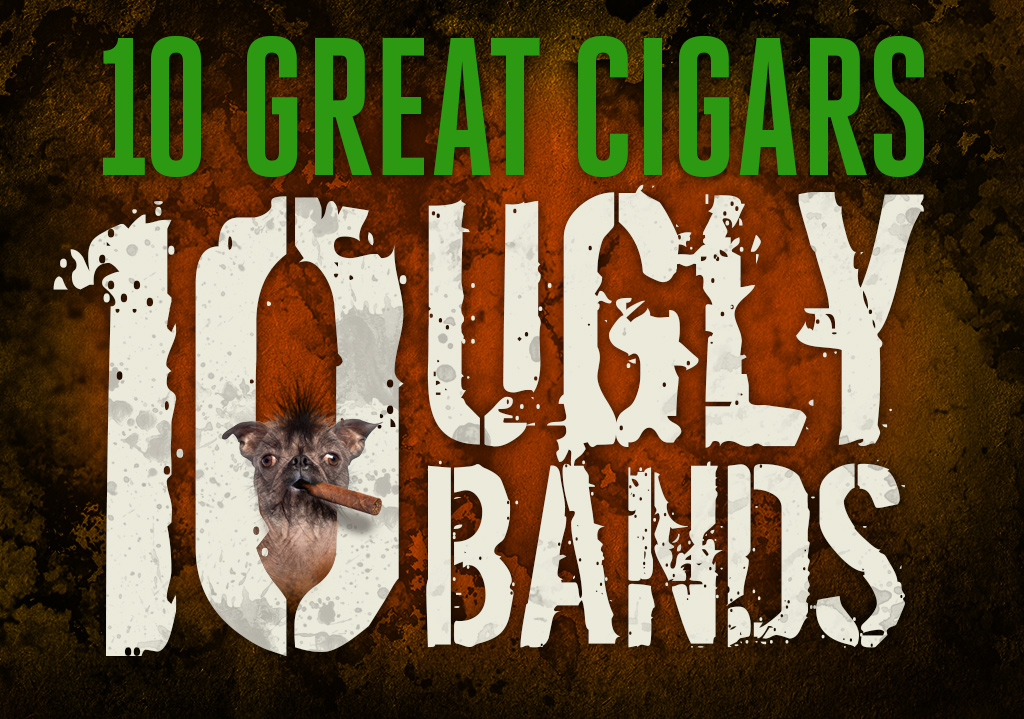 Ugly Cigar Bands, But These Are Truly Great Smokes

I’m not a fan of clichés but, “if the shoe fits”. . .which is why I’m leading with this old maxim: “Never judge a book by its cover” – a truism that’s applicable to all premium handmade cigars. Think about it. Chances are you’ve smoked at least one cigar that was surprisingly good in spite of its less-than-mediocre band.

I began thinking about this and did a little searching of my own. I found that there are a lot of excellent smokes out there whose manufacturers, for whatever reason, skimped on the bands. As I always say, you don’t smoke the band, but in our culture, we like pretty things, especially when we’re laying out a decent amount of cash for them. Moreover, if you only bought the cigars with the most beautiful bands, you’d be missing out on some really great smokes. Remember that cigar makers are artists of a totally different nature; for them, it’s the smoke that matters.

For this article, the CigarAdvisor editors have chosen 10 cigars that, ugly cigar bands be damned, are “must try” smokes – even though they may not make a great first impression. We just hope the manufacturers have a good sense of humor.

As one of the leading boutique cigar brands, one which has produced some of the most ornate cigar bands of late (see their American Classic or Mundial cigars), by comparison, the MAXX band is fairly simple with its bold block letters and silver background. But smoking a MAXX is a delight. With its dark Nicaraguan Habano wrapper that drapes a full-bodied blend of ligero & viso tobaccos from Colombia, Nicaragua, Mexico, Honduras, and Costa Rica, it’s one of the smoothest, and most complex in the Alec Bradley portfolio, offering a perfectly-balanced fusion of dark, sweet tobacco flavors and sumptuous aroma.

I didn’t think this band was all that unattractive, but with H. Upmann being one of the oldest “traditional” premiums, normally banded with one of the most recognizable logos, the newfangled HAVOC band does leave a little to be desired. I suppose they were going for a more “modern” approach, but HAVOC makes up for its band’s lack of artistry once you light it. A Nicaraguan core blend, Dominican binder, and a plush Mexican San Andres wrapper combine for a deliciously creamy, medium-bodied smoke that tosses some tasty change-ups along the way.

When this line first hit the streets, the boxes featured original artwork by Cuban artist, Edin Gutierrez. Each box had its own theme, the lids were already framed for hanging, and each band matched its box cover art. Pretty sophisticated. But they were pretty pricy, too – over $200/box! Today, the artwork is no longer on the box lid, and bands are a mere shadow of the originals in detail, but even though the factory has changed (they were originally made by Don Pepin), these Nicaraguan puros continue to offer an outstanding smoke. Full-bodied, earthy, woody, sweet n’ spicy, these vitolas have it all in spades, including a much more affordable price.

So, there’s this bright red band with the image of a man who looks sort’a like “The Great Khali” of WWE wrestling fame, and he’s pointing a .44 Magnum at you as if to say, “SMOKE THIS CIGAR, OR ELSE!” Made by Jesus Fuego – one of the true masters of the craft – with a diverse, 4-nation blend rolled in a dark, naturally sweet Brazilian Mata Fina leaf, you should give this cigar a shot, or else you’re missing one of the best full-bodied cigars out there. When lit, they offer a smooth, complex smoke with plenty of kick in the recoil, making this blend a powerhouse that won’t overpower you.

Made with the most select Honduran tobaccos, including a flavorful Corojo wrapper, the Asylum 13 band is far from fetching with its metallic red background, fanciful font, and odd-looking skulls. Couldn’t they have at least made the logo a little bigger? OK, but none of that matters very much once you fire-up one of these full-bodied smokes. Because the tobaccos are grown at Christian Eiroa’s Rancho Jamastran in Danlí, renowned for its top-grade Corojo leaf, you’re assured an extraordinarily well-balanced puro. The smoke is exceptionally creamy, earthy and sweet, ranking the Asylum 13 line up there with the best Honduran cigars.

Speaking of great-tasting puros, let’s go to the D.R. where SWAG cigars are made under the guidance of Rafael Nodal. I actually found this double-banded effort more appealing than some of the other guys. Suffice it to say, it’s very simple, and may not be the most eye-catching band in the shop, but I have to give them credit for the white sleeve, which adds a certain degree of elegance to the presentation. As for the smoke, that’s another matter, since this all-Dominican leaf blend offers a complex, medium-full smoke laced with notes of earth, cedar, coffee, sweet spice, and some underlying pepper in the mix, making it an extremely worthy choice.

Made in George Rico’s Miami factory with an all-Nicaraguan blend of rare Estelí & Jalapa Ligero long-fillers, Jalapa binder, and a Nicaraguan Habano 2002 wrapper, the full-flavored Barracuda STK really puts out on all cylinders. The band, however, is a bit shmaltzy. We liked the use of the aggressive fish in reflective silver, but the font is underwhelming, and the use of turquoise (perhaps representing water) with the little squigglies along the top and bottom, might make it more suitable for surfboards. Otherwise, you’ve got yourself one great-tasting cigar.

I think the idea behind this packaging concept was to keep it as simple as possible, but we found its foot band more deserving of a yawn for having the “The Edge” logo scribbled over it. Fortunately, you have to remove the band to light these cigars, and the attractive, 5-year-aged Costa Rican maduro wrappers more than make up for their lack of a collar. The Nicaraguan-Honduran long-filler core is pumped full of ligero for a smooth, spicy, and well-balanced treat; not to mention that it was one of the leaders of the full-bodied cigar movement in 2004 and created quite a sensation, making it one of Rocky’s perennial bestsellers.

Our video producer made a really entertaining video for Tobajara cigars, which is more than we can say for the band. The artwork shows a non-descript, native Indian woman at the top smoking a cigar, but it’s very tiny, and the forest green and cream color combination left us a little flat. Nonetheless, what you’ve got here is a really fine and affordably-priced premium rolled in a Brazilian wrapper leaf with a decent amount of Brazilian ligero for a zesty, medium-bodied smoke abounding with flavors of spice and semi-sweet tobacco.

When Ernesto Perez-Carrillo releases a new blend, cigar smokers pay attention, and this E-Stunner series comes with all of the rich flavor and aroma you’d expect from one of the world’s leading cigar makers. What we didn’t expect was a band that looks like a cowboy belt buckle. Yet, these cigars are top-notch through-and-through offering a full-bodied, Nicaraguan-Dominican filler blend seamlessly rolled in an Ecuadorian Sumatra wrapper, which is similar to Señor Perez-Carrillo’s original La Gloria Cubana blend. The result is a smoke of stunning proportions with a lot of flavor bucking around, so, watch your head.

And so, we’ve come full circle. Never judge a cigar by its band; it may be the best cigar you’ll ever smoke.

IMHO, the only bands that I don’t like are the Rocky and the asylum. I would, and have bought the others based on reviews and band. Again, just my opinion.

the R.P. is my favorite

Reading Time: < 1 minute This H. Upmann by AJ is “built like a tank” while “the smoke is quite dense offering notes of earth, oak, and leather.” Click and get the full rundown on this cigar in under 60 seconds, in our H. Upmann AJ Fernandez cigar review…

2020 CA Report: The Best Selling Cigars of All Time