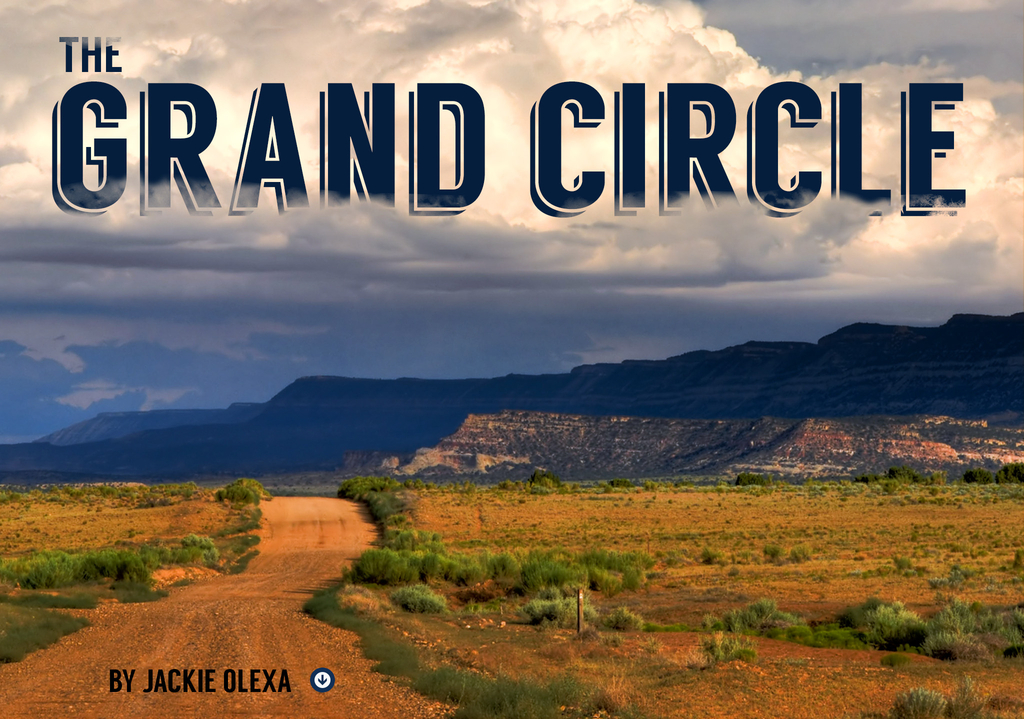 I dream of red rock. Sitting in my backyard on a glorious April afternoon in Pennsylvania, I'm dreaming of it now. If I close my eyes to the warm spring sun, the greenery fades away and my mind's eye conjures visions of astounding color and form: monolithic, magical and so very red. And white. Pink. Vermillion. Let's throw in some yellow, green and blue, just to keep things interesting. The desert southwest is rainbow-hued perfection.

“The Grand Circle” is the unofficial designation for a massive land area encompassing vast swaths of five southwestern states — Arizona, New Mexico, Colorado, Utah and Nevada. It contains America's largest concentration of national parks and monuments interconnected by designated Scenic Byways and rugged backcountry roads. The imaginary Circle is roughly 1,400 miles in circumference and over 500 miles across, primarily in Utah. Contained within are such iconic and well-known parks as Zion, Bryce and Arches. But beyond the sea of summer tourist stops is an ocean of lesser-known magical landscapes. And the roads less traveled are where I am drawn again and again.

At over 1.7 million acres, The Grand Staircase Escalante National Monument (GSENM) is the dominant land area of the Grand Circle, although perhaps the least visited due to its remoteness. That's a shame, because it also contains some of the most visually stunning and varied scenery imaginable. A trip through the Grand Staircase will take you, from north to south, through four distinct geologic steps, or staircases: Pink, Gray, White and Vermillion. Arguably the most scenic of the backcountry roads that crisscross the GSENM, Cottonwood Canyon Road allows visitors to experience them all in one spectacular 38 mile off road journey. The road is often used as a “shortcut” from Bryce Canyon south to the Page, AZ area, although it's crucial to check in at a ranger station before attempting Cottonwood Canyon Road. In good conditions it's navigable in a high-clearance 4WD vehicle; however it's often closed when flash flooding makes certain sections impassable. Don't count on saving time on your journey south from Bryce, though. Those 38 miles are hard going and will take at least three hours to navigate, not including many stops along the way.

Less flashy than its Cottonwood cousin, Skutumpah Road is a gorgeous backcountry jaunt through the heart of the Grand Staircase. It's usually passable unless there have been heavy rains in the area and there are a number of worthwhile stops along the way, including Bull Valley Gorge and Willis Creek slot canyon. Willis Creek has a year-round flow of water, making it a refreshing and easy two mile hike on a hot day. Skutumpah is always a great Plan B when Cottonwood Canyon Road is impassable.

The Smoky Mountain Road is a rugged 78-mile dirt road that crosses the Kaiparowits Plateau as it cuts through the Grand Staircase/Escalante National Monument backcountry area. Here the road ends just above Big Water, Utah with a spectacular view. Lake Powell can be seen in the distance. This last stretch of road is only recommended for experienced off-road drivers, as the narrow, crumbling switchbacks down to the canyon floor can be treacherous.

The most famous of the Southwest's slot canyons, Antelope Canyon is the most visited as well. During the tourist season, throngs of people vie for space in the narrow slot, which makes difficult the long exposures necessary to capture the sinuous curves in low light. The canyon is divided into two sections, Upper and Lower, and both are located on Navajo tribal land just over the border in Arizona. Lower Antelope is the more photogenic of the two sections, and has the added benefit of typically being less crowded. 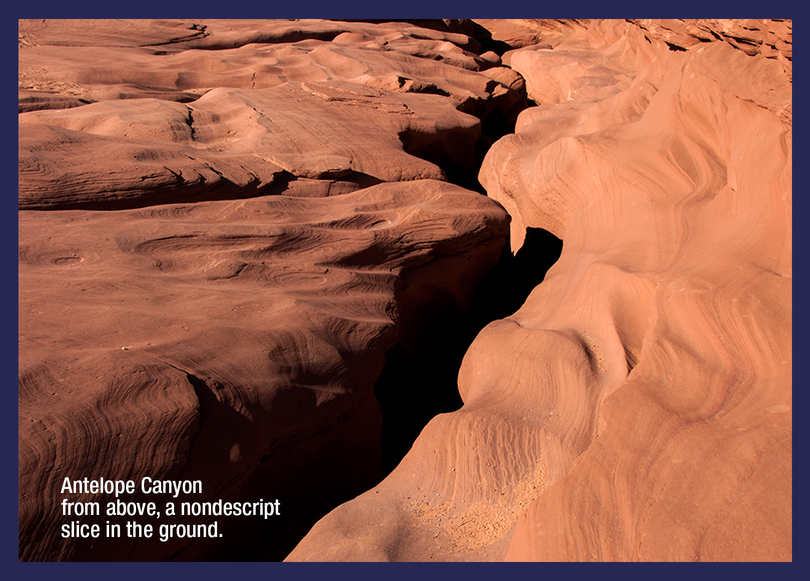 While the Southwest is best known for its arid desert sands, there is also an abundance of water, including perennial and seasonal streams, rivers, lakes and reservoirs. The largest body of water contained within the Grand Circle is Lake Powell, a man-made reservoir created by the controversial damming of the Colorado River in the 1960's. Controversial it may be, but there is no denying that Lake Powell is a feast for the eyes: blue-green water in stark contrast to the towering red Navajo sandstone walls. There are over 1,900 miles of shoreline, including over 90 off-shoot canyons. Thorough exploration of Lake Powell would take a lifetime.

The lake can be explored by boat from below, but in my opinion the best views are from above. The Alstrom Point/Romana Mesa area overlooking Gunsight butte and Warm Creek Bay is arguably the most scenic of the lake overlooks, and as the best sites often are, it's also the most difficult to access.

Just 17 miles south of the town of Escalante along Hole-in-the-Rock Road (BLM 200), you'll find the Devil's Garden. BML 200 is usually passable, although its washboard surface is guaranteed to make your teeth rattle. But arriving for sunset makes the journey worthwhile as you come upon the sentinels of the Garden.

About 15 miles east of the town of Escalante along Scenic Byway 12, you'll find the trailhead for Calf Creek Falls. A three mile trek through the sand brings you to an oasis in the desert, a cascade of water that plunges over 125 feet down a sheer multi-colored wall to an icy and refreshing pool below. While the trail is a short riparian path along the perennial creek, if there has been an absence of rain the sand can be deep and somewhat taxing.

I don't sleep much the night before a drive into White Pocket.

There’s a reason the rangers discourage would-be visitors from making the trek to the White Pocket area of the Vermillion Cliffs National Monument. The last 15 miles are some of the nastiest, deepest sand you’re likely to encounter in the desert Southwest. It’s hard going, nerve-wracking, and can be dangerous — even deadly — for the ill prepared. If you’re not experienced driving off road through deep sand, you will most likely get stuck. And due to the remoteness of the area, it may be some time before someone comes along to help you extricate yourself.

The drive behind me, I no longer strain for a first glimpse of the chaotic, alien landscape. Instead I steel sideways glances at my companions. If it's their first visit to the Pocket, I know that as we crest the sand path and the Pocket comes into full view, they'll come to a dead halt in slack-jawed wonder. Yep, close your mouth. We're here.

When she's not marketing the finest premium cigars in the world, Jackie Olexa is an avid outdoor photographer with a particular love of the America Southwest. She has traveled and photographed the area extensively, venturing down roads seldom traveled to produce images of the most remote and fascinating geologic areas.

How to Get Fit the Easy Way