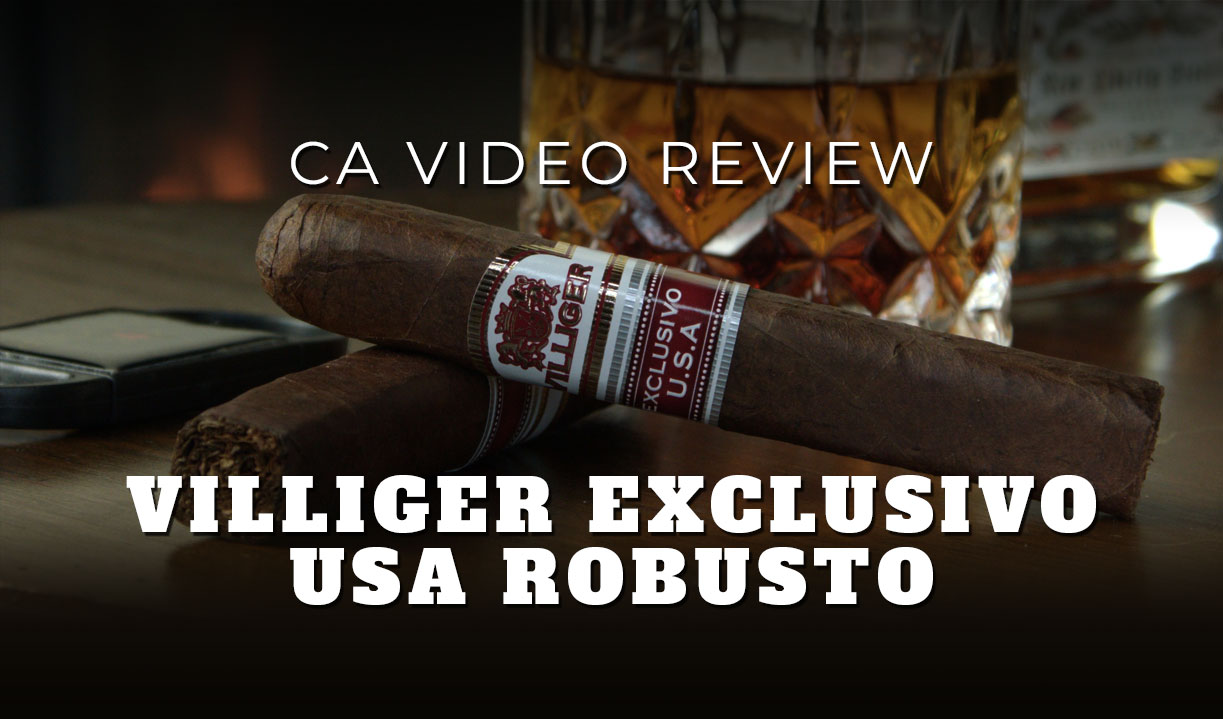 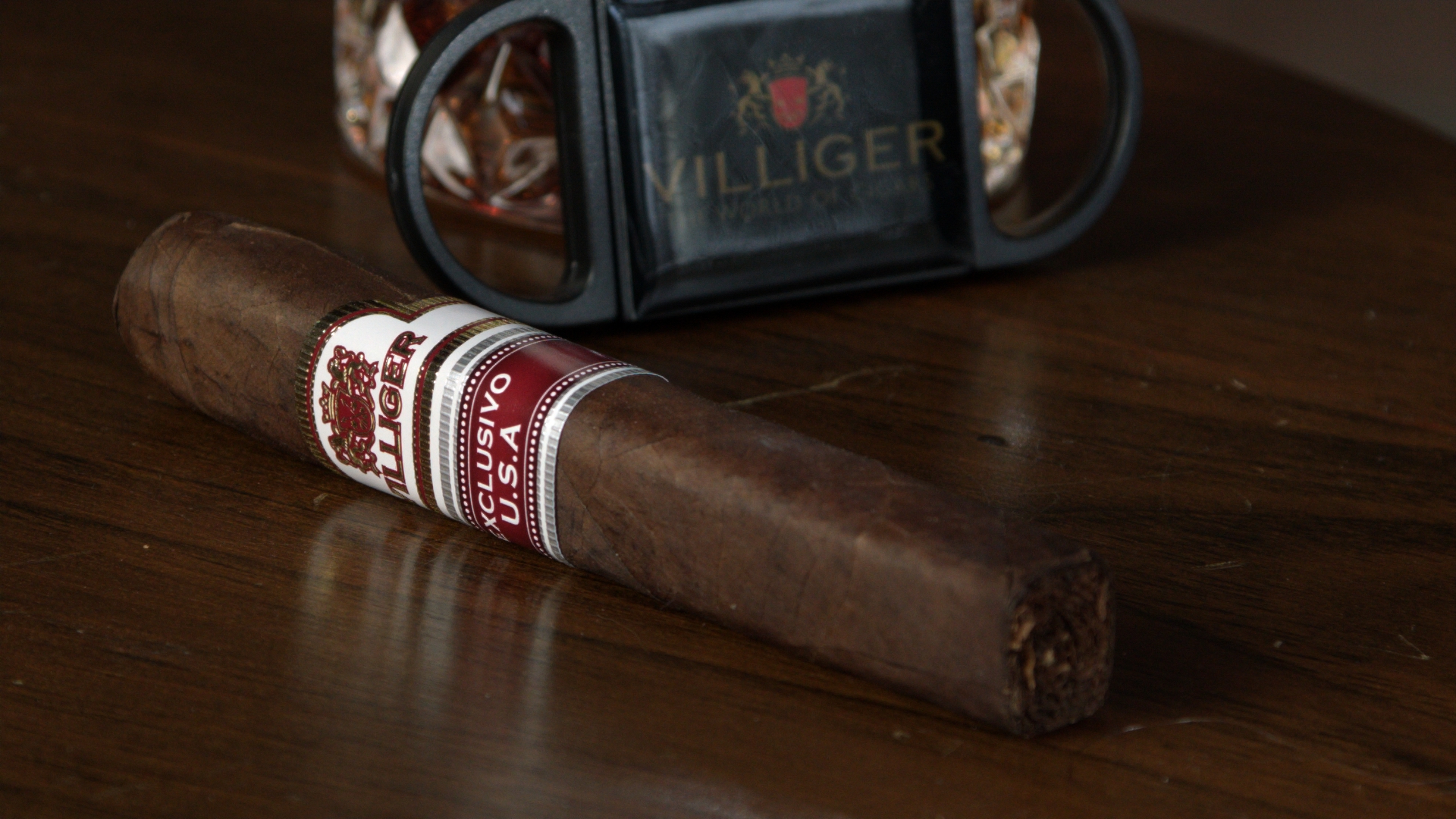 In March of 2020, for the first time in the company’s history, Villiger Cigars North America decided to do an exclusive, limited edition release for members of the Tobacconists’ Association of America (TAA). For the job, Heinrich Villiger tapped the blending mastery of Ernesto Perez-Carrillo. Box-pressed in a blushing Ecuador Sumatra wrapper, a Nicaraguan-Dominican core naps below. and was born. That cigar, the Villiger TAA Exclusive, was a 6”x54 Toro. And even though that show is history, the blend lives on. It’s found a new name, a new size, and a new home at Famous Smoke Shop. It’s the Villiger Exclusivo USA Robusto. Also made in limited production, the cigar is affordably priced and presented in boxes of 20 cigars. 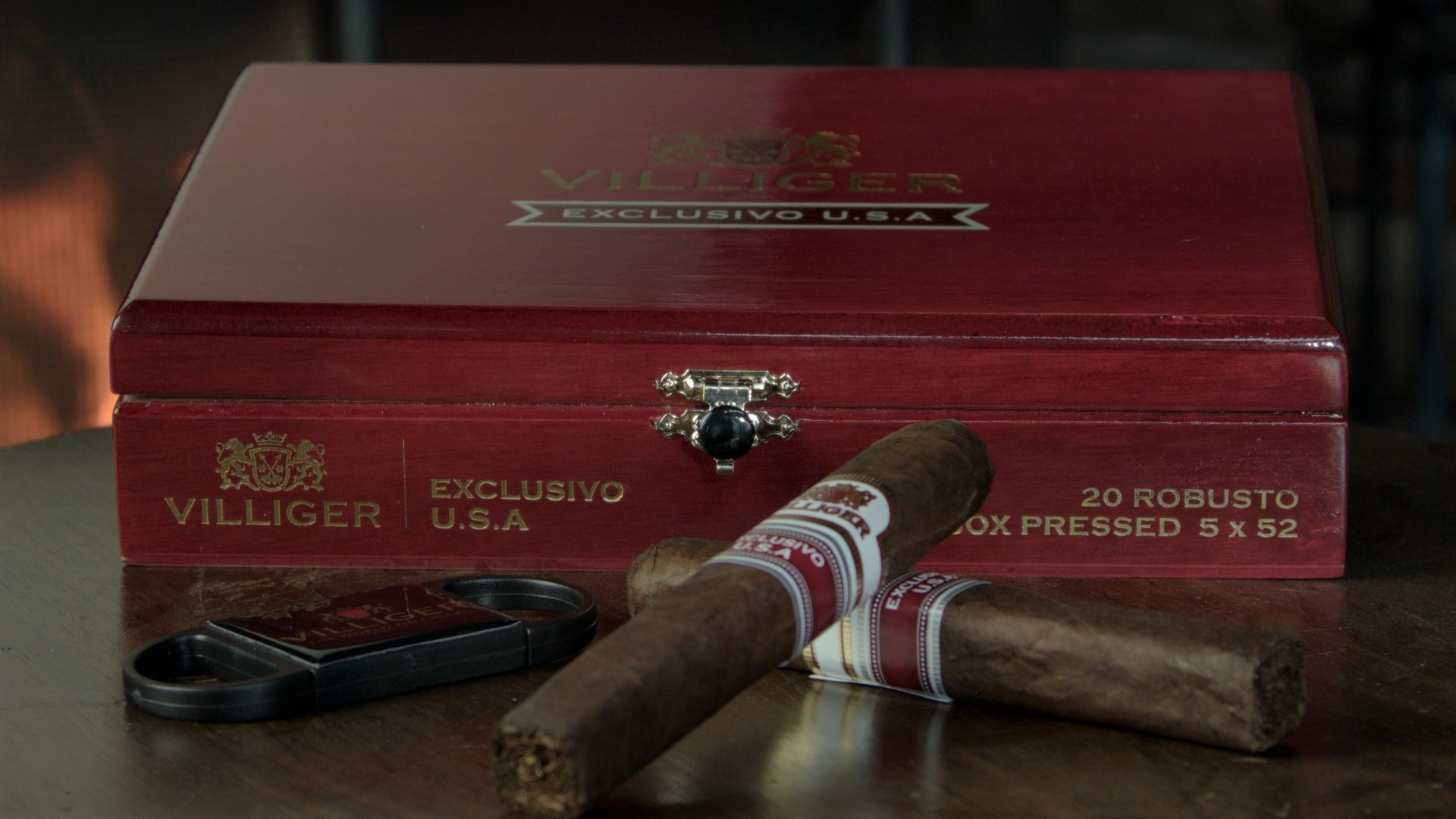 Presented in boxes of 20 cigars and singles

Construction: Appealingly dark, slightly oily – there’s a rosado look to the wrapper when the light hits it right. The soft box press has a little give.
Draw: Draws fine, maybe just a bit on the loose side.
Pre-light flavor: Nuts, earth, slight spice, and hay.
Toasting & Light: Charred wood (think campfire) and earth, almost a mineral taste.
Base flavors: Sweet, earth, pepper, spice; cedar and darker flavors past halfway.
Retrohale: Crisp spice, slightly floral.
Aroma: Woody and pleasant – even my wife said it smelled nice.
Burn & Ash Quality: Grey ash with a good-enough burn; I touched it up once and it was fine. 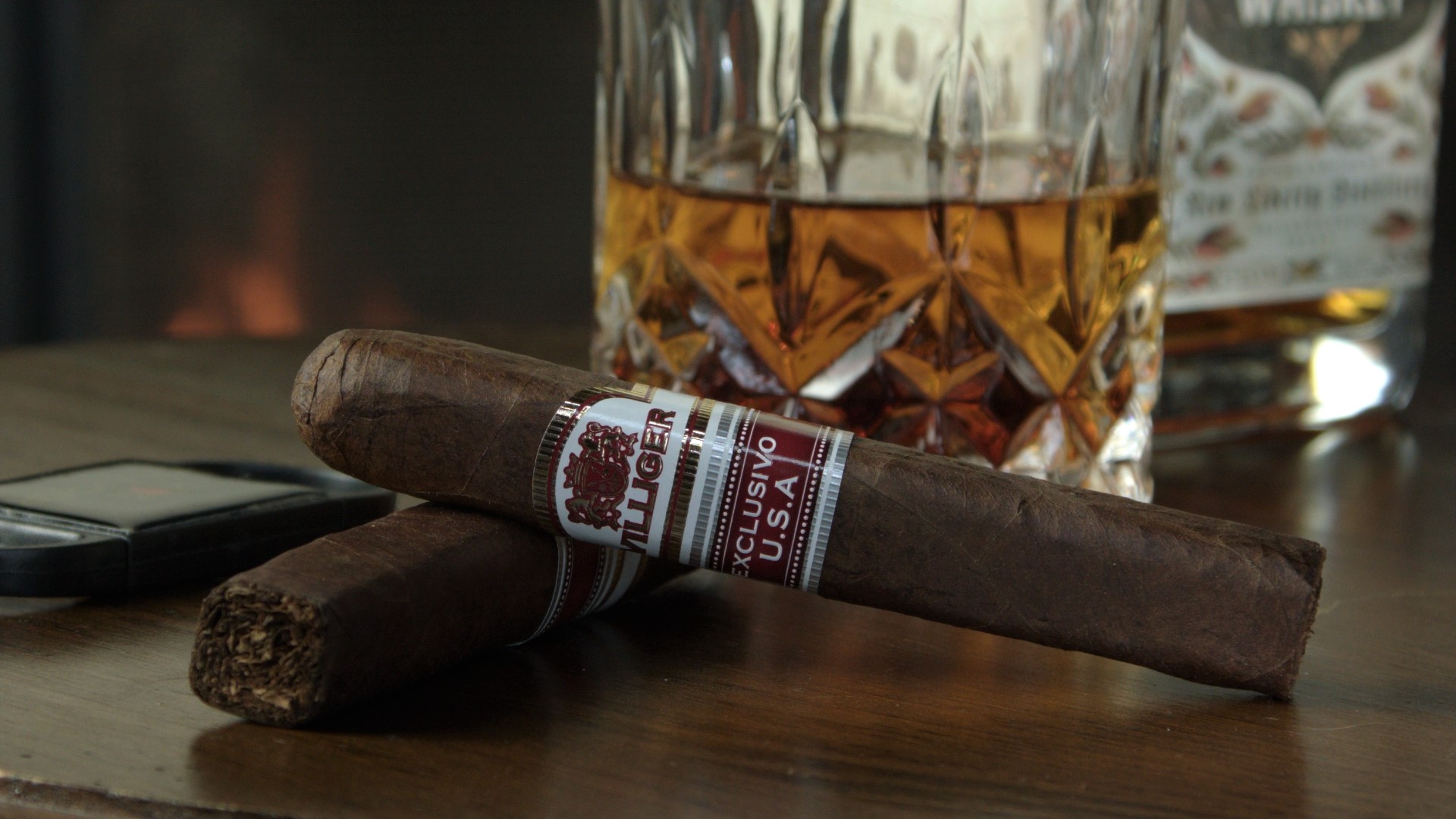 First: the beginning half is toasty, and all about this dry, slow-building sweetness I described in the video…pretty soon I realized, it’s cocoa. And then it gets a little more sweet – it’s on your lips now, too – and it tastes like graham cracker. A slow and sweet bloomer, it builds a bit more, then stops at halfway. That’s all the notable sweetness you’re going to get out of it.

Then comes the second half. This part of the cigar is distinctly darker and heavier in flavor: cedar, leather, and earth, along with some more exotic stuff like fennel and tannins. There’s even a hint of cinnamon red hots. If I were to be bold, I’d say it’s almost a little Serie R-ish (which makes sense, given the EPC connection). 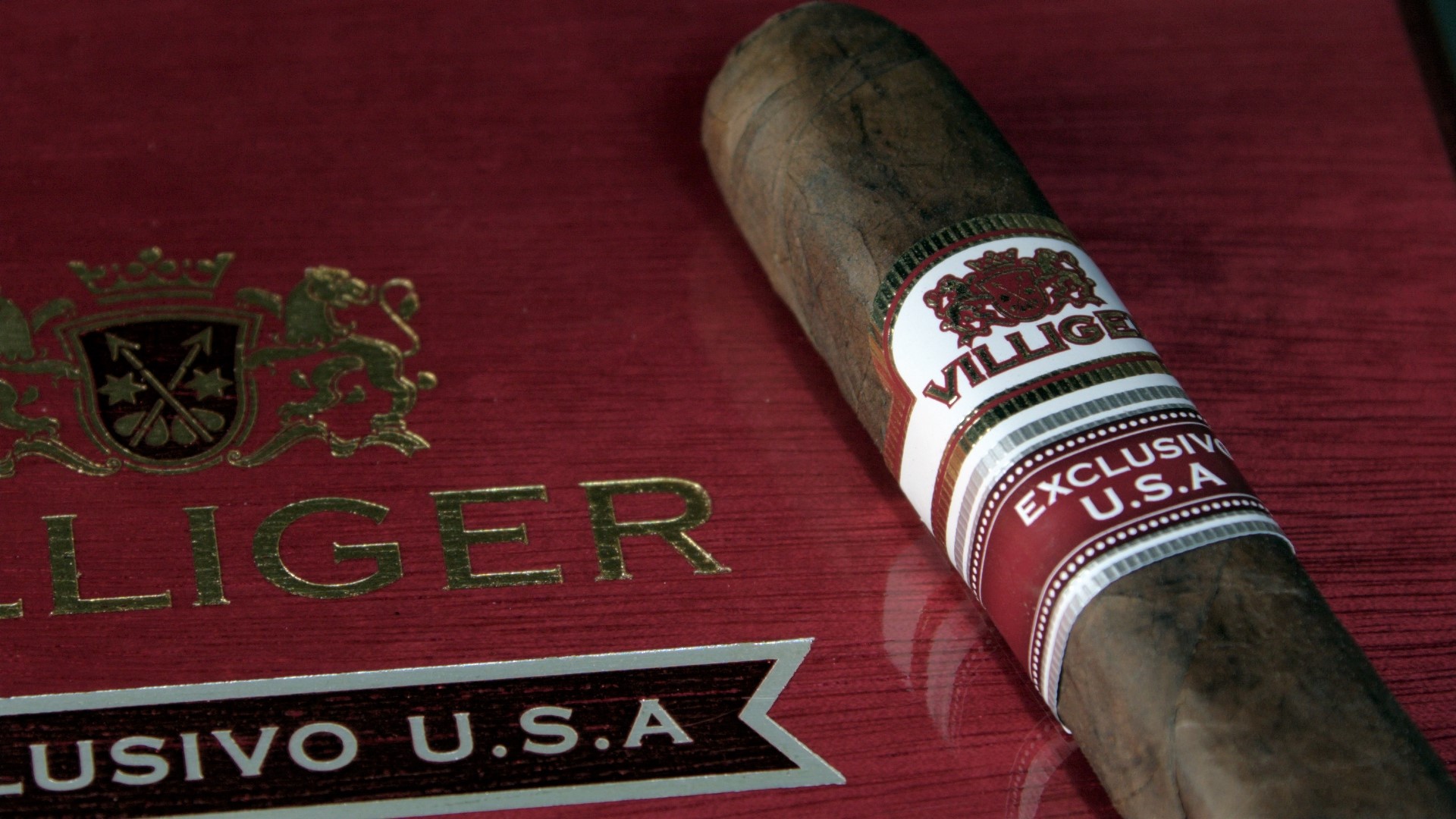 Don’t like box press? The shape isn’t that pronounced, so you’ll be fine with the mouthfeel. The bigger story is the flavor: it’s very complex, and you can tell where the transition happens. Almost like Ernesto said to himself, “Let’s make things interesting right about….NOW” and he grabs the flavor wheel, and yanks it for a big spin. Price, well, I have a feeling you’re either going to love this cigar or you’re not, no matter what the price. Whether you “love it” or “leave it” will depend on you, and if you’re patient enough for this Villiger to show you its suddenly flavorful surprises.

Construction: Looks like smooth, aged leather with a firm roll and a sturdy cap.
Draw: Very nice – a tad firm (the way I like it).
Pre-light flavor: Reminded me of wheat bread with a little bit of earthiness behind it.
Toasting & Light: A little bit of pepper, but very clean on the palate.
Base flavors: Dark wood, grass, charred toast with a medley of sugar, salt, and leafy greens toward the end.
Retrohale: Here’s where I found most of the pepper – especially on bigger draws through the nose.
Aroma: Reminded me a little of hot chocolate.
Burn & Ash Quality: Mostly consistent in the burn with a whiteish-grey ash. The last two inches went haywire a bit, but it wasn’t game-breaking.

Rare doesn’t always mean expensive. Villiger USA Exclusivo’s limited run of just 500 boxes of cigars comes in under $100 bucks for a 20-counter at press time. A big deal – especially when Ernesto Perez-Carrillo had a hand in both blending and rolling. You know…the guy who’s had the #1 Cigar of the Year in two of the past three years.

USA Exclusivo’s pre-light tasted kind of like wheat bread. Wasn’t expecting that, but pleasantly surprised. Lighting the cigar gave way to a quick shot of pepper from smoke that was thick and smooth. Result: a very inviting first few puffs. 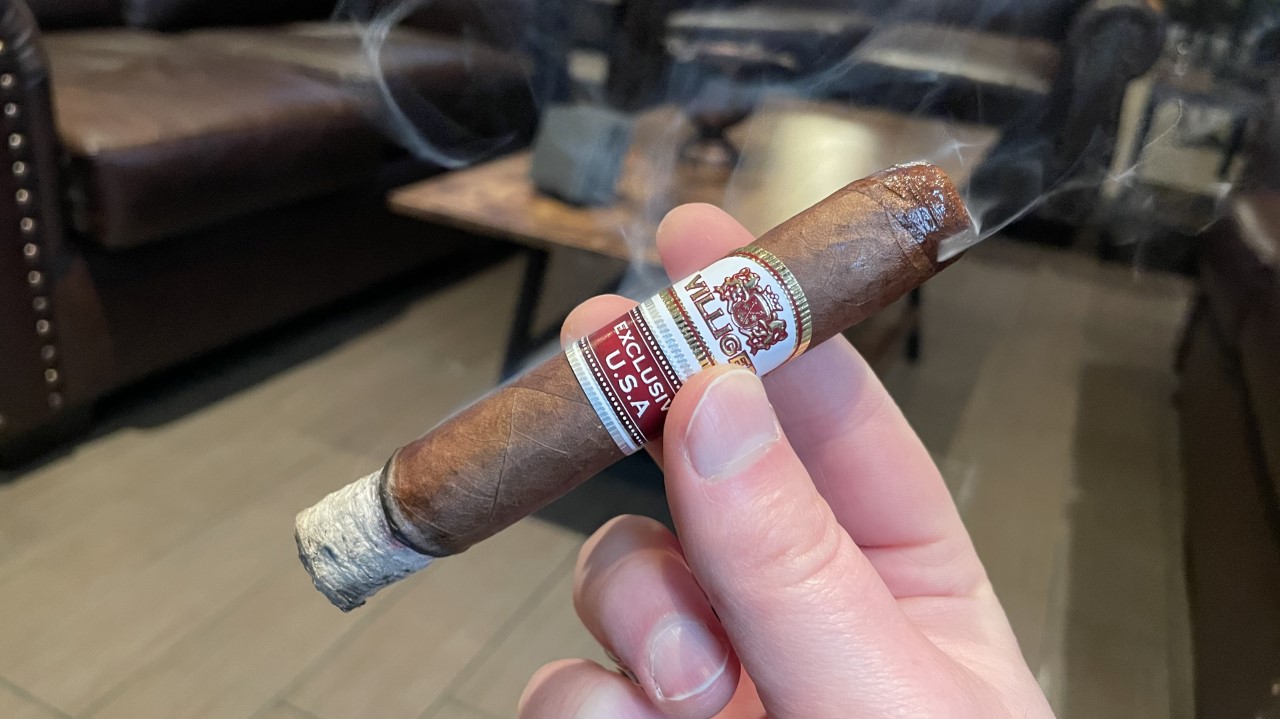 The initial pepper soon faded out a little and made way for the cigar’s two primary flavors in the first half – dark wood and charred toast. I wasn’t big on the charred note, but I didn’t feel compelled to set the cigar down because of it. To help keep me interested, fleeting flavors like coffee or leather would pop in for a few minutes, but the profile kept a steady pace until I got closer to the band.

The second act was more enjoyable to my palate. The charred toast was gone and in its place were hints of sugar and salt, leafy greens, and earth. Plus, a metallic, almost alkaline-like flavor that my compadres felt was closer to citrus. 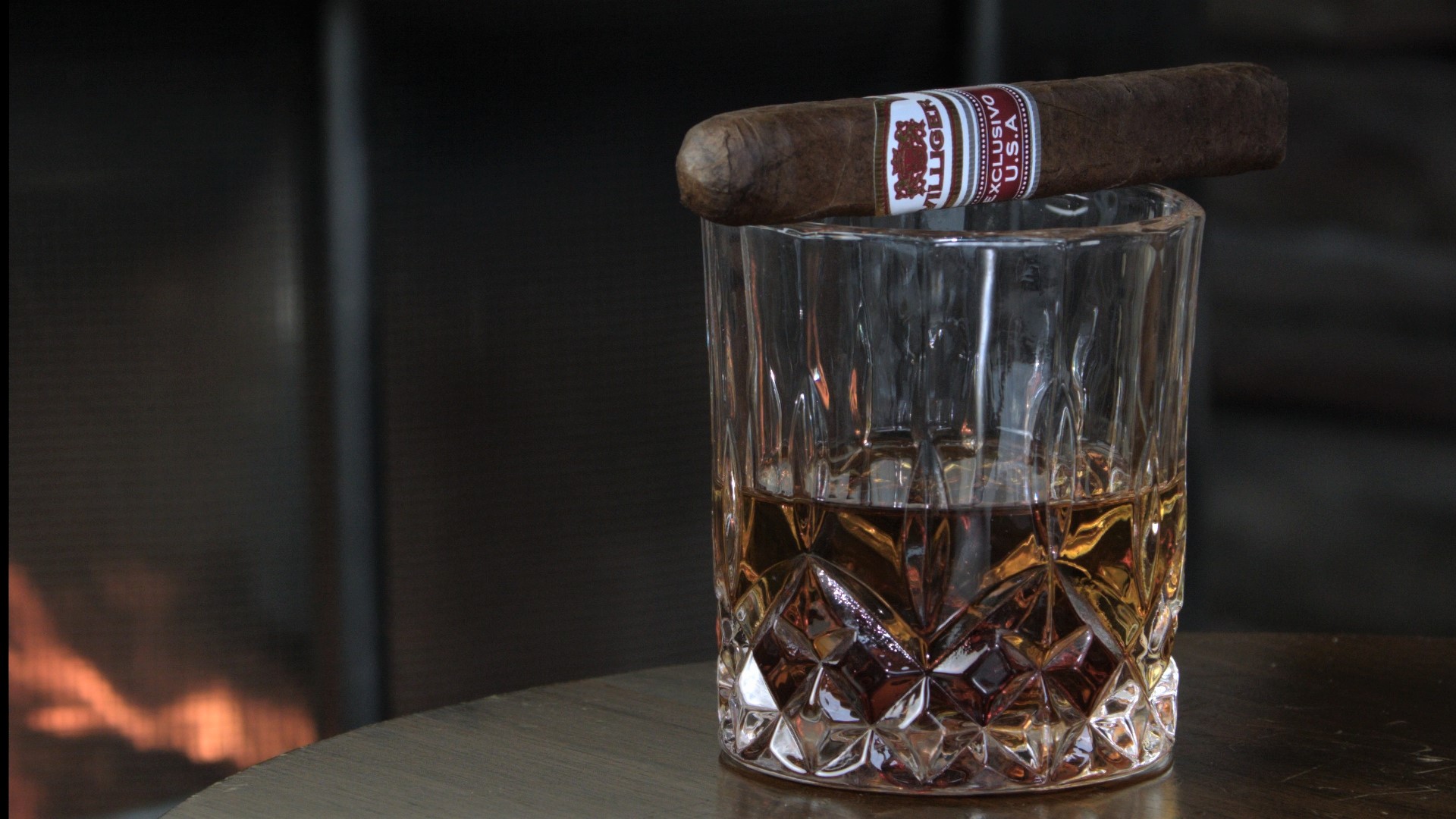 My sample ended with some canoeing. Nothing super serious, but it happened, so I’m telling you about it. Additionally, the smoke at the end was a little more peppery, thicker, and velvetier. Peppery and smooth are a great combo. So…who’s it for? Villiger USA Exclusivo is a solid medium-bodied cigar with a lot of value behind it. Ernesto’s known for his love of Sumatra leaf, and this is an excellent way to treat yourself to his blending talents without breaking your piggy bank.

Construction and Overall Appearance: The wrapper has an attractive reddish tint and an oily surface. The cigar is neatly pressed and pretty well packed, too. The cap is a triple seam and was just a little bit lopsided on my samples, yet clipped neatly. The wrapper also had a sweet hay aroma.
Draw (airflow): I found it to be a little too loose on my first sample, and much better on my video sample.
Pre-light flavor (cold draw): Sort of herbal, almost flowery, and a little bit sweet.
Toasting & Light: The opening notes were mostly earthy, flowery, and peppery.
Base flavors: Mineral, black pepper, tart fruit, charred wood, espresso.
Retrohale: Black pepper, which was more dominant in the early stages.
Aroma: Sharp.
Burn / Ash Quality: Both samples exhibited an even burn with a firm ash.
Balance of flavors: Some flavors were a little more dominant at times, but for the most part they were very good.

The fact that the Villiger Exclusivo USA Robusto is an Ernesto Perez-Carrillo blend is reason enough to try this cigar. There seems to be no limit to Ernesto’s resourcefulness, and so, here’s another example. 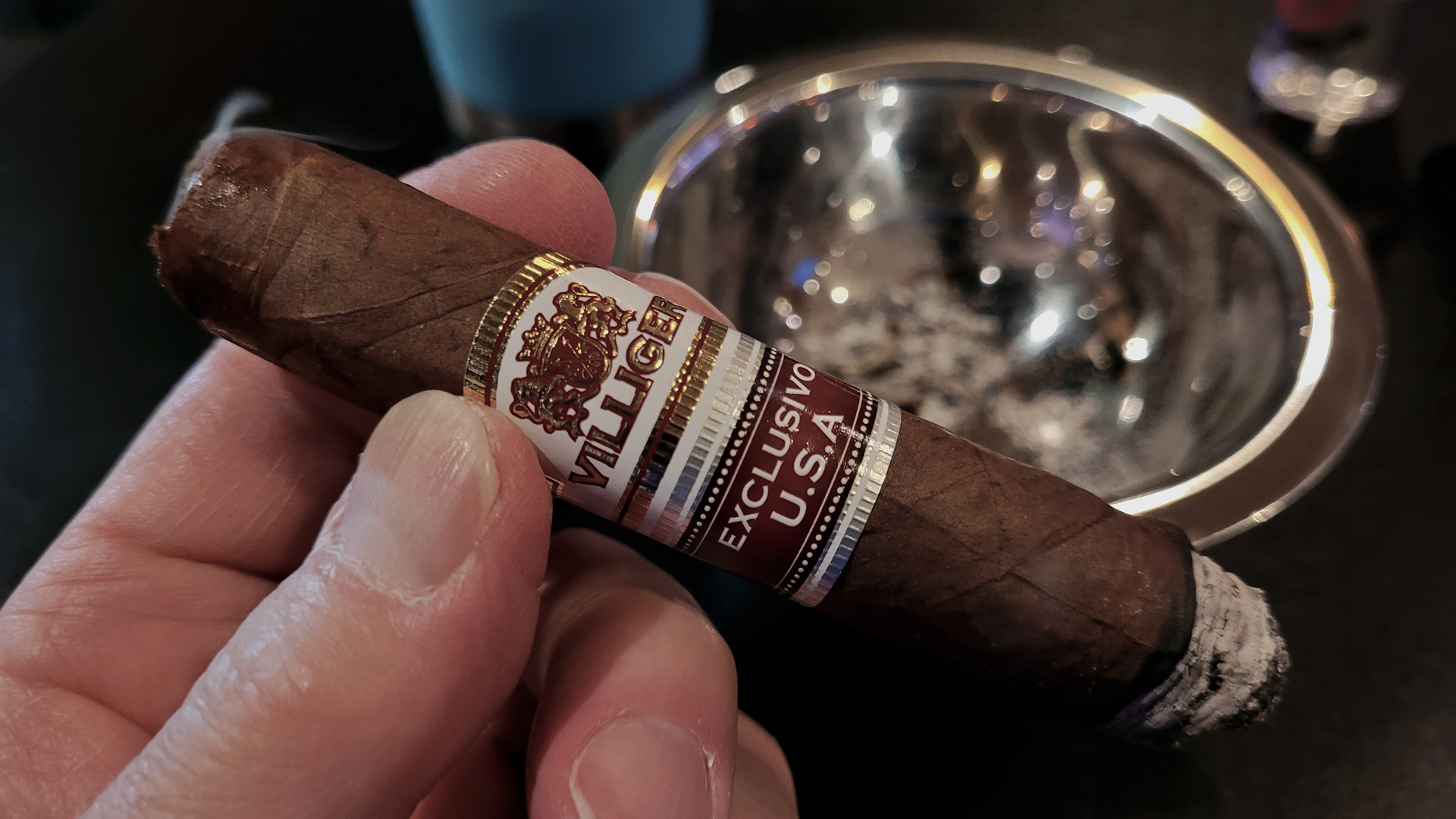 The Exclusivo USA starts off with a bit of a bang; earthy, almost loamy, peppery, and a bit charry with a medium-plus body. There’s also plenty of chewy smoke that flows easily from both ends. By the first inch a tart, unidentified fruit note enters, and the cigar seems to be pulling itself together. I should also note that the difference in the draw between my two samples had a significant effect on the overall profile of this cigar.

The cigar has an impressive burn, but as Act I comes to a close, Act II continues to churn out a bittersweet mix of loamy elements, tart fruit, seared wood, and black pepper. It’s in the latter stages that this cigar reveals more. An occasional hint of sweet tobacco leaks in, then espresso. It’s starting to get more interesting. Shortly into the final third, the body is approaching its max volume—medium-full. The nub stage was a bit too bitter for me on the first sample, but less so for the cigar I smoked in the video. 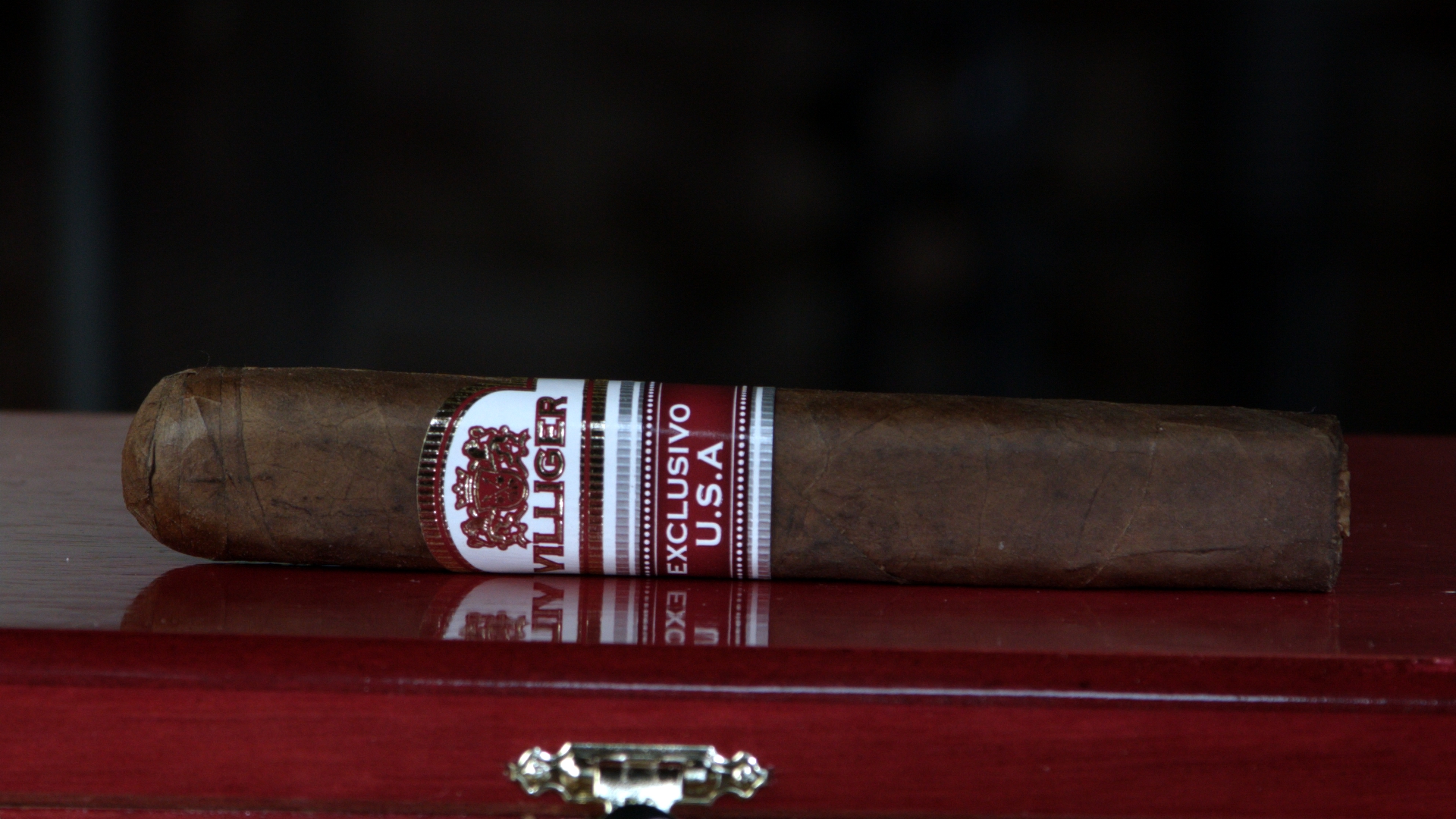 Suffice it to say. . . I think the Villiger Exclusivo USA is a good pick for smokers who like full tasting cigars with an ample amount of spice. I’m even venturing a guess as if there might be a piece of medio tiempo in the mix. More experienced smokers will probably get the best read from this cigar. I also believe this cigar will improve tremendously with a little extra down time; something like 3 to 6 months  and even longer.