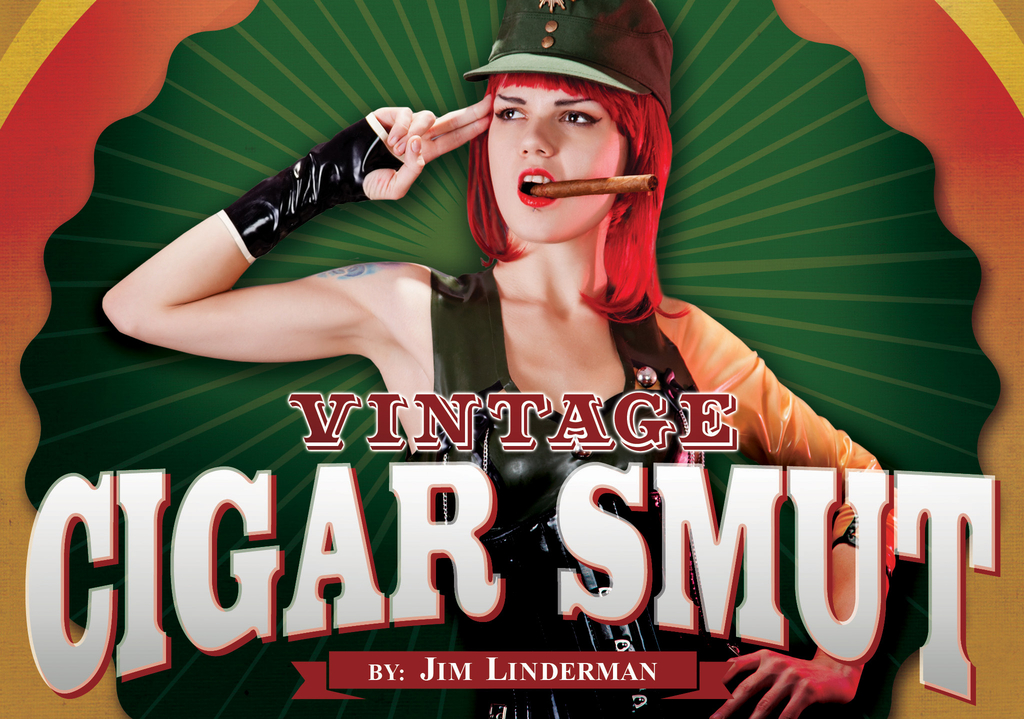 That most manly of objects, once a mere stogie, now associated with dark wood and leather mission furniture, however, still shaped like a you-know-what and placed within the lips. Without stating the obvious, there ARE times when a cigar is more than just a cigar. Freud, the father of psychoanalysis, may have thought the cigar was ALWAYS more than a cigar. He posed leering into the camera holding one as if to dare your disagreement. Certainly nonsense, and truth be told, many of us are carrying stubs rather than 60-ring parejos. Still the myth persists. No one attributes such nonsense to the pipe, as the word “stem” is more frequently applied in plural to the gender which shaves theirs.

When the world’s most famous fetish model, Dita Von Teese, poses with a cigar, is she really smoking it or simply covering all fetish bases in her quest to replace Bettie Page as the most recognized fetishistic pin-up model of all time? There are those with a particular quirky love for cigars and unclad women, but then I suppose there is a fetish for virtually everything.

One example from the extensive list of same (generally no longer falling into the category of socially deviant, but a mere “personality disorder” in the Diagnostic and Statistical manual of Mental Disorders), is the hapless fellow who reported an exhaust pipe fetish. You can look it up. I did and was astounded, since the list is 549 deviant disorders long.

My own personal list of fetishes seems to go no further than the 1950s joke that went, “I’d no rather smoke a filter cigarette than nibble a knocker through a nightgown;” and even then I am usually quite happy with either. . .knockers, that is.

You will not find a picture of foxhole filly, Bettie Grable, smoking a cigar, though she did do Chesterfield cigarette ads. Things were less overt during the glory of those woebegone days. . .and while pin-up art was virtually invented for army foot lockers and duffel bags, World War II pin-ups may have been smoking hot, but they were not generally smoking cigars. Churchill smoked cigars but, “What you are fighting for back home,” women did not smoke cigars-that was taboo.

During the Great Depression, Bonnie Parker smoked a cigar. She also held a gun and raised one leg to the bumper of a getaway car. That is triple filthy for the 1930’s female, and despite her “less than Faye Dunaway” (who played Parker in the movie) looks, she not only became the first notable woman sprawled over an automobile, she became an early symbol of female rebellion. Bonnie was famous enough to be satirized by those dirty little eight page cartoon booklets known as “Tijuana Bibles” along with the most recognizable celebrities of the day.

As far as I know, the only other prominent criminal of the time who earned his own Tijuana Bible was John Dillinger, a fellow who reportedly had a considerable “cigar” of his own. . .and not only the one allegedly residing today at the Smithsonian in a pickle jar.

It is easy to find a pin-up smoking a cigarette. Mara Gaye, burlesquer and risqué clothing entrepreneur of the 1950’s, reenacts the familiar, “My doctor told me to stay away from cigarettes” gag. Want another smoking gag? The clever vernacular version of the slogan, “L-S-M-F-T.” You’ve heard it if you are my age or older. If you haven’t, time heals most things, including particularly bad jokes. That is one no one will miss.

Finding a photo of a pin-up with a big fat cigar is only as common as seeing a woman eating a banana in public without breaking off bite-sized portions. Playboy did it in 1973. The tobacco marketers did it often to sell their own products like Tiparillos and Don Diego cigars. The first may have been the charming Blackstone ad, which provides considerable pleasure in “every size and shape” while lasting longer. The ad copy reads like a Kinsey Report. The unnamed woman above did it in a Robert Harrison pulp novel in the 1950s, but I have only been able to locate her from a scrapbook assembled by a person obsessed with stockings. . .the cigar was a bonus. Robert Harrison was responsible for publishing the entire top rack of girlie magazines like Tittter, Beauty Parade, Eyeful, Wink, and Flirt. Harrison would use ANY phallic shaped object he thought he could get away with; a candle, a cane, even the carrot of a snowman. He also frequently appears in the layouts along with underwear-wearing “movie stars” and retired burlesquers.

In 1955, the Baltimore District Attorney broke-up a considerable “dirty picture” racket that distributed two million photographs a year. It is no coincidence among the 291 shipments tracked, a considerable number went to the “Washington Dukes Cigar Stand” in Durham, North Carolina and “City Hall Cigar and Novelty” in Grand Rapids, Michigan.

Jim Linderman is a contributor to Cigar Advisor Magazine.

Read More
Food & Drink
Want to learn how to make a Dark and Stormy cocktail? Here’s our house recipe – along with a special cigar pairing from Oliva that will make this drink shine. Get the recipe and see how it’s made, with our simple Dark and Stormy drink instructions!
Read More