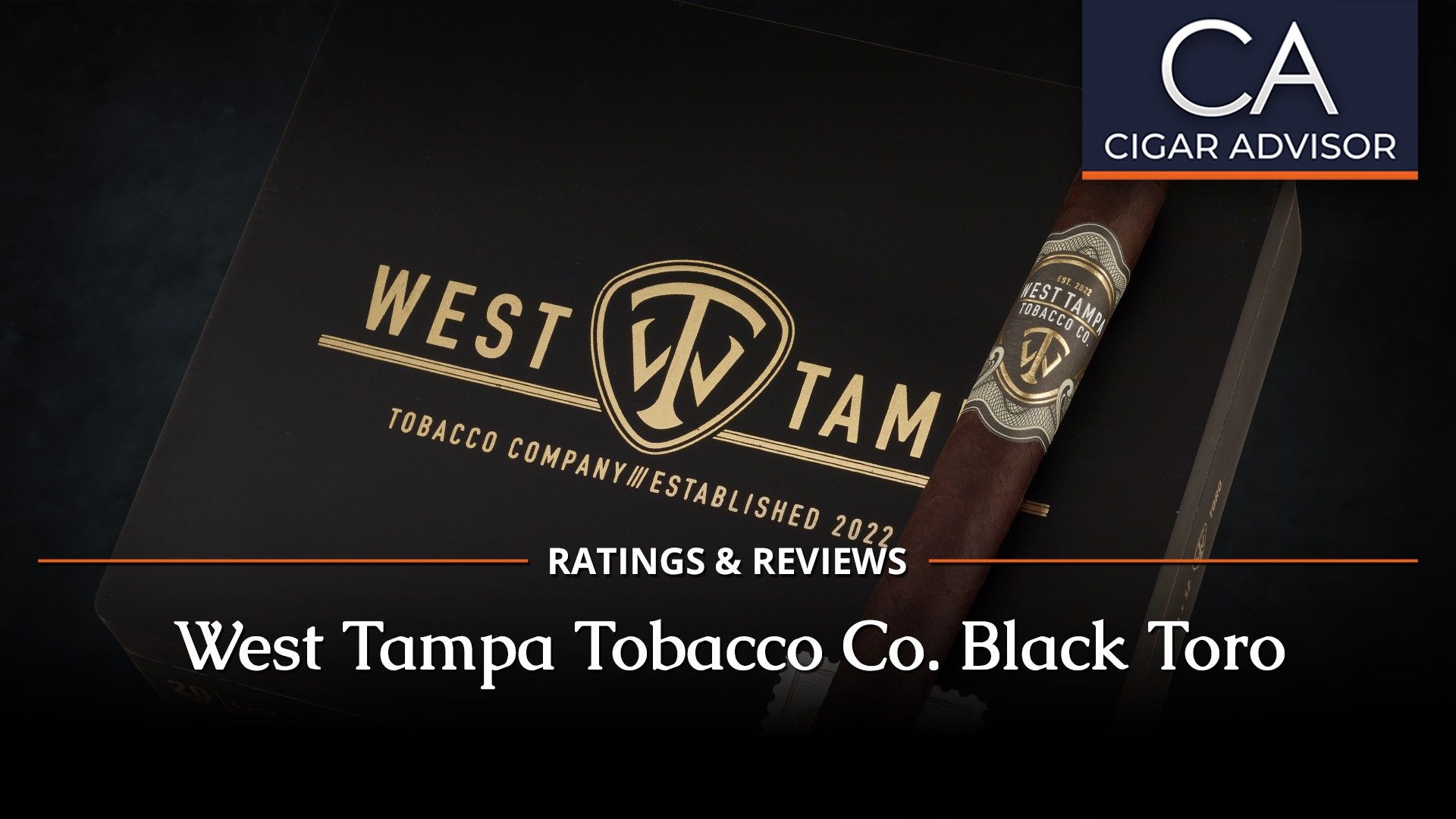 A recent trend in the premium cigar industry finds one-time employees branching out and starting their own cigar brands. Steve Saka formed Dunbarton Tobacco and Trust after departing Drew Estate, as did Nick Melillo with Foundation Cigar Co. Both John Huber and Mike Conder worked at CAO prior to forming Crowned Heads, and recently Ferio Tego was launched by ex-Nat Sherman alums Michael Herklots and Brendon Scott.

Go ahead and add another new brand to that list with West Tampa Tobacco Co—helmed by ex-CAO blender and ambassador Rick Rodriguez and Gus Martinez, formerly of General Cigar. With 2 exciting blends—White and Black—available right out of the gate, West Tampa Tobacco Co. hit the ground running. 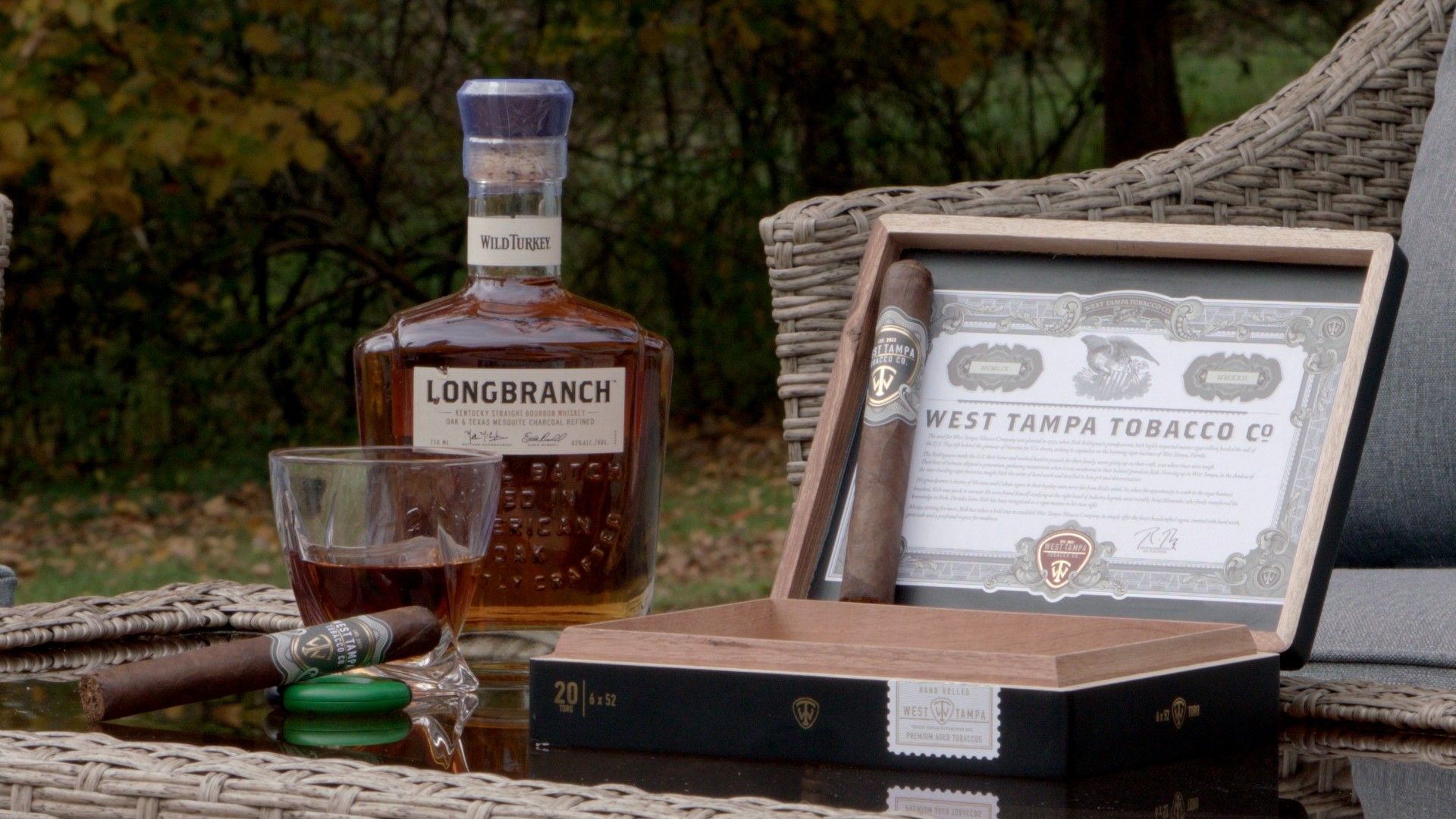 Although a new venture, the company’s inspiration can be traced back nearly 70 years to 1953, when Rick Rodriguez’s grandparents—both master cigar rollers—left Cuba and put down roots in West Tampa, Florida. It was their stories of the glory years of Havana and Cuban cigars that awakened Rick’s desire to honor tradition and make cigars the right way—with hard work and respect for tradition.

Black is billed as the richer and more complex of the two West Tampa blends and features an Ecuador Habano wrapper taken from a high priming, making it darker and more potent. The blend is completed with a Nicaraguan binder from the volcanic soils of Ometepe, and Nicaraguan long fillers from Condega and Esteli.

Check out our reviews below to see what we think, and of course, add yours if you’ve smoked it in the comments below!

Summary: I thought I knew what I was in store for. After all I was familiar with, and enjoyed many of, Rick’s previous blends while he was with CAO. Spoiler alert: I was surprised.

Now it’s only a guess—but West Tampa Black struck me as the type of cigar Rick’s longed to make throughout his career. It seems like a cigar made his way and stands apart from his many, best-selling CAO blends.

West Tampa Black begins with a heaping helping of black pepper with earthiness on the side. Volumes of thick, creamy smoke issued forth with each draw and at about an inch and a half in, coffee and charred oak enter the mix. The cigar begins at medium plus and gains in body and strength throughout, ending in full bodied territory. 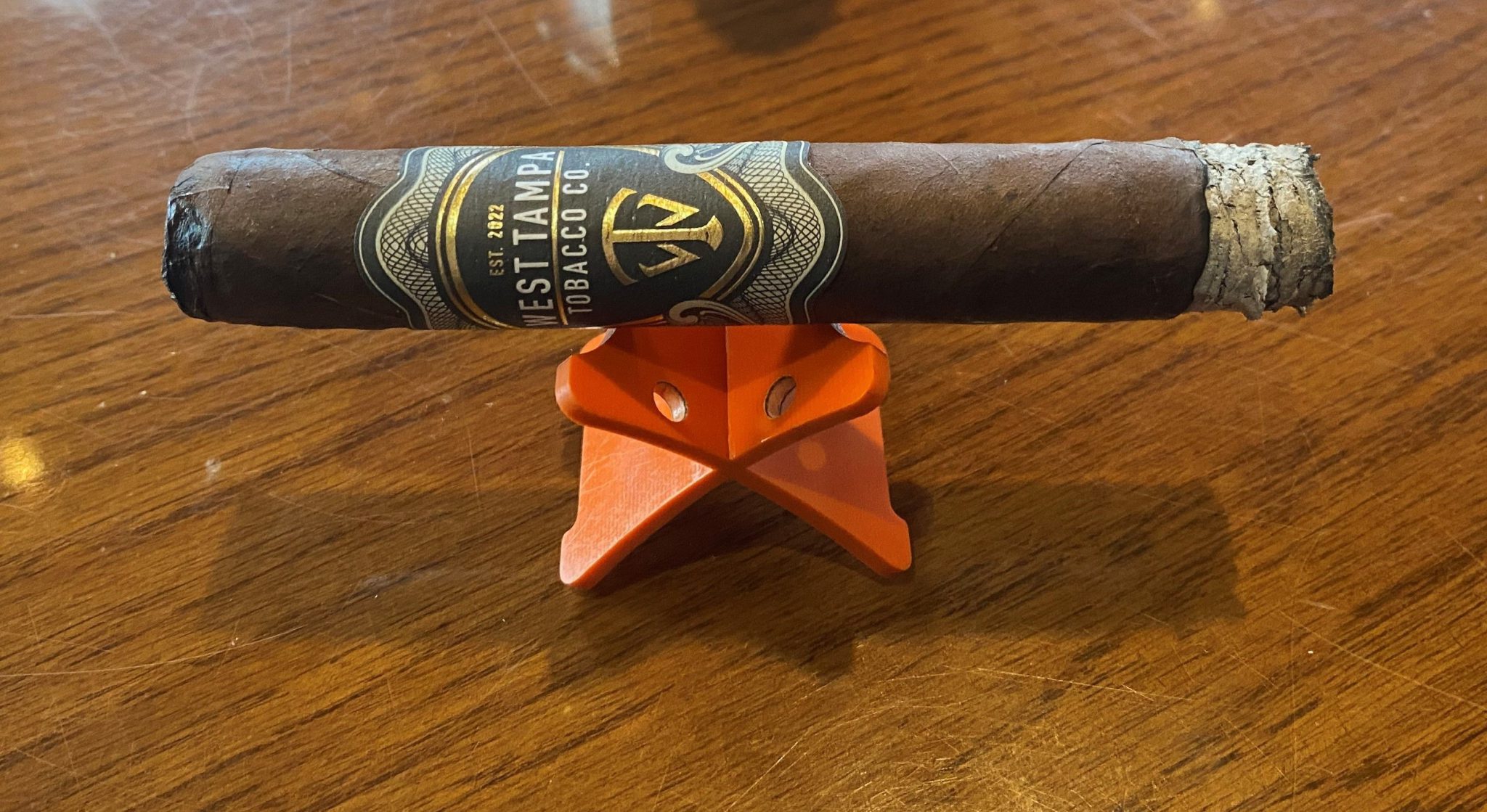 Flavors are consistent and rich, with the addition of nutmeg, chocolate, leather, and a dark cherry sweetness rounding out the profile.  Construction has been spot-on with a flawless burn and dense, grey ash.

As I mentioned in the video, while some cigars are overwhelming and some are underwhelming, I found West Tampa Black entirely ‘whelming.’ That’s my way of saying it’s a cigar smoker’s cigar—one that has enough complexity to keep you interested, strength without buckling your knees, and that’s priced at a level that’ll keep you reaching for more.

Construction: Wrapper has a coffee bean-brown color; a little oily, a little veiny, and firm to the squeeze.
Draw: The draw has some fight to it, but produces enough smoke to get the picture.
Pre-light flavor: Taste is leather and cocoa powder; smell is a little leathery too, with a strong hint of tea that’s been ground for brewing.
Toasting & Light: Loaded with coffee, dry earth and oak. Subtly sweet, with a hint of spice.
Base flavors: Creamy sweet, cocoa, earth, leather, oak, spice, pepper.
Aroma: Oaky – but very pleasant.
Burn & Ash Quality: Salt & pepper ash, mostly straight burn, compact ash.

Summary: Some Habano wrappers hit with a tangy taste – think black cherries, or even citrus. Even though this is a high-priming Habano, the first half of the Tampa Black Toro is sweet, lush and thick: heavy with the same kind of sweetness as a cup of coffee with a lot of creamer, plus a bit of pepper. The smoke is plenty dense with a super-long finish, and that’s building up its own little tingle of spice, too. The body is actually pretty oversized compared to the strength, which starts out closer to medium. During the second half, both body and strength really come into their own: those growing sensations of spice and pepper have moved in to fully occupy the taste buds, pushing out the coffee in favor of leather and a dry earth, almost stony sensation. Let’s call it “hardy.”

It’s almost impossible to talk about Rick Rodriguez without mentioning CAO as a point of reference – but at the risk of making it awkward by talking about our ex’s, I’ll make the comparison quick: the blend, and even the band design, has nothing CAO-ish to it. Ricky’s new cigar is a full, creamy-sweet and very flavorful smoke that goes through a huge transition at halfway; so if you enjoy a cigar that ramps up to finish with a spicy bite, you will love this Tampa Tobacco Black.

Summary: When Rick Rodriguez left the cigar industry earlier this year, he did so through a revolving door. The ink hadn’t even dried on his resignation from CAO before he opened the doors to West Tampa Tobacco Company. What can you say, BRO?! Cigars are in the man’s blood!

West Tampa Tobacco Black is a dark natural; a departure from Rick’s love of the Maduro. But only slightly. Additionally, the blend has a bonus Ometepe binder not found in the White blend, giving the cigar an extra layer of earthy complexity. And phew…is it ever complex! From start to finish, West Tampa’s Black label is a rollercoaster of flavor. Coffee, fruit, pepper, spices, earth, chocolate. They just keep coming! Here’s my cigar review play-by-play:

First third: A heady, full-bodied assault of pepper and spices from the first few puffs dissipates to reveal a layer of dark roast coffee—maybe even espresso—with hints of sweet tobacco and earth. 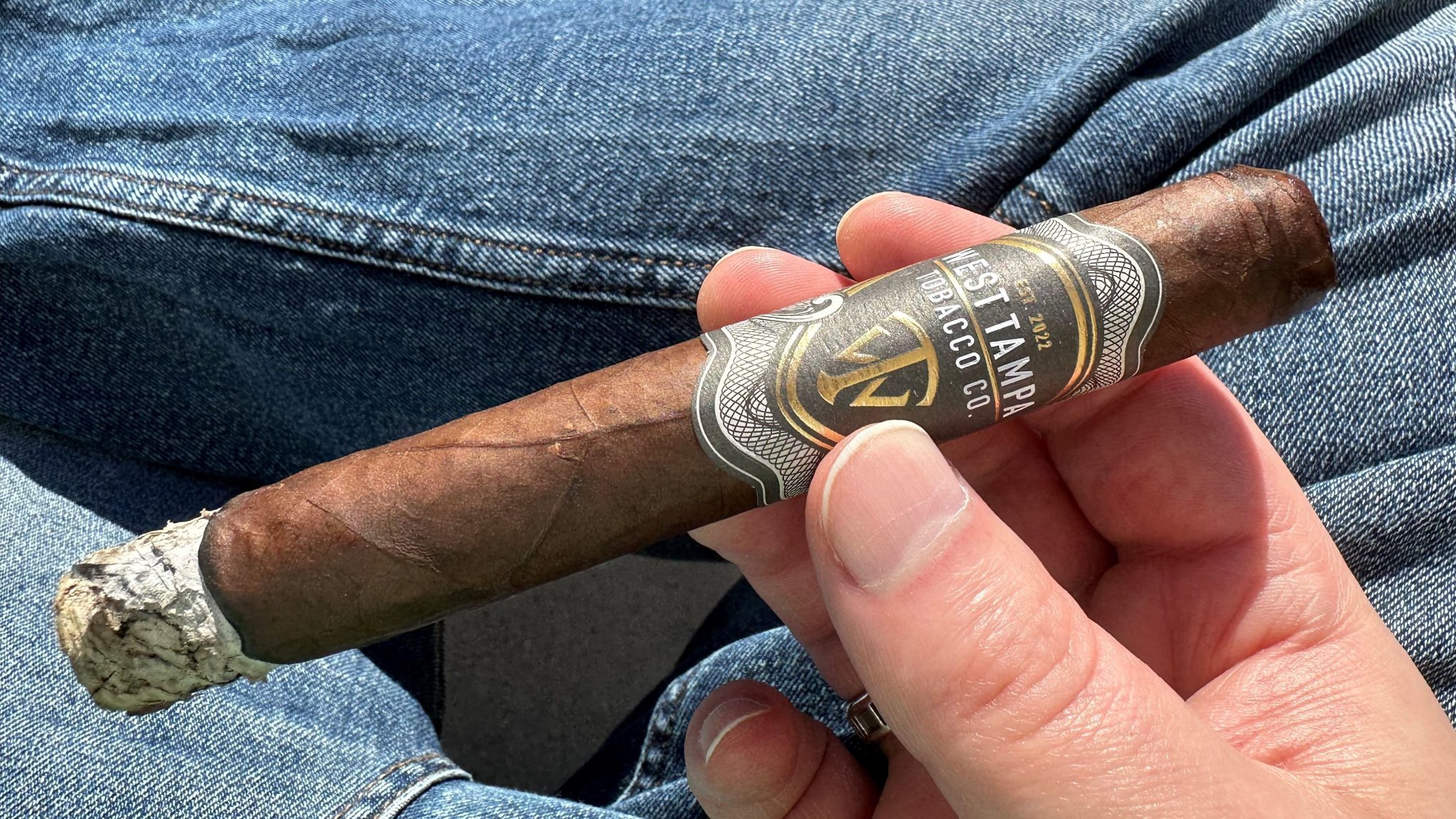 Second third: More sweetness. Reminds me of a thawing mug of hot cocoa…like when you add more than one packet. There’s also a subtle cherry flavor that borderlines on other types of fruit I can’t put my finger on. Red peppers have returned, though not as intensely as the start.

Final third: Earthier, and spicier now (but not as peppery). Lots of cocoa notes still in the fray, but less sweet like baking chocolates. Coffee is sticking around, too, but it’s also milder in intensity.

Overall, I’m a fan of West Tampa Tobacco Black. It’s all-in on flavor without doing the same to your piggy bank. With Rick’s industry cred, he could have gotten away with a steep box price. I’m just glad he didn’t! The cigars are quite different from what he’s done previously with CAO, and I’m happy to see him come out swinging.

Medium-plus in body at the midsection. Baking spice notes appeared. The smoke was a little earthier and less sweet, but the nuts and cereal flavor remained. With several inches remaining, the smoke was now full-bodied, yet remained medium in strength. 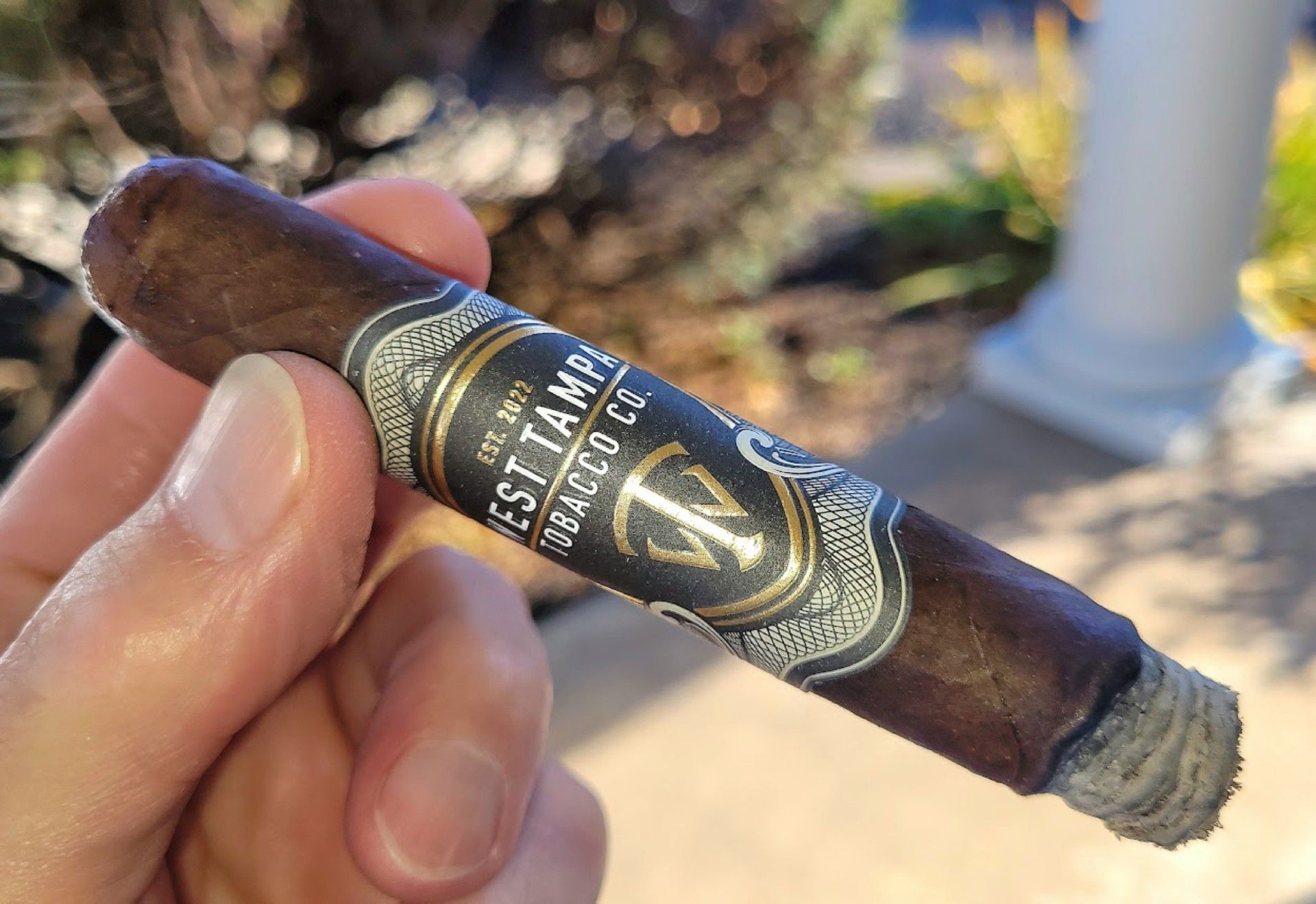 Much earthier in the final inches. No trace of sweetness. Some espresso added to the darker turn at that point. However, the few remaining flavors were still well-balanced, but I found the last two inches a little too murky.

There’s a dramatic difference between the West Tampa White and the West Tampa Black. The Ometepe binder and Estelí Ligero most certainly contribute to the bolder flavors in the Black. It also remined me of some of AJ Fernandez’s full-bodied blends. Considering its bolder character, the Toro stayed the course. So, for the cigar smoker who likes robust Nicaraguans, the West Tampa Black Toro should not disappoint.

Have always enjoyed his blends, will have to try.

Great review of this wonderful cigar. Always like watching you guys.

Reading Time: 3 minutes Just in time for July 4th celebrating, the annual limited edition Camacho Liberty 2020 cigar has arrived. Such a special cigar deserves a special episode, so all of the Cigar Advisors got in on this one. It’s quite different from past Camacho Liberty cigars, and so, this review also comes with some interesting surprises.