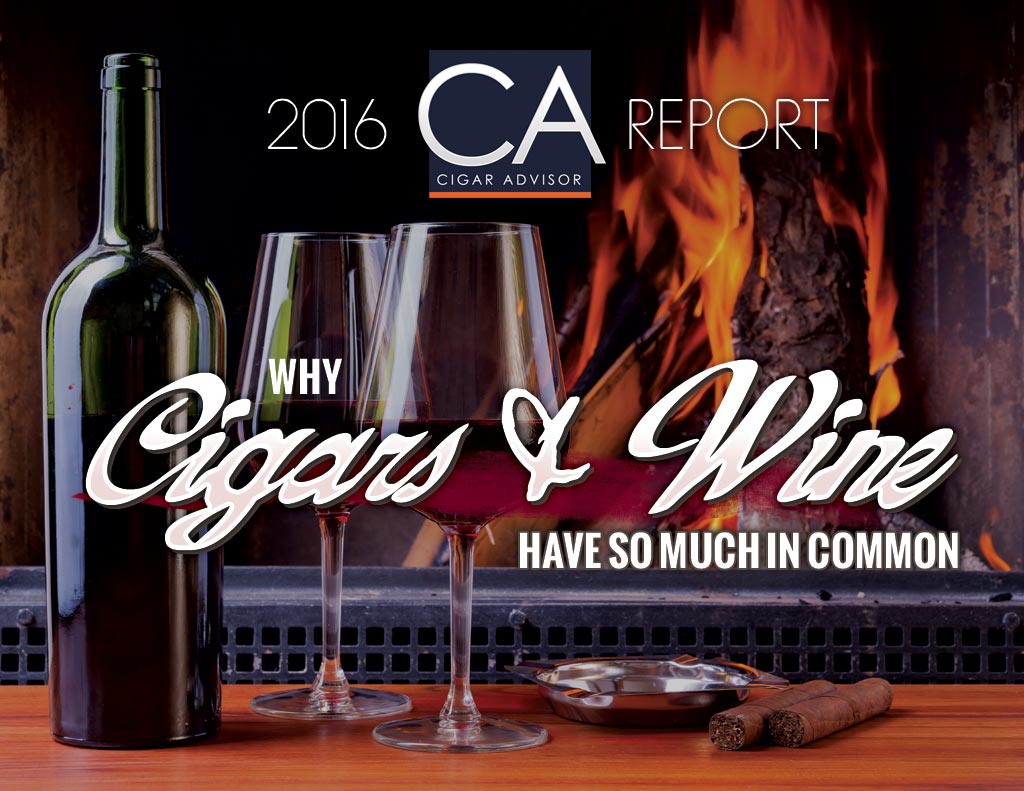 2016 CA Report: What Cigars and Wine Have in Common

Why Cigars and Wine Have So Much in Common – Or Do They?

Have you ever noticed that a lot of premium cigars have wine-like names such as “Reserva,” “Grand Reserva,” and “Grand Cru” on the band? In wine terms, these nomenclatures have to do with how the wine was aged. The question is, do these terms apply to how cigar tobaccos are aged and the reason they’re labeled as such, or is it merely a coincidence?

Regardless of the answer, a lot of cigar smokers recognize a unique connection between premium cigars and wine. Like wine grapes, the year cigar tobaccos are harvested, their overall quality, the curing, fermentation, and aging process, the color of the leaves; all of these factors play a part in the body, flavor and quality of the finished product, and in some cases, its price. And as great winemakers do with grapes, great cigar blenders know what they can expect from each tobacco harvest and which tobaccos will most likely offer the best flavor and aroma. The main difference is that, for wine, the contents of the bottle come from the same barrels or vats. For cigars, the tobaccos in a given blend may vary in age, not to mention that you have the filler tobaccos, the binder, and the wrapper leaf. Plus, there are a number of cigars that, like wine, have tobaccos that have been aged in oak barrels.

I recently discussed the similarities and differences between cigars and wine in a CigarAdvisor.com “Fan Mail” video.  But for this blog, I wanted to expand on my remarks by including more cigars – all of which I suggest you try – and a little more background on the topic.

In 1946, Zino Davidoff was one of, if not the first cigar merchant to market a line of premium cigars specifically named after France’s best Bordelais estates – the finest Premier Grand Cru Classé wines. It happened during a dinner with a delegation of Cuban cigar manufacturers who had come to Zino for advice on how to better market Cuban cigars in Europe. That same conversation also resulted in a contract to manufacture Zino’s first line of premium cigars. Just as Zino was ordering wine for the table, one of the men asked him what he was going to name them. With wine on his mind, Zino said that it would called the “Chateau Series,” and the cigars would be named Château Haut-Brion, Château Lafite, Château Latour, Château Margaux, and Château Yquem.

Of course, the names had more to do with Zino’s passion for French wine than the actual blends, but Zino was just as passionate about Cuban cigars, which, no doubt, made perfect sense to him at the time.

In November of 2006, Cusano Cigars created the Cuvée selection. The name was inspired by the term cuvée used for vintage French champagne. The cuvée are the first 541 gallons of grape juice, which are considered the cream-of-the-crop. Using that as a standard, Cuvée cigars were made with only the top 10% of the best Dominican tobaccos harvested annually by Cusano. The first Cusano Cuvée cigar was a lancero called the Cuvée Grand, and coincidentally, it was introduced in Europe. One year later Cusano released the Cuvée selection in three blends, Cuvée Blanc, Cuvée Rouge and Cuvée 151, to the American market. They’re no longer available, but who knows; with the new FDA regulations permitting premium cigars released before February 15, 2007 to be grandfathered, this line could have reboot potential.

Today, there are a number of excellent wines produced as blends. A blog in the Huffington Post titled, “5 Facts About Blended Wines for Beginners,” describes how varietals are used for making blended wines as follows:

Winemakers will often make a barrel of Malbec, Cabernet Sauvignon, Merlot or other wines solely for the purpose of blending. As the grapes are being harvested, a winemaker determines what they think will be the best formula for a blend. Allotting specific barrels for blending allows them to experiment in finding the best types of mixtures. The idea is to highlight each grape’s strength and complement the other grapes being used in the blend.

Sound familiar? Blended wines have the most in common with the method for blending premium cigars, but getting back to the naming of wine as Reserva, Grand Reserva, etc., the infographic below illustrates how these terms apply to varietals, specifically, Spanish Riojas.

Grand Cru is a term used for Burgundies that signifies the grapes were grown in the highest-quality vineyard locales, or terroirs. A terroir is defined by the growing conditions of the vineyard such as its climate, soil composition, irrigation, even the plot’s position on the slope and altitude. So for a Grand Cru, the quality of the wine is based on both the skills of the winemaker and the vineyard on which the grapes were grown.

Keeping the terms from the infographic in mind, let’s look at some cigars and see if we can surmise why they’ve been given these wine-like designations:

Starting with Crianza, Padilla Crianza cigars are the only premium line I’ve seen with that name. Made by Oliva Cigars in Nicaragua, its Estelí & Condega Nicaraguan long-filler core and Ecuadorian Habano wrapper issue an earthy-spicy, medium-full smoke. Frankly, I don’t really know why they named it Crianza. Maybe it just sounded classy. But like its wine counterpart, it’s likely that the tobaccos have been aged for at least two years.

For the Reserva, let’s look at the E.P. Carrillo New Wave Reserva Surpremo. It has a Nicaraguan-Dominican core rolled in a savory, high-priming Ecuadorian Connecticut wrapper that’s also darker in color than Connecticut shade-grown wrapper. The smoke is robust with lots of earthy, creamy, and spicy elements. Although there is no information on the year of harvest, if I had to guess, maybe they named it “Reserva” because the year of harvest was particularly good and only yielded so much useable wrapper leaf. These EPC’s have been out for a couple of years now, and have received some of the highest tasting scores, so they should be even more exquisite by now.

For a Reserva with a little more Nicaraguan swag, the Jaime Garcia Reserva Especial Toro has a deliciously dark, earthy, and sweet-spicy character. The Connecticut Broadleaf wrapper is delectably oily, naturally sweet and surrounds an all Nicaraguan core. As the story goes, this cigar made its first appearance in December 2009 at a special NYC event. Made specifically for the event in only one size, it didn’t have a name. However, it was so well received that Jaime decided to add it into regular production using his name and called it the “Jaime Garcia Reserva Especial.” End of story.

In the Gran Reserva category you’ll find the Gran Habano Gran Reserva Corojo #5 2010 whose blend consists of all vintage tobaccos. The fillers are vintage 2003 Estelí Habano ligeros, and 2004 Nicaraguan Jalapa Habano, while the binder is a vintage 2005 Jalapa Habano, and the wrapper is a 2005 vintage Jalapa Corojo wrapper. The smoke is remarkably smooth, earthy, and complex with notes of cedar, spice, and espresso. As for the “2010” on the band, in some cases that’s the year the cigars were rolled, so this cigar is quite deserving of the name Grand Reserva, and it might even qualify as a “Grand Cru” – in wine terms, that is.

Technically speaking, what might make the A. Flores Gran Reserva Corojo Robusto cigar a Grand Reserva is the wrapper, a rare 2006-vintage Dominican Corojo. As a result, these complex, full-flavored cigars were made in very limited edition of only 500 boxes. At its heart is a perfectly-balanced blend of Dominican Corojo and Nicaraguan Habano fillers with a Dominican binder. Released in 2013, you can imagine how good they taste now with an additional three years of aging on them.

In the Grand Cru category, you’ll find the Perdomo Grand Cru 2006 Epicure. Although this all-wide-body line is also made with Connecticut & Sun Grown wrappers, the core blend consists of a rare 2006 bumper crop grown in Nicaragua. After fermentation, the tobaccos were aged in Spanish cedar bins for an additional 9 months. So, in the case of this dark, earthy and delectably spicy “Grand Cru” cigar, it’s not so much the plot in which the tobaccos were grown, but the quality of that particular 2006 tobacco harvest.

And finally, we return to our old friend and wine lover, Zino Davidoff, with the Davidoff Grand Cru No.2. This Corona boasts the most specially-selected, perfectly-aged Dominican tobaccos rolled in a flawless Ecuadorian Connecticut Shade wrapper. The smoke is creamy and full-flavored with nose that’s as aromatic as it gets; well worthy of its “Grand Cru” label.

All of these are fine cigars. You might even want to try smoking them with wines of the same classification just to see how well they pair-up. Truth be told, although premium handmade cigars and wine and have much in common, in some ways they’re entirely divergent. For wines, the classifications are very strict. For cigars, it can be the length of time the tobaccos were aged, the quality of the tobaccos, or the rarity of the wrappers. That said, just as cigar makers come up with different names for similarly shaped cigars, it may just be that these cigars are named “Reserva,” “Grand Reserva,” etc., at the manufacturer’s whim because it gives the cigar a certain air of individuality or exclusivity.

Well, that’s my take. If you’ve got some facts or ideas of your own that you can add to the subject of cigars and wine, please leave a comment. If you’re a cigar manufacturer, I’d like to get your take on this, too.
Check out the Cigar Advisor Flavor Wheel to help you decipher flavor notes in your cigars – Download it for FREE!