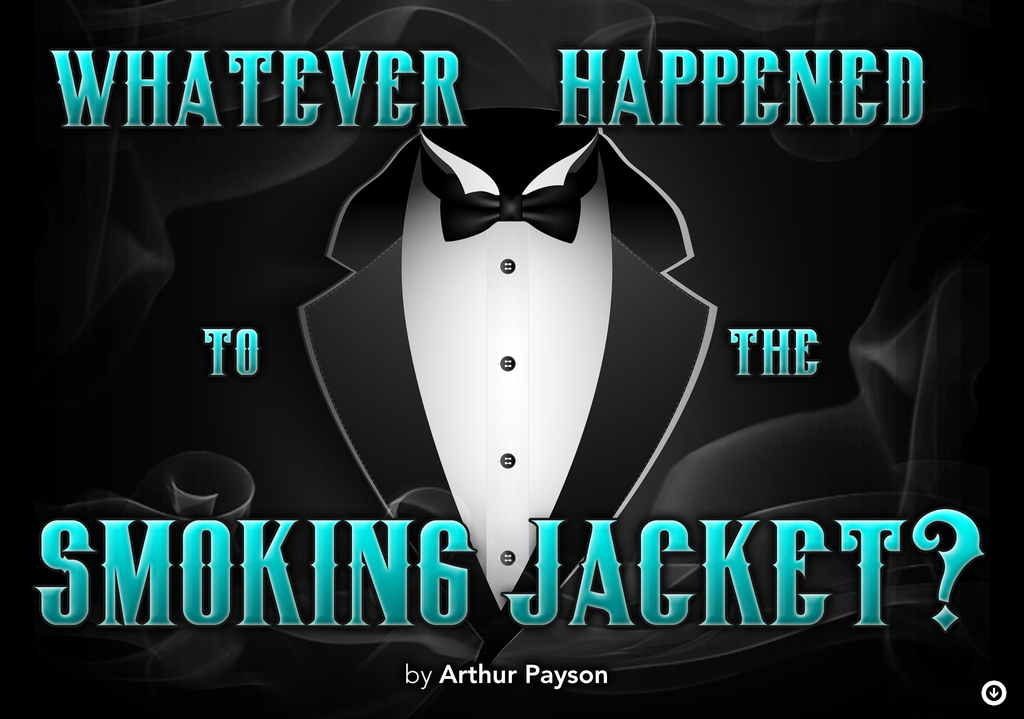 Whatever Happened to the Smoking Jacket

“Everyone in this room is wearing a uniform, don’t kid yourself.” That quote from the great guitarist/composer/performer Frank Zappa speaks volumes. With each waking day, we look in our closet to choose what we want to wear. This decision starts a chain of events that continues throughout the day. What we choose to wear tells the world a lot about ourselves. For example, the wealthy may wear Gucci shoes and a Rolex watch, while the much less fortunate may wear worn shoes and a threadbare shirt. Some may choose to be rebellious with tattoos and a Mohawk haircut, while a conformist might gravitate towards trendy clothes and popular jewelry. The generalizations could continue, but you get the idea.

Sometimes our clothes simply reflect our interests. A singer might have a microphone lapel pin, or a guitar player’s T-shirt might sport the image of a 1958 Gibson Les Paul. Those of us with passionate interests like to share them with the world. It’s what sets us apart from others. Sometimes, in an effort for individuality, we pursue interests less mainstream. That’s one of the reasons I started smoking cigars. A decision that was completely subconscious and driven by impulse. Cigar smoking was a mysterious endeavor, one I’d only seen in movies and photos of certain famous people. Cigar smoking is definitely not mainstream. Of all my friends only one is a cigar smoker. But we cigar smokers are a proud bunch. We like to surround ourselves with cigar culture. This gets manifested in many ways, one of which is our “uniform.” I show my cigar-smoking pride by wearing Guayaberas and jeans. But now that the weather has turned cold, my Guayaberas are put away in favor of flannel shirts. How can I now express my love of cigars? One option is to look back at history. A hundred years ago, one garment was designed exclusively for cigar or pipe smoking. We’ve seen it, we’ve heard of it, and maybe it is finally time to bring it back…the smoking jacket.

In the late 1800’s Turkish tobacco was being imported to England. As a result, smoking became very popular. The smoking jacket was created to wear after dinner, when the men would retire to a smoking room. This robe-like outer garment made of silk, velvet, or wool, was designed to protect the wearer from odors and falling ash. The originator of the smoking jacket may have been Edward VII, (1841-1910) the Prince of Wales. He commissioned the Savile Row tailor, Henry Poole & Co. to make a casual outer jacket to wear at his Sandringham country estate.undefined Consequently, other prominent men emulated this practice and wore similar garments when hosting dinners or other evening events. Traditionally, only the host wore this less formal attire. Eventually, the smoking jacket got so popular that men chose to have their portraits painted in these colorful robes. Over time, the smoking jacket evolved into a more formal garment call the tuxedo. This, in turn, gave way to the suit coats of the 20th Century.

The smoking jacket was both functional and fashionable. With wide satin lapels, any falling ash would simply slide off its smooth surface. Its large cuffs served to protect the hands from burning embers. Short of being made of asbestos, the smoking jacket was well designed to protect the wearer from the hazard of smoking. Its overall design is best described as a “3/4 robe.” With sash-like lapels, it is a garment one could only wear in the evening; it would look downright silly during daytime events. Yet one of the people most associated with the smoking jacket did just that. Hugh Hefner, founder of Playboy magazine, lived in a back room of his publishing office while launching his iconic magazine. He wore a smoking jacket over silk pajamas throughout the workday. Over time, the smoking jacket/pajama uniform became Hefner’s trademark, and he is still wearing it to this day. [Fans of “Curb Your Enthusiasm” may remember the episode in which Larry’s father’s smoking jacket gets switched with Hef’s. -G.K.]

Today, the smoking jacket has fallen out of fashion. Not because fewer people smoke, but rather (I think), because we live in a less formal world. Today, it’s common to see jeans being worn in fancy restaurants or to the theater. That would have been unheard of even a few decades ago. I miss wearing a jacket and tie while dining. I think we need to get back to the days when looking good meant being dressed up. It makes a special event more celebratory. And for a cigar smoker, that after dinner cigar is a celebration of a life well lived. Wouldn’t it be great to host a dinner at your home, excuse yourself for a moment, and put on a smoking jacket? You could then make a grand entrance into the den, light the fire, and pass out cigars from a desktop humidor. That would certainly kick the moment up a notch. And now that it’s winter, we need an outer layer anyway. Why not make it a smoking jacket? I love tradition, and these days, much of it has been lost. Moreover, the smoking jacket is a good way to augment our cigar smoking enjoyment, as well as protecting our clothes from ash and odor.

While researching this article, I came across a number of online vendors who sell high quality smoking jackets. So, if you are like-minded, maybe we could start a revolution to bring back this by-gone tradition. Sure, it may seem a bit tongue-in-cheek at first, but I bet we would get a lot of attention. My friend Jackson wears a smoking jacket he inherited from his Uncle. He wears it every Halloween, and gets compliments each year. (Jackson’s not a smoker. He wears it because he loves the way it looks.) For us cigar smokers its functionality makes it all the more desirable. I know there’s a smoking jacket in my future, and I’m looking forward to my guest’s reactions as I enter the room wearing one. I have a feeling others may follow suit. Cigar smokers have a connection with tradition, such is the nature of cigars, and the smoking jacket fits right in with that mindset. Let’s bring them back.

How about a few links to some nice jackets

Lance, I agree. Link me brother.

My Grandpa always had his smokers jacket on when fight night was on and he loved his CIGARS.

I own and regilarly wear a smoking jacket I picked up the the IPCP from smokyjoesclothing.com

Arthur, did you ever get that smoking jacket?

Arthur Payson is a contributor to Cigar Advisor magazine.