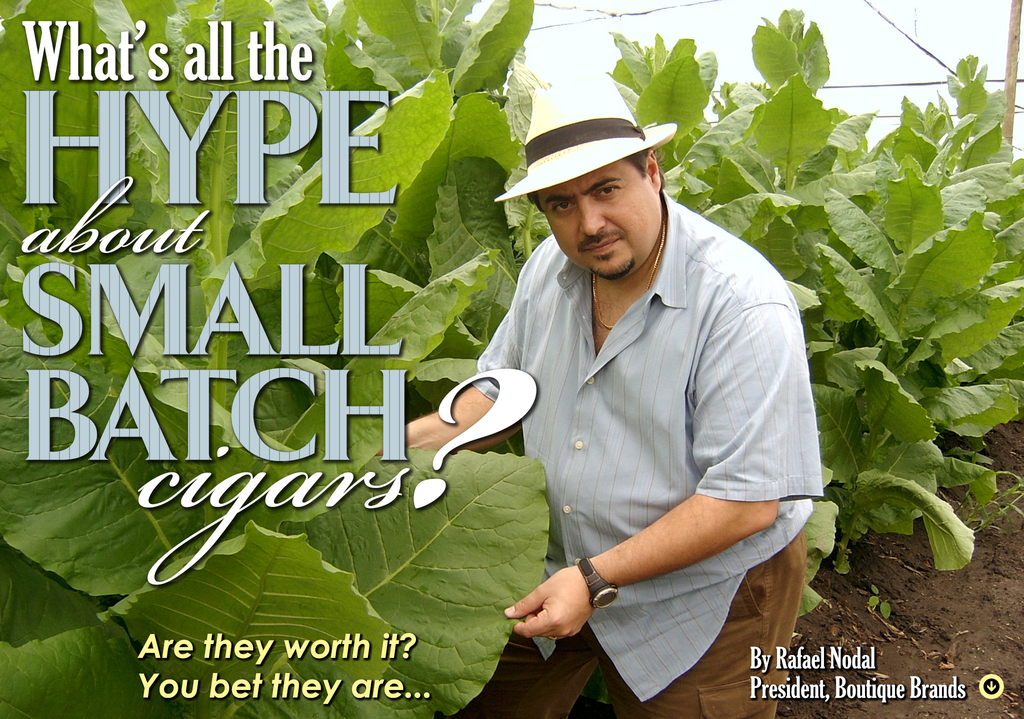 What’s all the Hype about Small Batch Cigars? Are they worth it? You bet they are

Small batch cigar production has become one of the most popular interests among cigar smokers these days. As a result, many manufacturers have jumped on the small batch bandwagon. If you were to ask, “What is all the hype about small batch, are they worth the prices?” My answer is, you bet.

Cigar production is no different than making wine, Scotch or Rum. You have commercial production of wines and scotch, and then you have the real thing, the small batch productions.

In this time of “one size fits all,” it’s good to know that there are cigars that are not mass-produced by big corporations, where the quantity is often more important than the quality. We have all seen the pictures of these factories, where you find hundreds of people rolling and making cigars. No, they are not technically machine made, but sometimes I wonder. On the other hand, mass production of cigars is a good thing. You need to produce cigars that will reach as many people as possible, like you do with any product, like hamburgers, for example.

There are hundreds of thousands of fast food restaurants, sometimes three or four in the same intersection. You can buy a burger, sandwich or salad on every corner. It’s convenient, cheap and fast. But if you want a good meal, do you tell your wife, “Honey, I want a great burger so let’s go to McDonalds tonight.” Or perhaps, you drive a little farther and pay a little more for a burger that is not already waiting for you and has to be put in the microwave before serving.

The burger example illustrates my point about small batch cigars. You get what you pay for. Sometimes you want an average cigar, with an average price, for an average smoke. But sometimes you want more, you want a great cigar, for a great smoke and you may be willing to pay a little bit more; though not too much more, since I believe that a good Small Batch cigar does not have to break the bank. Though that may be the case with many of the small batch cigars on the market today, I price my Aging Room Small Batch blends as reasonably as possible.

There is also another point to consider when you are talking about small batch production cigars. They are called “small batch” because the cigars are literally made in very limited numbers. Another way “small batch” cigars are defined is by the rarity and uniqueness of the tobaccos. Once those tobaccos run out, that batch is complete and cannot be made again. So, as it is with most things in life, all small batch cigars are not created equal.

There are also “small batch” productions named so because the cigars are made in small batches versus large commercial production. What I’m getting at here is that only a certain amount of cigars are made at a given time, but they will continue to be produced year after year, sometimes with the same tobacco, and sometimes with an adjusted blend or different tobacco. An example of this type of limited edition cigar would be the Punch Rare Corojo.

In my case, I prefer to call them small batch when, as I noted above, the cigars are made in limited quantities from the same tobaccos. For example, I get one type of especially unique tobacco in a very limited amount that has been aged for a long time, make the small batch and assign it a blend number. When that tobacco is finished, so is that batch. From there I will move on to make another small batch with a different rare tobacco and blend number.

The first blend my company released using this concept was our Aging Room Small Batch M356. That blend number was derived from the date that the blend was first created: Monday, the 356th day of the year. I bought tobacco that was aged for a long time and all grown on the same Dominican farm, but there just was not enough for a high quantity production, and that’s really how the Aging Room Small Batch concept was created.

The second blend we released was the Quattro F55. This blend was created on Friday the 55th day of 2012 and released at the International Premium Cigar and Pipe Retailers trade show (the premium cigar industry’s biggest event) in August that same year. The “Quattro” part of the name comes from the cigar’s box-pressed shape, which has four sides. I used Dominican-grown Habano for the filler and binder, and a very limited, genuine Sumatra leaf from 2003. Like in my other blends, when the tobacco is gone for this blend, so is the batch.

This new concept of small batch productions allows me and other manufacturers to use tobaccos that have been well-aged, and may even have been left over from previous productions. One advantage to this is, because there is not enough leaf for mass production, the tobaccos have been aging and curing for many years. 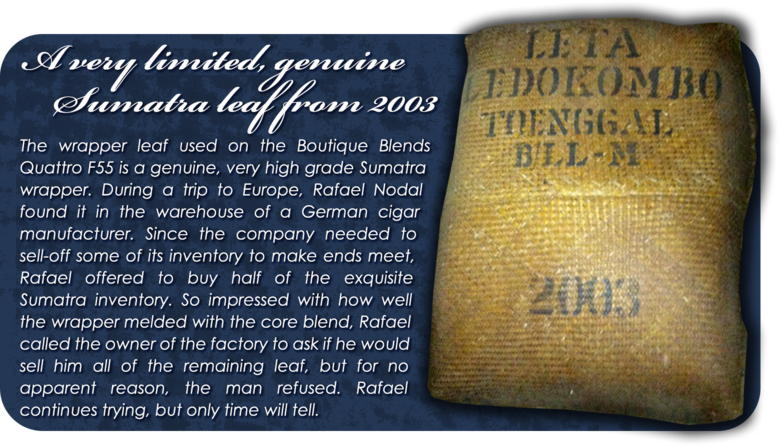 Another important aspect of small batch cigars is that we take additional steps in making sure that this limited production is made with special care and supervision; something that cannot be done by the big commercial factories, because they need to make millions of cigars.

So, the next time you’re shopping for some good cigars, instead of reaching for one of the “big name” brands, try a small batch cigar. In the end, it all comes down to quantity vs. quality.

[…] Rare Collection projects the company plans to release. The objective of the series is to offer small batch runs based on the availability of rare and superbly well-aged […]

[…] Rare Collection projects the company plans to release. The objective of the series is to offer small batch runs based on the availability of rare and superbly well-aged […]

Reading Time: 4 minutes This is more than a review – this is Dunbarton Tobacco & Trust founder, Steve Saka, speaking volumes about everything from the creation of Sobremesa Brûlée to wrapper selection, cigar pricing, retailer realities, industry miscues, Cuban cigars, and more revelations.