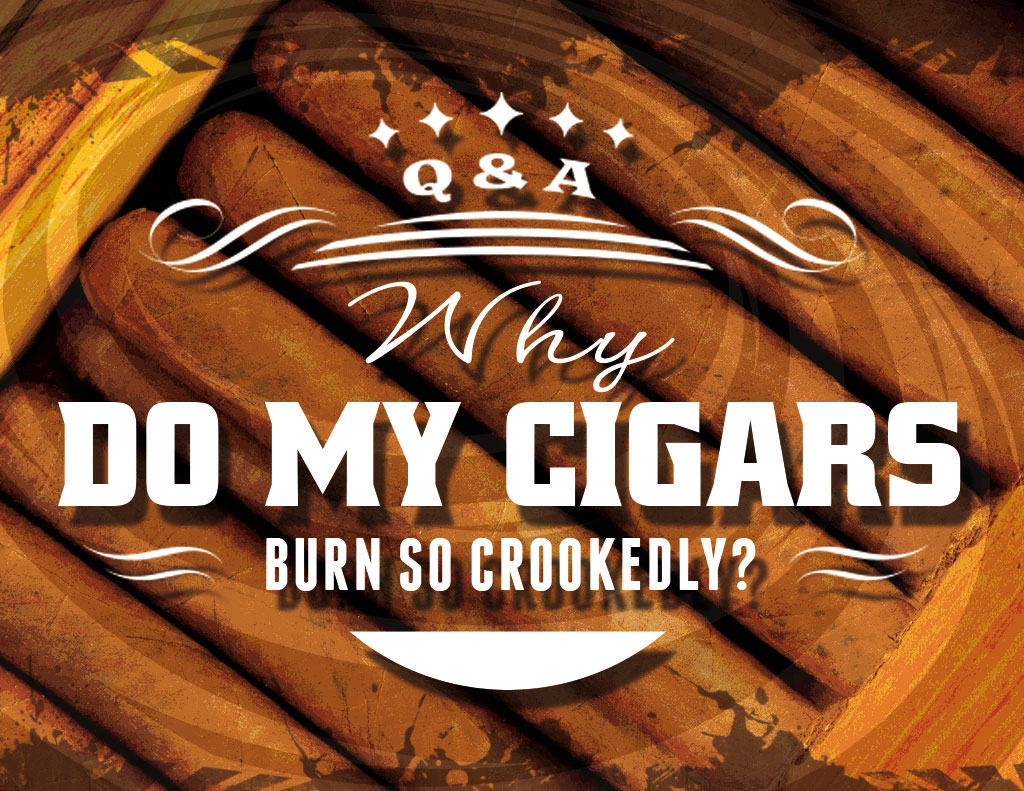 Why are my cigars burning crookedly?

Q: I have noticed that, after I light my cigar, the outer wrapper of the cigar burns unevenly and the ash may be formed on half the circumference, but the other side is still intact wrapper. Why does this occur?
— Gary Balas in Arlington Hts., IL

A: I’ve posted several Q&A’s about this. This is called “tunneling” (when only the filler and binder burn), or “canoeing” (when all the tobaccos burn only on one side.) Sounds like you’re referring to the latter, and it may have to do with several things:

Make sure your cigars are properly humidified, well-packed (few or no soft spots along the body of the cigar), that you light your cigars as evenly as possible, and finally, try rotating your cigar as you smoke it, especially outside, where wind can cause the cigar to burn poorly.

Finally, a really cool trick that works is: Once you see it start to canoe, or your cigar burns unevenly, place the cigar in the ashtray with the non-burning side (longer side) on the bottom. If you catch it early enough, the cigar will often straighten out by itself.

I found mine do that when I puff too often…..if I let it go about a minute between puffs, it burns evenly.

Great info. Just to add, I would also stress the lighting process is the key to success. Invest in a torch lighter and rotate during lighting

Many times when I light a cigar, it burns unevenly; one side is higher then the other. When I think I have the cigar evenly lit, it then starts to burn higher on one side. I don’t go through that fancy toasting routine of holding the cigar down just above the flame. I put it in my mouth and light it. However though, I do rotate the cigar. Sometimes I blow on the end to get the cigar even. And it’s even worse when I light it outside. I know, there’s the wind. When I ash the cigar, I do rotate it on the edge of the ashtray. Who doesn’t like a cigar to burn evenly from start to finish?

I have had three from the same box canoeing. RJ 1875 Churchill. Hmmm. Comment?

Hi Bill –
Three? Wow, that’s a lot. Good cigar, too. Usually boxes have only one clunker. I’ve had similar problems with multiple cigars from the same box, and it came down to my RH.
Be sure your humidity and temp are accurate. I would get the RH in to the 65% range, and whether the cigars are in the box or your humidor, try rotating them around. My question to you is, do they feel a little softer than usual, too?
G–~

Reading Time: 3 minutes We’re #nowsmoking Aganorsa Leaf in this Siboney Reserve cigar review: “smooth and creamy with sweet spice and everything nice.” Is this Lonsdale your next smoke? Click to get the details delivered in under 2 minutes…