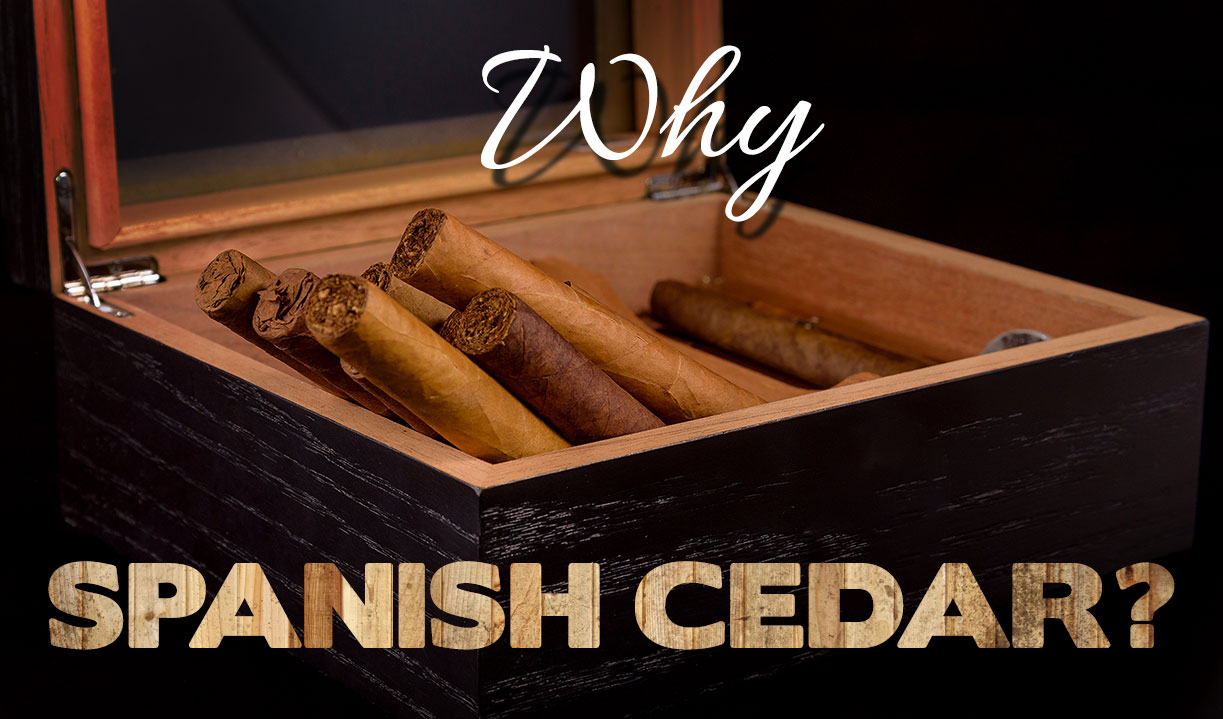 Why is Spanish Cedar Used in Humidors?

You’ve likely seen Spanish cedar listed in the description of a humidor – but have you ever wondered why humidor makers use this particular wood?

Maybe you’ve seen a bargain bin humidor that’s made of cheaper materials. You might have even had the idea to go out and make your own humidor out of budget-friendly materials. We get it. Sometimes it’s better to be cheap. But when it comes to your cigars, however, try to see them as an investment. No one wants to spend a bunch of bills on a box of great cigars, only to revisit them weeks later and find an expensive pile of kindling. In this article, we’ll detail why Spanish cedar is ideal, and even a few ways to cheat the system if your humidor isn’t lined with it.

So, let’s set the scene. You reach in for a flavorful and relaxing cigar and the pleasant aroma of tobacco married with cedar fills your nose. In doing so, you might quickly glance at your hygrometer to check that your cigars are at the right temperature and humidity. If you’ve kept up with seasoning, cigar rotation, and have ensured proper humidification, everything should be on the level. And the reason it is largely hinges upon the wood inside your humidor – Spanish cedar. If yours is lined with anything else, that might be why you’ve experienced problems. The good news is that every wooden humidor offered at Famous Smoke Shop features a Spanish cedar lining – and for good reason. But why is that specific wood so ideal?

Why should my humidor be lined with Spanish cedar?

From an outside perspective, you’d be forgiven for thinking that just about any wood would suffice. They all absorb moisture, yes…but humidification is more complicated than that. Take oak for example. It’s a hardwood, and as such, it’s dense. This density means it’s not nearly porous enough to maintain a proper equilibrium for your cigar stash. You might get away with it, but instead of seasoning twice a year, you’d be doing it almost monthly. That’s a stiff price to pay for a shortcut. Spanish cedar is softer, and as a result, not only does it store moisture, but it releases it when conditions get a bit too dry. Add to the argument that it’s pleasantly aromatic, and you’ll start to understand why it’s almost universally used. It’s these properties that compel companies to line entire rooms with it for long-term aging of cigars before they even reach the store shelves.

In what other ways is Spanish cedar used for cigars?

Speaking of uses of Spanish cedar outside a traditional humidor, you’ve likely noticed a cigar or two that has a wooden sleeve or tube as part of its presentation. They usually go up about halfway to three quarters of the way up, covering most of the cigar’s surface area. Not only does this enhance the look of the cigar, but it functions as a vessel to store humidity. Left out of a humidor, cigars with these sleeves will retain their moisture a bit longer; a huge benefit to anyone who’s taking some sticks along with them for longer trips. For these reasons, companies like Arturo Fuente have been taking advantage of Spanish cedar wraps for many years. As a bonus, if you ensure the tape has been removed first, they even make for convenient cedar spills that will add an aromatic effect to the lighting of your cigar. As they say, this wood is good. In a word…multifunctional.

Another benefit to Spanish cedar, in both humidors and cigars with sleeves, it amplifies the notes of cedar, sweetness, and even woodiness that you might encounter in a blend, a trio that’s often sought after by many. If you removed a cigar from its wooden sleeve and waited a few days to smoke it, it would likely taste noticeably different from its cedar-clad siblings. Whether that’s better or worse for your palate is up to you, but it’s food for thought and definitely worth the experimentation.

What if my humidor doesn’t have a Spanish cedar lining?

There are tons of options out there without it, even some that we recommend situationally. I exclusively use humidor jars to store my cigars as they require far less upkeep and frustration to maintain, but they’re made of plastic and don’t offer any aromatic benefits on their own. An easy solution is to toss in a few of the cedar dividers that you find in some cigar boxes. For the same reason manufacturers slip on those sleeves, others will insert these dividers between rows. They’re pretty easy to come by, and most retailers will thank you for taking them off their hands because that’s less trash for them. Once in your jar, or travel humidor, they’ll impart the same aromatic and humidification benefits as a lining would, albeit not as much, but it’s better than nothing.

Did you find this article helpful? If so, drop us a comment below.

Reading Time: 3 minutes This week in Top New Cigars, we review CAO BX3, El Rey del Mundo, and All Saints. See which ones you should be smoking before summer ends!

Cigar Smoking as a Spiritual Experience