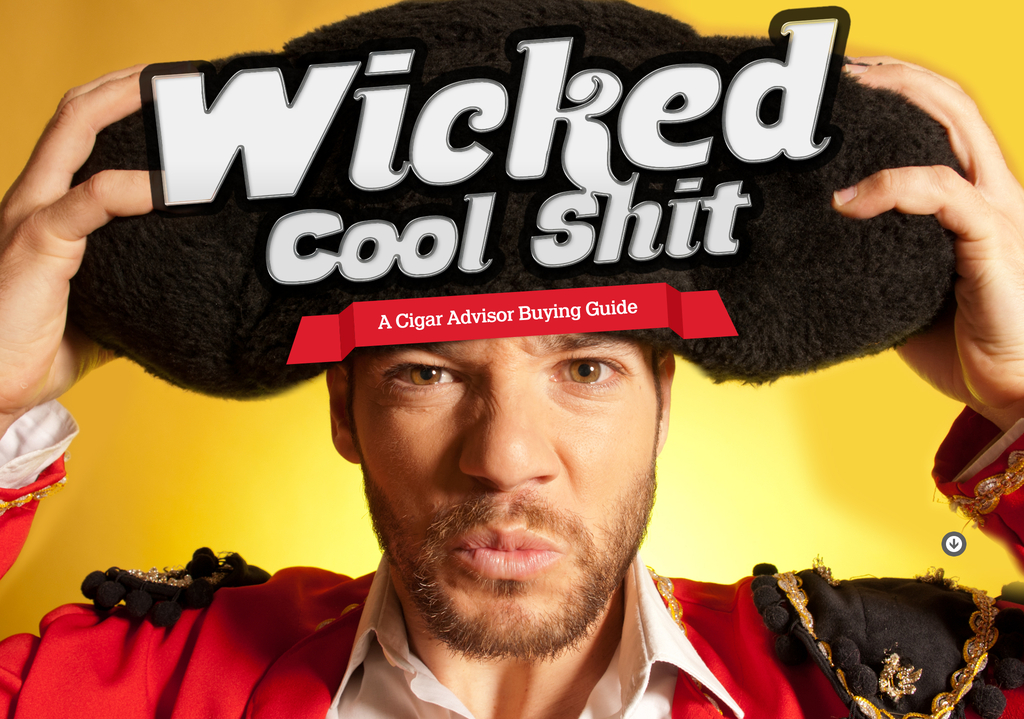 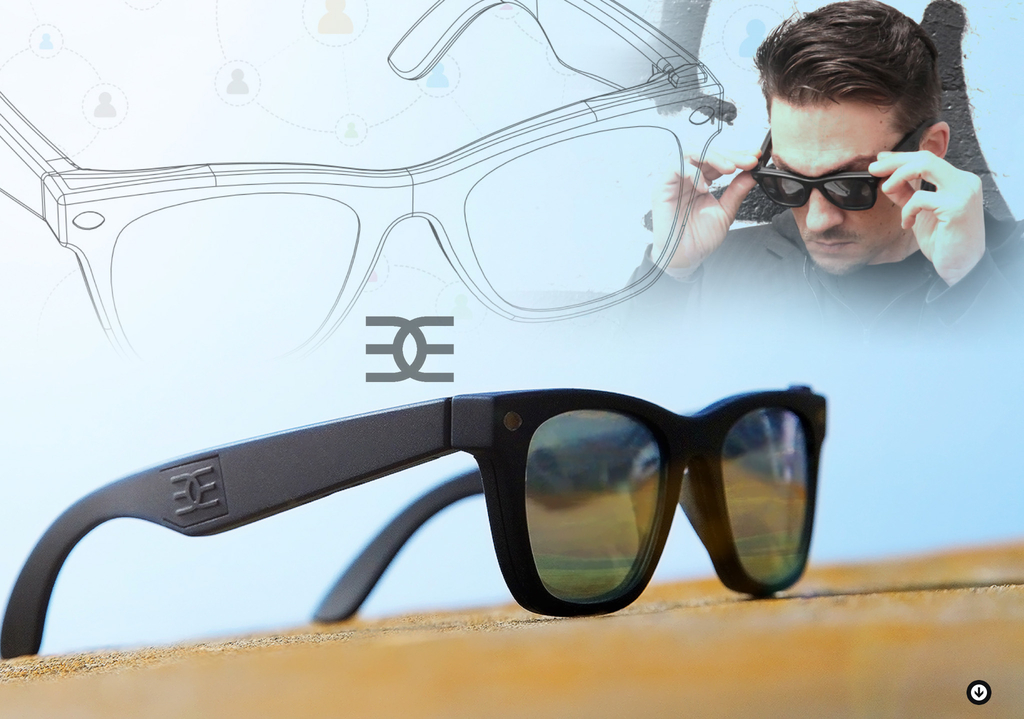 It’s long been said that glasses make you look smart – but this is ridiculous. Considering they put a man on the moon with less potent computing power, think about what these specs will do for you…inside the frames is a powerful mobile computer and HD digital video camera, operated with a one-button video recording control (storage is available in as much as 32GB, features a long-lasting battery and connectivity through micro-USB.)

So what does one do with such powerful technology? Post videos on Facebook, naturally. The lenses also have a control to adjust the tint, making them lighter or darker depending on your location/if you wear your sunglasses at night…so you can, so you can…- well, you take it from there. And for those times when you’ve said, “you should have seen…”, now they can – the glasses can stream HD video and audio through the YouGen.TV app, and directly onto your Facebook wall, from your POV. Which could get weird fast, if that sentence ends, “you should have seen the chick I brought home from the bar last night.” 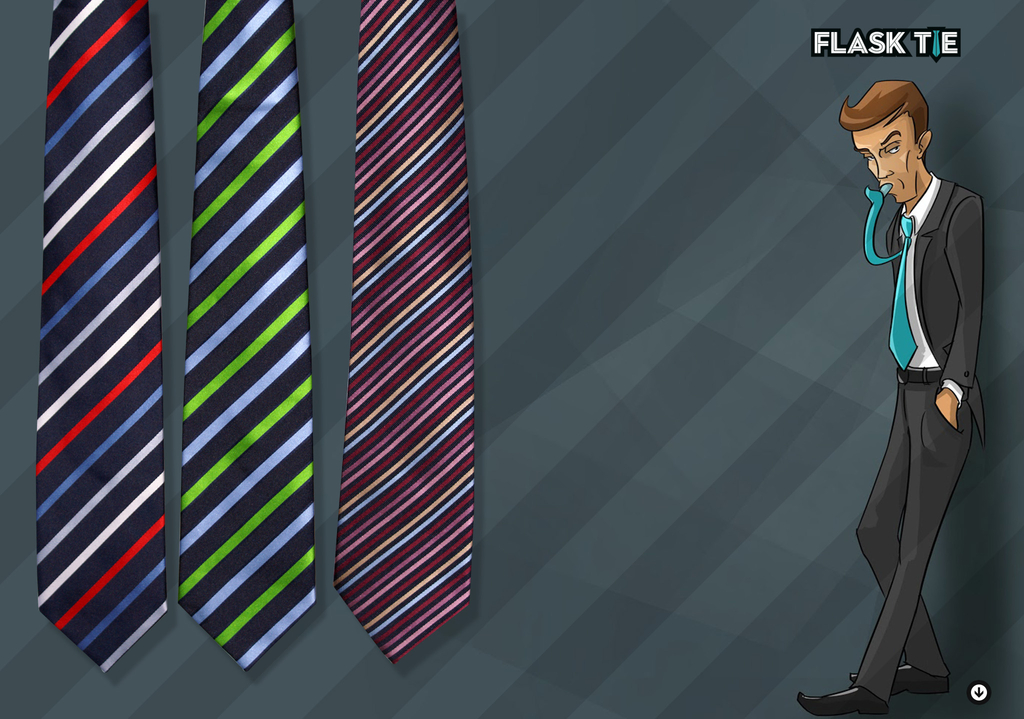 Truth be told, you should own one tie – even if it’s only seen on you when you’re dragged to weddings and funerals. So whether you’re starting the reception early or need a little liquid courage casket-side, take the opportunity to make these occasions truly special by slapping on a FlaskTie. Designed with a hidden bladder in the fat end of the tie, the sweet nectars are accessible by a self-sealing straw – which is especially handy, as you wouldn’t be able to pass off the oaky-shaded drips of Johnny Red on your shirt as “tears of joy.” Speaking of color, any of the 5 available patterns will accessorize well with that single suit you own (also seen only at said weddings and funerals); but in addition to being a solid fashion statement, the FlaskTie is “the world’s most covert flask.” So if it’s a graveside gin that will help you soak up the moment of Me-Maw’s passing, send her off with about 6 fluid ounces of any stiff drink. 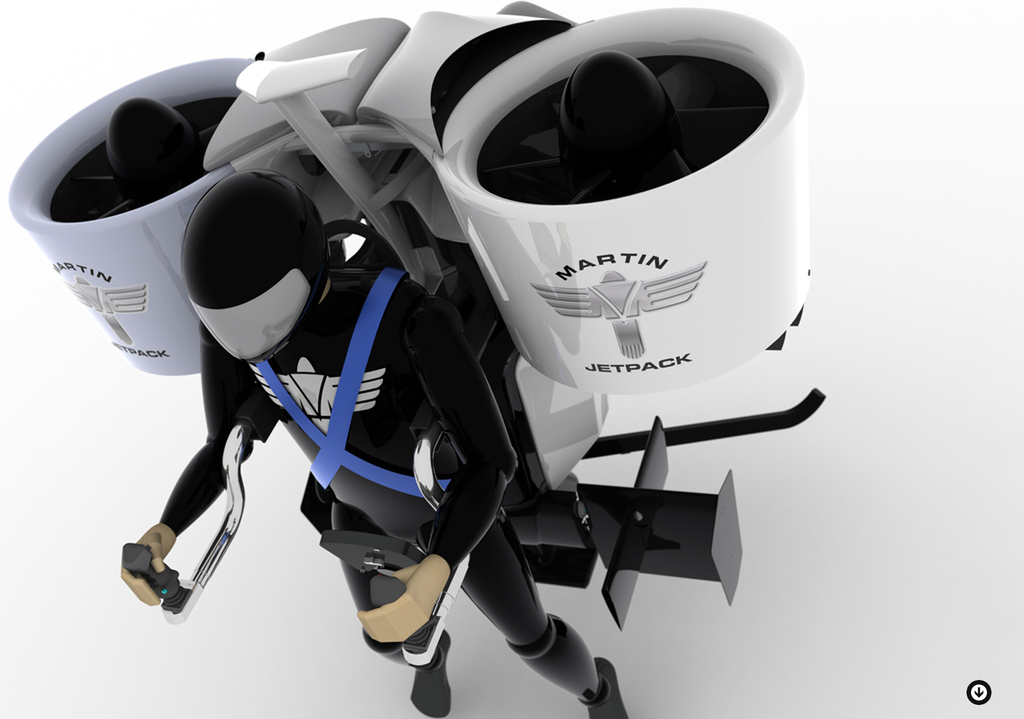 “Since the beginning of time man has dreamed of flying as free as a bird. Today, that dream is a reality…” If the birds you see are routinely flying with a couple hundred pounds of turbofans and a gas engine strapped to their back, then sure. Martin is readying the world’s first “practical” jet pack, because, well, science has been promising us a jet pack for over 60 years – and goddammit, we intend to collect. Easy to deploy and flyable in reasonable weather conditions, power starts with a gas engine driving twin ducted fans which produce enough thrust to lift the aircraft and a pilot in vertical takeoff and landing, and sustained flight. It even has an automated hover function. Of course, there’s the always-present jetpack “what if?”: “What if the engine shits the bed while I’m 400 feet in the air?” Lucky for you, they included a ballistic parachute and crumple-zoned undercarriage, which means the splatter will be significantly more controlled when you return to Earth the hard way. 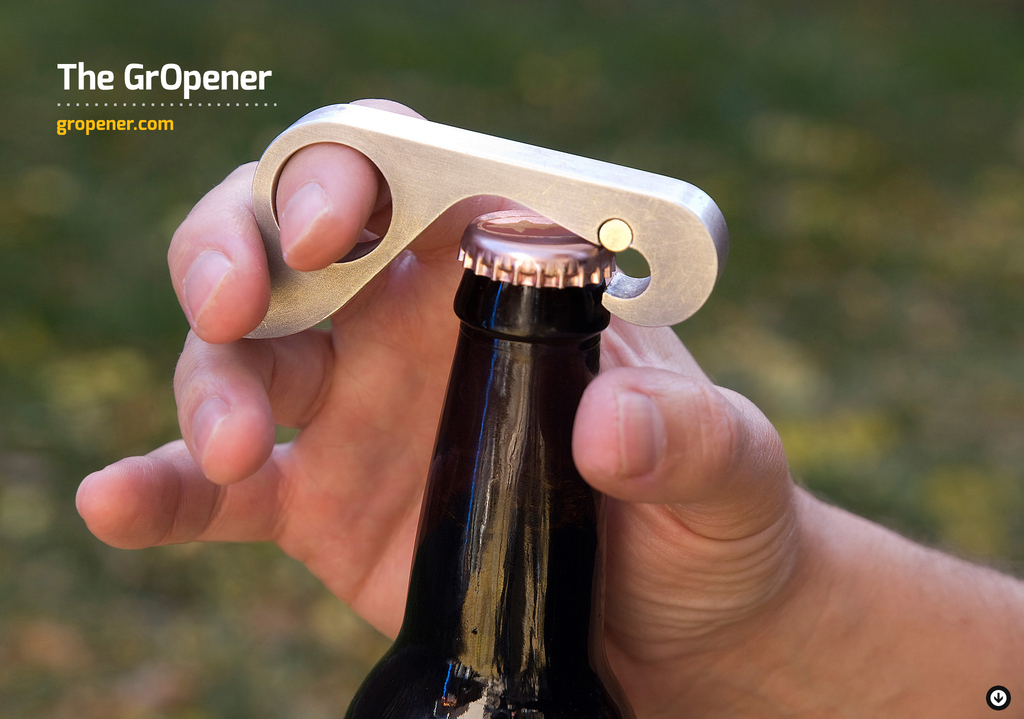 Rather than get into an extended Archimedian discussion about fulcrums and pivot points, let’s just say that this bottle opener is the balls. We’ll admit – the name kind of threw us, as something that sounds like the act of fondling is not often associated with opening a cold one. Which is maybe where the name came from. But any creepiness aside, the GrOpener is our runner-up for “most fun you can have with your hands.” Do it once, and you’ll want to walk into strangers’ houses and open all their beers, too. Your GrOpening hand will be getting more action than when you were 17 and in the backseat of your dad’s car on date night. The creation of Mark Manger of Denver, Colorado, and made in the USA, it was inspired by the stick & screw openers he worked with while slinging bottles in Africa in the mid-90’s. The GrOpener uses the same leverage principle, but is unique in that this tool uses motion and force from the act of grabbing the bottle to also remove the cap. Also unique: the GrOpener is designed in a way that accommodates amputees, stroke victims and others who may only have full use of one hand. To that, we say “cheers.” 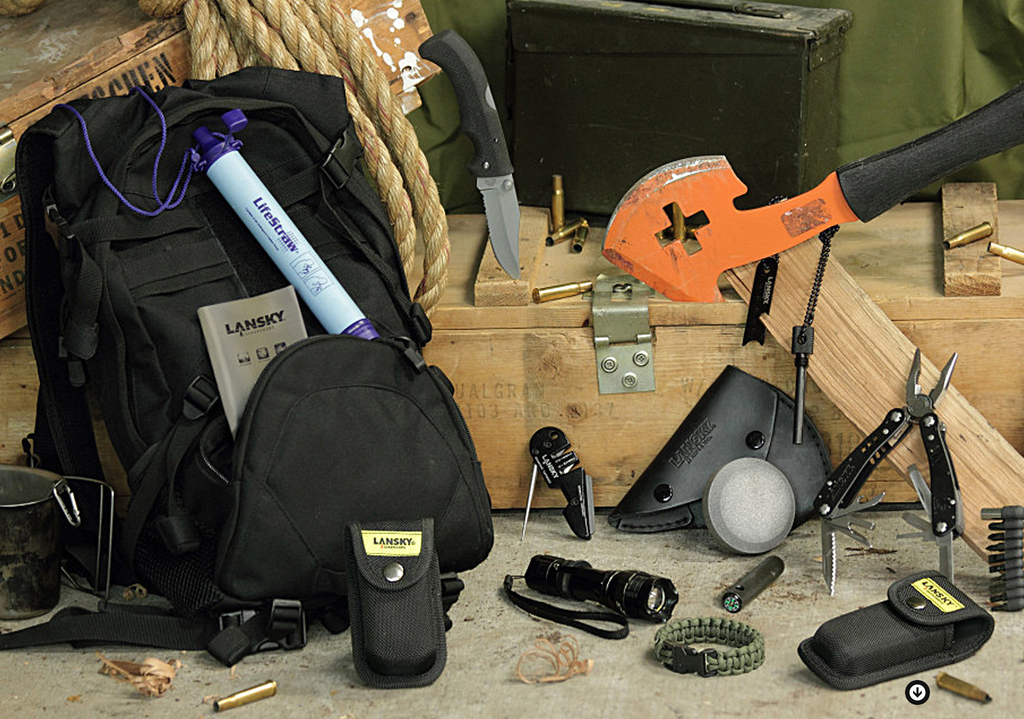 Because we’re all just on standby for an impending apocalypse, zombie or otherwise, you must be properly prepared. The T.A.S.K. (Tactical Apocalypse Survival Kit) has been designed by the experts at Lansky, and should fulfill the role of basics in your bug-out bag. So name the survival situation – you should be ready with more than a “duck and cover” strategy, right? So if your situation calls for, let’s say, a battle axe – no problem! There’s one in there, along with a multi-tool, easy-grip knife and multiple sharpeners to keep your steel sharp for the End of Days (or visit from your in-laws). The T.A.S.K. also features LifeStraw Water Purification, allowing you to quench your doomsday-inspired thirst by drinking directly from a lake or river; firesteel, compass, paracord bracelet and a tactical LED flashlight – as you want to be sure you see them before they see you. 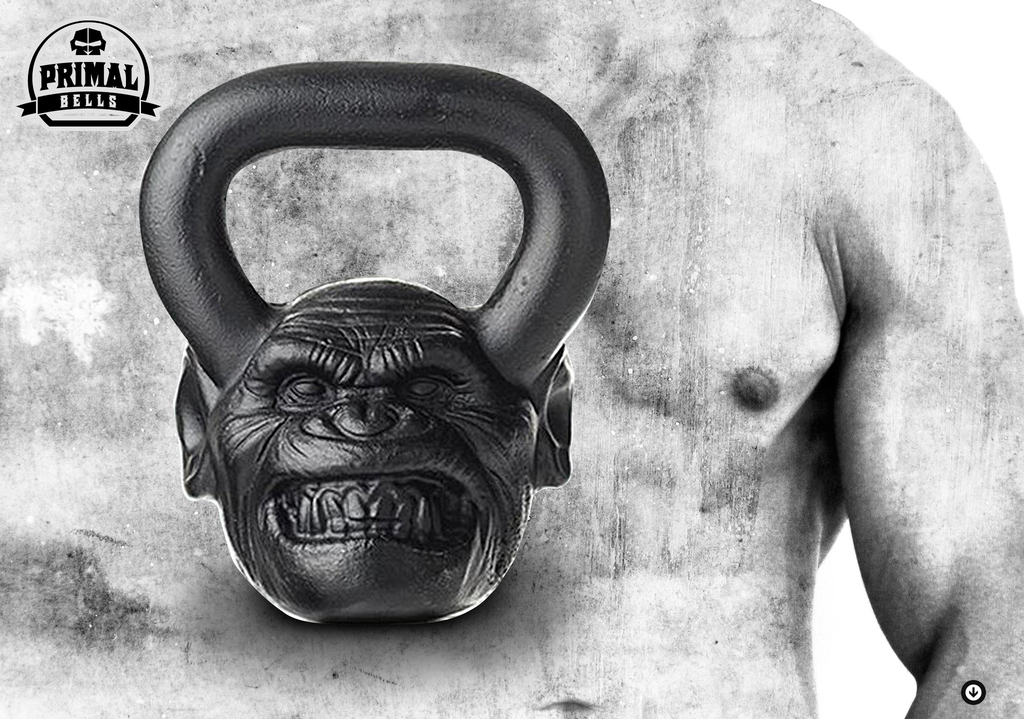 Your gym buds say you lift like a beast? Or maybe you like to work out in dungeons…that’s cool. There’s now some gear for that: the Onnit Primal Bell Chimp. Weighing in at 1 pood (36 lb), it’s a directional kettlebell that will allow you to take your workout to, literally, full-on beast mode. Primal Bells are made from high-grade, rust and chip-resistant coated iron; the images you see were 3D scanned from an extremely pissed-off primate, and then sculpted into the iron for “perfect balance for a professional quality workout.” An enlarged handle lets you improve your paw’s grip strength over a run-of-the-mill bell, and the bottom is flattened so that 36 lb savage sits solid on the floor. Of your dungeon. 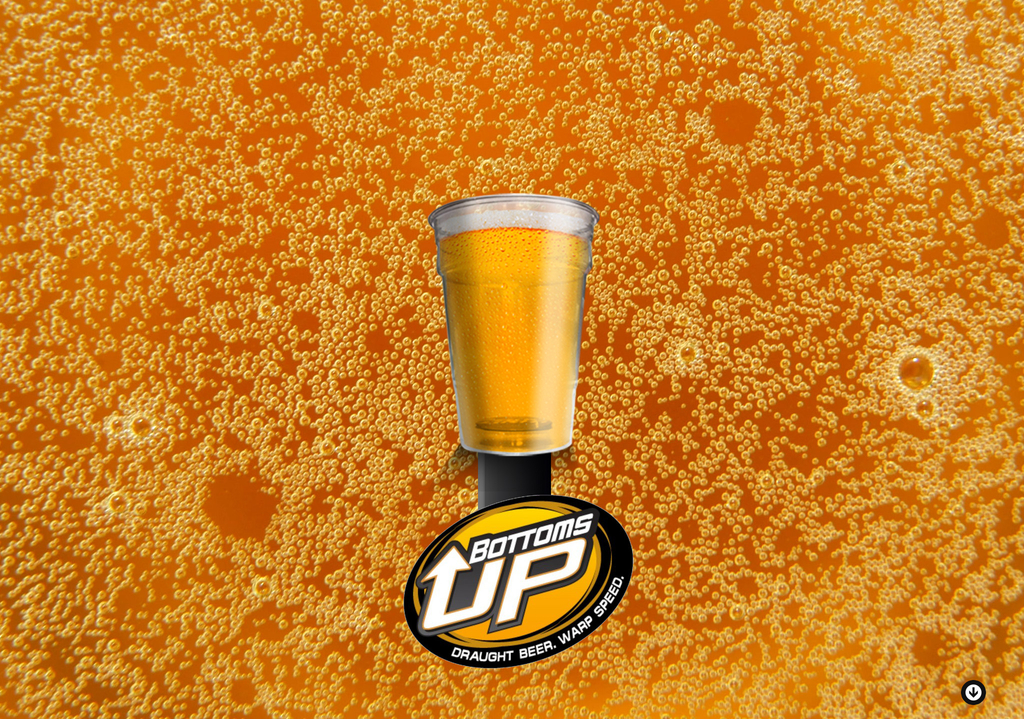 We’ve never been much on magic tricks…maybe because of that odd clown experience at a particular childhood birthday party in ’81. But upon viewing the Bottoms Up in action, we believe again. The system is meant to replace the faucet on your existing draft beer system – which means no more wandering out to the garage, standing in front of the 30-year old fridge with the tap handle sticking out of the front, pouring a beer and spilling half of it on your lawn mower. All you need to do is run your lines to the base unit, and set the specially-designed Bottoms Up draft cup down, and…magic words optional…it fills up. Place the base unit anywhere – these guys built one into a couch – and you’re off to the races. How it works: the cup has a hole in the bottom, sealed with an FDA-approved rubber magnet and metallic ring. When the cup is seated on the dispenser, the nozzle pushes up on the magnet to break the seal and the cup is filled. Pick up the cup and the magnet reseals the cup for leak-free imbibery. Abracadabra! 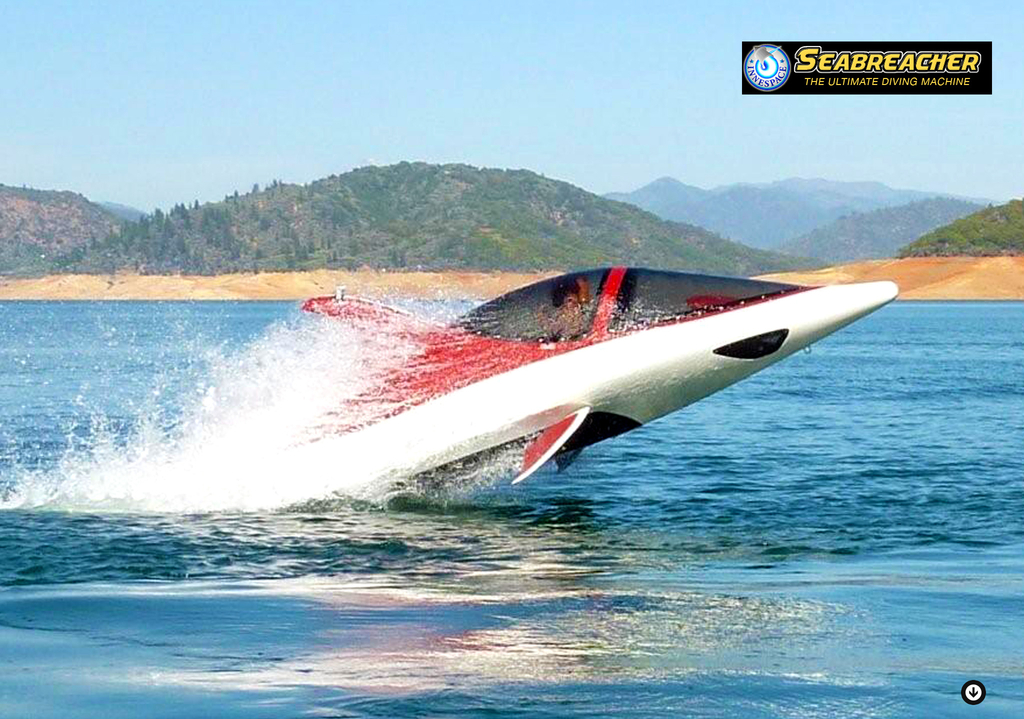 The Seabreacher J is half-watercraft/half-submarine, submersible to 6′ and travels at up to 20 mph under the surface. More than just a jet ski on experimental PEDs, power comes by way of a Rotax engine, available in 155hp or 215hp supercharged options – and can be registered as a conventional powerboat in most countries. Underneath the ½ inch acrylic canopy, you strap into a 5 point racing harness, survey the layout from the snorkel mounted video camera and dash mounted display, fire up the on-board spare air & communication systems, and your transformation into “killer from the deep” is complete. Step up to the larger models (Seabreachers X & Y) and you can honestly tell your friends, “you’re going to need a bigger boat.” 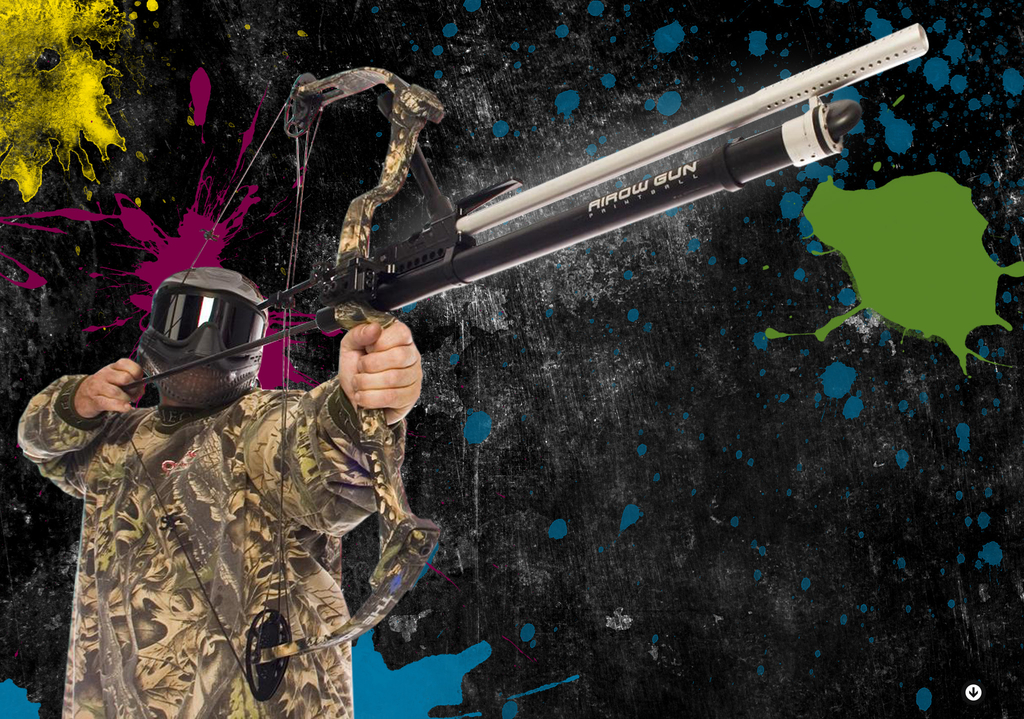 It’s the sound you dread on the field of paintball battle – pssst – your CO2 is empty. You have a dozen guys bearing down on you with itchy trigger fingers, ready to light up their guns and paint your junk the moment you even twitch. You don’t have to take it lying down anymore. Unleash hell the Middle Ages way, with the Bow-Mount Paintball Airow Gun. Using the draw of your compound or recurve bow, you can sling .68-caliber ‘balls up to 280 feet per second accurately and, unlike your gun-toting friends, you don’t need to worry about running out of CO2 or compressed air. Or better yet – as the Airow Gun is super-quiet, go all Assassin’s Creed and be your team’s secret weapon on the course. 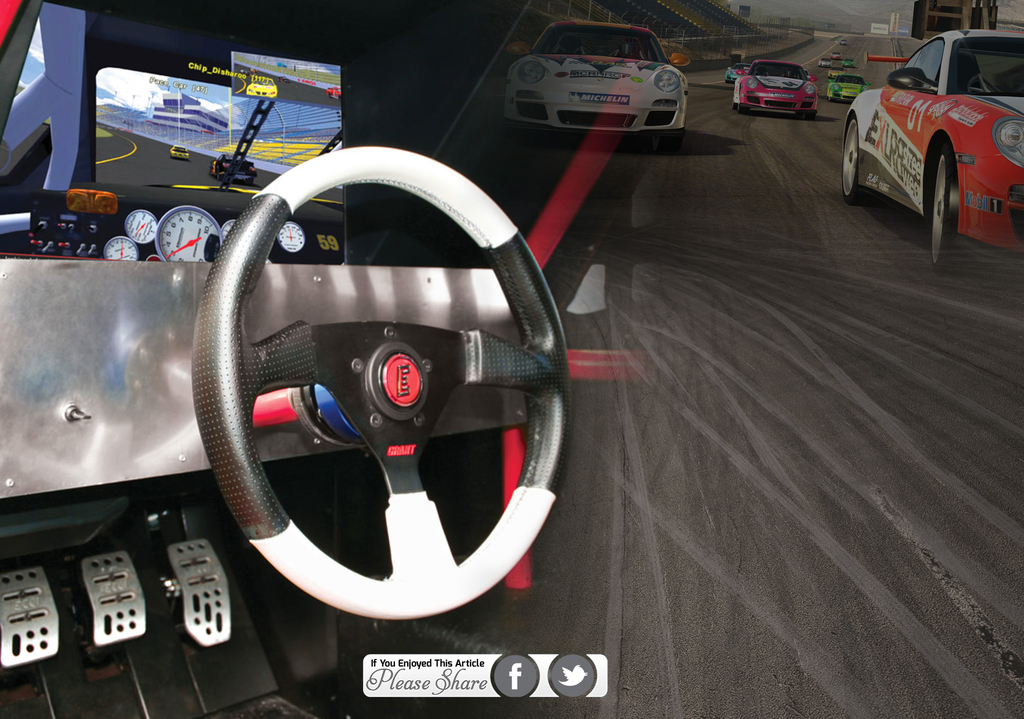 While it’s not quite the same as buckling into a full-on 800+hp NASCAR, it’s about as close as you’re going to get out of a simulator. Electric actuators built into the bottom of the car cause the simulator to roll and pitch, giving you the real-feel of actual racing conditions (without the G-forces thankfully) like entering a turn or moving up the speedway banking. Pit stops? It even raises and lowers during tire changes, thanks to the same kind of platform used in museum simulators. The only break from a real race car’s spartan interior (there is no speedometer in a stock car, fyi) are the two paddle shifters, instead of a standard 4-speed gearbox. No worries, though, as the experience of 5-Time blowing by you at 190 is transmitted in 5.1 surround sound. A 22″ wide-screen LCD monitor gives you a heads up in the cockpit so you can slam, bump, nudge and rub your way around 21 different tracks. Because rubbin’, son, is racin’.