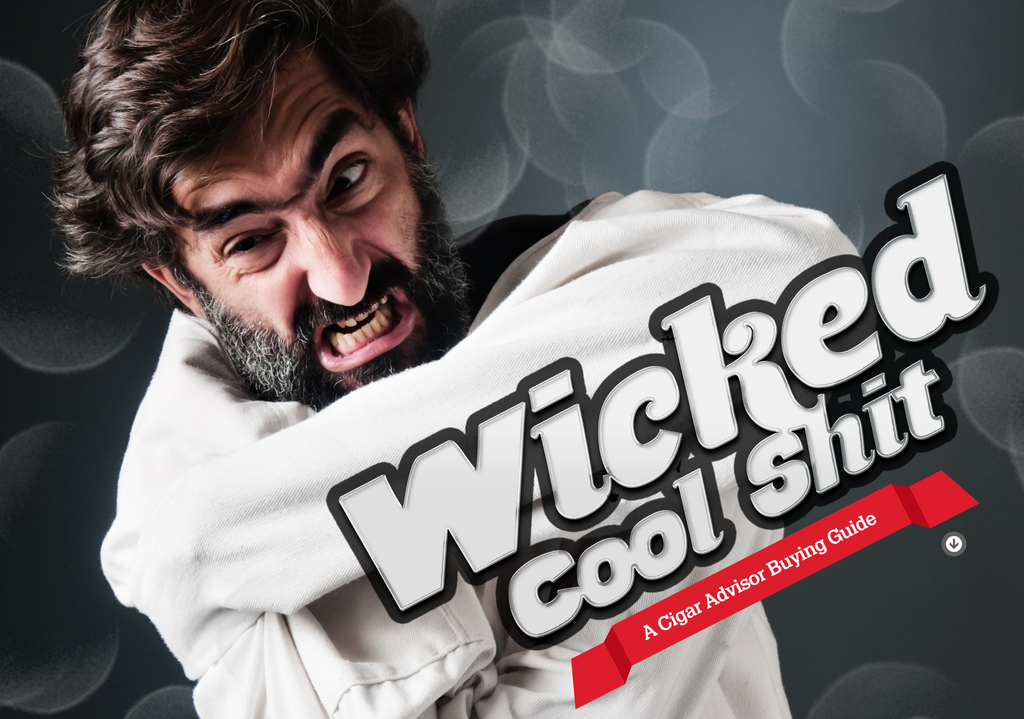 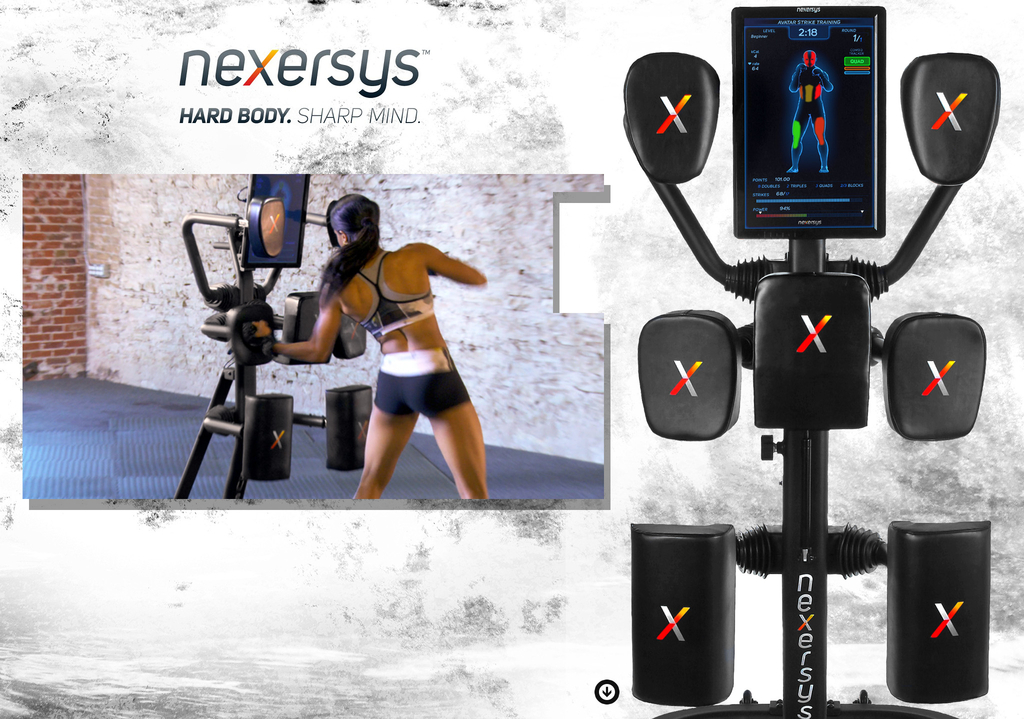 “Fitness Made Fun for the whole family” – if you were raised in a family of fucking gladiators, maybe. What the Nexersys really is, is a training system that allows you to spar with the intensity of full-on MMA beast mode, combined with technology that genetically-engineered nerds at an evil consortium of Ivy League schools must have cranked out of their IT lab. Remember how Ivan Drago had all those high-tech Iron Curtain punching bags and stuff when he trained in Rocky IV? Bring that hot mess into the 21st century: taking on Nexersys is, well, it’s like boxing Iron Man. Progressive workouts call to all skill levels, offering strike pads with integrated accelerometers to bring (and measure) your greatest hits, interactive training rounds…professional videos…the list goes on and on. There is interactive, then there is intelligent – which is what Nexersys brings to your home gym. You can even store five unique onboard user profiles, or choose multi-player gaming to compete with friends and family. Whether you choose to feed the loser to the lions is up to you, of course. 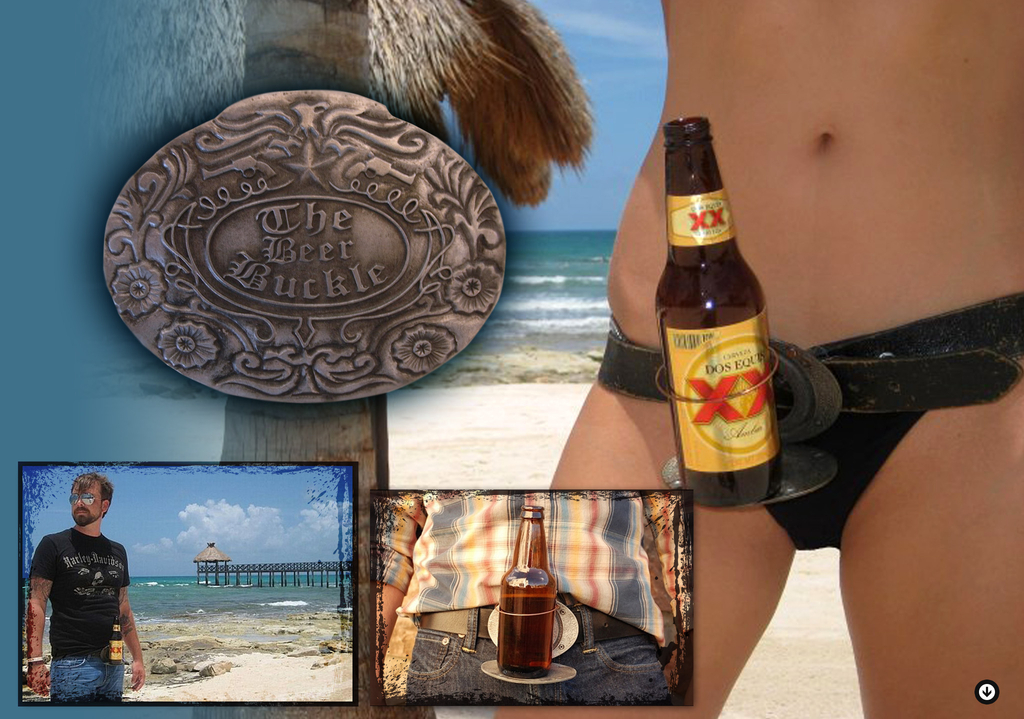 We’ve advised in the past that every man should own a sport coat and at least one tie. Never thought we’d do it – but today, we add owning a belt buckle to that list. No, not the Texas State Rodeo dinner plate or the one that says “Mustache Rides – 5¢” – see, you gotta make a big statement with that hitch. We admit it – never have we been so excited about fashion as we were the day we laid eyes on the BeerBuckle. It is a belt buckle. It is a beverage holder. But together, its whole is way more than the sum of its parts. “Not just a caddy novelty item,” says inventor Jay Kriner on the Beer Clothing Company website, he argues for the BeerBuckle as a functional fashion accessory: spring-loaded and retractable, it holds your drink. What else you do is not important; what matters is that your beer is in the clear, while you get down to two hands full of trouble. 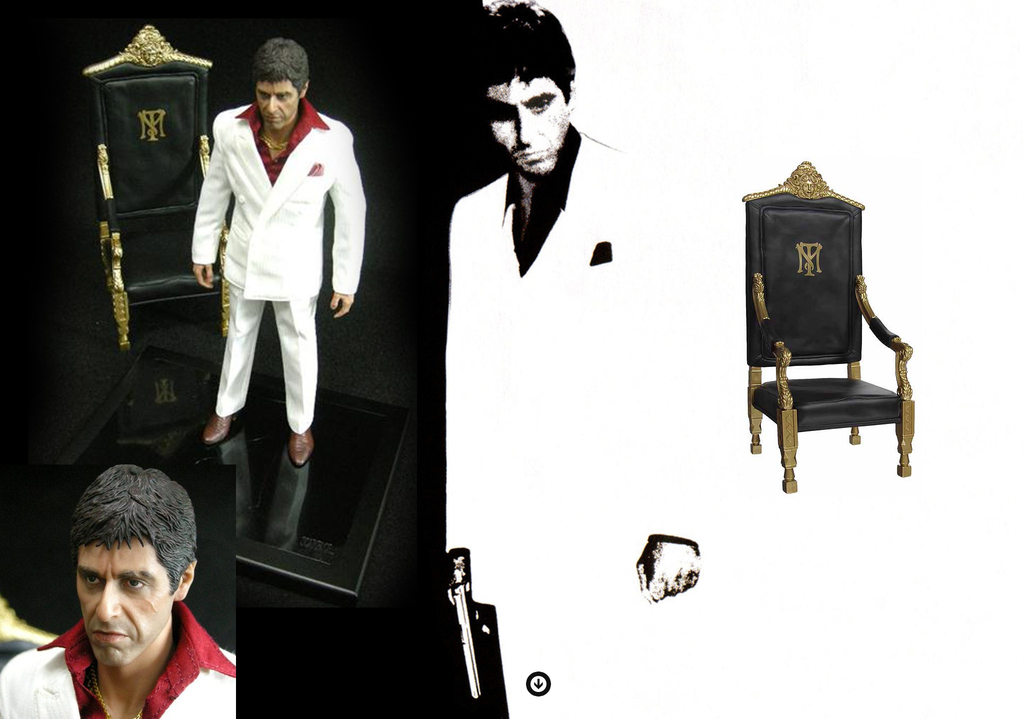 Say hello to our little friend! Get that Cuban bad-ass in miniature form, for a price much less substantial than it would take to get Pacino to come to your house and yell/shoot at you for real. This 12″ Tony is made of PVC & ABS plastic, and features 36 points of articulation – allowing him to hit a couple rails of blow with extra flexibility. Clad in his signature?white 2-button suit, the mini-Montana also comes with extra hands…a gun, to reenact just about every scene in the movie…real leather shoulder gun holster…TWO gold necklaces to prove he is extra full of swag, and many more accessories. ?No stranger to cigars, he even brings his own smoke (to scale, of course). He stands tall and proud on a metal & wood base, thanks to a magnet in his shoes. Just remember to keep him away from the rest of your action figure collection – we won’t be responsible if tiny Tony visits your 12″ Star Wars Millennium Falcon diorama and fucks Han Solo’s shit up. 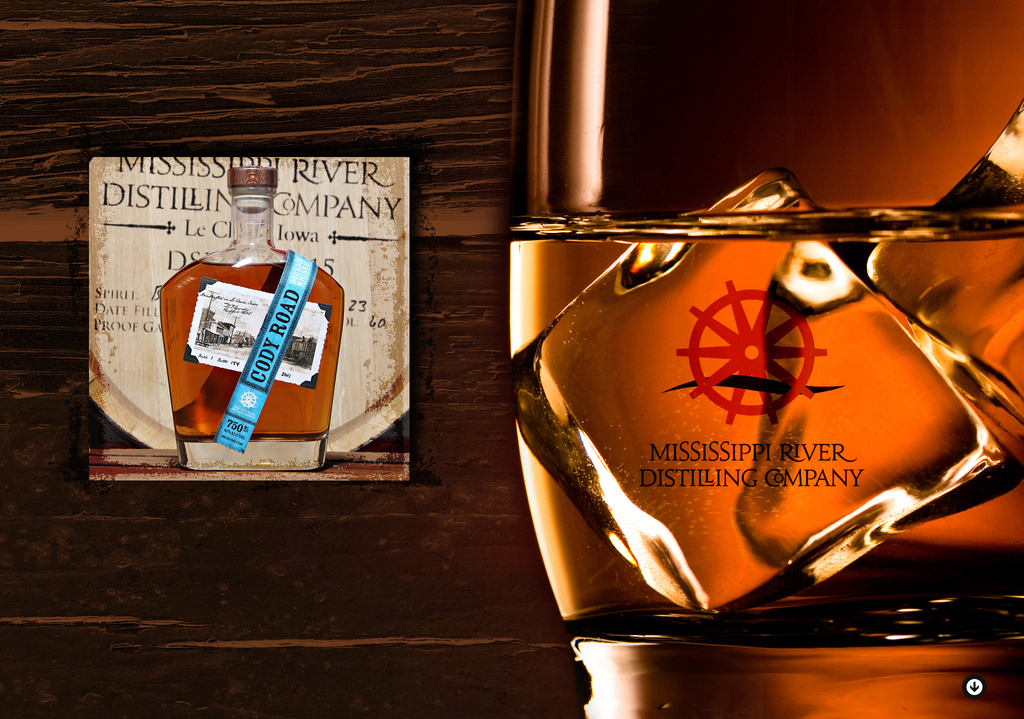 If there’s one thing we know, it’s that you either have to be dead, or drop a ton of dough to get your name on something. Since the first is not a suitable option, let’s use that coin wisely and make an “investment” – your own whiskey. And we’re talking a process waaay more involved than just scraping the label off a bottle of Jameson and gluing on your own. Great for a “house brand” if you have your own restaurant, or maybe your cigar club – as long as you and your pals can agree on a recipe, Mississippi River Distilling will custom-make a 30 gallon barrel of it for you. Pick the grains and yeast, then single out a barrel for the job – pick the age and the proof you want. Then select a proper name for your concoction. We stress proper – if you blow this opportunity and create a name that sounds stupid, you’ll regret it – because you end up with 160 bottles of 80 proof whiskey when you’re done. They even let you keep the barrel; which, at 6000 bones, we’d want to be buried in after the drink is drunk. 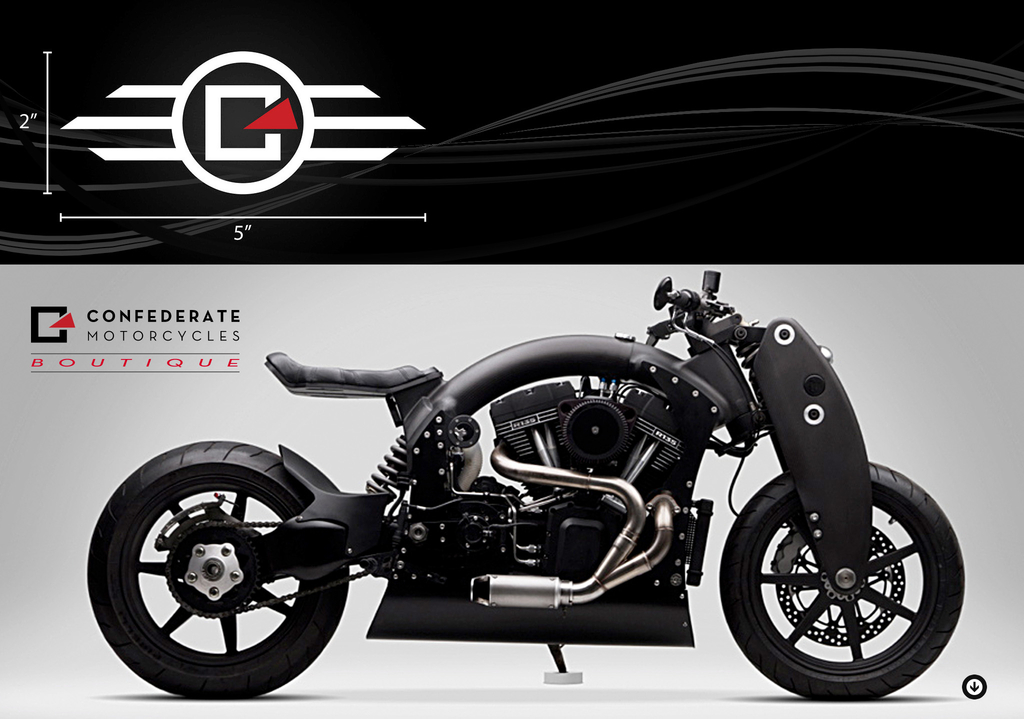 We’re going to start by saying that there’s not a lot of info out there about this bike…but given that it comes from the design house at Birmingham, Alabama’s Confederate Motorcycles, it’s considered more a work of art – so we let the design speaks for itself. Showcasing a style that would make even Mad Max piss his pants, the Wraith is all balls: big-bore V-Twin, minimalist pipes, tube frame tank and only available by special order. Be assured that you will not see this handcrafted ride hanging outside a bike night at your local Hooter’s: production of the R135 is limited to 7 (no, we didn’t leave off any numbers…7), and each will run ballpark $135K. But that’s what these guys at Confederate do – the uncommon, through simplicity. 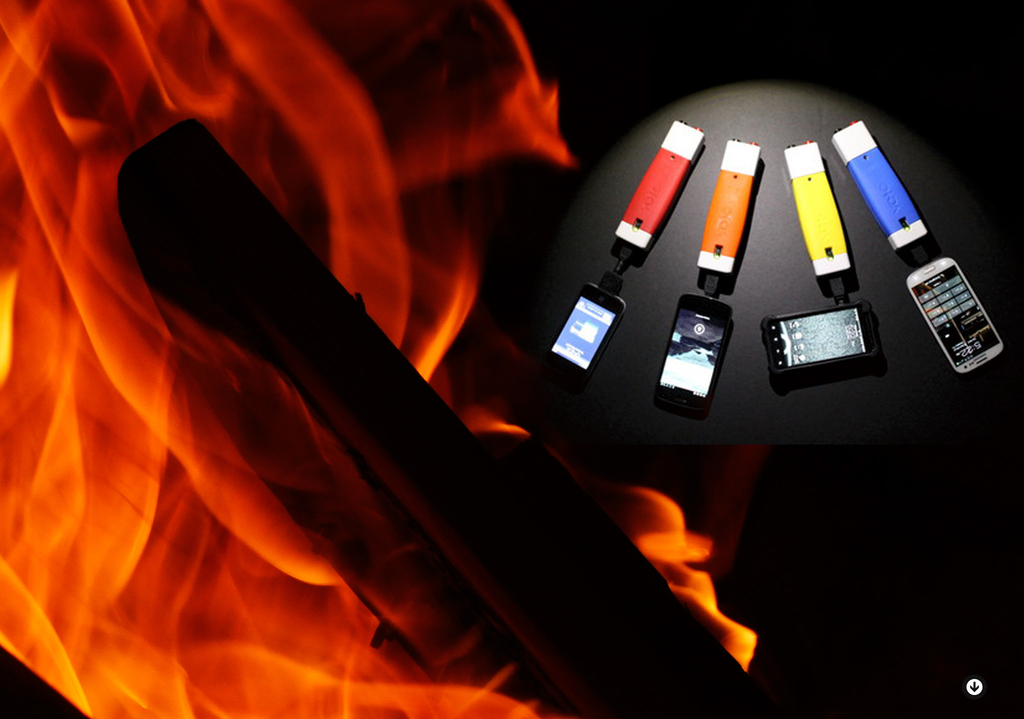 Warning: there is science here. For millennia, man has found new and creative uses for fire. Cooking our food, heating our homes. Attracting search & rescue parties. Keeping away lions. Flamethrowers. All useful shit. Now, fire charges up your cell phone battery. “What sorcery is this,” you say? We counter with Voto, the biomass-fueled cellphone charger and LED light. Voto “integrates” (which is a fancy way of saying “stick the business end under the charcoal and light that bitch up”) into your camp stove fire, so as you go about your cooking business – the inferno charges the unit. How? No idea. Don’t care, either. All we know is energy from the fire somehow freakishly, yet awesomely, generates electricity that is stored inside the Voto that can be used to bring your phone (or other usb device) back to life. Make two batches of mac and cheese over that campfire, and you’re a got-dam Frankenstein bringing electronic shit back from the dead. Crazy. The only downside is that all Voto products are only currently available in Kenya – which can be a plus, since they have lions there, too. 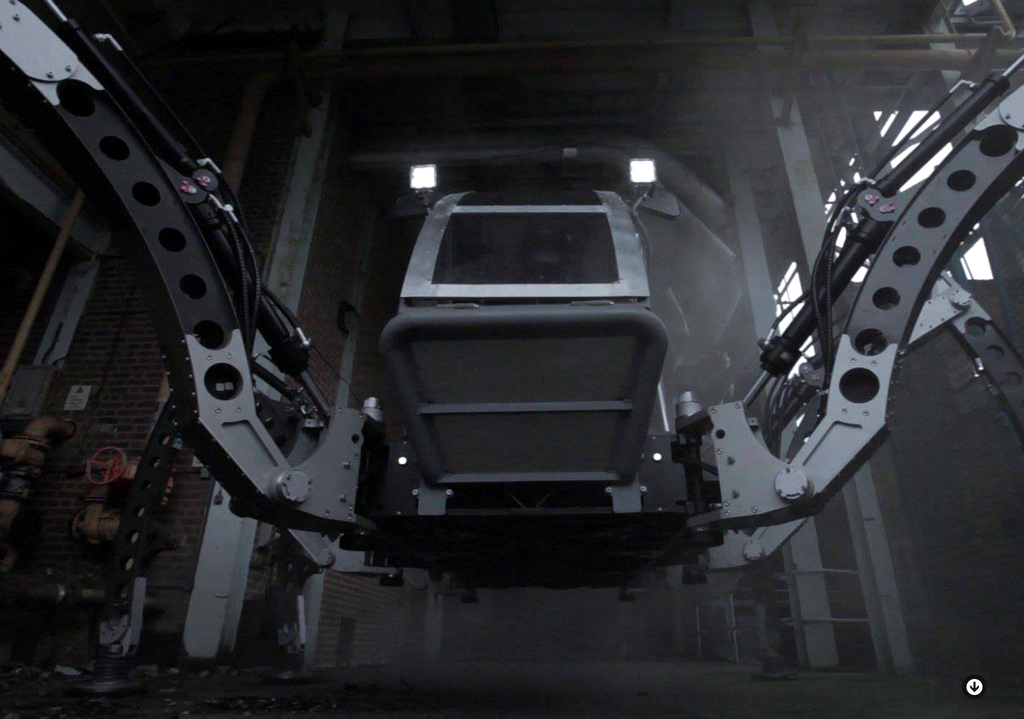 This is what happens when slightly dangerous British people get bored. Normally these guys develop much smaller hexapod ‘bots for movies and industrial applications in the name of science. But somehow, somewhere, one of them got the idea to go “big” – and they built a 2-ton robotic crawling monster. At just shy of 16 and a half feet across, this 2.2L turbo diesel-powered beast can be piloted (there’s a pod for that) or remote controlled via wireless interface. All the technical stuff like hydraulic actuators and sensors aside, all you need to know is that there’s enough computing power to let you terrorize a small town in this six legged son of a bitch. It even has wifi – so feel free to check your Gmail while forcibly extracting your neighbor from the hiding spot in his house as your rampage begins. We welcome our new robot overlord. 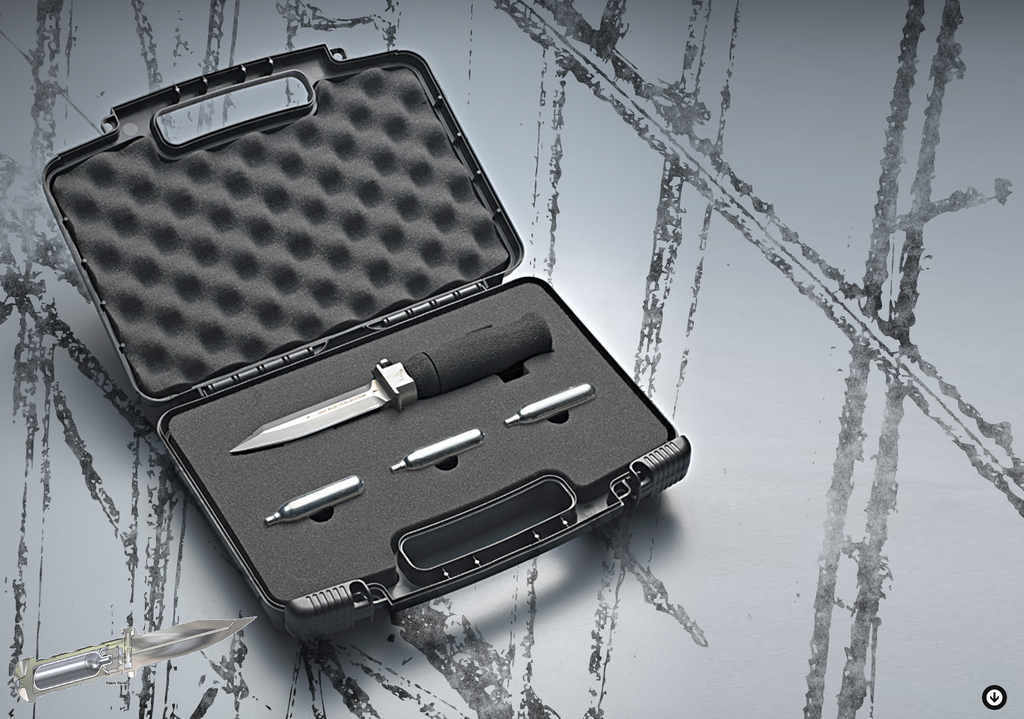 You must be diving on some truly strange shit if you see the WASP and immediately say, “I need this.” It’s another world underwater – an up-close view of elusive and exotic creatures that may or may not want to kill you; and that’s the gamble. So if some nutty creature that’s all teeth and tail chooses option A, you can fight back. But you don’t bring a spear gun to an underwater knife fight – you bring the WASP. Divers know all about the effects of compressed gases underwater – some seriously wicked stuff, Pulmonary Barotrauma (aka burst lungs) happens when expanding air is caught in a diver’s lungs as he ascends…leading to damage such as Arterial Gas Embolism – which is as bad as it sounds, and one reason why you don’t hold your breath when you’re diving.?And that’s the same magic in the handle of the WASP’s Injection System…as if stabbing a pissed-off fish with a 5.25″ blade isn’t enough, it shoots a freezing-cold, 800psi ball of compressed gas out of the tip that’s now embedded in your attacker. The gas causes over-inflation, freezes the organs and tissue in the stab area, and sends the threat to the surface before the blood chums the water – alerting its friends to a fight. 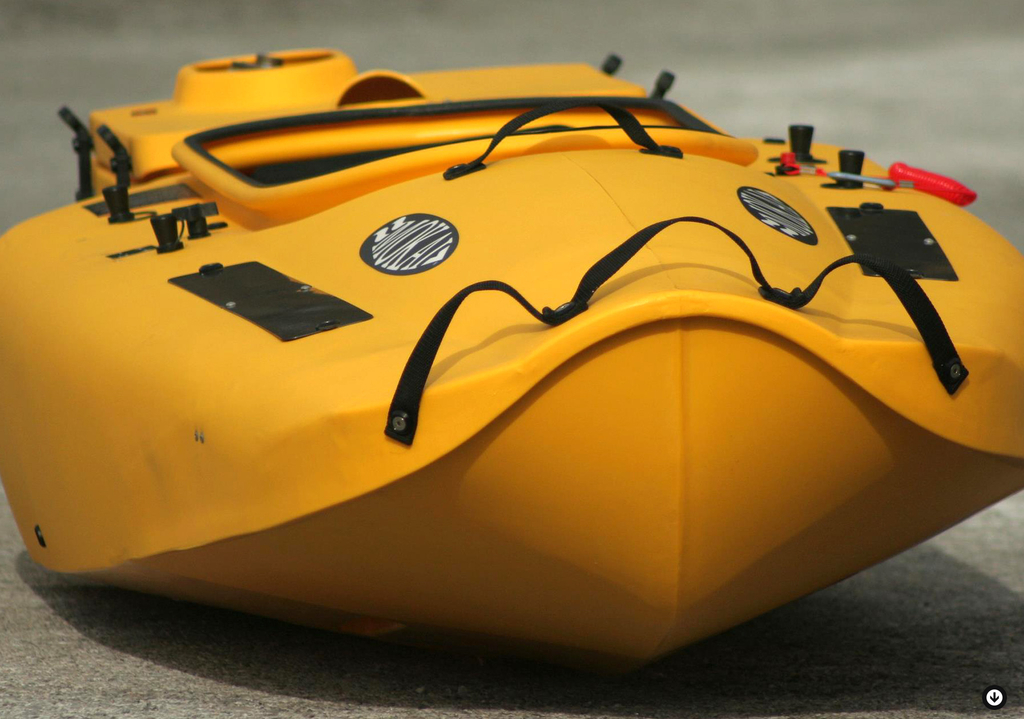 It’s time to put that old saying – “up a creek without a paddle” – out of its misery…because paddles are for suckers. And don’t give us that “it’s good exercise” bullshit, either – save your energy to do something fun when you arrive at your destination, instead of using it up getting there. Powered by Subaru’s EX21 electric start 4-stroke engine, the ES-Kape is fitted with Mokai’s proprietary jet drive allowing you to navigate shallow (or deep) water and river hazards without breaking a sweat. The hull is polyethylene, which nests together for easy transport, cleaning and storage. Assembled in under 2 minutes with no tools required, you’re the captain of your own one-man, 11′ 3″ cruiser that can haul up to 360 lbs. That’s pretty solid cargo room – one of their customers bragged that he went back and forth between the American and Canadian shores, about a ¾ mile distance. Which will come in handy, if we ever decide to make good on that black market maple syrup trafficking route we’ve been talking about. 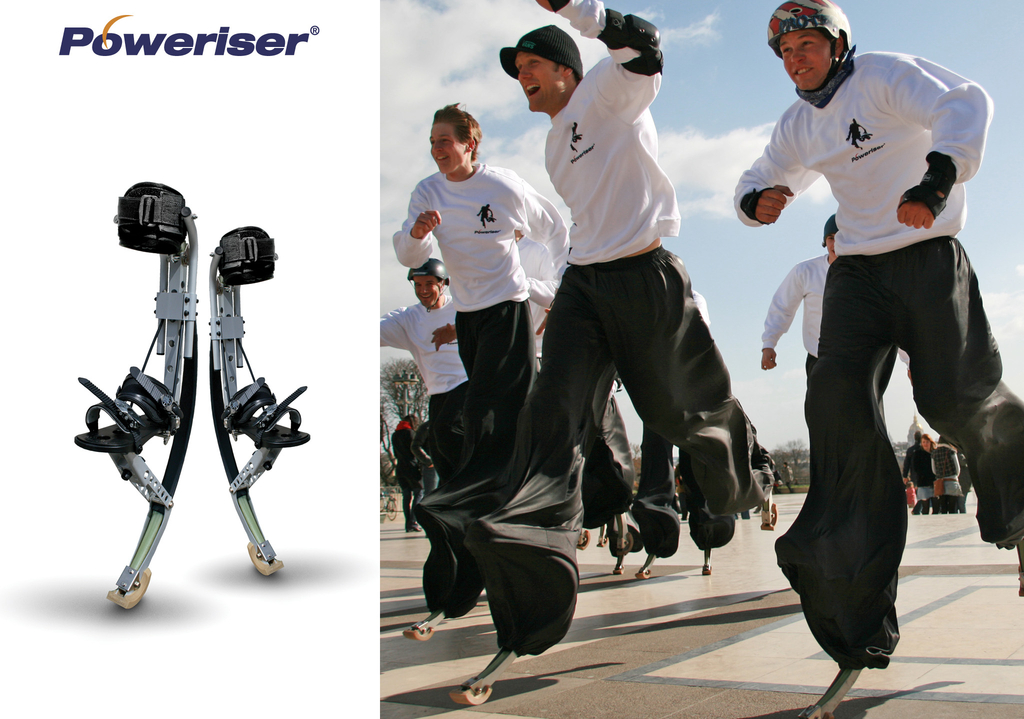 The description on their site even reads like the intro to the Six Million Dollar Man: “better…lighter…tougher.” We’re just waiting for someone to say, “We can rebuild him,” because these guys have the technology. Now, we’re not saying you’ll be a modern-day Steve Austin the minute you strap these go-go-gadget legs on – but the thought of going all cyborg and going for a 20mph jog makes the idea of getting off our fat asses for a change pretty entertaining. There are (supposedly) some muscle toning and strength training benefits, but who cares? You can literally jump tall buildings in a single bound, as long as the buildings are around 4 meters (save the calculator – that’s around 12 feet) high – your fear of heights notwithstanding. But given the adrenaline rush associated with becoming a superhuman pogo machine, we’ll take our chances. Imagine the possibilities, if you used them on a trampoline…