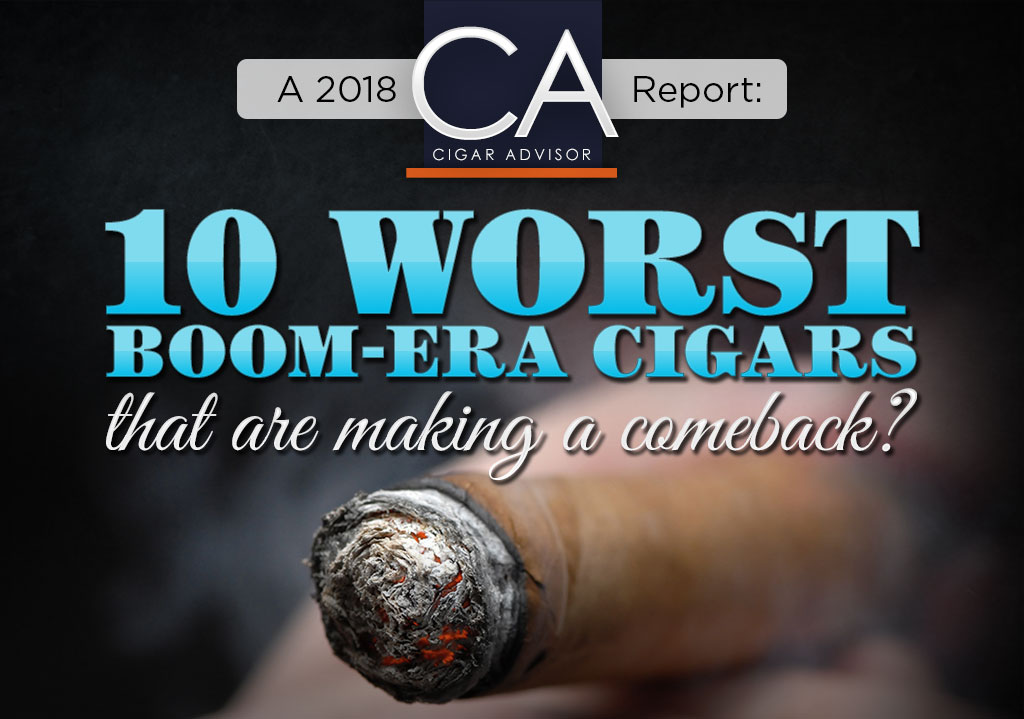 OMG: 10 WORST Cigars of the Boom-Era…That are making a Comeback?

The cigar boom of the mid-to-late 1990’s was an explosive time for the industry. Everybody and their third cousin started smoking cigars, and premium aged tobacco was actually all the rage. Cigar stores, bars, and clubs were popping up everywhere, and even gas stations and bodegas had humidors on their counters. It was a great time for the industry as many of today’s most loved brands established themselves as players that were here to stay. But, like anything else, with the good, always comes the “not-so-good”, as well.

You see, a lot of god-awful brands were flooding the market; some of the worst cigars were the offenders made with poorly rolled, under-aged leaf, from companies being run by guys who were selling shoes and teaching high school math only several months earlier. The industry became over-saturated with a whole lotta crap, as growers in Nicaragua, Honduras and the DR were turning ball fields and parking lots into make-shift tobacco farms, and the final products were being rushed to market way before they were ready to smoke. You’d open up some of these boxes where the smell of ammonia could have knocked the horn off a charging rhino.

I remember walking the massive Opryland tradeshow floor in Nashville back in ’97 while listening to every one of these new cigar salesmen spewing their uneducated bullshit… “Shhhh, don’t tell anyone, but there’s actual Cuban tobacco in our blend”…“Our head roller worked on the Opus X line for Fuente”…“A direct descendant of Jesus is our master blender”… yada, yada, yada.

Which brings us to the point of this most frightening article…there are a number of these pathetic excuses for premium cigars that are grandfathered under the new FDA rulings, and I found ten of them that are making their dreaded comeback. Some of these brands were the worst of the worst, and I’m here to tell you about them so you stay far, far away. I promise that you will thank me for my arduous and lengthy research.

The stupid one, indeed, referring to anyone who would put this vile weed to their mouth. This hand rolled lip-blister has notes of fence post, wet concrete, and rusted roofing nails. Anyone who ever smoked this, actually saw a decrease in their measurable IQ, hence the descriptive moniker. And, just one look at the guy’s clueless stare on the label, and you’ll know that this is brain damage in a box.

F75 by Padron Maduro: Full-bodied and wonderfully complex with notes of dark chocolate, cinnamon and black cherry. As good as a cigar gets.

You know about Sun Grown leaf, and Shade Grown, too, but here’s a cigar that’s made exclusively with tobaccos only grown at night. A real favorite with werewolves and vampires, this cigar is even greener than Candela due to the complete lack of sun light, as we’re sure that the blender had a complete lack of his mental faculties. Among the worst cigars (and ideas), this stick is so tasteless that it has no notes.

Okay, so I’m Polish and I have never heard of this so-called dance, so I asked my Uncle Stosh, and he told me it’s a 400 year-old ritual involving freshly mixed mortar and a live chicken. What’s amazing is that this kielbasa shaped figurado tastes exactly like potato-filled pierogies with fried onions. Uncle Stosh says they’re delicious, as he ate three boxes of them just this past week.

Cunning by Joya de Nicaragua: Mellow in body but quite flavorful with a rich nuttiness and hints of caramel. 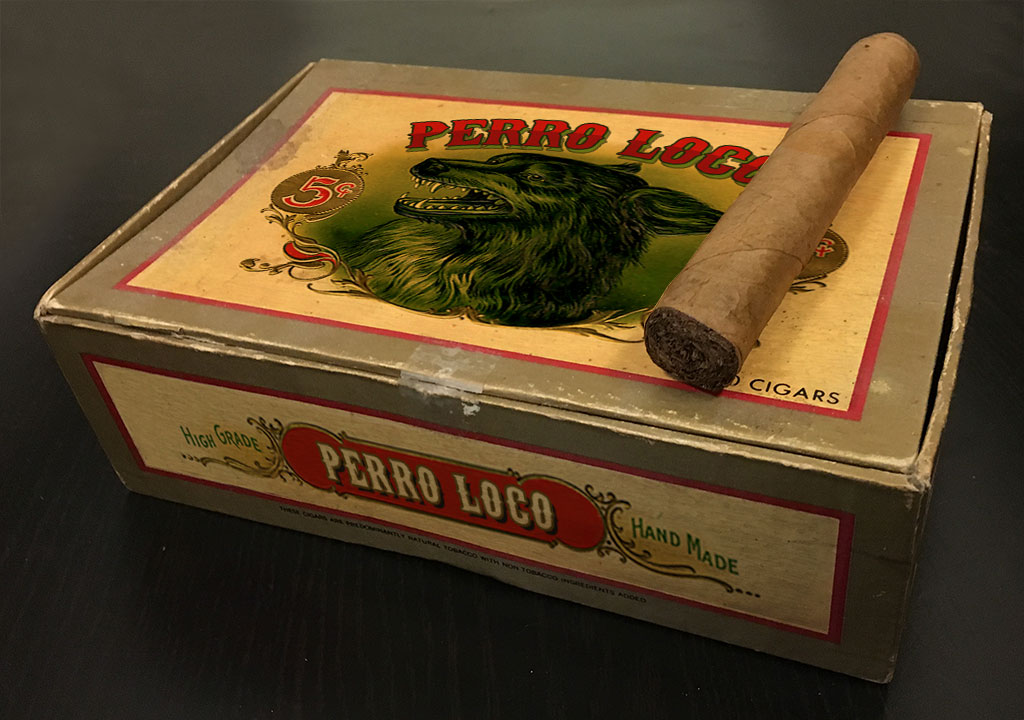 Translation: Crazy Dog, and within every box is a pile of 20 fresh and steaming canine turd rockets. This dog’s bite is as foul as they come, with powerful notes of ring worm, fur ball, and flea powder. Aged for three whole days in used, beat-up boxes, I’m telling you that somebody needs to put this mangy mongrel to sleep.

Yet another cigar of the animal kingdom, this equine road apple has four distinctive tricks going for it: It looks like crap, it’s rolled like crap, it smells like crap, and, as you may have guessed, it tastes even worse. This woeful nag will saddle you with pungent notes of fresh hay, stable boy, and rolled oats, with a dismal finish that comes in dead last every time. Heeeey Wilbur, don’t make me smoke these again…

Inferno Melt by Oliva: Full-bodied and full of complex flavors like dark coffee bean and earth. If you like the headier stuff like Oliva Master Blend, you’ll love this one.

The name suggests that these discarded tobacco scraps from the torcedor’s tables is indeed from the famed Fuente Family of the Dominican Republic, when in reality, they are from a guy named Arturo Farnsworth’s garage in Newark, New Jersey. While he won’t divulge his family’s secret blend, we can tell you there are distinct notes of cement dust, power steering fluid, and WD-40. It’s the only cigar made that smells like you drove with the emergency brake on.

Olor Nicaragua Sun Grown by Perdomo: Medium-bodied and brimming with rich flavors of cocoa, earth and just a hint of black pepper.

Translation: Crazy Lady, named after the puta that master blender, Manuel Labour had as his side fling for several long and checkered decades. Grown at an undisclosed vega not far from the Tijuana border, the tobaccos in this distasteful wench has overpowering floral notes reminiscent of a hooker’s couch. Don’t ask me how I know, let’s just all agree that I read it on the interweb. The worst cigars ever to come out of Mexico; we caution you to wear protection when smoking this foul beotch.

Shadow King by AJ Fernandez: Full-bodied with a peppery start that smooths out to notes of black coffee, dark plum and chocolate.

Now here we have pure marketing genius – a cigar named after donkey poop. Boy oh boy, now that’s something I want to light on fire and then suck on for an hour. With luscious notes of barnyard floor, animal flatulence, and human sweat, this is the cigar for the man with absolutely no self-esteem whatsoever. It’s the only cigar to ever receive a single digit rating in Cigar Aficionado.

601 Kryptonite by Espinosa: Medium-bodied with cedar and citrus notes with superb construction and draw.

Also known as Johnny’s Waddle, it’s the world’s first commercially made 150 ring cigar, and at five inches in length, you basically have to have lost a bet in order to attempt to smoke this obese robusto bastid. A definite candidate for gastro-bypass surgery, the Chubbo is filled with 17 pounds of stale tobacco and takes roughly three whole days to smoke. The company had Black & Decker build a cutter for it along with its own bbq propane tank for lighting. Dude, come on, have a salad. Packaging: One per crate.

Intemperance Whiskey Rebellion 1794 by RoMa Craft: Full-bodied with a ligero kick that is not for the beginner. Leather, earth and strong coffee make this a full-flavored treat.

They say that the owner of this cigar factory on a tiny island in the South Pacific is actually a front for running numbers and Nigerian telemarketing scams. But they actually do make this porky puro with leaves grown all on that island. They don’t actually say what kind of leaves, but one puff assures you that swollen glands and a bad case of trench foot are not far behind. The tag line, Smoke Like an Angry Pig, has won several prestigious branding awards given out by men with machetes and masks.

Davidoff Famous 75th Anniversary: Medium-bodied with a chocolate brown Ecuadorian Habano wrapper that is as smooth as silk. Notes of sweet cocoa, wood and coffee lace the palate on this exquisite premium offering.

So, there you have it – my official warning that will help you avoid the worst cigars of the Boom Era, at all costs. If they do make it to market, make sure to cover your nose and run out of the walk-in humidor if you see them.

I laughed my hairy arse off.

Swing and a miss on this article.

Omg this was great!! This is why i love shopping from you guys.

Killing me with the jokes….good fun for all….think CI tried to send be the burro poop in a 10 pack for 79.99

The dominican has yet to make a decent cigar.

Tell that to Arturo Fuente and Ernesto Perez-Carrillo, and at least a half-dozen other factories.

Reading Time: 7 minutes The Playlist has expanded: we’ve added four more killer cuts, along with some tasty premium suggestions to smoke alongside them…click NOW for Volume 4 of pairing music and cigars, and see what you’ve been missing!