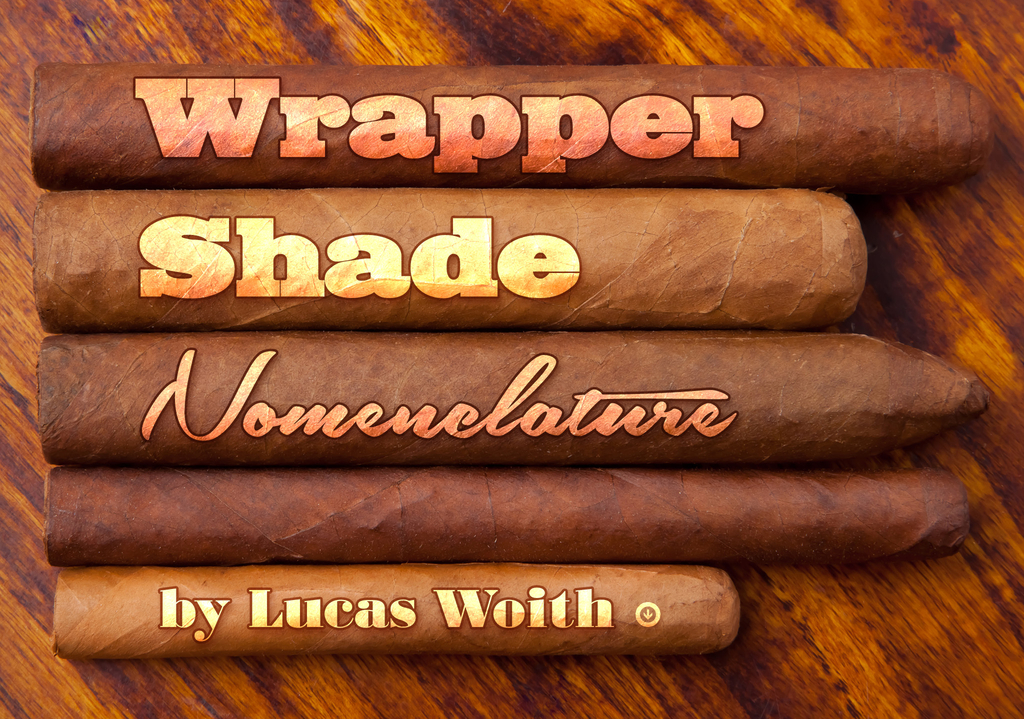 One of the most daunting tasks for a cigar smoker, whether new or experienced, is understanding all the different types of wrapper leaves available on cigars. When I first started smoking cigars thirteen years ago, I held the misconception that the darker the wrapper shade of the cigar, the stronger the cigar would be. I knew next to nothing about the nuances and qualities of different wrappers, and really only knew two: natural and maduro.

As I’ve grown as a cigar smoker, I’ve been amazed at the differences in flavor that one thin layer of tobacco can add, as well as at all the different shades and colors, from light green to black, that are available.

Some of the names can be confusing, since they’re often used interchangeably, and in different ways by different manufacturers.

When you hear about a natural cigar wrapper, you’re thinking of a light brown, pale cigar. Most cigar companies use the term natural to describe a number of actual cigar wrappers, including Connecticut, Claro, and many others.

Connecticut wrappers, like the name suggests, are grown from Connecticut seed tobacco, usually in the United States or Ecuador. They are often grown under giant sheets of cheesecloth, which limit the amount of sunlight that reaches the plants, thus giving them a paler color and milder flavor.

Claro is a generic name for any wrapper that is a light brown in color, including the Connecticut. These wrappers are light and mild in flavor, and allow the strength and flavor of the filler and binder to come through.

Maduro cigars have a characteristic dark, dark brown color, which comes from the extended fermentation of the tobacco. Maduro, which means mature or ripe in Spanish, actually describes the aging of the leaf, as opposed to an actual type of plant. The process is time consuming, taking several years to reach the desired color. Maduro-wrapped cigars have an inherent sweetness to them, since the longer aging process brings out the natural sugars in the leaves.

When you get outside of natural and maduro, there are several wrappers that have tremendous flavor and are making a name for themselves in their own right. Some of the most popular are Cameroon, Oscuro, Candela, Corojo, Habano, Sumatra, Criollo, and Rosado.

The Candela wrapper, also known as double claro and American Market Selection, is characterized by its pale green color, and a light, slightly sweet taste. It’s not super common anymore, but is starting to make a comeback with cigar makers like Illusione, La Flor Dominicana, and Rocky Patel. This leaf is picked before the plant is 100% mature, and is aged for a short period of time, leaving some of the plant’s chlorophyll intact.

Cameroon wrappers, as their name indicates, are grown in the African country of Cameroon, using Sumatra tobacco seeds. They are very thin and covered in tiny bumps, a texture referred to as “toothy.” They lack a lot of the natural oils in other tobaccos, and are therefore very brittle. It can often be a challenge smoking a Cameroon cigar in the winter, when humidity levels are too low outside. It is also one of the most notoriously difficult tobaccos to work with.

Corojo tobacco was originally grown in the Vuelta Abajo region of Cuba, but most is now grown in Honduras, at least for the American market. Corojo leaves tend to be spicy, with prominent notes of black pepper, adding a nice kick to the cigars.

Similar to the Corojo leaf is the Habano wrapper. Grown from Cuban seed, the Habano is a spicy, strong leaf packed with flavor. For the most part, they are grown in Nicaragua, which has soil conditions that are conducive to growing strong tobacco.

Rosado wrappers, also known as a Colorado Claro, have a dark reddish color to them. Rosado is a very rare wrapper that is prized for its flavor. It’s hard to grow outside of Cuba, and has been used lately for limited edition cigars by companies such as Tatuaje.

One of my favorite wrappers is the Oscuro. This leaf, which is black in color, is fermented longer than a maduro wrapper, and has a sweetness to it that is hard to replicate, yet still packs a punch with a black pepper finish. For the average cigar smoker, an Oscuro cigar can be daunting, but they’re not necessarily overpowering.

Cigars with a Sumatra wrapper tend to be on the sweet, mild side. The wrapper, originally grown in the Indonesian island of Sumatra, is now grown mainly in Ecuador, from Sumatran seed. The wrapper has minimal flavor, but will enhance the flavor of the binder and filler. It is a popular choice among infused cigars.

Criollo used to be one of the most popular tobaccos for the production of Cuban cigars, but was replaced by the more flavorful Corojo leaf. However, it was eventually discovered that Criollo made a great wrapper for cigars if grown in the shade. Criollo was then grown in Nicaragua and introduced to the American cigar market by Cupido in 2001.

There is an old adage that says you shouldn’t judge a book by its cover, and the same goes for cigars. Many cigar enthusiasts think that the darker the cigar, the more powerful it will be. While there is a correlation, it’s not an absolute by any means. The wrapper is just one part of the cigar, but it’s the one you see the most. Taking the time to learn about different wrapper varieties and leaves can aid in your understanding of cigars and help you pick out your next smoke.

FDA Cigar Legislation: How The FDA Took My Stogies Away