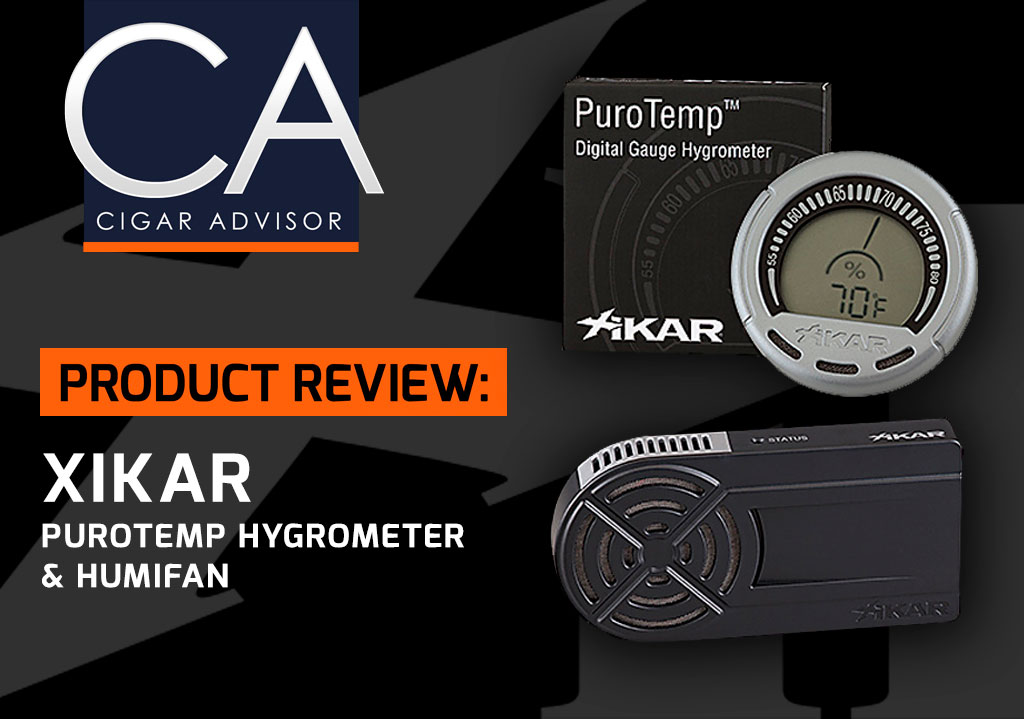 The engineers at Xikar have been at it again, coming up with new ideas that make the lives of cigar smokers everywhere easier. Renowned for their patented Xi cigar cutters, Xikar has also been active in designing a variety of other useful cigar accessories, including two new in-humidor devices: The new Xikar PuroTemp™ Digital Gauge Hygrometer and Xikar HumiFan™ Humidor Air Circulator. 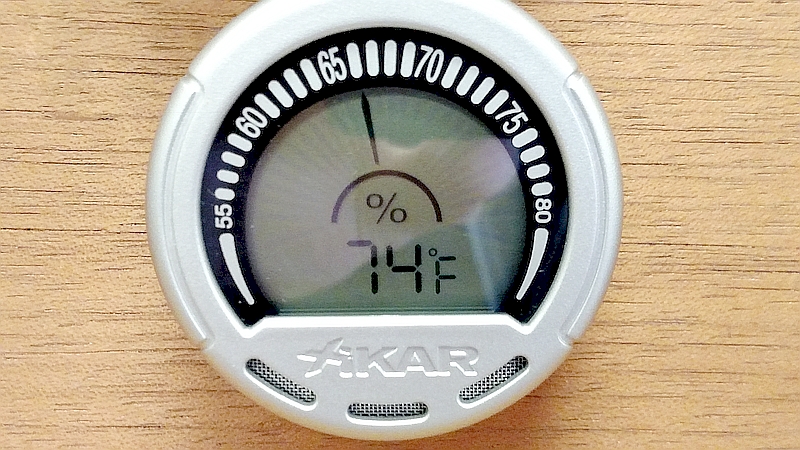 Digital hygrometers have become the standard among most cigar smokers for their accuracy and ability to perform a number of functions. For their Digital Gauge Hygrometer, Xikar kept it simple in terms of functionality, while the design resembles an old analog model with a 21st century twist. Pre-calibrated for accuracy within +/- 2% at 70%, the digital hand that displays the RH (relative humidity) level, works like the speedometer in your car, and the oversized digital display makes it easy to read the temperature in your humidor.

Being a stickler for accuracy, myself, I decided to see just how the baby operates. The hygrometer comes with a CR2025 battery, has a magnet mount, and its small footprint and narrow width make it easy to place just about anywhere you like in your humidor. I matched the Xikar PuroTemp up with my similarly designed Western Digital model – also extremely accurate – and after 24 hours in my desktop humidor, the numbers on both units were identical at 67%. For the second test I moved the PuroTemp to a cabinet humidor with a Cigar Oasis Plus that’s set to 69%. After a day in the cabinet, I noticed the Xikar PuroTemp was reading at 64%. I’ve always suspected the cabinet humidor was leaky, so I moved the Western Digital model in with it, and both models came up with the same result, except this time they read 66%. Guess I’m gonna have to fix that leak.

The verdict: The Xikar PuroTemp™ Digital Gauge Hygrometer works pretty darn well. I also noticed that the gauge reacts to conditions very quickly, which tells you that the unit is extremely sensitive. After opening my desktop humidor, it only took several seconds for the hygrometer to compensate for the humidity in the room. 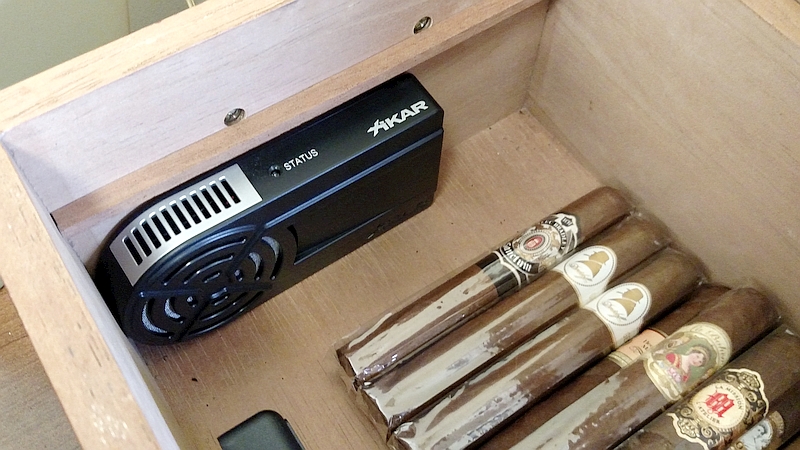 Next up in our Xikar product review was the Xikar HumiFan™ Air Circulator. I’ve always wanted one of these, too, because air circulation in a cigar humidor helps keep the humidity level constant, and that means a more stable environment for your precious primos. At just under 6″ long by 3″ wide with a depth just under an inch, the HumiFan is just the right size for most medium to large desktop humidors, so there’s more room for your cigars. The unit includes four AA batteries, so there’s no need for cords or cables, and since it’s pre-programmed, all you have to do is place it against one of the walls in your humidor, close the lid and forget about it.

The Xikar HumiFan appears to have been designed for maximum benefit to both your cigars and to its own life cycle. Once the batteries are installed, the fan runs for 15 seconds every 15 minutes. This gives the unit just enough time to recycle the air in the humidor while extending the life of the batteries. An LED on top of the unit flashes green every 30 seconds letting you know that it’s working. Since I don’t have X-ray vision, I first tested the Air Circulator out of the humidor by placing a piece of tissue over the fan vents. Sure enough, every 15 minutes, like clockwork, the little piece of tissue blew upwards for 15 seconds. 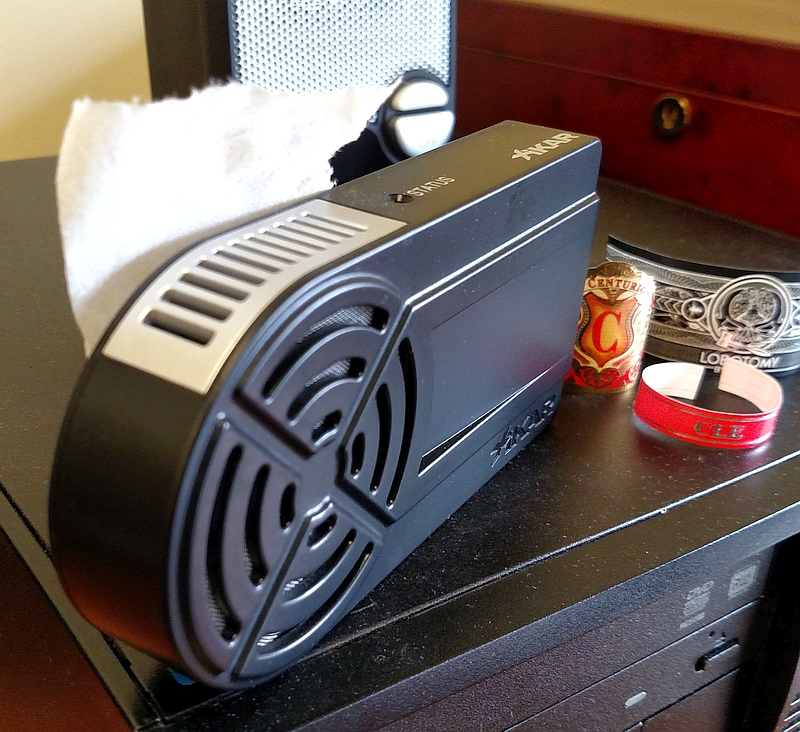 The Xikar product review verdict: The HumiFan worked exactly as described in the product sheet, and over the course of several days, I noticed that my hygrometer was reading more consistently, too. So, there is something to be said for keeping the air in your humidor circulated on a continual basis.

Reading Time: 8 minutes It promises “plenty of big, bold flavor,” so the Cigar Advisors put a torch to the fiery new Romeo Esteli Robusto, to see just HOW big and bold. Watch now and see how this spicy treat performs for our panel in our this Romeo y Julieta Esteli cigar review…