Memorial Day Savings: Use coupon code 20MEMORIAL for 20% off your order of $150 or 10MEMORIAL for 10% off your order of $75
0 cart
account
cigar auctioneer cigar monster cigar advisor close
Cigar Deals!Deals
Shop bydepartment
X
Get Free Shipping
We'll email you a promo code for FREE SHIPPING on your first order of $75 or more, when you sign up for our incredible email deals.
»Oliva Connecticut Reserve Cigars Online for Sale 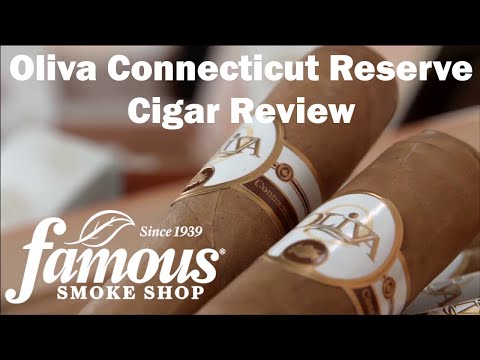 A beautiful blonde Ecuadorian wrapper caps a diverse blend of Nicaraguan long-fillers in these Oliva Connecticut Reserve cigars. The result is a milder smoke that doesn't sacrifice the richness of its core blend. The Robusto is earthy, creamy, and nutty, with sweet wood and spice notes. Order now!

96% of reviewers recommend this product
read all reviews write your own review
Prev 1 2 3 ... 5 Next
5.0 stars
Its a good smoke
for Oliva Connecticut Reserve Robusto
by Stillman in Kentucky on April 14, 2021

... read more
5.0 stars
THIS HAS BECOME MY FAVORITE MILD CIGAR
for Oliva Connecticut Reserve Robusto
by James C. in Unknown on February 25, 2021

This has become my favorite go-to mild cigar. I haven t tried that many but I always come back to this one. In fact, I have found that I usually prefer medium bodied cigars because I find most mild ones are too dull and lack flavor. Might just be my palate developing. Regardless, this Oliva Connecticut Reserve is the exception so far. Every first few draws after lighting up I remember how tasty this one is. In fact, it has gotten better with each one. I pick up new flavor notes almost every time. A really enjoyable moment indeed. I ve had 6 of those so far and enjoyed each and every one of them. I let them rest in the humidor a strict minimum of two weeks before lighting up as I do with all cigars. The burn isn t razor sharp but I never had to touch up a single one of em. The draw with a v-cut alone is sometimes a tad too restricted barely for my taste so I tend to go with a straight cut or a v-cut 2-3 pokes of the PerfectDraw tool.

This cigar has become my favorite everyday smoke. It s well constructed and burns even. Excellent draw., nice mellow flavor, no harshness at all.

I was pleasantly surprised with those cigars. Very mild in terms of flavor, although it gets more pronounced after the first third. Smooth and lightly creamy. Great smoke production, nice draw and admirable burn. Great construction and after taste too. Pairs very nicely with a creamy coffee in the morning.

I have always liked them until the last 5 pack. All five were soft with hardly a draw and were terrible. I would like to get them again but I fear they would be no good. I will try them again sometime in the future.

I will start by saying I m a little biased, I have become a huge fan of Oliva cigars as of late, having sampled the majority of what s in their arsenal, and this stick was a pleasant surprise. Traditionally, I don t smoke Connecticuts because they just seem to lack the flavor profile I typically enjoy, HOWEVER, this was an exception. This cigar had lots of smooth creamy flavor, similar to caramel popcorn. The draw was spot on, the smoke was thick, the burn line was pencil thin, and the smoke was thick. I seriously didn t want it to end, to the point I think I burned my lip from drawing while I had maybe a quarter of an inch still left. I did develop a small split while smoking, right above the band, but it didn t effect my experience, and it was probably due to smoking a Connecticut in the cold. Trust me when I say that you can t go wrong with this cigar.