Take $50 Off Your $200 Order With Coupon Code BLAST50 or Click Here To Activate!
0 cart
account
cigar auctioneer cigar monster cigar advisor close
Cigar Deals!Deals
Shop bydepartment
X
Get Free Shipping
We'll email you a promo code for FREE SHIPPING on your first order of $75 or more, when you sign up for our incredible email deals.
»Punch Sucker Punch Cigars Online for Sale 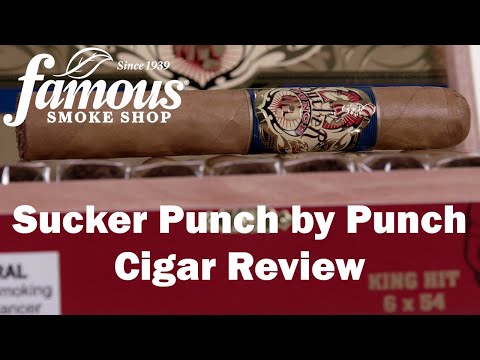 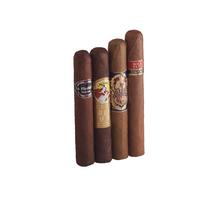 Punch Sucker Punch cigars are delicious to the nub! Lights out is stuffed with aged Nicaraguan fillers, finished in a toothy Connecticut. Medium-bodied smoke captures notes of cocoa and cream, so good you might as well tuck yourself in afterward one of these. Find your favorite Punch cigars at Famous!

100% of reviewers recommend this product
read all reviews write your own review
5.0 stars
Aweful cigars...
for Punch Sucker Punch Lights Out
by Bruce Stokes in Indianapolis on February 12, 2022

These things tasted bitter and did not smoke well. I would not recommend. They were totally un-enjoyable!

Got these free, they are now my favorite cigars.Great taste, burns well, good draw.

Don't smoke them until they have at least two weeks of humidor time. After that, you are good to go. Starts out very strong but settles down at halfway point. The flavor profile is delicious. Full of gooey caramel followed by cocoa and creaminess. I want more.

... read more
4.0 stars
Sucker punched with a tickle
for Punch Sucker Punch Lights Out
by James Rosenthal in Baltimore, MD on July 30, 2017

So I love Punch and Hoyo cigars. Like Dunhill pipe tobacco, they have a special spice to them that nothing else has and scratches a particular itch. I expected by the name that this would be a heavy hitter-Sucker Punch-it screams surprise pain. But the real surprise here is how absolutely light, easy and flavorful this cigar is. You know when you toast a marshmallow over a wood fire and you get the crusty burnt outside and soft gooey inside-yeah, it s that...as in the flavor, exactly like that. Sweet marshmallow and charred hardwood. It s not very complex and doesn t have the same cinnamon/cedar spice that Punch normally has but it has the subtle sweetness of the Hoyo s and that little extra zing that Punch has. It s clearly the same family, it s not trying to be anything it s not. No it s not a $30 stick at a $4 price, but it s a perfect daily smoker to lighten up from Punch or step it up from mellow Hoyo-right in the middle.As other have said, this needs a few days/weeks in the humidor. I smoked one the day I got them too excited and couldn t wait and the draw and burn were awful-but I got a sense of the flavor. Let them sit for a week and they are now perfect for draw and burn no not razor sharp but choppy waves around the ring

The new Sucker Punch blend from Punch is aptly named. It comes to you in a disarming pale, khaki, Claro wrapper looking for all the world like just another mild cigar, but its flavor, strength, and body place it squarely within the medium range. My general impression is of a spikier, less genteel version of the Punch Grand Cru Selection. The same dominant cedary note is present, along with a grassiness that is absent from the Grand Cru, and which I normally associate with younger filler tobaccos. I don't know this for sure, but I'm willing to bet the filler bunch here is not aged nearly as long as that of the Grand Cru. Also there is the wrapper itself, which evinces the longer finish and more pronounced nuttiness that I have come to expect from Connecticut Shade wrappers grown in Ecuador as opposed to those grown in the United States. The Grand Cru uses the U.S. variety, while the Sucker Punch uses the Ecuadorian. Overall, it is a pleasant and satisfying smoke with a slightly looser draw and faster burn than most Punch cigars. I personally don't find the grassy flavor objectionable, but if you do, I would guess six months to a year of aging will shave that right off. However, I would not age these beyond a couple years, maybe three at the very most. My experience has been that cigars in the lower medium range of strength and body can get rather bland rather quickly with long term aging.

... read more
4.0 stars
Good, But Not What I Expected
for Punch Sucker Punch Lights Out
by Pete in Central, NY on September 04, 2014
Verified purchase

Being a Punch fan for many years, these are a step away from their norm. Great morning cigar, light easy draw and smokeable to the nub.Unfortunately I never found the sucker punch they lay claim to, but maybe a left hook near the nub. They burn a little quicker than you would expect for a 52 ring size. Tasty and satisfying from start to finish, but I would have liked just a bit more strength. However this cigar fulfills a much needed void in the Punch lineup.

This does start out as quite mild, but the flavor intensifies as you reach the last half or bottom third without becoming too harsh. Burn was even and consistent, although slightly fast. Overall, a pretty good smoke.

I tried a 5 pack. The flavor was great. They actually get better as you smoke them. I think they get stronger nicotine towards the end but the flavor stays medium in strength. 3 of the 5 had a tight draw and 1 had twigs which my cutter had difficulty with so they could use attention in the construction department.