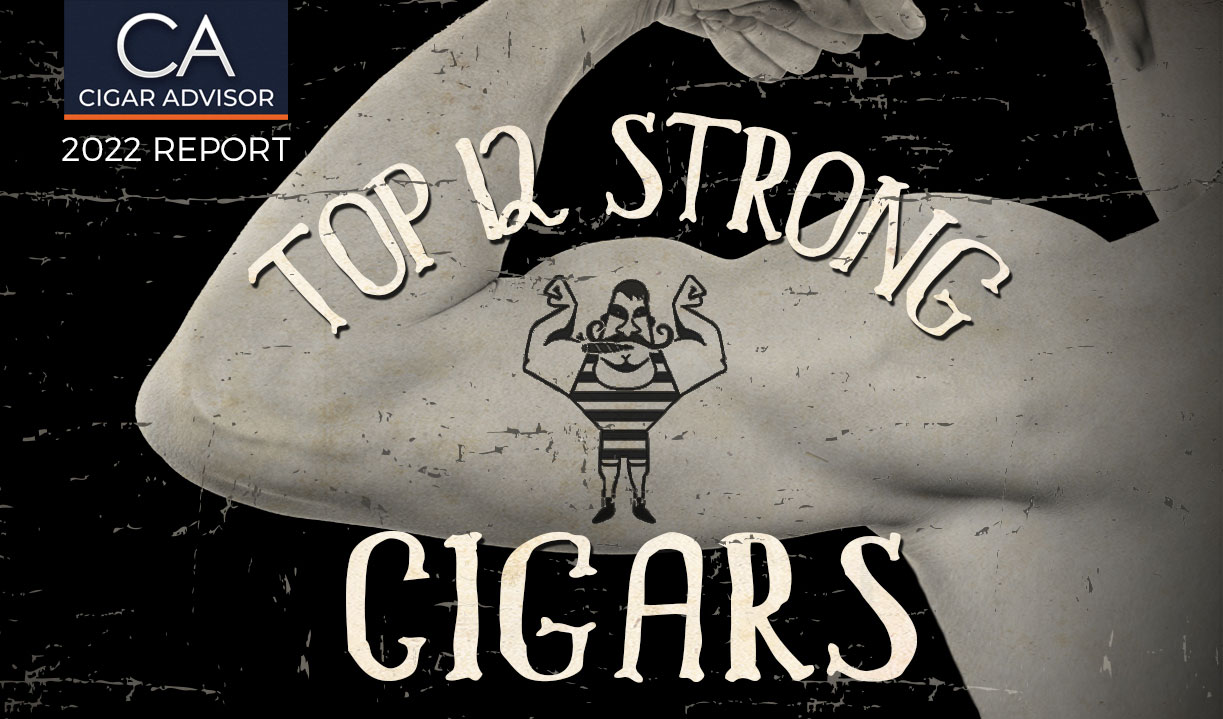 You enjoy the rush…soaking up the Vitamin N. You love the way your smoke elbows you in the gut while still satisfying with flavor. Understandable – who, among us full-bodied smokers, doesn’t appreciate a cigar that packs a punch?

The primary reason a cigar is strong: Ligero. These leaves are the high primings, found near the top of the stalk. As the lower leaves are harvested, the plant focuses more of its growing energy and nutrients into the sun-soaked leaves that remain. Some growers even let them over-ripen to brew a little more power, body, and complexity. More sun = thicker, more powerful tobacco. If you look at the foot of a cigar, it is often the Ligero – those darker leaves – that you see at the core.

It’s important to remember that strength and body are not descriptive twins – they’re more like blood brothers. Strong cigars can be full-bodied, but not all full-bodied cigars are strong; one is a comprising quality of the other.

Let’s do this thing…

Before I knew what it was, I was foolhardy enough to smoke one before dinner…after a light lunch, no less. I won’t make that mistake again. Southern Draw’s Jacobs Ladder might be the strongest of the full-bodied cigars out there. It’s at least the most potent stick I’ve ever smoked. The small-ring Lancero boosts that intensity even higher, sending a blast of pepper that could probably be seen from space. What impresses me even more is that it still brings top-shelf flavors to the table. It might not come with a waiver, but it probably should. Either way, it’s totally worth it.

Choosing between 601 cigars is like arguing whether Fat Man or Little Boy was more devastating. So, where the kick of Erik Espinosa’s 601 Steel administers a sound beating to your senses, it’s the Warhead VII’s brawn that gives it the edge here. An equilibrium-impairing amount of all-Nicaraguan Ligero long fillers and binder core team up with a Nicaraguan Broadleaf Maduro wrapper for the ultimate Espinosa powerhouse. If it’s unbridled strength you seek, 601 does not disappoint.

Some say it’s “the original Nicaraguan power cigar.” Others call it “the last thing I remember before passing out.” Raw, rude, and unadulterated strength blisters from this oily, aged Joya puro. Let’s put it this way: when they say they’ve “tamed the blend a bit” for their newer (and still rich) cigars like Joya Red, you know this thing is a top-of-the-power-heap beast. Novices beware.

Triple Maduro? More like three-prong attack. The name says it all: the pitch-black wrapper, binder and filler are all Maduro, and mashes the gas pedal with enough power to throw even the most seasoned vet back into his seat. I once heard someone say this cigar “wasn’t overpowering.” Liar. Smoke it on a full stomach – you’ll thank me later.

Hey, Studio Tobac – what did we ever do to you? Cain F cigars were already aggressive…and here you go and make it over in shorty form, drilling down to that Nub sweet spot and overfilling it with power. Cain F Nub is fierce in its simplicity: long-leaf Ligero on the inside, Ligero wrapper on the outside. This cigar doesn’t just smack your taste buds; it kidnaps them and demands ransom. You’ve been warned.

The strongest Punch cigar of them all, Gran Puro packs more heat than a Rambo sequel. It’s as spicy as the day is long – and thanks to the extensive use of sun-grown tobaccos, wallops the taste buds with flavor. Because each member of this flavor gang wants its turn with you, Punch will hit you; prop you up, and hit you again. Bonus: incredibly affordable, which means you can get Gran Puro for $5 per beat-down.

You can’t have a who’s strongest contest without including the legendary Fausto. Pete Johnson made sure of that with a recipe calling for the highest priming Nicaraguan tobaccos wrapped in a peppery Ecuador Habano Maduro leaf. It’s zesty, spicy, and it’ll make your brow sweat, guaranteed. Fausto is among our favorites of the Tatuaje lineup. We think it’ll be among yours, too. Just make sure you hit up the all-you-can-eat buffet first.

Consult any smoker for his or her list of strong cigars that kicked their ass, and you’ll see La Flor Dominicana on it in short order. Again, you have milder expectations of Dominican tobacco, as it features a dark natural Ecuadorian wrapper – until you find out it’s a Ligero blitzkrieg underneath, and powerful stuff at that. The truth: LFD ravages the countryside, feasting on the big talkers and leaving the weak and timid in its wake. Masochists. All of you.

The Tabernacle by Foundation Cigars

Nick Melillo is no stranger to full-bodied cigars. He helped make Drew Estate’s Liga Privada No. 9 and T52. It’s even been said that the Dirty Rat was once his personal blend. With his latest digs at Foundation Cigar Company, he’s back at it again, sporting a litany of boutique cigars with rave reviews. Among them – The Tabernacle. A tour de force of Nicaragua and Honduras’ most heavy-hitting tobaccos. Flavors of dark chocolate, earth, raisin, coffee, and black pepper are frequent flyers on this rocket. It could probably even send you to orbit.

The wisdom with strong cigars is, as we’ve noted, don’t smoke ‘em on an empty stomach – and with CAO Brazilia, about two or three pizzas should do the job. Full, full Nicaraguan power just drips out of this smoke, and with its similarly rich Brazilian Maduro wrapper, has hobbled even the most iron-sided smokers among us. But it does this all while being one of the most popular cigars of all time.

Next on this who’s who of palpitations is Jose Garcia…though you know him as “Don Pepin.” How synonymous is his name with power and flavor? Well, if we were to play word association, I would say “spice” – and you would immediately say, “Pepin.” His all-Nicaraguan Blue Label starts strong, and haymakers your taste buds from there. “Hearty” doesn’t even begin to cover it: it is rumored that demolition teams use this in lieu of dynamite, and not just because they’re smaller…just more efficient.

Oliva sneaks back onto the list with an under-the-radar smoke: Inferno. It’s not normally thought of as a strong cigar, and that’s the catch…you don’t see it coming until it’s too late. Its Habano wrapper is crammed with layer upon layer of dark Ligero, running the throttle wide open for a full-tilt, full time smoke – just how we like it. Even in big-ring sizes like this 60-gauge we’re showing ya. If you weren’t sitting down when you started smoking it, you will be by the time you finish.

Man o’ war – Ruination. You may be sitting, but you may want to lay down.

Rocky Patel 15th Anniversary. Stop at the band or you will regret it.

Just about anything named Diesel.

Just about anything named Diesel.

I Love the CAO Brazilia one of my go to sticks

Lets not forget the 601 Green Oscuro

Don’t forget the Oliva series V I don’t agree with the Camacho triple Madura its full flavored but I wouldn’t call it strong.

The CAO Brazilia I thought was med. At most. Not that strong but does have a nice flavour to it.

sounds like a nice sampler should be made with these beauties.

I smoked the biggest size of the Cao Brazilia that I bought from Smoker Friendly, and I’ll tell you, they weren’t kidding when they said this cigar is super powerful.

To me, the Camacho Triple Maduro is light. I smoke the La Gloria Cubana Black in the 64 ring, every day, and I’m not phased. Anyone have any thing stronger to suggest?

the Camacho Triple Maduro to me is medium at the most but I am picky.

Looking for a strong smoke? Try a NAS!

Absolutely love the descriptions. haha. Well done. Can’t wait to try a bunch of these! One that has kicked my ass recently is the Rocky Patel Super Ligero Sixty. What a beauty, I couldn’t believe it rocked me so bad that I had to smoke another a week later to be sure. Yep, did it again. Thanks!!

[…] Don stated this was a “one and done” Rob Roy! Otherwise find a La Bomba Warhead II stogie. Cigar Advisor calls it a smoke that “pummels you like an undercover drug narc at a Hells Angels rally”. […]

Srength and body are two different characteristics.I would consider the CAO Bazillia and the Fausto more along the lines of full bodied rather than full stregnth. The Roma Neanderthal is one of the stronger cigars that I have smoked,

If this is the Cigar Adviser 2022 report, how come the responses are 5 and 6 years ago?

[…] base flavors, but it’s noticeable if you pay attention. The strength is still trucking along at full-bodied too. I’m finding the blend to be moderately complex with some bursts of sweet and spicy flavors […]

Buying Cigars Overseas: The US vs UK Experience