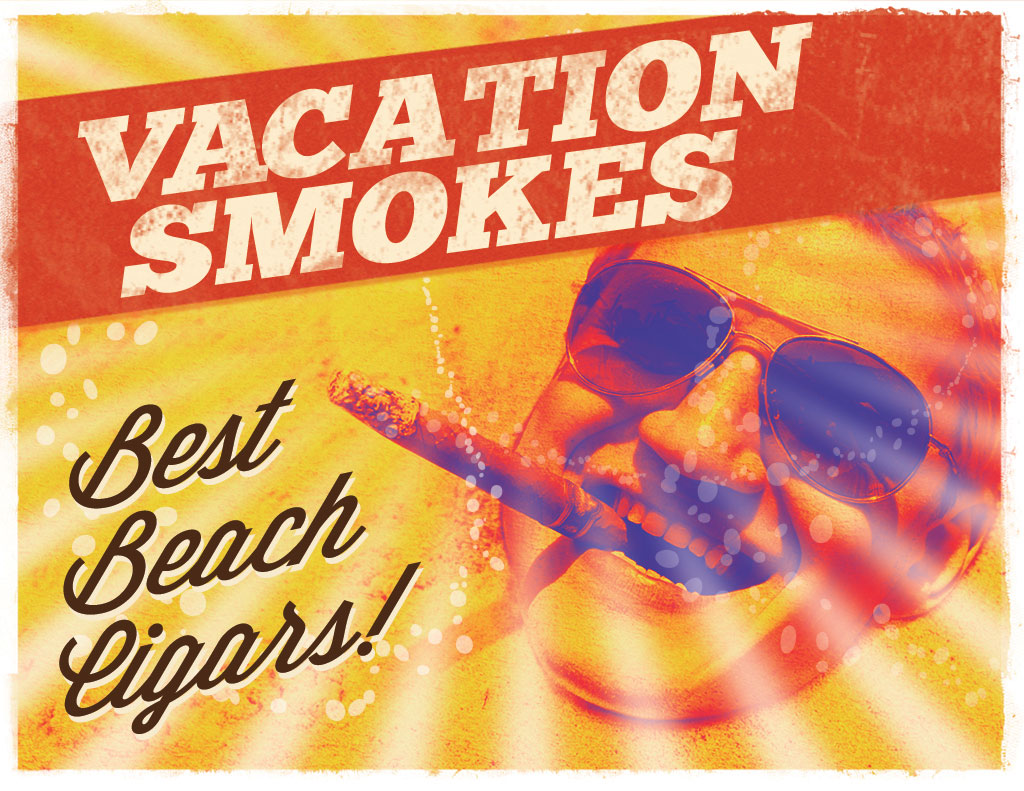 Being born and raised in Central New Jersey, I spent practically one third of my life “down the shore.” Good ‘ol Exit 63 on the Garden State Parkway takes you to Long Beach Island, which was my second home during the summers months from infancy through my college days. In fact, I can’t imagine living anywhere that isn’t a reasonable drive from the ocean. My mother was a middle school librarian who would rent a house in Beach Haven during her annual summer hiatus, and some of my best childhood memories hark back to those halcyon days of bodysurfing, dock fishing, mini-golf, and the din of the pinball machines at Hartman’s Arcade.

Today, my Dad lives at the Jersey Shore, about 60 clicks north of LBI in a beachfront high-rise. These days, when I visit him on summer weekends, I partake of more adult pastimes and I always bring a stash of good “beach cigars”: cigars to enjoy on the beach. My aunt and uncle, who live nearby, often join us, and we still sit on the beach (traditionally, near the water), in a semi-circle as we did back on LBI gabbing it up about anything and everything; my Dad, always with his trusty The New York Times, and being the old school, dyed-in-the-wool Democrat he is, eventually getting into a heated argument with his right-wing Conservative brother over politics as I sit back in my canvas chair, half-listening, while enjoying my trusty cigar.

Whether it’s looking at a lone sailboat in the distance bobbing its way across the vast ocean horizon, or the waves as they curl and crash in their hypnotizing rhythm, or the screech of the seagulls scanning the shoreline for bait scraps, there’s something about smoking a couple of good beach cigars that conjures a mix of both contentment and liberation.

Since I’ve been practicing this routine for a number of years, I’ve discovered that not just any cigar is ideal for smoking on the beach. There are several things that factor into choosing the right beach cigar; mainly, the weather conditions, which include sun, wind, humidity, or depending on the day, all of the above.

I’ve found that cigars with maduro and sun grown wrappers tend to do better than lighter wrappers because they’re thicker, oilier, and generally more resilient.  You don’t want to necessarily smoke a cigar that’s very pricey, yet you want something that’s well made with a lot of flavor.

What follows are seven cigars that fare well under these conditions, and why; that’s assuming you can partake on either your own private beach or one on which smoking is still permitted these days.

A hearty, full-flavored cigar with some considerable complexity make the Camacho Ecuador Robusto a good medium-full choice while reading a page-turning crime novel. The dark, oily Ecuadorian Habano wrapper is thick enough to handle the ocean breeze, and the Brazilian Mata Fina binder also helps keep this cigar burning evenly. What I like about the Ecuador line in particular is that it’s a happy medium between the mild Camacho Connecticut, medium-bodied Camacho Corojo, and the full-bodied Camacho Triple Maduro. In other words, it offers the best of all Camacho worlds; some sweetness, some spice, and lots of earthy elements with a note of pepper. Additionally, because this Robusto comes in a tubo, you can toss a couple of these beach cigars in your bag without the worry of getting sand in them.

I’ve enjoyed this cigar on many occasions, especially as a “first cigar of the day.” The Nicaraguan-Honduran core is nutty, earthy and woody, while the thicker Connecticut Broadleaf binder keeps the burn steady, and the Ecuadorian Sun Grown wrapper adds an extra note of sweetness to this well-balanced cigar that’s great for enjoying while you cool-off after that morning run along the shoreline.

When you smoke a cigar on the beach, it’s hard to avoid the people around you. I’ve had many a sour puss stare in my direction on those days when the wind was wafting my cigar smoke towards an unassuming sunbather. So, if you want a really savory smoke that will be a little more pleasant to your nosey neighbors, the coffee-infused aroma from JAVA Toro Maduro, with its dense and inherently sweet Brazilian Mata Fina wrapper, should do the trick. The smoke is smooth, creamy and smells more like coffee than it tastes, so you get plenty of rich, medium-bodied Nicaraguan tobacco flavor with plenty of head-turning fragrance.

Not every beach cigar has to be savored under the sun. The Nica Rustica El Brujito is an ideal choice for that evening bonfire on the beach. This cigar is named for “El Brujito” (“The Witch Doctor”), a pre-Columbian icon and a symbol of pride for the people of Estelí, Nicaragua. The smoke offers a well-balanced mix of sweetness, earth, spice and wood, via a blend of Nicaraguan longfillers plus a Mexican San Andrés binder, all finished in a dark Connecticut Broadleaf wrapper with a classic Cuban pigtail cap. Pair it with a long-aged Nicaraguan rum; then stare into the fire long enough and you may just see “El Brujito” appear in the embers.

Since a relaxing day on the beach wouldn’t be complete without a cold beer, this Churchill from the Perdomo Craft Series Amber line makes a mighty fine combination. The Nicaraguan sun grown wrapper is not only gorgeous and hardy enough to withstand the elements, but the cigar’s extra-long dimensions offer an afternoon’s worth of well-balanced, medium-bodied flavor with your favorite brew or two. . . or three.

Staying within that medium-body range, the Rocky Patel Rosado Torpedo also makes for a big, satisfying beach smoke. The 52 ring covers plenty of area, so the wind will be less of a factor, and the Ecuadorian Sumatra wrapper takes on an oily, mouthwatering patina as it glistens in the sun. The Nicaraguan-Dominican core offers notes of earth, nuts, and cedar for a relaxing, aromatic constitutional to enjoy while listening to your favorite beach tunes.

The VUDU Dark No.9 is the perfect complement at dusk when the horizon over the ocean takes on that pastel-like, orangey-purple color. Made by Jesus Fuego, he uses an oily, sun grown Pennsylvania wrapper that balances perfectly with the Nicaraguan long-filler core. The Churchill-size dimensions provide enough time to watch the sun set and the moon rise in this full-flavored smoke brimming with earthy-spicy flavors that furnish a rewarding end to a long summer’s day.

Now it’s your turn. Tell us which beach cigars you enjoy most, by leaving a comment.

The Nica Rustica is an excellent cigar!

The free ones are usually very good. But yes Paul Esch the Nica is an excellent beach sunset cigar.

Per La Del Mar… The pearl of the sea

I would never bring a great cigar out on the beach. The wind at the beach is usually a bad environment for trying to enjoy an expensive cigar as it causes the cigar to burn down way too quickly and often uneven. I like a good inexpensive smoke out on the beach because it will usually take a couple of them to satisfy me …….. jmho

Being from Canada the wife and I have visted Cuba quite a few times. Laying on the beach with a good cigar and some nice rum, has got to be just about the best way to spend an afternoon

It’zzz funny, I live 5min from the beach with Sugar Sand and turquoise water “Navarre Fl” on the Gulf of Mexico, the salt In the air will make any cigar taste like asssss!!!!

My son and I each smoked a Jehrico Hill lancero on the pier in Corpus Christi last week while catching sharks.
Wonderful smoke, good time overall. It won’t be my last.

Great article Gary. I have learned something new. Now I can pick out the perfect cigar for a day at the beacg

Hi Hunter – Thanks for the comment. You picked a winner. Hope you get to enjoy one of those awesome Perdomos on the beach this summer.
G-~