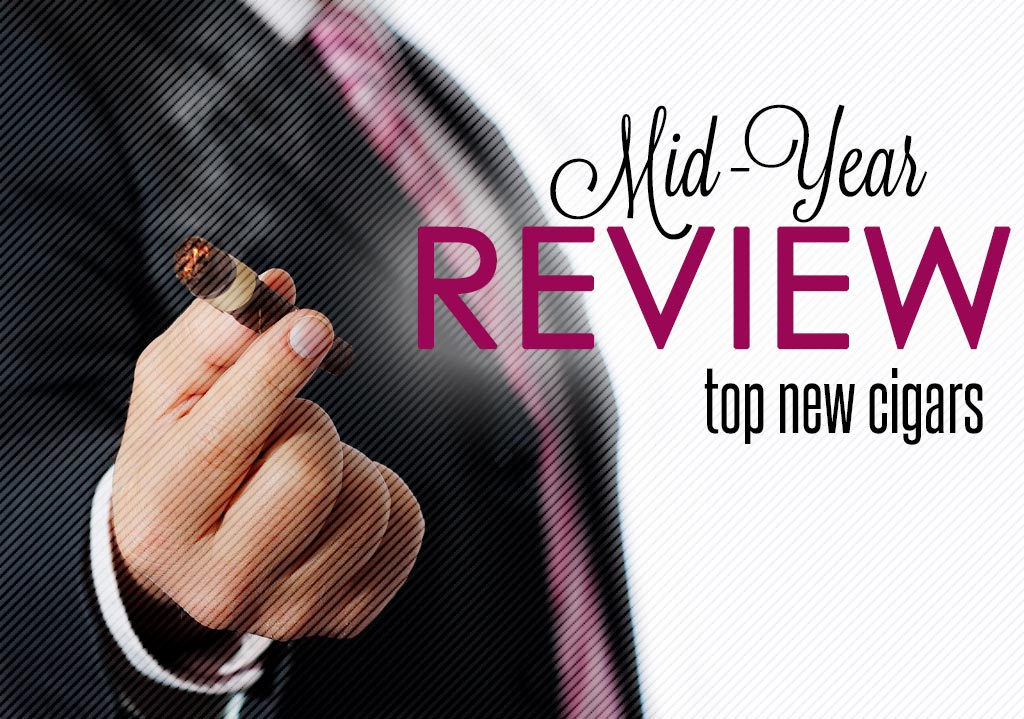 The Cigar Advisor Mid-Year Review: The Best of 2016’s New Cigars – So Far…

Though 2016 has only seen around a half dozen months thus far, a lot has happened in the cigar industry in the first half of the year – the biggest news being the dooming regulations on the industry as a whole by the FDA. These FDA regulations essentially can make some of your favorite modern brands a thing of the past by either imposing unsurmountable fees to remain in business, or by simply banning lines altogether. But seeing as everyone and their mama has been covering this issue, I’m going to focus on the happy; and by happy, I mean the top new cigars that have been released thus far in 2016.

Keep in mind that this list won’t encompass every new cigar that has come out, and does not include the new cigars that are due to be released at this year’s IPCPR – since we will undoubtedly cover the most mentionable news after that event has concluded in late July/early August.

I have sung the praises of Quesada from the mountaintops like a yodeler since I discovered the brand 3 years ago, and after trying this new offering, will continue to do so. This line started last year with the release of the Quesada Reserva Privada at Procigar Festival which had a legendary reception among cigar smokers. To follow up such rousing success, Manuel and company decided to take this tasty creation, and simply add a Connecticut Broadleaf wrapper atop the same internal blend of tobaccos, and voila! With a Dominican Criollo binder from 1997 and a wealth of ligero longfiller tobaccos, the Quesada Reserva Privada Oscuro is rich, strong, and flavorful from start to finish. Remarkable doesn’t even begin to describe this new offering by, in my humble opinion, one of the best manufacturers today.

I love Oliva, and if you’re a serious cigar smoker, you probably do too. That’s why you need to check out this under-the-radar stogie Oliva added to their portfolio about a month or so ago. With oily Nicaraguan longfillers to start off the blend and a hand-selected Ecuadorian Habano wrapper to finish it off, this perfectly rolled cigar will grace your palate with notes of coffee, oak, and some spice to send this full-bodied offering to a whole new level. Not much press surrounded this delicious treat, but once you get your hands on one, your taste buds will consider this cigar front page news.

Since Camacho’s rebranding campaign starting in 2013, we’ve seen the release of the heavy-hitting Blackout in 2013 and the should-be-number-one-cigar-of-the-year-but-that’s-none-of-our-business American Barrel Aged in 2014. With so much success two years in a row, it can be hard to pull off a three-peat and knock yet another pair of your socks off. But you might want to run out to JCPenney and pick yourself up a new pack of Gold Toe’s Canterbury Fashion socks. Released just a few days ago, the Powerband uses a Dominican, Nicaraguan, and Honduran long filler core which includes some ligero from each nation, a San Andres binder from Mexico, and a decadent Habano 2000 wrapper. It is as bold as jumping a tank of sharks on a tricycle, richer than a Saudi Prince, and more complex than Stephen Hawking’s doodle pad, and it just keeps revving up these qualities the further down the cigar you go.

Padron cigars are like the Rolls Royce of the industry. They only make the best-of-the-best high quality cigars, and last year they released yet another prizewinner with the introduction of the Padron Damaso. This year they’ve continued to build upon the success of the Damaso with the introduction of two new sizes, the No. 32 and the No. 34, but I’m going to talk about the No. 32 here. Aside from the Nicaraguan long fillers that grace this stellar offering, for quite possibly the first time in their history, all Padron Damaso cigars utilize a Connecticut seed wrapper, while at the same time abandon the traditional box-pressed shape and non-cellophane packaging Padron is known for. The result is a cigar unlike anything we’ve ever seen by this superb manufacturer, and a flavor that is both smooth and relaxing, with notes of cedar, earthiness, and more for a very well rounded smoke. If you like more mild to medium cigars, this is a true winner.

Another cigar that was introduced just this spring, the Tatuaje K222 is a stellar new cigar that only adds to Tatuaje’s reputation of making wildly complex offerings. Though you may have a hard time finding these gems as they are limited to only 100 boxes of 25 per month, if you do see this on the shelf it is well worth the purchase if you’re looking for a deep rich full-bodied smoke. With a Nicaraguan filler and binder and dark Ecuadorian Habano wrapper, this new creation named after Pete Johnson’s late dog, Kona, who passed away at 2:22 P.M. will greet you with a warm blend of woodsy flavors as well as chocolate, some decent spice, and earthy/leather notes. Because of its limited production, your best bet to snag some of these would be at a brick and mortar cigar store near you.

La Aurora, much like Quesada, is what I believe to be one of the more underrated cigar makers on the market today. But for those of you who know and love this brand, here’s yet another stellar, and wildly affordable, smoke to stock your humidor with. It all starts with placing the Dominican and Nicaraguan long fillers and well-fermented Corojo wrappers in a Dominican rum barrel for no less than four years before being rolled for a complex blend of toasted woody flavors with some coffee and earthiness in between. It’s a pure relaxation cigar that is delicate yet somewhat pronounced with a medium to full-bodied profile. Pair it with coffee or your favorite rum (duh) for a pairing that is out of this world.

[Editor’s Note: This product is no longer available]

The Griffin’s as a brand has made a big impact on the cigar market over in Europe, especially in nations like Portugal and Spain, so it comes as no surprise that The Griffin’s Nicaragua was released early in those markets in 2015. However, because of its bold flavors and medium- to full-bodied profile, this cigar was made to appeal more to the American palate, and boy is it ever receiving some well-deserved attention over here since its U.S. release in February! Using core tobaccos from the Dominican Republic, Nicaragua, and Honduras and a Nicaraguan Habano wrapper, this cigar puts out a plethora of rich flavors such as earth, spice, and wood, while still maintaining a smooth relaxing sensation. It seems as if Davidoff has been spicing things up across the board lately, and the more affordable The Griffin’s Nicaragua is no exception.

75 years in business is a massive milestone for any business, so when Famous Smoke Shop celebrated this milestone this past year as one of the only family owned cigar retailers in the world, Romeo y Julieta made it a point to help honor that achievement with the Capulet 75th Anniversary. Though the Capulet and its brother cigar the Montague were released last year, the 75th Anniversary was released at the beginning of 2016. Featuring a smooth blend of Honduran and Nicaraguan core tobaccos adorned in a gorgeous Ecuadorian Connecticut wrapper, this hour and a half long smoke features hints of spicy sweetness as well as a smooth creaminess that delights the palate the entire way through. It’s a must smoke for any Romeo fan or anyone looking to experience a fully loaded cigar without a fully loaded strength profile.

While there were other releases thus far this year in the cigar world, limited space has tied my hands a bit in terms of what I could add to this list. Cigars like the Davidoff Chef, CAO Margaritaville, Arturo Fuente Especiales, Chillin’ Moose Too, and more have hit the shelves recently, all of which are worth checking out depending on what kind of smokes you enjoy. And while the cigar industry has been busy this half of the year, there is still a lot more to come after IPCPR.

As a side note, and I know I said I would focus on the happy in this article instead of the FDA, it should be noted that all of these offerings may ultimately have a rather short shelf life due to pending regulations. I highly advise getting your hands on any new cigar that comes out, because once the regulations fall into place it may mark the end to all of these new lines and any new lines coming out of IPCPR for good. But before that happens, enjoy all the new cigars you can and stay smoky.

Appreciate the notes. Some good leads.

Read More
Cigar Ratings & Reviews
#5 on the list of Top 25 Cigars of 2017 is the Alec Bradley Tempus Centuria. Learn everything you need to know about this full bodied Honduran blend, in under 2 minutes: blend info, customer reviews, our tasting notes & more!
Read More