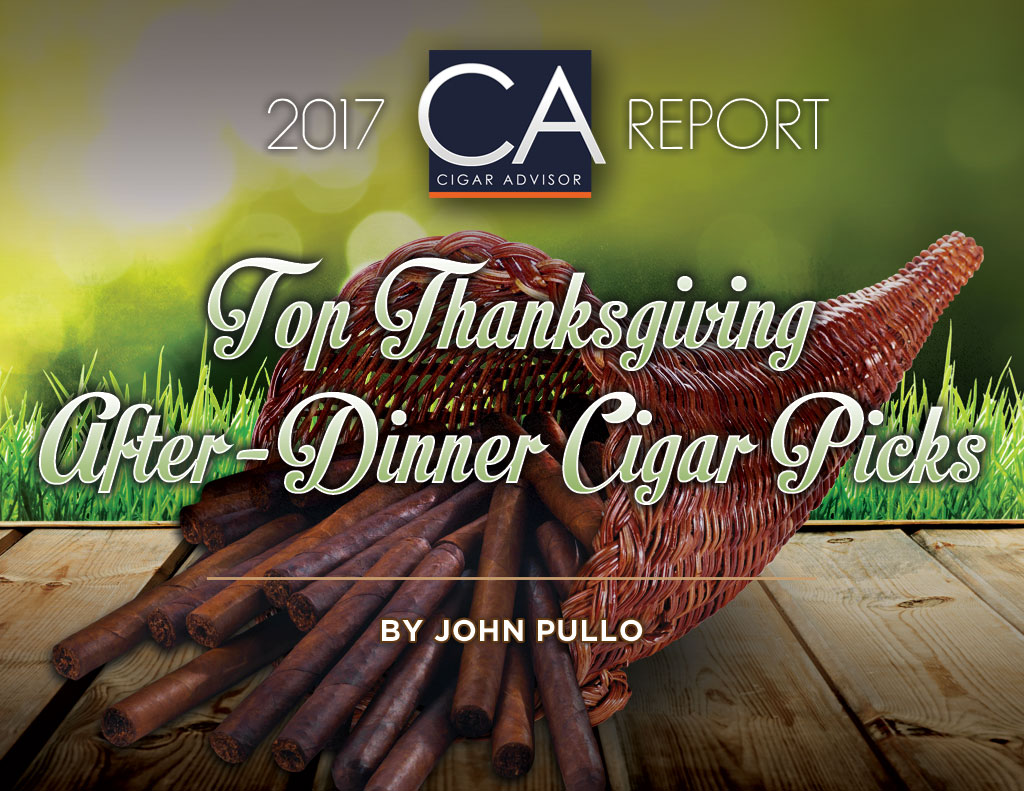 No Thanksgiving dinner is complete without an after-dinner cigar…but what tasty morsel is fit to fill the gap between the dessert course and the turkey coma?

To help decide, let’s look at the scene at my in-law’s house: it’s a holiday-fueled feeding frenzy. The pack eats with such gusto that onlookers might think we all just got paroled, and this was the first real meal we had “on the outside.” As gravy and tryptophan slowly begin to permeate the bloodstream, we look back over the debris of the turkey and its trimmings, noting its resemblance to the aftermath of a Category 4 hurricane.

Only in America. Who wants dessert?

It’s an important decision. This is the special, perfectly-timed smoke that allows you to reflect on such a lavish meal, and keeps you calm enough to deal with your crazy, conspiracy theory-spouting uncle. Or your weird cousin who insists on speaking with an English accent even though he’s from Binghamton. I also happen to believe that an after-dinner cigar is a great treatment for settling the stomach after this big holiday binge.

Good after-dinner cigars are often hearty, but definitely complex. Strong is ok, but that’s your call – they just don’t need to be as tough as a $3 steak to enjoy (save those to share with your sister’s reprobate boyfriend).

A lot of what we’re looking at today are full bodied cigars…you know, the ones that people always tell you, “You better lay down a good meal before you smoke it.” Good thing we’re laying down the mother of all feasts; that leaves even the heartiest of cigars on the table, and with all of these foods, the complexity makes a good match with the multitude of flavors in a Turkey Day meal. So let’s look at ten cigars – and some skillful blending – for which we should be very thankful.

On my first pass with the Vintage 2006, I knew this cigar would stand up after this yearly feast: the Nicaraguan-and-Broadleaf core is wrapped in a flavorful, 11-year-old San Andreas wrapper leaf, spouting thick and lush flavors of earth, wood and spice…and power. Sweet, too – making a great bridge to coffee and pie.

This is AJ’s second take on Hoyo – and so filling, you’ll need to loosen your belt an extra notch to make room for this after-dinner cigar. On the inside, it’s a mix of Cuban-seed Nicaraguan long filler and a Habano binder; outside, it’s a savory Ecuadorian Habano wrapper that does the work of hitting every last taste bud. Spicy enough that you’ll feel it in your giblets, too.

If this cigar had a tagline, it would end with “…only makes you stronger.” Powerful Esteli Ligero and other Nicaraguan long fillers and an equally intense Pennsylvania Broadleaf maduro wrapper contribute to the satisfying character of this epic box-pressed smoke. Jacob’s Ladder is probably the most heavy-duty after-dinner cigar I’ve smoked in a long time; the lush and lavish flavors are so in your face, that it’s almost hard to justify smoking it on something other than a special occasion. But you’ll find a way.

There goes Alec Bradley, making good into great. Black Market Esteli cigars are an almost-puro: we now have a double binder in place, where one leaf is from Nicaragua, and one is from Honduras. Nicaraguan long fillers and wrapper round out the recipe, which now smokes unabashedly full flavored – leaning in with big leather and pepper notes. If you liked the original Black Market, wait ‘til you see how the Esteli smokes.

There are so many flavors mixing on your plate at Thanksgiving – so why not reward your taste buds with a similarly complex joyride? Try CroMagnon as your after-dinner cigar: not the strongest of the bunch (remember, this is not a contest), but the seriously deep, rich and earthy flavors tip the scales of cigar enjoyment in CroMagnon’s favor. Here, an all-Nicaraguan core is treated to a Cameroon binder and an oily US Connecticut Broadleaf wrapper. Super-complex, sweet aroma, loooong finish. Very rewarding.

Much like you keep your “special” bottles in a liquor cabinet, and your “good” cigars in a separate humidor – there is Bin #1. It’s that spot in the factory where Rafael Nodal hit paydirt, finding the 15 year-aged Cuban-seed Dominican tobaccos for this special cigar. Try the Bin #1 D Major if you really want an over-the-top experience: the tobaccos are box-pressed and clad in an Ecuador Habano wrapper, making this, quite possibly, the most decadent cigar on the list.

A luxury-class smoke inspired by Sir Winston’s tendency to work late into the evening, with cigar and drink in hand – much like the traditional Thanksgiving dinner often stretches into the after-hours. The Late Hour is uber-complex – as nothing but the finest tobaccos from the DR, Nicaragua, Mexico and Ecuador are here. Medium-full, creamy-smooth and so good, I’d pay honest money for Morgan Freeman to narrate while I smoke it.

A very traditional smoke, as this Kristoff relies almost exclusively on Cuban-seed tobaccos. The blend, from the inside out: aged Dominican and Nicaraguan long fillers, a Dominican binder and a Honduran Criollo wrapper that smokes distinctively smooth and creamy. It’s a hardworking boutique whose medium-full smoke brims with impressions of caramel, cedar, spice and roasted nuts – and as an after-dinner cigar, enjoyable enough to relieve the self-loathing of having gone back for thirds at dinner.

Where the Dominican LGC is an enjoyable anyday smoke, it’s the La Gloria Cubana Serie R Black’s all-Nicaraguan ingredients that really grab your attention. The tobaccos are among the finest materials in the factory; the cigars are rolled to only big ring sizes, and the Ligero wrapper heaps on even more depth and taste, along with a sweet n’ woody aroma. A compelling, full-bodied burn that hits notes of earth, cedar and cream, along with dashes of pepper and spice – and just may be the perfect finishing touch to your 8-course feast.

Perched high up on the top shelf is one more great after-dinner pick, the Ashton VSG. Actually made by Fuente…so, you know, quality and such. But that blend: a mix of six (6) well-aged, Cuban-seed Dominican long fillers, plus a potent Ligero leaf hidden in the middle – it influences the whole cigar by adding a few more layers of complexity. Strength, too – as the larger sizes, like the VSG Spellbound, are as pleasurable as they are robust.

So here’s to a Happy Thanksgiving to all of our Cigar Advisor readers – and to hoping you get to finish your feast with a great after-dinner cigar. Got other suggestions? Leave a comment below!

Where is the ROMEO JULIETA “TORO”?

nothing beats a MY Father flor de las antillas before and after a great meal. Soooooooo smooth!

The Black Market Esteli is delicious. Nice list, JP, you should do this for a living.

The Aging Room and VSG are my favorites, but overall, great choices.

The black market and Cromagnun are great. I also like having an amazon basin after a meal.