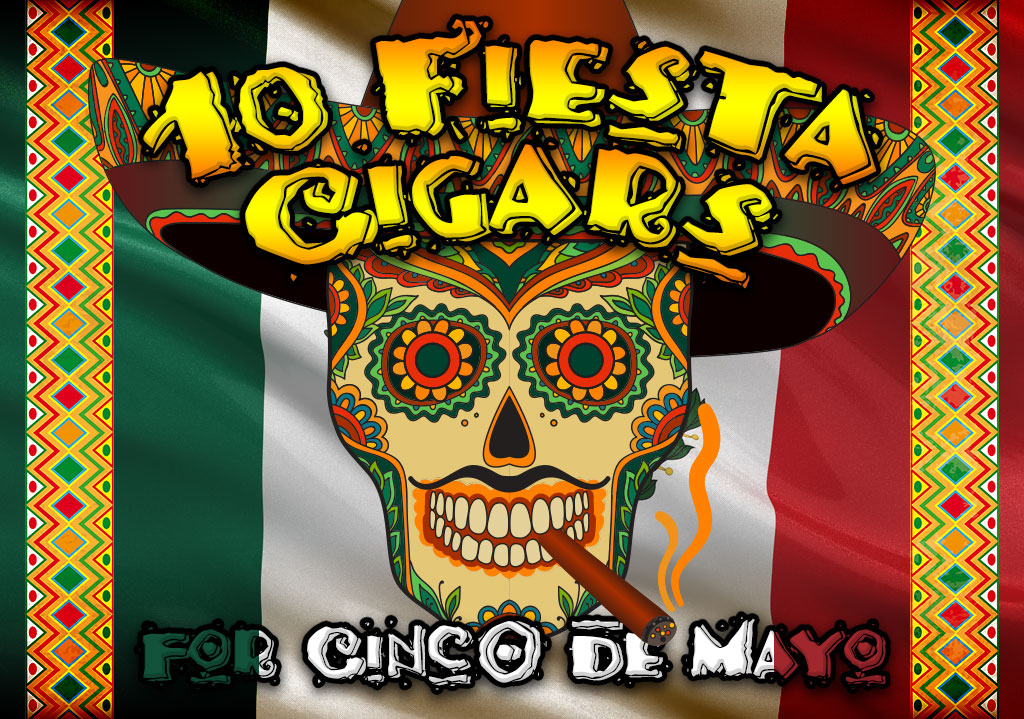 Cinco de Mayo: it is, perhaps, the most misunderstood holiday. And while the margaritas flow, I’ve drilled down the best Mexican cigars for you to smoke this year – along with titillating information about the true origins of this Mexican-American fiesta.

While Cinco de Mayo is one of the most celebrated holidays in the U.S, many still confuse it with Mexico’s Independence Day, which is untrue. Through the 1850’s Mexico raked up a large amount of debt to France, Britain, and Spain. With the economy in ruins, Mexico’s newly elected President was forced to default on its debts – prompting the European powers to dispatch Naval forces to Veracruz. Though Britain and Spain were able to resolve their issues, France’s Napoleon III seized the opportunity to grab a piece of Mexican territory.

With 6,000 troops, the French sought to conquer the small, but geographically strategic, town of Puebla. On May 5th, 1861 the French were met by a small but loyal army of 2,000 Mexicans who fought ferociously from dawn to daybreak and forced the French to retreat. By night the Mexicans inflicted over 500 casualties on the French while suffering less than 100 themselves. The battle served as a symbolic victory of brave Mexicans facing down European imperialism and winning. Eventually, with U.S aide, the Mexican resistance forced the French out, leading to the Mexican-American holiday.

Mexican Tobacco: Why it’s so Smokable

Mexican tobacco pre-dates history as indigenous strains were often used in spiritual pilgrimages among the native tribes. However, the tobacco you see in modern cigars comes almost exclusively from the Turrent family, the oldest tobacco growing family in Mexico with over five generations of experience.

In 1880 Alberto Turrent settled in Veracruz (yes, the very same Veracruz where the Europeans landed) in the lush San Andres Valley. With tobacco seeds in hand, Alberto reckoned the valley was perfect for tobacco: it sits perfectly in line with Cuba and the Dominican Republic, it’s blessed with rich volcanic soils, enjoys winds from the Gulf Coast and is a perfect climate for producing premium cigar tobaccos.

The famed valley has been the host to a bevy of successful plantations, many of which are still in operation, including Matacapan, Sihuapan, Calería, Caravaca, Santa Clara and many others. Commonly used as wrapper, San Andres Morron (aka San Andres Maduro and San Andres Negro), is harvested in a similar manner to Connecticut Broadleaf. The tobacco itself is naturally sweet and commonly imparts earthy, lightly spicy and woody notes to a cigar.

The quintessential Mexican cigar, and a must-smoke for any Mexican tobacco enthusiasts. Te Amo is Spanish for “I love you”, and is the very brand by which the Turrent family built a large US following for their smooth flavors and affordable cost. The brand dipped in popularity when Mexico phased in steep import taxes and tariffs on tobacco – but now that this is no longer the case, you can enjoy this expertly-made cigar any day of the week. Smooth, sweet, and just as affordable – Salud!

While Te Amo was the Turrent family’s first brand, the Casa Turrent line is pure family heritage. A luxurious blend of Nicaraguan and Mexican fillers are enveloped in a silky black San Andres wrapper. This cigar bursts at the seams with hearty and sweet notes of coffee, cedar, nuts, and spice.

One of the latest editions to the Romeo y Julieta lineup, this cigar is all about the ultra-premium life. The swarthy San Andres Negro wrapper conceals a full-bodied blend of Nicaraguan and Dominican fillers grown at Tabacalera A.J. Fernandez. Smooth, creamy and whole-heartedly delicious – Romeo San Andres is a hit.

A proverbial piñata of Maduro, this Camacho is a full-bodied, tequila-loving, ass-kicker of a cigar. Chocked full of Brazilian, Honduran, and Dominican maduro leaves, an original Corojo maduro binder and, of course, the coveted San Andres maduro wrapper. Loaded with black pepper, chocolate, woods and coffee, Camacho Triple Maduro will elevate your Cinco de Mayo by more than a few notches.

If a night of knuckle-dragging and coronas is more your style, then RoMa Craft’s Neanderthal is the way to go. This boutique showcases the blending versatility of the San Andres wrapper by pairing it with uber heavy Pennsylvania double ligero leaves. While it’s robust in strength, Neanderthal will leave you with a smooth cigar that’s both creamy and satisfying.

Rocky Patel’s Vintage 2006 is one of the finest examples of a San Andres wrapper. While the spelling is a tad different, the 11-year aged San Andres wrapper sits in harmony with a Connecticut Broadleaf binder and Nicaraguan fillers. Deeply complex, it’s no wonder we named this ultra-premium in our Top Releases of 2017.

Founder of Crowned Heads Jon Huber once described Jericho Hill as “the poor man’s Padron”, and that’s darn close to what it is. Made at My Father Cigars Nicaraguan factory, this luxury cigar is a down-right treat and a personal favorite of mine. The San Andres wrapper is charcoal-black and looks like a candy bar in a handsome box-press.

The Carrillo family, much like the Turrent family, is steeped in their family’s history in cigars – which is why each cigar in this line is dedicated to a family member. La Historia is a top-rated mingling of Mexican, Nicaraguan, Dominican and Ecuadorian tobaccos. Customers and critics alike rave about the La Historia, with the E-III receiving a 95 rating from Cigar Aficionado.

There’s not much that needs to be said for this all-star cigar. Alec Bradley’s Tempus gets a gold star in every category from blend to price in a full-bodied blend of a rich Mexican San Andrés Maduro wrapper with a perfectly-balanced blend of Nicaraguan & Honduran Criollo ’98 & Corojo ’99 Ligero and Viso tobaccos. Try this one with some dark rum and buddy, you’re good to go.

Drum roll please! Debuting May 2018, CAO steps into the realm of Cinco de Mayo classics with the release of the Limited Edition Zocalo. Launched exclusively in a chunky 60 ring gauge, this Mexican themed cigar flexes the versatility of the San Andres tobacco with the addition of a Cameroon binder over hearty Nicaraguan tobaccos: expect  rich notes of graham crackers, pepper, and char, along with a subtle sweetness. Only 3500 boxes are being produced – so be sure to grab these fast!

Time now to celebrate: take your new-found knowledge of Cinco de Mayo and Mexican tobacco to the streets this year and post your Cinco cigar picks in the comments below!

Black Cházaro is a great Mexican cigar and 100% puro.