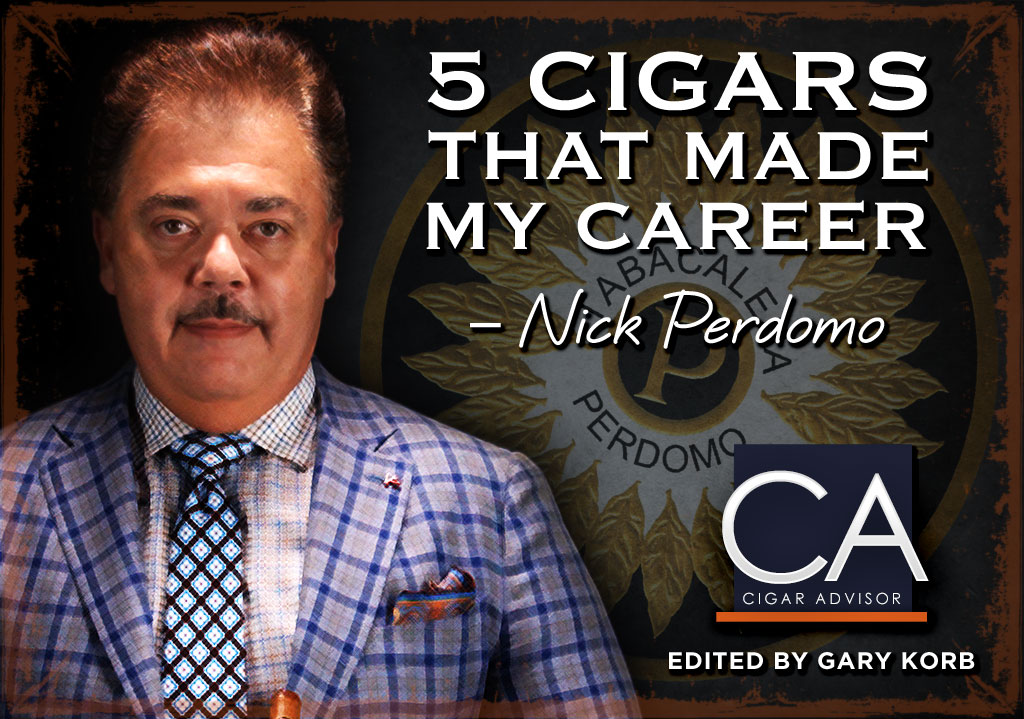 5 Cigars That Made My Career: Nick Perdomo

5 Cigars That Made My Career: Nick Perdomo

One of the cigar industry’s most candid personalities talks about the cigars that took his company from a home garage rolling room to one of the world’s biggest premium hand rolled cigar factories.

By Nick Perdomo
(Introduction and additional text by Gary Korb)

Sometimes, the calling to follow in your father’s footsteps presents itself later for some people. For Nick Perdomo Jr., his father, Nicholas Perdomo Sr., and his grandfather, Silvio, were both master cigar rollers at Cuba’s famed Partagas cigar factory until the Revolution of 1959 turned their lives into a world of hurt. Barely escaping the tyranny of the Castro regime within a breath of his life, Nicholas Sr. made it safely to the U.S. to start over and raise a family with little more than nada.

His son, Nicholas Perdomo Jr., grew up in Florida, and after serving in the U.S. Navy worked as an air traffic controller at Miami International Airport. Yet, somehow it just wasn’t enough. Call it providence, fate, or destiny, but in 1992, Nick Jr. finally got “the calling” to resurrect his family’s cigar making heritage. Starting in his Miami home garage, “Nick’s Cigar Company” was born. Holding down two jobs and raising a family of his own, it wasn’t easy, but his timing was perfect for the ’90s Cigar Boom.

“My Dad used to say, ‘I knew the streets weren’t paved with gold, but I thank God for coming to America,'” says Nick Perdomo Jr. “He always told me that the American Dream was possible; and here we are, more than 25 years later, one of the biggest producers of premium handmade cigars. We’re incredibly grateful to our customers, and I thank God every day for our success.”

For Nick and his team it’s always been about the customer. So, here in Nick’s own words, are the 5 cigars that took him from a virtual one man show, to one of the world’s premiere cigar manufacturers.

We’re incredibly grateful to our customers, and I thank God every day for our success. – Nick Perdomo Jr.

“Our first Perdomo Reserve cigars turned out to be a pleasant surprise. We were fortunate to receive all these high rating scores in the magazines, and that really catapulted the company through the roof.”

The original “La Tradición Perdomo Reserve” selection was a Nicaraguan core blend offered in African Cameroon, Ecuadorian Sun Grown, and Nicaraguan Maduro wrappers. The cigars weren’t named; rather, they were designated by letters or numbers like Reserve “R,” Reserve No.4, Reserve Maduro “A,” etc.

In May 2004, Cigar Insider gave the La Tradición Perdomo Reserve Cameroon “E” – a 6″ x 54 Double Corona – an “Outstanding” 91 score stating: “Slightly pressed with a wonderful cap, this cigar has balanced flavors of coffee bean, leather and caramel. It has a hint of black pepper. The finish is woody.”

Perdomo recently revived the La Tradicion Perdomo Reserve selection in Cameroon, Sun Grown and Maduro for both newcomers and veterans of the brand who want to taste these “vintage” blends, like the La Tradicion Reserve Cameroon Epicure – a renamed version of the original Cameroon “E” noted above.

“Another cigar that put us on the map because it was unique; you had a Connecticut Shade wrap with a Nicaraguan filler blend. That was kind of different at the time, and it was actually a pretty rich-tasting cigar, too. We’ve been making it for 18 years now, and it continues to grow for us.”

The Perdomo Champagne cigars selection was originally created to celebrate the Perdomo family’s 10th Anniversary in business. The smoke imparts complex notes of almond, coffee and cocoa that leave a smooth, silky finish on the palate.

“Another powerhouse cigar that had a huge impact on our business. It represented the way that I saw things in terms of what we had accomplished to-date, as well as where the future direction of the company was headed.”

“My father taught me that once tobacco is completely fermented, you can give it an additional fermentation and aging period by fermenting it in charred oak bourbon barrels . . . The natural charring acts as a filtering agent for the tobaccos, and because French oak is very porous, it allows the tobaccos to breathe during this extra fermentation period. It is that special attention to detail that separates the tastes of our tobaccos and what makes them so rich, complex and flavorful.”

Perdomo Barrel Aged Habano cigars use a full-bodied blend of Cuban-seed tobaccos grown in the Estelí, Condega, and Jalapa regions of Nicaragua and are offered in Nicaraguan Sun Grown and Habano Maduro, Ecuadorian Connecticut Shade and Original Nicaraguan Habano wrappers.

“A cigar that’s particularly special because it brings back great memories and good times. Named for my grandfather, Silvio, I still remember smoking that Double Corona with him and my Dad.  You know when somebody asks you, ‘What’s the best cigar in the world?’ Well, there are a lot of times when a cigar can be phenomenal, but the experience of who you’re smoking it with and that time spent together can make a big difference, which is why this one is especially close to my heart.”

Perdomo Edición de Silvio cigars are made only by Perdomo’s five most experienced rollers. The tobaccos used are from an outstanding Nicaraguan harvest that has had over 20 years of aging. They are fermented exclusively in Spanish cedar bins and 50-year-old vintage French oak casks to achieve an exquisitely smooth and flavorful smoke with perfect balance. Also available in Ecuadorian Connecticut and Nicaraguan Sun Grown wrappers, here’s that Edicion de Silvio Double Corona Nick referred to above.

This is a recurring Cigar Advisor series.

Nick – thank you for awesome cigars

Enjoyed 3 of the 5 & looking forward to trying the other 2. Been a Perdomo ‘smoker’ for about 15 years (almost 76 years old). Was introduced to Lot 23 at a cigar dinner & moved on to the Champagne Reserved(my favorite). I do smoke other brands however my humidor is 80% Perdomo’s.

I have a 10 anniversary champagne cigar every day with a nice glass of cabernet. Life is good.

All great cigars, but you have others as well. Dont forget the original Estates. The Monstro was one of the best ever. And the Rosado was once my favorite. Great job Nick. Keep putting out the hits👍

What about the Lot 23 natural? It’s my all time favorite cigar.

when only the best will do

Perdomo Habano was a MUCH better cigar before they started burbon barrell aging. The older Habano was my favorite cigar every evening. I do not like the Burbon Barrell aged; not as good a taste.

Ok so the Perdomo lot 23 is my all time favorite morning cigar. Paired with a great cup of coffee is simply doesn’t get any better.

Not only have I never had a bad Perdomo, but Nick sets the standard that the others can only hope to achieve. That is the difference between continuing a family tradition and honoring your family name.

the lot 23 is one of my breakfast smokes also. I did get a box one time that wasn’t quite aged right. after sitting in my humador for six months it finally got rid of that nasty ammonia taste. other than that one box of lot 23. I have never had a bad Perdomo

ESV 1991 is my all time favorite Perdono.

Thanks for all the comments so far. Interesting to read opinions on the barrel-aging, too. G-~

Always a great draw and an easy to remove band. 20th Anniversary Maduro my fav.

Hi Terry,
Can’t say, but I know Nick is always working on something. I’m waiting for him to release a new Perdomo2 selection. Those were really good.

Read More
Cigar Buying Guides
While many occasions call for a cigar, not every occasion calls for booze. See our top non-alcoholic cigar pairings to go with any mood, activity or event!
Read More