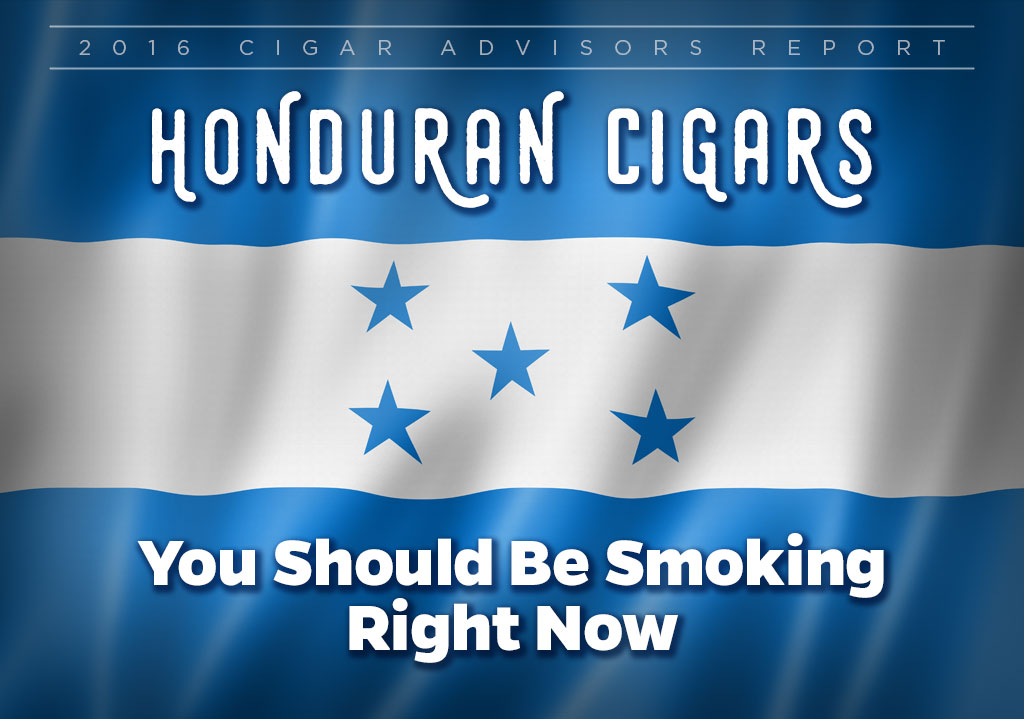 2016 CA Report: 5 Honduran Cigars You Should Be Smoking Now

5 Honduran Cigars You Should Be Smoking Now

It’s in my opinion that Honduran cigars are often underrated compared to their Nicaraguan and Dominican counterparts. I just don’t think they always get the same love as other cigar tobacco growing countries. Now, when I say Honduran, I’m referring to cigars that utilize Honduran tobacco in their blends as opposed to cigars that are produced there that use other tobaccos.

Honduran tobacco is sun grown for the most part, generally full-bodied, earthy and beefy in character with deep woody and nutty flavors. The areas of Danli and the Jamastran Valley are the hot spots for growing the tasty leaf as the soil is rich in nutrients that produce the supple and rich tobacco that make for delicious cigars.

So I came up with a little list of five cigars that I really enjoy that utilize Honduran leaf and should be on every cigar lovers list.

This is a flat out delicious smoke that’s complex with a whole lot going on. The Sanctum was rated number 15 on the top list of twenty five in 2015 and I would say for good reason. It’s medium to full-bodied with an interesting blend of Honduran, Nicaraguan and Colombian long filler, a Costa Rican binder and is covered in a gorgeous, supple, golden brown Honduran Corojo leaf. Some pepper hits the palate right off the bat and smooths out pretty quickly with a very woody character and a really pleasant natural sweetness of cinnamon and vanilla. This stick is immaculately rolled, producing thick white creamy smoke that lingers nicely on the palate. It’s just a great cigar and in my opinion very different than other Alec Bradley offerings in the past. Yum.

The mastermind behind CLE is Christian Eiroa, and when you think great Honduran smokes, he’s the man that comes to mind. These beauties are rolled in the Jamastran Valley at the renowned Tabacos Ranchos factory in Honduras, the same place he once made the Camacho brand. The cigar is medium to full-bodied in character and seriously packed with a tremendous amount of rich, toasty flavor. While the inner tobaccos are an all Honduran blend, the golden brown, luscious Corojo wrapper is what gives it the robust flavor that Christian’s cigars have always been known for. The profile is woody, earthy and a little peppery with a kind of citrusy sweetness that lingers on the back of your palate. Eiroa once told me in an interview that he blends his cigars based on the mood that he’s in at the time and I have to think that he was in one hell of a great mood when creating this wonderful smoke.

Okay, so it’s a cigar that almost everybody has tried, but it made the list because it is truly a staple of the cigar world. I think the secret to this cigar’s success is its amazing consistency, year after year. The Edge debuted ages ago, and has been a top seller for years. The blend is comprised of five-year aged tobacco consisting of bold Honduran and Nicaraguan ligero long filler, a Nicaraguan binder and that amazing, velvety smooth Honduran Cuban-seed Corojo leaf wrapper. The flavor profile gives off delicious notes of espresso, cedar, cocoa and caramel. This has been a go-to smoke of mine since it arrived on the scene and I love to pair it with a nice bold cup of coffee. Robust and flavorful – and if you haven’t had one in a while, I think it’s time to fire one up again.

In case you didn’t know, a puro is a cigar made up of tobaccos all originating from the same country and this Honduran born stick is as flavorful as they come. I’d say it’s medium to full bodied, leaning more to the full side, consisting of earthy filler tobaccos, a sun grown binder chosen from high priming leaves and wrapped in an extra-dark, sun grown Havana seed wrapper. It’s a smooth, very well-rounded smoke that’s earthy and spicy with notes of chocolate, citrus and a slight floral component. I think it’s one of my favorite sticks in the Punch line up and I recommend it, you know, only if you love delicious, aromatic cigars.

Here’s the truth, are you ready – I freakin LOVE this cigar and I always have since day one. Camacho’s are known for one special trait: being BOLD. Now they did a great thing when they took their full-bodied inner blend and wrapped it with a smooth and creamy Ecuadoran Connecticut wrapper. What this ingenious move did was tone the cigar down a tad, making it smoother and very palatable to smokers who don’t necessarily want a wallop to the tongue every time out. The inside boasts a wickedly tasty blend of Honduran and Dominican long filler along with a rich and hearty Honduran binder. It’s just so well balanced with notes of sweet cedar, leather, and a really pleasant earthiness. When you’re not in the mood to be bowled over with strength but still want a cigar with a whole lot of delicious oomph to the taste buds, this is the cigar that will make your day.

How about commenting below on what you think about the list or tell us some of the Honduran cigars you have grown to know and love!

The CLE corojo is my daily smoke . I love it

AB, CLE, and the Camacho are anytime-anywhere for me.

I fired up a Punch Gran Puro last night, before I read the above review. Unfortunately, I found it to be a bit boring and disappointing. Burned well, good draw; just not much flavor. Maybe it was just a bad stick. I’ve got another to try; we’ll see.

The leaf by Oscar is one of the best Honduran cigars

The Edge in my opinion is just another same ole Rocky cigar. The others mentioned are really good. I favor the Honduran cigars over most. The bold flavor stands out.

Reading Time: 6 minutes What happens when a former cigar industry executive decides to get back in the game? If you have friends in the biz like Rocky Patel, among others, the sky’s the limit. Gary calls this Nicaraguan-forward cigar “opulent, complex,” and has all of the things that make it a unique boutique.

Reading Time: 9 minutes It took 80 years for Famous to roll out this limited edition anniversary cigar from Romeo y Julieta. The Cigar Advisor Review Panel took this soft box-pressed beauty for a test drive, and have no shortage of opinions on this very special release…