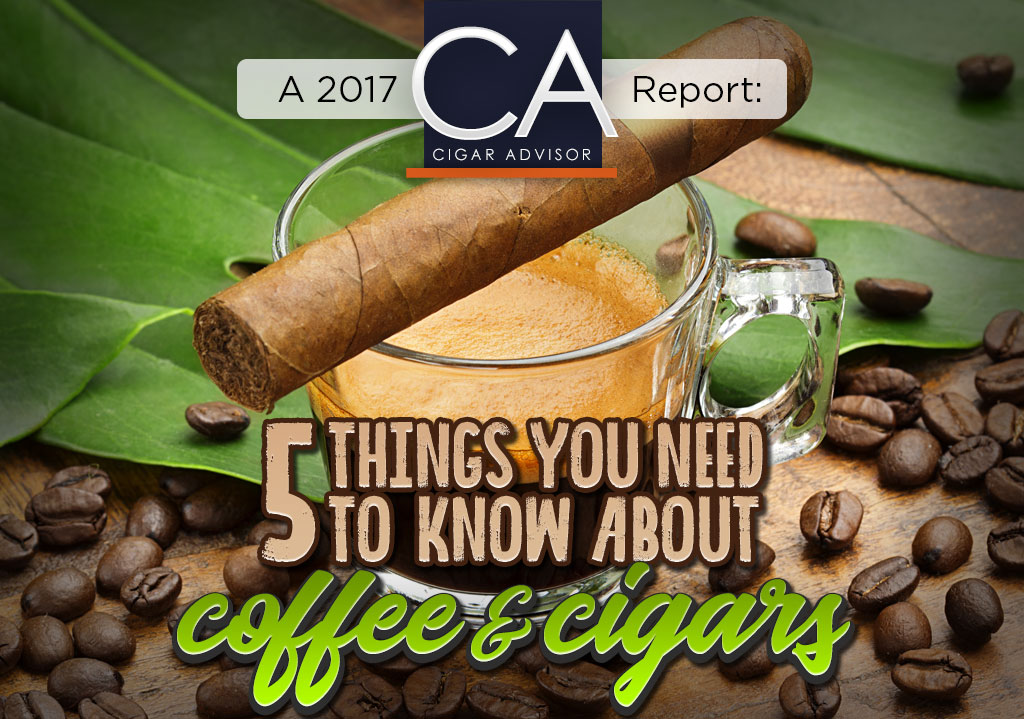 5 Things You Need to Know About… Coffee and Cigars

5 Things You Need to Know About Coffee and Cigars

And why they go together so well…

A whiff of fresh-brewed coffee. The scent of an open humidor, or the hint of a thick, oily Maduro-wrapped cigar being toasted. Your Pavlovian response is triggered as soon as you walk into the room, with their alluring aromas washing over your senses. Coffee and cigars hit you in many of the same ways; but that’s not all this duo has in common.

They go great together. And with all the brew and blend variations, the possible coffee/cigar combos are nearly endless.

Both have been enjoyed for centuries. Sometimes each is part of our everyday ritual, or savored in small doses, like after dinner. Both coffee and premium cigars start with a very hands-on harvesting process: much in the same way tobacco stalks are primed every couple of days, coffee pickers harvest only the ripest cherries from the tree – by hand – once every week to ten days. Tobacco leaves and coffee beans are both fermented, too. And just like cigars, coffee quality can run from the cheap fix you picked up at an I-80 truck stop, to a concoction of epicurean proportions that goes on your mental “best-ever” list.

There’s also a similarity between coffee and cigars in how we talk about consuming them; for that, we use a flavor wheel. The words on the wheel give us a shared vocabulary we can use to communicate with other cigar lovers, so they understand the flavors and sensations we’re trying to describe when we smoke. Beer brewers actually got that idea started in the 1970s, then wine aficionados followed. Now, a lot of things have a flavor wheel: beef, chocolate, bread, even dog food (really). You’ll see that a good cup of coffee can have a lot of the same tasting notes as cigars, just like wine and whisky do – and that’s why pairing them together is such a big payoff. A coffee and a premium smoke naturally complement one another, and we’re going to set out here to explain a few reasons why.

How coffee and cigars are made is just as important as where they’re made.

If we were to generalize, you could probably call the typical Puerto Rican coffee blend very strong and powerful; Colombian blends are often more balanced, creamy and bright. Nicaraguan and Honduran blends are also found to have “bright” flavors, meaning some mild acidity and tart-like fruitiness – others will show some subtle hints of cacao. These coffees may have a big finish, too. But more often than not, the flavors in a coffee really depend on the conditions under which the beans are prepped and roasted.

Same goes for cigar tobacco, where the curing and fermenting conditions have a huge impact on the outcome of the cigar’s flavor profile. Some Nicaraguans – like Padrons – have a strong coffee-like flavor, while some have a big, peppery bite from using Esteli-grown Ligero in the blend. Others can be more smooth, like cigars with a more generous amount of leaf from Ometepe (earthy, sweet) or Jalapa (sweet, aromatic). And depending on how long and how heavily they’re fermented, these very similar leaves can take on very different tastes once they’re ready to be rolled.

So just like we can’t describe all Nicaraguan cigars as fierce pepper bombs, not all Nicaraguan coffees are tart, rich eye-openers; where the crop is grown and how the raw materials are prepared makes the difference in the flavor “pop” in both our coffee and our cigars.

There is an ideal place for growing coffee beans and cigar tobacco.

For us cigar folk, the ideal cigar tobacco growing region is located…between the Tropic of Cancer and the Tropic of Capricorn. Same as the bean belt. And all the big tobacco players are in there: Cuba, the DR, Nicaragua, Honduras, Brazil, Cameroon, Indonesia, etc. etc. Yes, tobacco can be found growing as far north as Connecticut, Massachusetts and parts of Canada, and as far south as New Zealand; but those extremes are the outliers, like Hawaii.

Geographically, coffee beans and tobacco are kindred crops – which is why coffee and cigars go so well together. The soil is right, the weather is right, everything is just…right.

It is cigar myth #1 – that just because a cigar has a dark wrapper, it’s going to be a punishing smoke that dresses you down with gobs of nicotine and raw, brutal intensity. Ok, maybe some do. But many Maduros don’t, whereas some cigars with lighter colored wrappers are way more aggressive by comparison – evidenced by the last Camacho Corojo I smoked. A lot of Habano wrappers can pull it off, too.

And here’s where the potency in coffee and cigars are alike: caffeine holds up pretty well throughout the roasting process, so many dark roasts (like Maduros) can be pretty heavy-handed. But then there are some lighter Arabica beans that can produce a hell of a kick, depending on the species of tree and how long they’ve been roasted. And if you’re measuring out the grounds into your Mr. Coffee by the scoop (as opposed to by weight), some lighter roasts are the ones more likely to give you the jitters.

So just as not all Maduro cigars are stronger, neither are all dark roast coffees.

Coffee and cigars were both associated with the Devil.

Both coffee and cigars have been met with Old World controversy, as each has – at various times – been linked to the Devil. And it’s more than just because that Fuente Hemingway or those Liga 9’s are sinfully delicious.

Upon their return to Europe, two of Christopher Columbus’ shipmates were jailed for their tobacco smoking, called “sinful and infernal habits” because the Christian locals believed a man’s “power to exhale smoke from his mouth” could only come from Satan. They served 7 years in prison, all while tobacco smoking came into broad acceptance.

Similarly, legend has it that advisers to Pope Clement VIII pressed him to denounce coffee in the late 1500’s, calling it a “bitter invention of Satan” because of coffee’s popularity throughout the Ottoman Empire. But the Pope found this hot new drink too delicious to disallow, and reportedly said, “We should cheat the devil by baptizing it.”

It spread across Europe like wildfire, with coffee houses becoming an important place for people to meet and exchange ideas and information. They were often called “Schools of the Wise.” Which sounds a lot like a cigar lounge, actually.

Coffee and tobacco both act as a natural insect repellent.

So do morphine and cocaine, but that’s just overdoing it.

This is more than your cigar’s smoke keeping the bugs away, this is science: caffeine and nicotine are both alkaloids, organic compounds found in plants that “have pronounced physiological actions on humans.” When (most) bugs eat coffee or tobacco plants, they get jittery, too. The difference between us and the bugs is that we have a “reward system” in the chemical makeup of our brain that gives us a dopamine-riddled feeling of satisfaction when we smoke or sip coffee.

Translation: bugs don’t have the capability of having a dopamine rush; so while the pleasure of a caffeine jolt or a nicotine buzz (or euphoric coke rush) keeps us coming back for more, insects who ingest these alkaloids just twitch – without the feel-good part – and that’s a good enough reason for them to stay away.

So there you have it – five reasons why your cigars go so well with a cup of coffee, and why you’re so rewarded with flavor when you team them up. Got any pairings you’d like to recommend? Drop me a comment below.

Kona coffee and a Baccarat do it for me!!!

Drew estate Java Mint or Tabak especial are my morning coffee and cigar choice on the weekend.

A nice mocha and a Padron Aniversario are my favorite combo.

There’s nothing better than a double espresso with brown sugar and a touch of cream, paired with any of the 3 selections offered by Drew Estate, Tabak Especial, Drew Estate Naturals Big Dirt Torpedo, or my daily stick the Red Eye. Great Article Mr. Pullo. and greetings from Harrison,AR

Short black coffee with H.Upmann Half Corona is a great Pairing in the morning.

I am sipping on some “morning sunrise” and burning a “Padron”

Read More
Cigar Ratings & Reviews
My Weekend Cigar was a pure Nicaraguan experience: the Perdomo Habano Barrel Aged Epicure, in a sun grown wrapper...it's the nuts: clocking in at a hefty 6x54, it's full bodied, smooth, and very reasonable. See what else I have to say about My Weekend Cigar from Perdomo, in this short review!
Read More