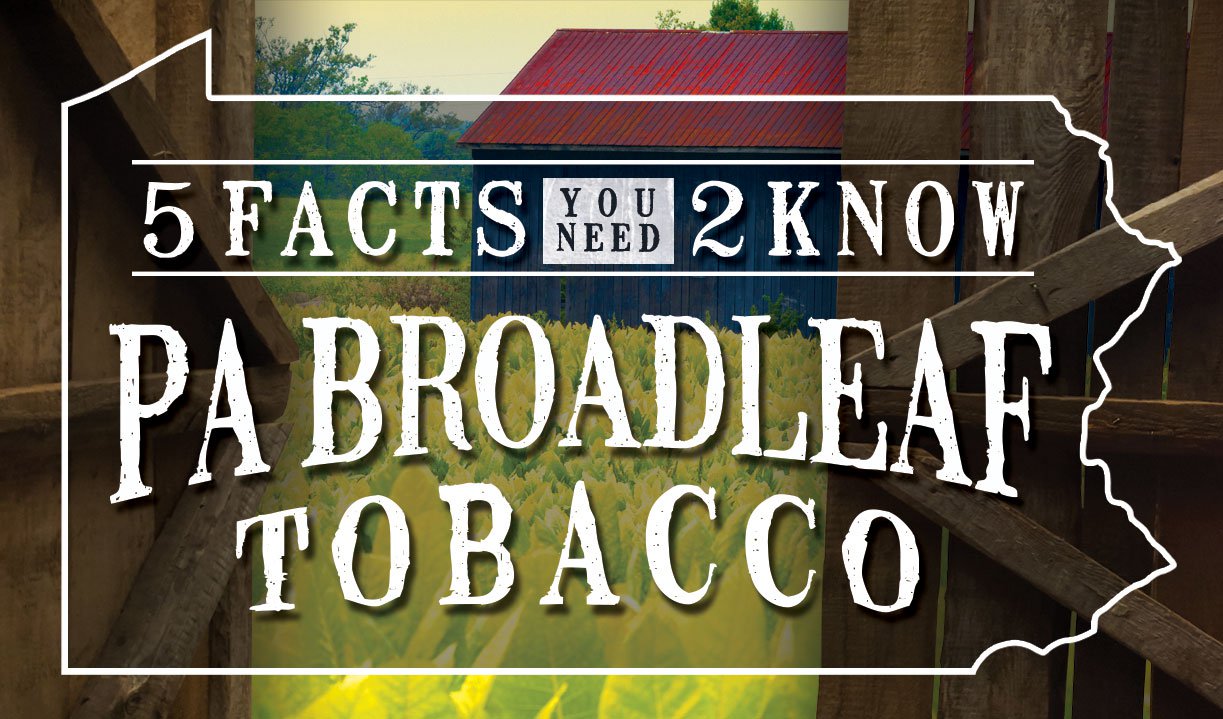 5 Things You Need To Know About… Pennsylvania Broadleaf Tobacco

Cheesesteaks, Yuengling (pronounced ying-ling), and potholes the size of moon craters are as Pennsylvanian as it gets – but what about the tobacco? We recently spent a day with the Drew Estate crew at their PA Barn Smoker which, as a life-long Pennsylvanian, led me down the rabbit-hole of what goes into growing and using this heavy tobacco in cigars. While it’s Connecticut cousin is the more popular of the two, many say this burly leaf is making a comeback.

Learning the different types of cigar tobacco can be confusing. There’s dozens of things to take into account: primings, growing regions, countries, styles…So instead of giving you an article that’s a mile wide and an inch deep about all the versions of the tobacco plant, we’re going to focus on one of the oldest tobaccos strains, and give you the rundown it truly deserves. So, what is Pennsylvania Broadleaf tobacco?

“Broadleaf is a dark tobacco varietal family popular for producing wrappers leaves that are enormous, resilient, and thick. These leaves are ideal for creating a Maduro colored wrapper. Broadleaf wrapper is not Primed, but rather the whole plant is stalk-cut when it matures.”

PA Broadleaf: it’s a Lancaster thing…Pennsylvania Broadleaf is exclusively grown in the Lancaster, PA area, mostly by the Amish and a few ‘English’ farms. The tobacco history of the region goes back to the early 1700’s. During the Revolutionary War, Virginian tobacco farmers expelled British firms and turned to Philadelphia for their tobacco. By 1859 Lancaster produced 65% of the state’s tobacco and was home to various brands such as Bayuk Brothers and Theobold and Oppenheimer. To this day, the oldest cigar shop in America, Demuth’s, still stands, though it’s currently an art museum.

What makes it Broadleaf? It’s not called Broadleaf for nothing. Growing to a monstrous height of up to 8 ft this plant is adorned with thick, gummy leaves that almost feel like rubber. While similar to their Connecticut cousins, the Amish farmers use a varietal called Pennsylvania Type 41. It does exceptionally well in Pennsylvania’s heavy soils and humid harvesting weather. Much to the detriment of the rollers, Broadleaf is often said to be a tough leaf to work with.

Don’t confuse it for Connecticut. While both tobaccos are ‘broadleaved’, there’s a vast difference between the two. The seeds are essentially the same; but both regions have a unique terroir and microclimate that affect everything from flavor to how they’re used.

What they have in common:

They’re the original ‘Stogies’. We all know stogies, the old cigar slang for cheap cigars, but do you know the origin of the word? 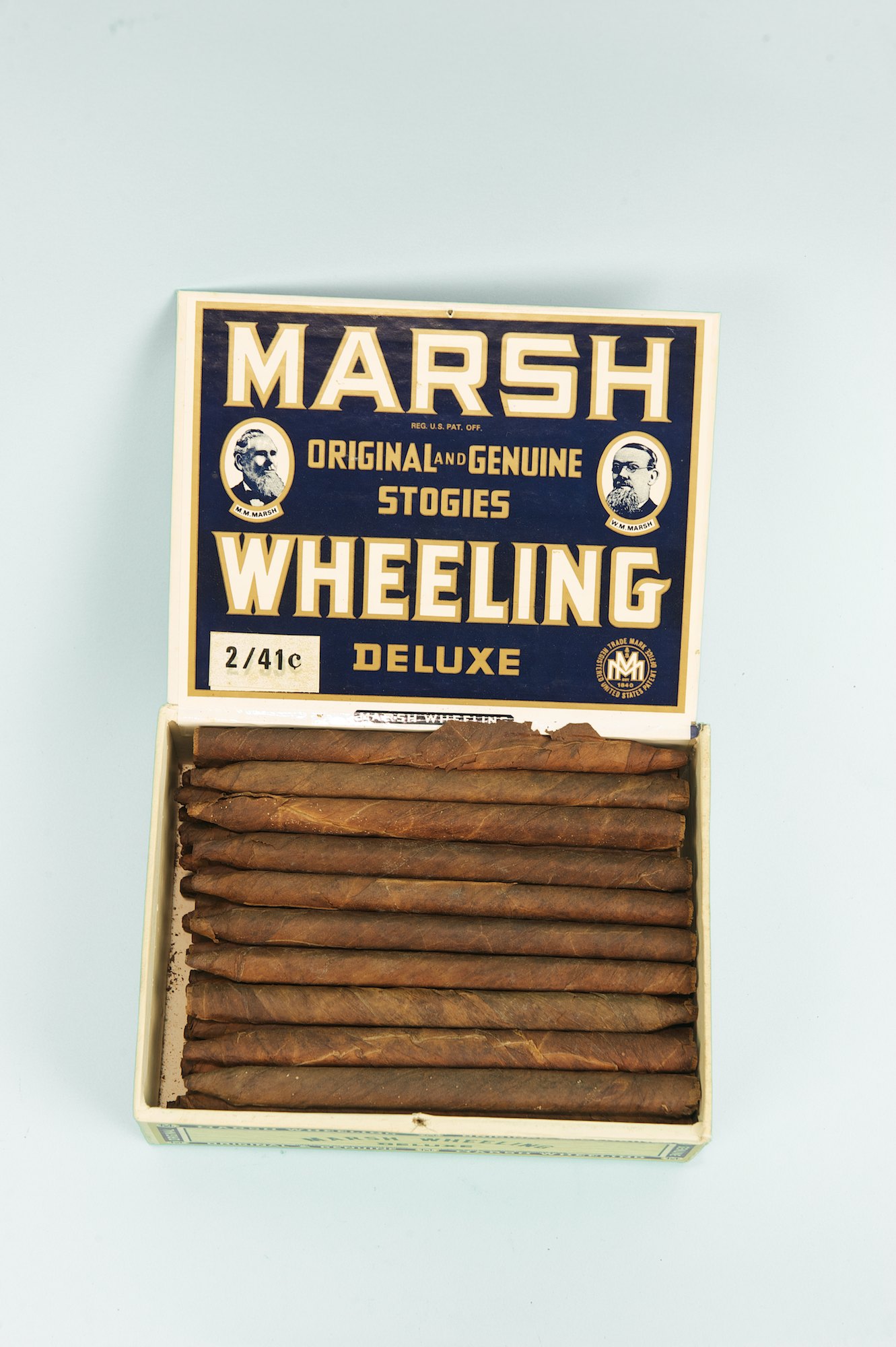 When Pennsylvanian tobacco was in its heyday, Conestoga, Pennsylvania was as well, but for wagons. From the 1700’s to mid-1800’s this sleepy Pennsylvanian town was pumping out its famous Conestoga Wagons, primarily used for freight and industry. The term stogie derived from the wagon masters who would often smoke long cigars, resembling the spokes of the wagon wheels. Further cementing stogies into American culture was the unveiling of the brand Marsh Wheeling in 1840, one of the oldest operating American brands and a self-described stogie. The rest, as they say, is history.

It’s making a comeback, “they” say…For the most part of Broadleaf’s career, it had been used as a filler leaf in cigars. Historically, Pennsylvanian tobacco could be found in local brands such as Phillies, Garcia y Vega, and Henry; but by the 1970’s all this changed. As all tobacco farmers know, the wrapper is where the cash can be found. According to Don Welk, 4th generation tobacco farmer and host to Drew Estate’s Barn Smoker, “On average, if the tobacco doesn’t meet the standards for cigar wraps, it will sell for $2 per pound to be used as filler. If the tobacco is of wrapper quality, it sells for about $4.”

PA Broadleaf’s newfound comeback began when AJ Fernandez unveiled Diesel in 2008, jumpstarting his career and renewing our interest in this heavy tobacco. In recent years we’ve seen more brands jump at the opportunity to use this leaf such as J. Fuego’s Vudu Dark, Southern Draw’s Jacob’s Ladder, and Camacho’s American Barrel Aged. On the other hand, we’ve seen some exciting blending by James Brown, of Black Label Trading Company, who added PA Broadleaf to his yearly-released Bishop’s Blend. It doesn’t end here though, as Drew Estate’s Willy Herrera is planning a PA Broadleaf-wrapped cigar (release date is TBD, for now) – and he kindly distributed samples to attendees of the Barn Smoker.

Do you think Pennsylvania Broadleaf is making a comeback? Write a comment below!

I’m smoking a Pa. Broadleaf Graycliff White Label as I am writing this, and it is quite tasty.
Thanks Pennsylvania.

Sincerely from the heart of Ga.

Reading Time: 2 minutes Hear Arturo Fuente Cigars’ Liana Fuente tell us about growing-up Fuente, her passion for cigars, the Cigar Family Charitable Foundation, and more in this edition of the Master Blenders podcast…

2018 CA Report: 10 Cigar Boom Cigars Your Humidor Shouldn’t Be Without