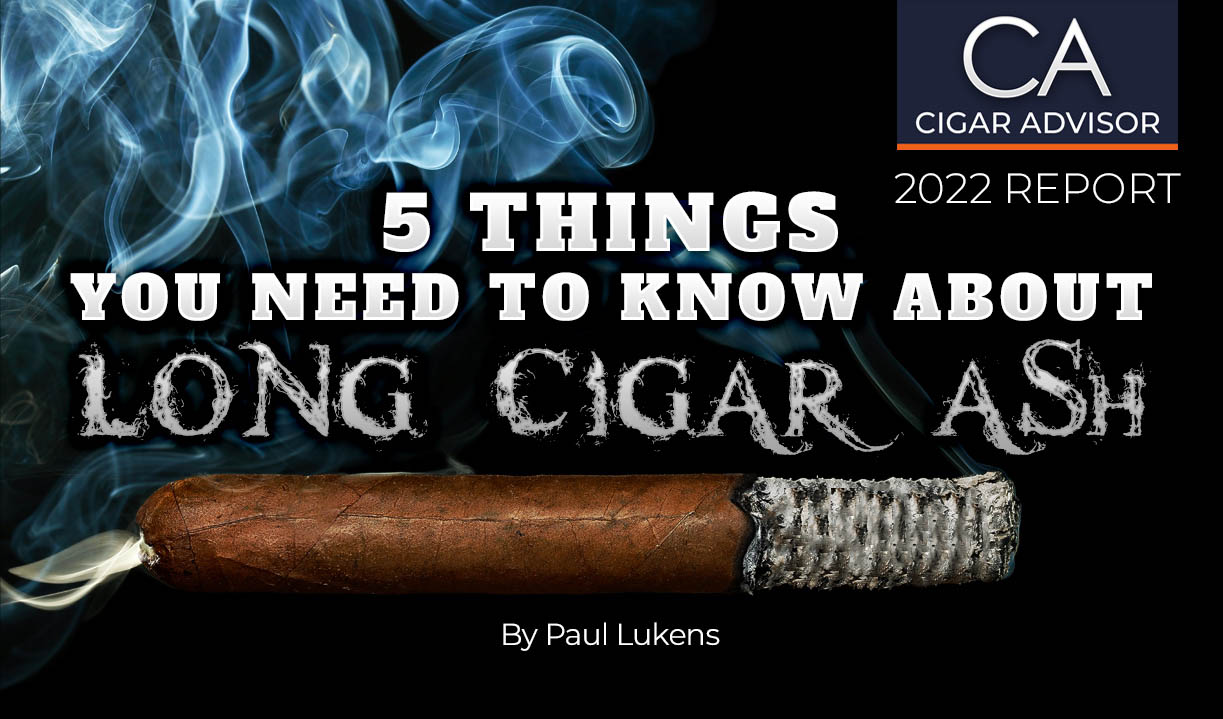 How do you get a long cigar ash? Do long ashes have benefits beyond bragging rights?

Look at that ash.

Being able to get a sturdy, long cigar ash has fascinated enthusiasts and non-cigar smokers alike. If you’ve spent enough time at your local cigar lounge then I’m sure you’ve noticed that guy, taking extra care to manage a long ash only to end up with a leaning tower—one that’s about to take a tumble onto his lap.

Even the old-timey lawyer—and cigar fanatic—Clarence Darrow knew the hypnotic qualities of a long cigar ash. As a means of distracting a jury, he would straighten out a paper clip and insert in down the center of his cigar. Then, he would light this rigged cigar as opposing counsel was about to deliver their closing arguments (just imagine being able to smoke a cigar in open court). The reported results were that juries became so distracted by if and when the ash would fall, they wouldn’t pay attention to much else. Whether true or not, this story—continually passed down by cigar smokers through the years—bears witness to how captivating a long cigar ash can be.

For those of you who want to go about it without the use of props or if you’re looking to enter a long ash competition at the local cigar shop—this info will help take you there. Who knows how far a long cigar ash can take you. What started as small gatherings and friendly bets has now grown into a worldwide event. Cigar Club Mareva, for instance, hosts the Cigar Smoking World Championship in exotic locations everywhere from Macedonia and Montenegro to NYC and Nashville, TN.

While having a big ash has a lot of benefits to your smokes, there’s certainly some little-known facts about a long cigar ash that might surprise you.

Thing 1: What’s with all the questions?

Firstly, be prepared to be asked why you won’t knock that ample ash off your cigar. Cigarette smokers are notorious for asking this question and it’s one of those areas where cigars and cigarettes differ immensely. Those paper-thin wrappers on cigarettes combined with the machine processing has made them far too brittle to build up any kind of ash – leading them to fall off without much incentive. If you try for a long ash on a cigarette, you’re basically going to make an ash of yourself. Cigars, however, have undergone the delicate process of fermenting, bunching, rolling, and aging – and combined with a nice beefy binder leaf and a thick long filler leaf, cigars can produce and hold a hefty ash.

Thing 2: Why You Shouldn’t Ash

“Why shouldn’t I ash my cigar?” This question poses a dilemma for most smokers. The general consensus is that a long ash, to a degree, helps your cigar burn cooler by filtering out the incoming air. This ash-filter keeps the cigar from burning too hot and helps build flavor (keeping in mind that taste and flavor are highly subjective).

However, there is a downside. The longer the ash the more likely the cigar will go out since it’s effectively being “smothered” by the ash. Remember, the “cherry” or “cone,” (the red glowing core of the ash) is now that much further away from air flow.

If the ash has become unsightly, or worse precarious and unwieldly, don’t go knocking it off willy-nilly. I’d recommend gently “tipping” the ash off by rubbing it against the side of the ashtray. Keeping just a thin band of ash will protect the cone and help the cigar burn more evenly.

A long ash is also an identifier of the quality of your cigar: the longer and tighter the ash, the better it was rolled.

For example, cigars that burn with a sharp, cone-shape ash have probably been rolled using a technique called “booking.” Booking is done by placing all of the filler leaves from the bunch atop one another, and then rolling them up like a scroll.

And then, there is an alternative method called “entubar” in which the filler leaves are each rolled into individual cylinders. It’s more labor intensive but patience pays off as cigars rolled using this style will tend to draw better overall and normally ash with a straight edge.

Finally, neither rolling approach is necessarily better than the other; it’s more a matter of manufacturer preference.

Others look at color of the ash. While ash color was never historically an indicator of quality, the trend caught on in the cigar boom in the 90’s. A nice white-ash, while having no effect on flavor, has more to do with the minerals in the soil as well as the tobacco leaves themselves. Once enthusiasts started picking out this quality, many cigar brands pushed their farms into fitting this new trend.

Selection has everything to do with the longer ash you’re craving. There are several factors to take into consideration when making your selection for that big-ash ash. First, pick a cigar you enjoy, something that YOU know is made well and has performed in the past – who smokes cigars they don’t like?

Does size matter? Absolutely. The thicker the cigar, the stronger the ash. The ash will get more structural support from those big ring gauge cigars because they use more long filler than your typical Robusto. I personally wouldn’t recommend anything over a sixty gauge; it’s a perfect amount of long filler and anything thicker can get pretty awkward to hold. As always, be certain the cigar has no soft spots, or you’ll be touching it up – sacrificing that beautiful ash you’ve been working on. Be sure it’s at the right humidity as well. If it’s too wet, it’ll go out and once again you don’t want to be relighting and touching up every other inch. To sum it up – try one of your favorite cigars with a larger ring gauge.

It takes a steady hand to wield an ash the size of a skyscraper – seriously. While you may be tempted to look at and admire your ash, all of this movement and turning can throw the balance off and drop it flat on your face. It’s important to keep things slow – both your puffs and your movements. Try not to set down the cigar too much, it’s just one more movement that adds to the drop risk. Keep those puffs down to about once a minute – just enough to keep the cherry going and let the cigar ash really accumulate.

It’s all about the angle! A little trick you’ll see most guys do, especially in long cigar ash contests, is to tilt their cigars upwards. I don’t need to tell you how gravity works, but it will lower the risk of ashing and help you attain that prized ash. There is, however, the inherent risk of ashing in your face, so be careful out there!

there you have it, 5 things you need to know about long cigar ash, and a bonus tip. Keep these little knowledge tidbits up your sleeve the next time you’re in an ash contest and you might be walking home with a sweet prize!

I knew of an Attorney back in the day who would light up his cigar at the beginning of testimony and after a time the jury was more intent on watching his ash build than listen to testimony. Of course he had a trick and that was to put a thin wire down the middle of his cigar. Never lost an ash!

shelley, actually he must of gotten that from winstion churchill, as you may know he was a avid cigar smoker and loved the long cigars which now bears his name the churchil which is usuaaly about 7 inches long and varying in ring size from 48 to 52. but most fokls dont know that his daughter smoked cigars too. they would have contests on who could have the longest ash, and winni would do the same with a paper clip.

One subject that I never see posted is about cigars that hold an ash without it flaking or crumbling. Anybody have a favorite or several for me .
I get so irritated when driving when they flake all over my shirt and seats. I love CAO for example, but Italia and Brazilia fall apart every 1/4″ inch