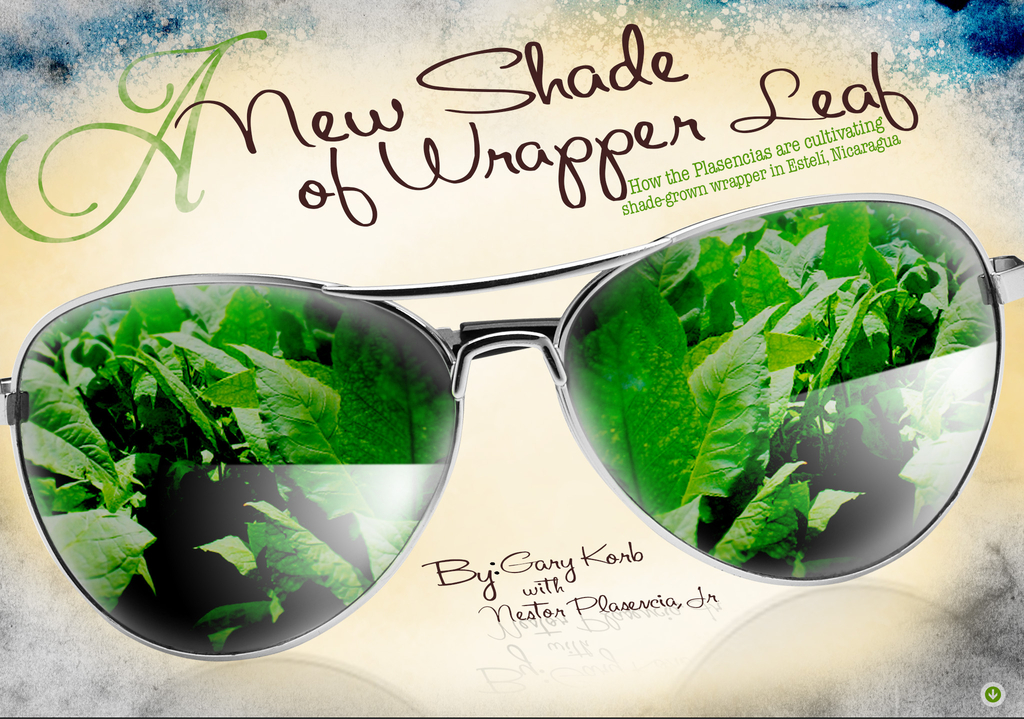 The first thing I think of when I hear the term “shade grown wrapper leaf” is Connecticut. Though it has also been grown successfully in Ecuador for years, even the experts would tell you that U.S. Connecticut shade-grown leaf is the finest and silkiest on the planet. Tobacco will grow pretty much anywhere as long as the soil is rich and the sunshine plentiful. Enter, Nestor Plasencia Jr., the man who introduced the world’s first “Certified Organic” cigar tobacco exclusively for making Plasencia Reserva Organica cigars, is now on a much more ambitious mission: growing Connecticut and Habano seed leaf under shade in Estelí, Nicaragua, considered the sunniest and most mineral-rich region in Nicaragua. I spoke with Nestor last month about this new venture and he filled me in on some of the details.

According to Nestor, shade-grown tobacco is “the most labor-intensive” tobacco to grow. Just putting up the cheesecloth tapado, or tent, that will cover an entire field is an arduous undertaking in itself.

“Tobacco can adapt to many different soils,” says Nestor. “However, the quality of the soil is going to have a major impact on how well the tobacco comes out. So, if you have a microclimate with the right soil and climate conditions, and people who know what they are doing, you can produce a really great tobacco.” 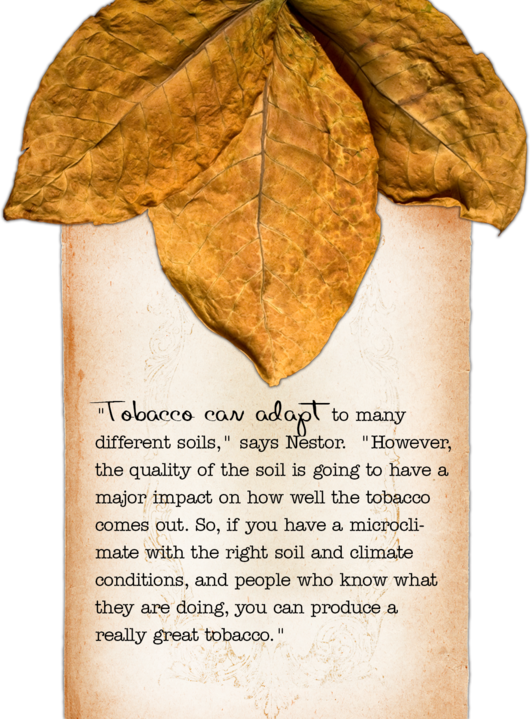 Growing shade tobacco is nothing new to Nestor. His family has been growing it for over five generations. Moreover, they raise shade-grown tobacco specifically for use as wrapper leaf.

“To grow shade-grown tobacco, you have to find a location with very specific conditions,” says Nestor. “It must be an area that gets a certain amount of precipitation, or rainfall. We also look at the amount of relative humidity, wind velocity, and the mineral content of the soil. Unless you are sure that all of these conditions are right, you cannot produce a good-tasting tobacco crop.”

The Plasencia’s have been cultivating shade-grown tobacco in the Jalapa Valley for a number of years. In 2012 they planted their first crop of shade-grown, Connecticut seed wrapper in Estelí where the soil is much richer and produces a much stronger and richer-tasting leaf. This was also the first shade-grown crop grown in Estelí in 35 years. To their delight, the crop produced an excellent harvest.

“For the next season, which starts in November, we will plant another shade-grown crop in Estelí using Habano seed,” added Nestor.

Both the shade-grown Connecticut and Habano crops will be used exclusively for wrapper. Consequently, the wrappers will have their own unique flavor characteristics. Since there will always be a number of leaves with noticeable imperfections such as blemishes, holes, protruding veins, etc., they cannot be used for wrappers. To make up the difference, Nestor must grow and age enough Connecticut and Habano shade wrapper to last for years.

According to Nestor, like any tobacco variety, shade-grown tobacco varies as well, so it’s important to understand the process of growing shade-grown wrapper. Once the plants have been placed in the soil, a translucent white cheesecloth is placed over the entire field.

“When seen from above, the field looks like it’s covered with a beautiful blanket of snow,” says Nestor. “We place the cheesecloth about 10 feet high which filters the intensity of the sun by 30 percent, while giving the plants plenty of headroom to grow.”

The result of this cheesecloth filtering process are tobacco plants that are much taller, produce bigger and thinner leaves, and are much more attractive in color and texture.

“This is why we plant this tobacco exclusive for wrapper leaves,” says Nestor. “You want a very beautiful leaf with virtually no imperfections.”

Producing such leaves is also much more challenging, because you want to have as much “perfect” wrapper leaf as possible for rolling cigars.

“If a leaf has any tears in it or other imperfections, it cannot be used for wrapper, so we will put it aside and use it for filler,” says Nestor.

Estelí , Nicaragua is known for producing some of the world’s most potent and flavorful ligero, which is why it is most often used as filler for adding more strength to a blend. So, I asked Nestor if the shade-grown leaf he’s growing in Estelí also produces a stronger wrapper.

“Yes, for sure,” said Nestor. “That is because the soil in Estelí is so rich in organic material and other nutrients, it makes for a much richer-tasting leaf.” 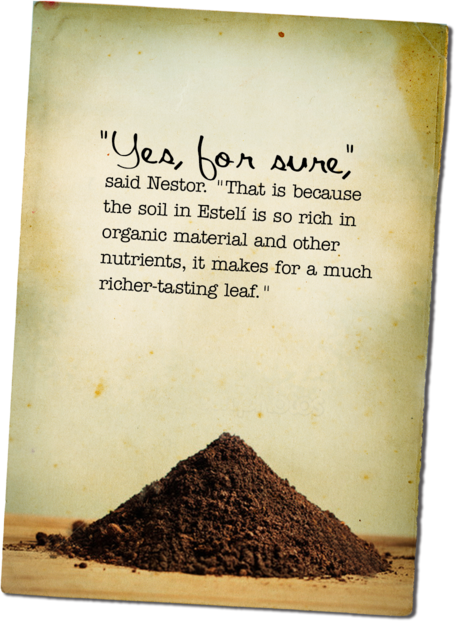 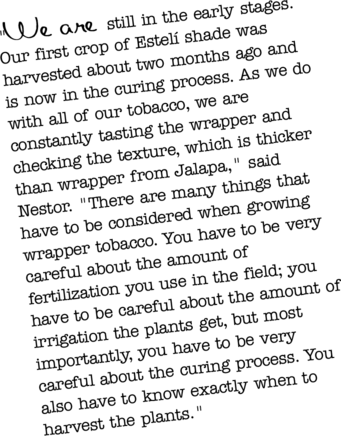 During the curing process, the leaves will hang in the curing barn for a period of 48 days. During that time they will go from green, to yellow, to brown, and then to a beautiful reddish color.

“Curing is a beautiful process,” says Nestor. “But all of the hard work that was done in the field growing the plants can be ruined in one day if you do not pay close attention to the temperature, humidity and airflow in the barn.” 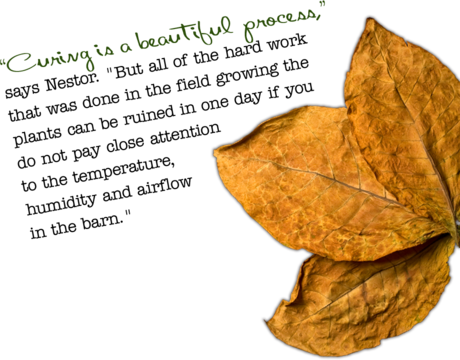 Insofar as tasting these Estelí shade-grown wrappers on cigars that will be made in the future, they will certainly be used. However, Nestor stressed that during this continual growing and curing process, he wants to make sure that all of the plantation workers know the process inside and out.

“The people who work for us are our biggest asset,” says Nestor. “They must understand the process so the leaf can be produced consistently. The people who are working with us on the shade-grown are extremely knowledgeable. They have tobacco in their blood. We want our wrapper to be the best, like the finest from Cuba in its heyday.”

So when will this wonderful wrapper be ready to be rolled into cigars? Nestor says that about a year after harvesting, they will see how the tobacco is developing during fermentation.

“We will take leaves from the aging room and start playing with the Seco, playing with the Viso, and the Ligero using different combinations at different times,” said Nestor. “We are not going to rush any of the process. We will listen to it, and the tobacco will be ready when it’s ready. “

“Again, it comes down to the people,” says Nestor. “Especially those in the field, because the wrapper is created in the field. It’s very intensive work, but when you get a great result you also get a lot of pride.”

[…] of leaves, Nestor also gives a short class on how and why they do tobacco seed hybridization, including how altitude, weather, and soil affect […]

Can anyone recommend me the best product from the list mentioned in this site.
https://householdneed.com/best-underwater-fishing-lights/

Nestor Plasencia is a tobacco grower and cigar manufacturer - and a Cigar Advisor contributor.

Reading Time: 4 minutes Aganorsa Leaf’s famed Nicaraguan Corojo Shade wrappers make their debut on the Famous Smoke Shop exclusive cigars list. Cigar Advisor’s Jared Gulick lights one up and gives the skinny on the cigar’s flavors – see his full cigar review on Aganorsa Leaf Exclusivo and find out if it should be in your humidor.