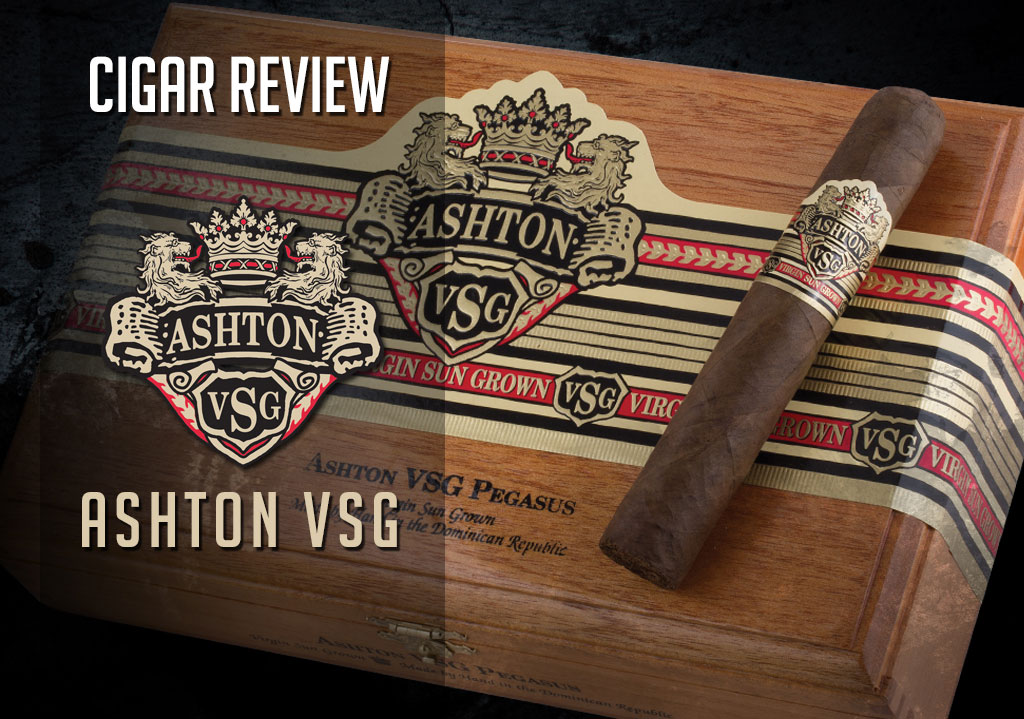 No Ashton VSG Cigar Review would be complete without a quick rundown of the Ashton brand, which was created in 1985 by Robert Levin, a Philadelphia tobacconist. After years of experience as an importer and retailer of cigars, Levin decided to break into the manufacturing side. Today Ashton cigars are made by the world-famous Fuente family in the Dominican Republic, and are offered in six unique varieties: Ashton Classic, Ashton Aged Maduro, Ashton Cabinet, Ashton Heritage Puro Sol, Ashton VSG (Virgin Sun Grown), and the ultra-exclusive Ashton ESG (Estate Sun Grown).

Ashton VSG is made using a powerful blend of Dominican tobaccos that have been aged four to five years by the Fuente family. The cigar’s distinctive flavor comes from the proprietary wrapper leaf which is grown exclusively for Ashton VSG. The wrapper is grown under cloud covering and harvested from the higher primings of the plants, which equates to a stronger, more flavorful leaf.

For this Ashton VSG Cigar Review, I smoked several of the 7 1/2″ x 54 Spell Bound vitola, a straight-sided Churchill shape (or Double Corona, depending on whom you ask). Each cigar was consistent in appearance, color, and draw. The wrapper is a deep, rich brown color referred to as “colorado maduro.”

Both the wrapper and the foot produced a sweet, aged tobacco smell with a bit of earthiness. This sweetness was echoed after I sliced the cap off with a guillotine cigar and took a cold draw off the unlit cigar. I detected a tingle on the lips, a nod to the cigar’s impressive power and full body.

I enjoyed the pre-light flavor so much that it was almost a shame to light it for our Ashton VSG Cigar Review. But what would a review be without actually smoking the cigar? Regardless, the cigar eagerly took to flame, and as I toasted the cigar, I noted that it took quite a bit of time to get it properly lit. But given the high percentage of heavy ligero tobaccos in the blend, this was time well-invested which would ensure an even burn throughout.

Once lit, I immediately detected strong flavors in the woodsy to earthy-spectrum, along with a bit of pepper and spice through the retrohale. While not overly complex, the texture of the smoke was full-bodied and creamy, and sweetness came through to complement the other flavors. Each cigar I smoked for this Ashton VSG Cigar Review burned for over 2 hours; during that time, the flavor and aroma didn’t transition so much as they intensified.

With an MSRP of $14.50 per cigar, the Ashton VSG Spell Bound cannot be considered a daily cigar except for the most dedicated (or affluent) cigar smoker. Furthermore, while quite refined, VSG’s impressive strength and

body may be overwhelming or inaccessible for newer or milder cigar smokers. However, for veteran cigar smokers looking for a celebratory or “special occasion” cigar, Ashton VSG fits the bill nicely. Moreover, they come in a variety of shapes and sizes including several smaller ring configurations, which really allow the special wrapper leaf to shine.

Have you tried or wanted to try Ashton VSG? Check out Ashton’s official site for more info! Please comment below with your experience, and don’t forget to share our Ashton VSG Cigar Review on your favorite social networks.

Reading Time: 4 minutes One last taste for 2020: watch our Diesel Estelí Puro cigar review video! You can tell these tobaccos are well-fermented and aged – how do we know? open now and see…