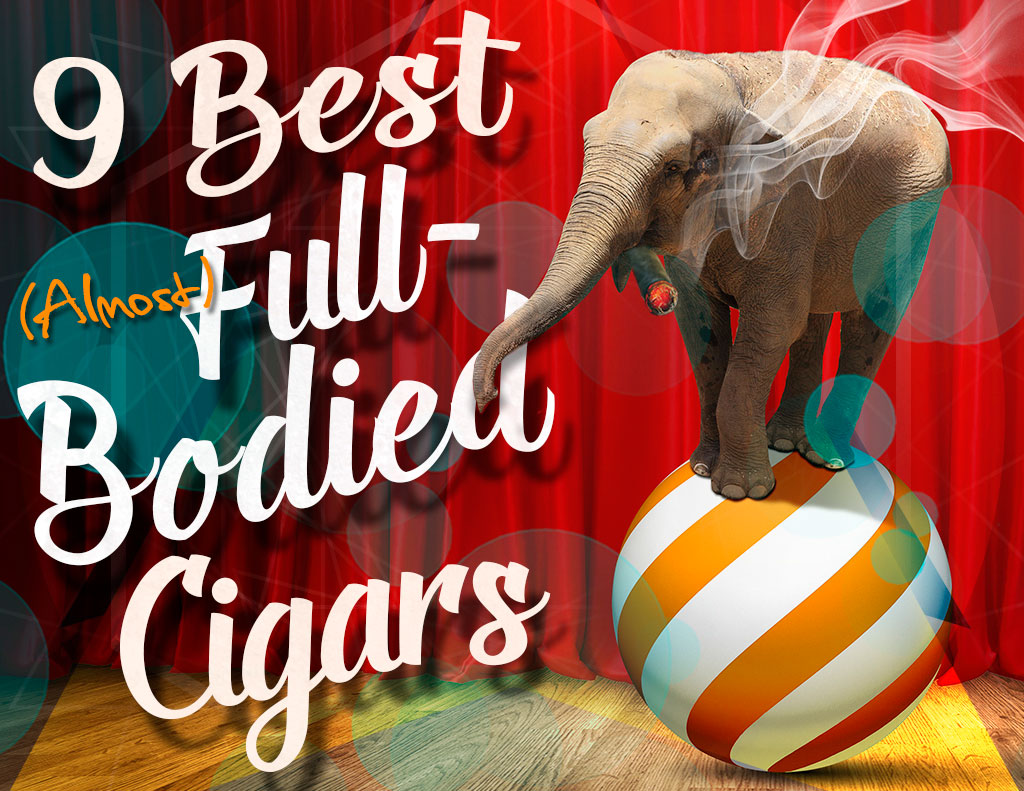 Been keeping an eye toward new blends hitting the market over the last few years? With just a glance at the scoreboard, you noticed what could almost be a trend: full bodied cigars have been winning the day when it comes to availability and selection. Even the many Connecticut cigars that have landed in the past year or so have leaned well away from mild. But then something happened. The chase for flavor, and a more savory experience from start to finish, began displacing the full-tilt flamethrowers that favored strength above all else.

Could it be? Are cigar makers backing their foot off the gas pedal a little bit? It would seem that way, given the more recently released sticks that comprise our latest report: almost full bodied cigars from the past year, give or take a couple of months. Oh, they’re heady, alright; but these cigars have been blended to oblige your taste buds with a flavorful reward over a case of the nicotine sweats. And that’s the difference with this list of smokes…each nestles itself into that gray area between medium and full bodied cigars that is commonly called medium-full (or medium-plus, almost-full or whatever term you prefer to use for it).

Make no mistake, the old toughs will still call each of these a “real” cigar. But with a slightly less-volatile-than-nitroglycerin profile, each is very approachable in your hunt for smoke-filled satisfaction. So polish off a Porterhouse and a glass of your favorite adult beverage, then light one of the following nine cigars and try not to look too content. Good luck with that.

Sleepy. Dust-gatherer. Moribund. Needing a breath of life. Those are some of the phrases I’ve seen used recently in connection with Henry Clay. Downright disrespectful if you ask me, as Henry C. is the OG of maduro cigars, bringing massive Broadleaf flavor to the game before people cared about such things. Then suddenly, Henry Clay was the hottest thing in a box of 20 when the Tattoo edition debuted last year. So that’s about when Altadis’ Grupo de Maestros blending team said “stand back and watch this.” The Maestros proceeded to go through every aging room in the factory to pull out a blend of vintage Dominican and Nicaraguan tobaccos, then wrapped them in a stalk cut CT Broadleaf that’s about as rich as it gets. Flavorful and then some, it’s the best Clay to date.

Respectable boutique sticks are rarely without an interesting background or inspiration, and Intemperance calls up the appropriate inside story with its name – a nod to Prohibition, its repeal with the 21st Amendment, and how tobacco has amazingly replaced alcohol as the new taboo. RoMa Craft’s founders believe it’s time for a modern intemperance movement, and this is one of their statement sticks. Crafted with Nicaraguan and Dominican fillers under an oily, high-sheen Brazilian Arapiraca (the “BA” part of the name), this Intemperance smokes extra-smooth thanks to an Indonesian binder that’s been added to the mix; less potent than its CroMagnon cousin, it’s a much more approachable almost full bodied cigar that rewards handsomely with a wealth of flavors.

The CAO Flathead has much to admire – but if you’re not a fan of box-pressed cigars, you probably felt left out. No longer: the blend is a bit different (and I do like this one better), but the squared-off cap remains, lending itself to a punch for max enjoyment. On the inside, it’s the whole damn CAO toolbox thrown into the mix: Dominican, Nicaraguan and Honduran long fillers, Arapiraca binder from Brazil, all wrapped up in a unique Connecticut wrapper that has the sheen of an oil slick. You may need to make a touch up on it now and again, but know that Steel Horse should satisfy your inner road dog by opening full throttle from the first puff.

When Crowned Heads released a smoke called the Las Calaveras Edición Limitada 2014, the heads of boutique cigar devotees exploded. The sticks sold out quickly, and Las Calaveras rode off into the sunset. Then along came La Imperiosa – lo and behold, it was the same recipe. And to sweeten the pot, it’s now a regular production smoke (just in different sizes). Intrigued? Here’s more…Nicaraguan binder and fillers are grown on the Garcia farms; at the My Father factory, an Ecuadorian Habano wrapper is added that’s been cured to a deep, dark Oscuro with some tang to it. It’s actually the second coming of La Imperiosa, as the original was an antique Cuban brand; the new one is almost-full, peppery and diverse.

There’s more to embracing the shift towards Nicaraguan taste beyond upping the intensity, and adding “Nicaragua” to the name. VegaFina, The Griffin’s, Kuuts, Alec Bradley, Avo and perhaps most famously, Davidoff, know this and have all done it; Cohiba Nicaragua came to play in 2014, but you might not have noticed…and that is unfortunate. Because here’s what you missed: Esteli long fillers, Jalapa binder and a Honduran Sun Grown Colorado Oscuro wrapper. Resulting are some seriously full bodied cigars that pair big rips of smoke with dynamic flavors (ranging from dry and spicy to sweet and smooth) that get more aggressive the longer you smoke. All I’ll say is that the blenders earned their money with this one, as I think you’ll be pleasantly surprised that Cohiba is capable of such a scrumptious show of force.

Have you been overlooking Hoyo de Monterrey the past few years? I can say I’m guilty, too – considering this used to be my go-to full bodied cigar back in the day. But Hoyo has just notched 150 years in the business, and done so in a way that’ll make you sit up and take notice…enter the Hoyo de Monterrey Edición de Cumpleaños 150: select Nicaraguan tobacco on the inside, and Ecuadorian binder around it and – for a finishing touch – a shimmering, shade-grown Habano wrapper. We talked to Nestor Plasencia about 2 years ago about shade-grown Nicaraguan wrapper, and he had high hopes for what he was cultivating; if this is the result, it was worth the wait. Word to the wise, because this modernized Hoyo is being made in a limited fashion, move fast – or you’ll miss out.

The problem with cigars from Mexico isn’t the cigars, it’s the ignorant cigar-tasting horde who still believe that the industry is churning out the cheap ropes that NYC cabbies smoked circa 1960. To those folks I say, get over it. The Turrent family, they of Te-Amo, grow some of the best authentic San Andres tobacco out there. Many of the major players recognize this, and proudly feature it in their blends: Davidoff. Avo. Macanudo. Montecristo. Liga. La Aroma de Cuba. Carrillo. I rest my case. Debuting in the U.S. at the tail end of ’15, Casa Turrent takes the family’s highly-regarded San Andres leaf and pairs it with punchy Nicaraguan long fillers and a double binder to fashion their flagship smoke, the house cigar at the A. Turrent lounge in Mexico City. Cigar reviewers take a backhanded shot at Mexican cigars and say how good they taste, “in spite of the fact that they come from Mexico;” Casa Turrent just might have them whistling a different tune.

“Limited Edition” is an interesting term, thanks to Punch’s application. Made only twice a year, Punch Rare Corojo draws and discards vitolas in a Gin Rummy-esque manner, dumping one size then adding a new (and different) shape to their lineup each year. For 2016, it’s the 7 ¼ x 54 figurado, the Regalias perfecto, that’s new to the game; and it’s a near-full stunner. The Punch folks start with a fat blend from the Big 3 (DR, Honduras, Nicaragua), add a CT Broadleaf binder and finish it with an Ecuadorian Sumatra wrapper for a savory 90-minute smoke. The Punch Rare Corojo Regalias is a palate-broadening experience for sure, and the fact that it retails so far under 10 bucks it’s obscene – as perfectos are no easy cigar to roll.

It’s the age-old debate: are Cuban cigars better? The folks at Alec Bradley think it’s time to drop the Embargo, level the playing field and let everyone put their cards on the table to see. AB’s entry is Post Embargo: rolled with Nicaraguan and Honduran binders and long fillers, Post Embargo is dressed with a Honduran wrapper at the Raices Cubanas factory, as is the Alec Bradley way. It smokes near-full with well-defined flavors – a lot of them – and a mystique-free, mano a mano challenge with a stick like this is what Alan Rubin (AB’s CEO) believes is necessary for smokers to put this whole Cuban/non-Cuban thing to rest.

I’m a fan of almost everything Crowned Heads puts out, and I know La Imperioso is the stick everybody raves about, but for me it’s just so-so. Sacrilege to say that, I know. I think I’ve smoked five or so by now, and only one really piqued my taste buds. I’m letting the remainder I bought rest a few months and will retry. That’s the crazy thing about cigars. Sometimes resting takes a so-so stick and turns it iconic.

Good list but of course I can add a few more….