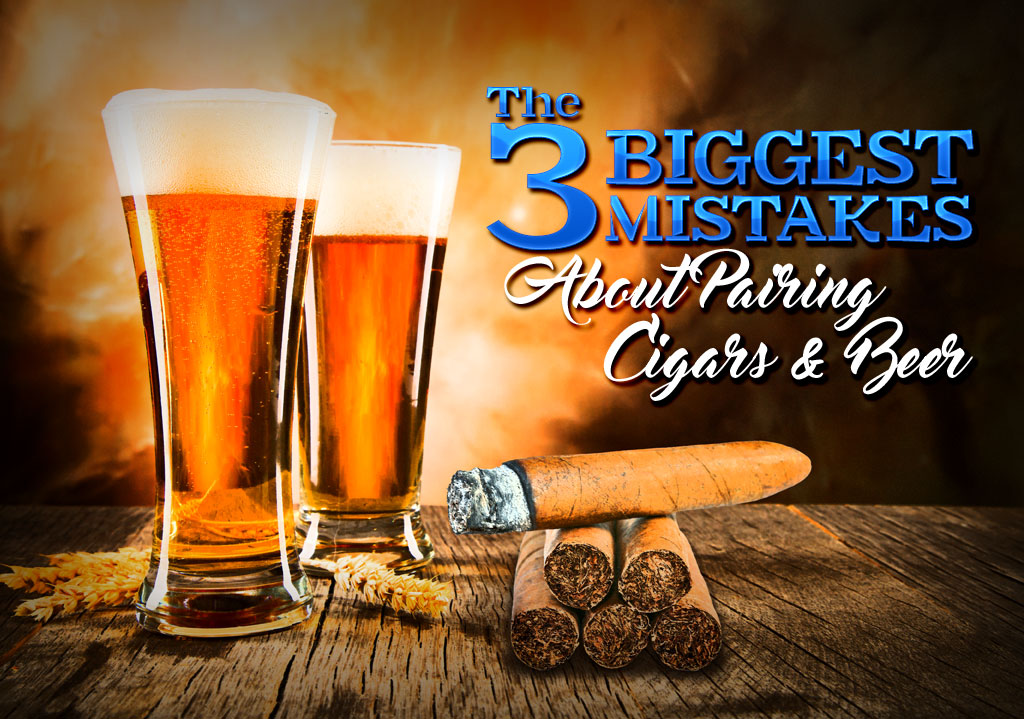 Avoid These Top 3 Mistakes When Pairing Cigars and Beer

For many years, cigars have been compared to wine: talk of vintage ingredients, aging, handcrafting and ultimately, enjoying them together. Or even better, pairing cigars with spirits (more on that here). But as craft beer has become an undeniable movement, more of us are turning to a cold, handcrafted brew to enjoy alongside a smoke. The problem: how do we know we’re doing it right?

For starters, make a comparison to something you already know. Much like how cigars had theirs in the 90s (and maybe we are again?), we’re in the midst of the Beer Boom. And much like wine and cigars, craft beers are being examined with even more scrutiny, to the point where we’re now overhearing heated discussions on hoppiness, finish and body – the same way you’d hear a cigar lounge discussion about creaminess of the smoke, finish and, well, body. There are a number of similarities now between how cigars and beer are discussed and enjoyed, and even more to talk about when you’re pairing cigars and beer together.

As for how to choose the right beer pairing? Well, I’m no beer expert – so you could cut and run straight for the expert cheat sheet, consulting a cigar pairing guide like the one we just put together with the help of some pros. Or you could do it the old fashioned way, and experiment. While I was schooling myself on beer, I came across a Thrillist article that mentioned some beer myths…and boy, did they sound familiar. So here’s the good news: because you’re already pretty well-versed in the nuances of cigars, you can see a pattern of comparisons – debunked myths, actually – that hold just as true for beer as they do for cigars. Since you already know to avoid making these cigar “mistakes,” let’s line them up next to some very similar misconceptions, or beer “mistakes,” just to prove how easy it really is to come up with a top-notch pairing…based on what you already know.

And to be specific, let’s talk about stouts and Maduros. You already know that many Maduro cigars aren’t all that strong (“Maduro” means ripe, not strong); some even tend to be a little sweeter, if they’ve been fermented an extra-long time. But it’s not a rule, as Maduro wrapper cigars can hit all strengths. So what Maduros and stouts have in common is actually an intensity in flavor – look at some of the Man Guide’s tasting notes, and you’ll see:

So avoid making the mistake that dark beers are more potent in alcohol content; according to Zach Mack at ABC Beer Co. via Thrillist, there are some IPAs that will put you on your ass faster: “I bet [it’s] twice as strong as the oatmeal stout you passed up.” Stouts pair great with a heartier cigar, and yes – some of them are beefier Maduros, which is why we picked the Inferno 3rd Degree, LFD Double Ligero Chisel and Flor de Las Antillas as respective matches that stand up well to the thick pour of a stout.

We’ve all had bundle smokes that burn better than box sticks. The cigar myths on bundle cigars run deep: they’re not true premiums, they’re low-class, and they taste bad because they’re seconds. Wrong, wrong and wrong because wrong. In fact, I’ll buy you a beer if you’ve never had a 10 dollar smoke that didn’t burn like a factory reject. It happens – and just to go to extra lengths to prove the bundle quality myth wrong, you’ll see cigars from Drew Estate that are crafted especially as premium, high-quality handmades, then bundled in a craft paper soft pack…Nica Rustica is one that immediately comes to mind:

Jesus Fuego does the bundle thing with some of his top-name premiums, and Tatuaje/L’Atelier/Pete Johnson’s El Suelo selections also stand out as a prime example:

Some bundles are a packaging choice; others do it because they save you a few extra bucks. For beer, more and more choices are showing up in cans…over 2,600 brands in 99 styles, according to CraftCans.com. Again, it’s a purposeful packaging choice – beer in cans is less likely to skunk when exposed to sunlight. Don’t be afraid to pick a canned beer for your cigar pairing partner; one of our selections was Six Point Brewery’s The Crisp, a pilsner that delights with malts and Noble hops. Take our advice and enjoy it with a Montecristo No. 1 (which is certainly no slouch in the quality category), and I’ll bet you’ll be pleasantly surprised:

Beer Mistake: Thinking you don’t like beer.
Cigar Mistake: WTF kind of thinking is that?

Well, you wouldn’t be reading this if you weren’t into cigars. But the thinking behind this common mistake is the same: maybe you’re still finding your way through the cigar world, and haven’t found the right one for you. There’s a lid for every pot, and sometimes it takes a while until you find it. The funny thing is, you may find “the one” – but after a while, decide to move on because it just doesn’t do it for you for as long as you have hoped. So maybe a more closely related myth would be: You just don’t taste any of the flavors in a cigar.

Don’t make the mistake of allowing yourself to be intimidated by the “super palates” out there who taste thirty-six varieties of pepper in their cigars; just because you don’t taste them, doesn’t mean you’re not able to enjoy a cigar to its fullest potential. If a cigar is truly spicy or peppery, even the most underdeveloped of palates will pick up on such an obvious flavor component. Even if your taste buds are hitting their limits at 4 or 5 flavors, you’re still getting enough from the smoke to amplify the experience by pairing cigars you like with a couple different beers, and seeing what happens. Be patient – those flavors will make themselves known to you soon enough.

All cigars are not created equal; neither are all beers. So try, try, try until you find one that grabs you. And when you find the right cigar or the right beer, look for complementary flavor notes in the other half of the cigar pairing that will complete the package. Want to try some of our ready-made matches for pairing cigars and beer? Visit our easy-to-follow guide and try, try try.

I have found that wheat beers are an excellent companion to a good cigar!

I am with Roger below. I found Montecristo first and wheat (Hefe) beer later, then fornd how well they compliment one another. Cheers Roger and Merry Christmas to all.

Hey just having a cigar and a craft beer is a good day. , I enjoy IPA’s and a CAO brazil

Reading Time: 2 minutes The Advisors’ WFH video series returns with more answers to your cigar questions about smoking outside, taking off your cigar band, and torch flame vs soft flame. Watch now!

CA Special Report: The 5 Most Extraordinary Cigar Events of 2016