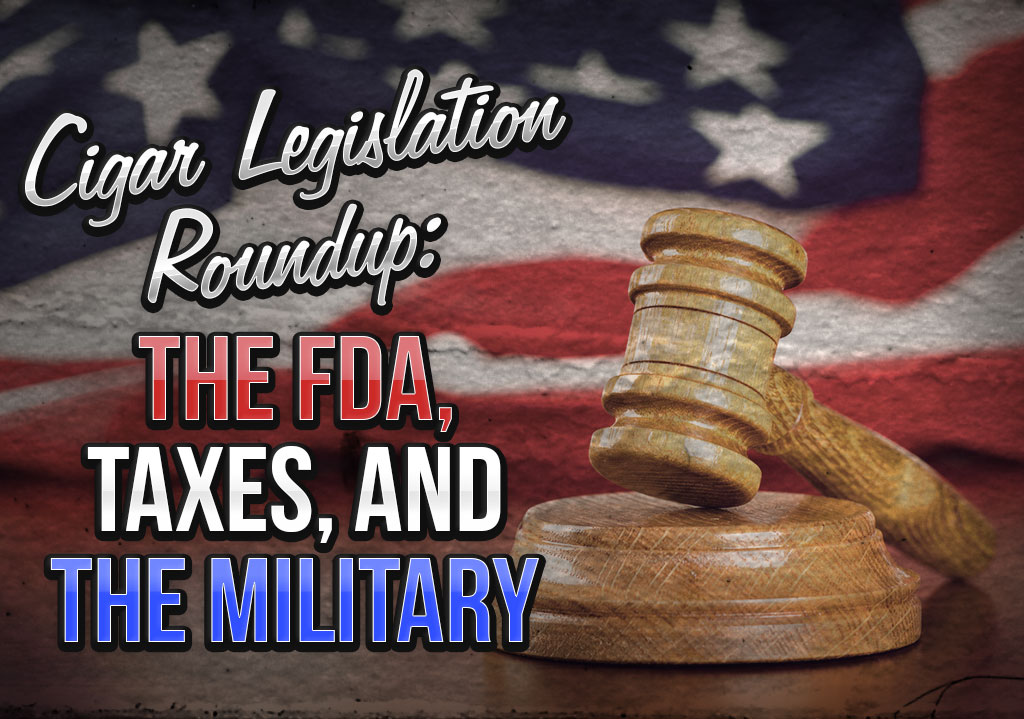 Why the FDA Has Cigar Legislation All Wrong

By now, we’ve all heard the news: the FDA has given us a look at what they’re thinking about doing to the cigar industry, vis-à-vis new regulations. Pending though they may be, it’s only a matter of time and outspokenness before they decide how hard to come down on cigar lovers. At the heart of the issue is how premium cigars are to be defined…they already have been, by various state legislatures; but now it’s time for the Feds to come up with something they feel is more formal. And the definition of what a premium cigar “is,” is really the subject of the debate if we’re to have any reasonable shot at the FDA moving away from regulating premium cigars.

As we’ve noted in the Tobacco Legislation Action Center, the FDA has proposed two options for the regulation of premium cigars: Option 1 would be for the FDA to regulate ALL cigars – premium, machine made, etc. – as the same kind of product, and in a category not at all distinct from cigarettes. Option 2 would make a new definition for “covered cigars,” under which the FDA would define premium cigars as:

While it’s a start, it’s not a very good one; if the FDA’s revamped cigar legislation is to set an arbitrary price floor for a premium cigar, any premium cigar under $10 per stick will be regulated into oblivion. Our friends over at Halfwheel put together a terrific piece showing the faulty logic and potential ramifications of the $10 price floor.

Do you enjoy an infused or flavored handmade cigar? That enjoyment may run afoul of the FDA’s idea to mandate approval of new blends in cigars, as well as #7 in their proposed definition, that a premium would not “have a characterizing flavor other than tobacco.” Stogie Guy Patrick S. drills down on the proposed regulations that would affect cigars like Drew Estate ACID, Rocky Patel Java, CAO Flavours, and many others. If the FDA proceeds with Option 2, he writes, it’s likely to mean “an effective prohibition (due to the difficulty of FDA approval) on cigars with ‘characterizing flavor’ other than tobacco. Even setting aside definitional problems, like the fact that the Fuente Añejo could be characterized as having a characterizing flavor because the wrappers are aged in rum barrels (or that the FDA has refused to say if cedar aging could be considered ‘characterizing flavor’), there is a big problem with the FDA’s rationale.”  Follow his thinking here: http://www.stogieguys.com/2014/05/05222014-commentary-the-fdas-unwarranted-targeting-of-flavored-handmade-cigars.html

The folks at humidity control device maker Boveda also raise an important distinction: the conditions under which the cigars are kept: “We think all the minutiae misses the single commonality of ‘premium’ cigars – the need to merchandise and store ‘premium’ cigars in the industry-recognized standard of 65-70% humidity. While some of the items up for consideration may have merit, we tend to side with ​New Hampshire’s law, which includes the sentence ‘These [premium] cigars shall be kept in a humidor at the proper humidity’, which doesn’t show up anywhere in the items up for FDA consideration on defining ‘premium.’” You can read more of their points here: http://www.bovedainc.com/thoughts-makes-cigar-premium/

The FDA also wants to more closely monitor the coming-to-market process, and require cigar manufacturers to submit new blends for testing and approval. According to Halfwheel, the FDA estimates that between 10 and 50 percent of the cigars on the market today will exit the market after the proposed regulation due to the increased costs.

Federal regulators haven’t limited the scope of their deeming regulations to just premium cigars…if you happen to enjoy an e-cigar or other electronic smoking device, the Administration – based on input from groups like the World Health Organization – is looking at imposing heavy regulations and restrictions on these products you enjoy as well. As a pre-emptive measure, some of the world’s top scientists have warned WHO not to classify e-devices in the same category as other tobacco products because, according to these scientists, e-cigarettes are a “healthier alternative to traditional cigarettes.” The story appears in Time magazine: http://time.com/135777/e-cigs-tobacco/

On the tax front, New Jersey has taken to the spotlight with state legislators’ proposal to extend Governor Chris Christie’s proposal to tax e-cigarettes at the same level as conventional tobacco products. Per the CRA, New Jersey’s cigar legislation currently calls for a tax at 30% of wholesale price; if this measure is taken up in the Garden State’s budget, e-cigs, cigars and smokeless tobacco would all be taxed in parity, according to njspotlight.com. http://www.njspotlight.com/stories/14/05/20/bill-would-extend-tobacco-tax-beyond-e-cigarettes-to-cigars-other-products/

CSP Daily News noted some numbers that came out of a recent New Jersey Senate Health, Human Services and Social Services Committee hearing, where instead of just a 75% tax on the wholesale cost of e-cigarettes, their amendment would “equalize” the tax on all other tobacco products with the state’s $2.70/pack cigarette tax by proposing the following increases:

You can read more of Thomas Briant’s article, and argument against tobacco tax parity, here: http://www.cspnet.com/category-management-news-data/tobacco-news-data/articles/impact-tax-parity-retailers

Good news for Mainers – the Cigar Association of America (CAA) announced that its lobbying efforts to prevent a tax increase on cigars and pipe tobacco paid off. An amendment to increase taxes on cigars and pipe tobacco was unanimously defeated during a Joint House and Senate Appropriations Committee meeting, at which they adopted a state supplemental budget. And since the legislative session is now over, the CAA says the Maine tobacco tax threat is now behind them – as they don’t anticipate other threats on that state’s tobacco taxes in 2014.

Defense Secretary supports forcewide review of tobacco use and sales

While the Navy reportedly pushes ahead toward eliminating tobacco sales on all its bases and ships, as well as all Marine Corps facilities, Secretary of Defense Chuck Hagel has signaled his support for opening an internal dialogue about reforms in how and where the military allows tobacco purchases to be made, “as well as the need to consider tobacco-free installations.”

Per the Military Times, DoD spokeswoman Army Lt. Col. Cathy Wilkinson said the department “is in the initial stages of reviewing its tobacco policies” and emphasized that “no decisions on any possible or potential changes have been made.”

Reading Time: 7 minutes La Gloria’s cigars have always been ahead of the curve, but does the La Gloria Cubana Spanish Press selection keep the momentum? Watch now as John, Gary, and Jared put the Robusto to the test.