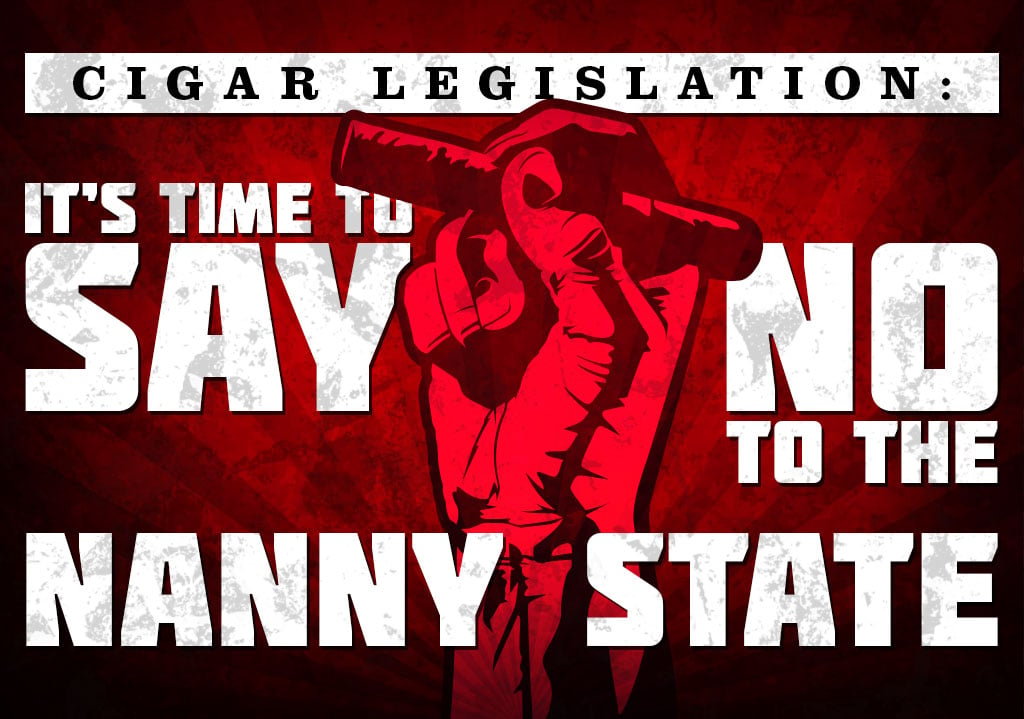 Cigar Legislation? It’s Time to Say No to the Nanny State

“I’m as mad as Hell and I’m not going to take this anymore.” – News Anchor Howard Beale in the 1976 film, Network

Human rights, inalienable rights, constitutional rights… what the hell does it all mean anymore? Intrusive nanny state laws have government big brothering us to death as George Orwell laughs from the great beyond, “Bwahahaha… I told you so.”

Smoker’s rights? Seriously, what the hell is that?

If you’re reading this Cigar Advisor article, I would have to assume that you, much like I, are a fan of the hand rolled tobacco happy stick. Make no mistake about it, I love smoking cigars and they truly are an important part of my lifestyle. Firing up a mellow golden Ashton Classic during an early day car ride or a Perdomo 20th Anniversary Maduro after a nice, hearty dinner is always a deserved reward for another day well lived.  But whether you’re an ardent lover of leafiness or a casual smoker during poker or golf, you enjoy this time-honored, hand-crafted product created for adults that is indeed 100% legal to partake in.

Reality check: The cigar industry is under attack, make no mistake about that, people. The pastime and lifestyle that so many of us love and live for is in for the fight of its life. Cigar legislation and anti-smoking laws are out of control and even places like parks and golf courses where there are billions of square feet of open air are off limits. New York’s Times Square sees over 300,000 toxin spewing cars, trucks and busses pass through its vicinity every day, yet it’s a $50 fine if you’re caught lighting up your Montecristo Relentless. The inmates are indeed running the asylum.

And of course taxation of tobacco products is skyrocketing with a major kick in the pants delivered in 2009 when our then newly elected president signed the S-CHIP bill, making cigars and other tobacco products the scapegoat for funding. Then came nothing short of a death threat back in April of 2014 as the FDA announced quite emphatically that they wanted to regulate the cigar industry. Yikes. The atrocities they’ve proposed are too many to name, but mark my words, the worst case scenario is the demise of an industry that employees upward of 35,000 people here in the United States and over 300,000 people in Latin America.

It is human nature – no one likes having anything taken away from them. And no cigar lover wants the FDA to take away our precious sticks or make the cigar industry a thing of the past. Can you imagine 100 years from now, our citizens reading American history books and saying, “What? People were allowed to smoke back then?!”

Can I please take a moment here to repeat myself that cigars are indeed a LEGAL product? Thanks again for recognizing that.

You know what, guys, I just want to smoke the Romeos, the Camachos and the Liga Privadas I love and be left the hell alone from bureaucratic buttinskies who somehow feel it’s under their authority to save us from ourselves. I’m a big boy, a conscious thinking, decision making adult who understands that there are inherent risks in some of the choices I make. If I want to spark up a Gran Habano Corojo #5, pour a belt of my favorite whisky and toss a big old cow carcass onto a flaming grill, it’s my damned choice. There’s a whole lot more serious crap these self-righteous governmental goons need to deal with instead of denying my right to legalized pleasure.

Say, do I sound pissed off? Well, hell yeah, and you should be, too. While I’m not going to freak the hell out like Howard Beale, and I’m not calling for unlawful disobedience, I am going to use my voice on the web and through social media to make people aware that this kind of cigar legislation is WAY beyond smoking. Our freedoms are under siege and remaining quiet and passive will only send our rights careening over a cliff à la Thelma and Louise. Are you on Facebook, Twitter, Periscope, YouTube or Instagram? Good…use your voice to let people know that this isn’t only about cigar smoking, it’s about the erosion of our liberties and if we let the law makers take, then they will continue to take and take and take and take until we’re all lining up in ten degree weather in front of a cement plant, waiting for half a roll of toilet paper.

Wait a minute… did I just hear some possible good news?

You know the good people at Cigar Rights of America, the lobbyist group created to protect cigar smokers’ rights; well, their tireless efforts are beginning to take effect in a positive way. The House Appropriations Committee has adopted the recommendations of their Agricultural subcommittee that they will NOT fund the FDA in their attempts to regulate the cigar industry. Sounds like we finally got some uplifting news in this ongoing fight and I talked to the CRA’s executive director, Glynn Loope about it.“The Appropriations Committee could not ignore the number of co-sponsors that Cigar Rights of America has signed on in support of the cigar industry,” says Loope. (There are 163 in Congress and 21 in the Senate to date). “They are recognizing that premium hand rolled cigars are indeed different than other forms of tobacco and should therefore not be treated in the same manner.”

“The language in the 2009 Tobacco Control Act talks of cigarettes and smokeless tobacco but NEVER once mentions cigars,” exclaims Loope. “Congress never intended cigars to be a part of it. Again, the Appropriations Committee agrees that premium cigars do not have the same health issues, addiction issues and access issues for children that the other forms of tobacco do.”

And now, even some more good news comes as it was voted on to change the predicate date of any regulations brought about by the FDA. Originally it was to be that any cigars created after 2007 would be subject to regulation, a devastating move that many say could put more than half of the industry out of business. But Representative Tom Cole, R – Oklahoma was successful with the introduction of a much needed amendment that changes that date to whenever the FDA actually makes a ruling, grandfathering the entire premium industry as it stands today. (Note that a lot of the credit for the date change not only goes to the CRA, but to the Cigar Association of America, IPCPR, National Association of Tobacco Outlets and others.)

While the CRA is happy that their efforts are showing some positive effects, Glynn does admit we’ve still got an uphill fight on our hands in protecting not only the rights of individuals, but the cigar industry itself.

“Cigar Rights of America will continue to work with congress and the senate to protect the industry and cigar smoker’s rights,” Loope states. “We’ve still got a ways to go and we need the people to continue to stand up for their liberties as we continue to fight for the lifestyle we love.”

Yes, guys, it’s going to be a continued fight against high taxes, draconian smoking laws and nanny-state self-appointed do-gooders, but we’ve got to continue to be vocal and stand up for what we know is right.

I think we’re all mad as hell at over-controlling government officials, but we’re also grateful as all hell to the ones who support us. It is my opinion that tobacco rights is a final stronghold, because if that becomes snuffed out, everything else like our favorite spirits, desserts, meats, etc., will become the next victims – and I certainly do not wish to be referred to as comrade.

I sure as hell don’t need to be saved from myself… do you? Let’s agree that we are NOT going to take this anymore.

Visit www.cigarrights.org to stay on top of what’s going on with cigar legislation and to find out what you can do as well.

There sure has been some shitty developments since this article was published not too long ago.