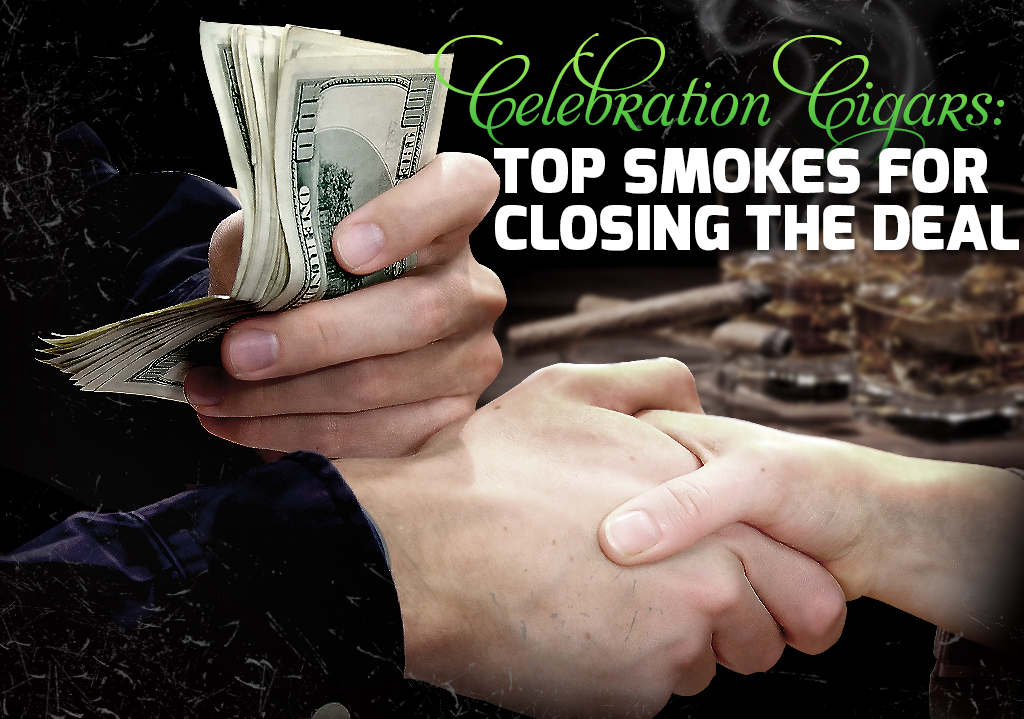 Report: The Best Smokes for Closing the Deal, and Other Cigars for Special Occasions

Why do we break out the cigars for special occasions like a new baby, wedding days, milestone anniversaries & birthdays, a job promotion, or a raise?

It’s a cultural thing. Besides, enjoying a fine cigar just makes the moment that much better, which brings us to the “victory cigar.” This is a cigar you would smoke after closing a big business deal, negotiating a company merger, acquisition, or landing a big account. Even sports teams light-up after winning a championship game. The victory, or the “closing the deal” cigar also calls for more than just any good handmade premium; it calls for an extraordinary cigar.

Deal-closing cigars are usually luxury class smokes that are big in size, like a Churchill, Toro, or a Torpedo. They should be full-flavored, well-balanced, and made with superb construction. Do they have to be expensive? Not necessarily, but you shouldn’t shy away from paying more to celebrate a deal that’s just added another 10% in profit to the company’s bottom line. Chances are you’ll be getting a generous bonus, which should be reason enough to celebrate with a La Aurora Preferido Maduro #1, a 6″ x 58 double perfecto that lists for about $18.00. Whatever you do, don’t buy cheap cigars.

If you’re an avid cigar smoker, chances are you already have a number of luxury primos in your humidor that you’ve been saving for just such occasions. Some of the best cigars that come to mind are the 6″ x 54 Zino Platinum Z-Class 654T, a figurado that epitomizes the term “luxury cigar;” the 6½” x 50 Arturo Fuente Don Carlos Presidente, which I consider the original Fuente Fuente OpusX;  or the 7″ x 50 Alec Bradley Prensado Churchill, which, in 2011 took the #1 spot in “Top 25 Cigars of the Year.”

Once upon a time, someone wrote to me with the following question: “I just got divorced. What cigar would you suggest I smoke to celebrate?”  That one threw me for a loop, but assuming the writer was serious, I suppose it would depend on how much stress he went through before he and “Madame EX” finally signed the divorce papers. Technically speaking, you could say the fellow closed the deal, so maybe his new single status would be best served by choosing something like a Montecristo #2, one of the world’s most treasured cigars in both the Cuban and Dominican-made versions.

Among the most impressive deal closer cigars I’ve discovered in recent years is the 6½” x 52 Rocky Patel 15th Anniversary Toro. True, Rocky makes a lot of great cigars, but this earthy, sweet and complex beauty is so perfectly proportioned it’s comparable to driving an Aston Martin DB9 Volante. (It’s also one of Rocky’s personal favorites.)

You can also go with an obvious choice. Say you’ve just paid-off your company’s business loan. Now, there’s a deal closer if there ever was one. But before you book that celebratory vacation to Tuscany, you can commemorate the moment with an Arbitrage from the H. Upmann Banker selection. Better yet, share one with the president of the bank.

Boutique cigars are also a great way to celebrate that big deal. For one, many of them are made in small batches, so their limited availability makes them even more appealing. Take the Aging Room Quattro F55 Vibrato, for instance. This 6″ x 54 Toro is reasonably priced and delivers plenty of gusto due to its potent Dominican core box-pressed in one of the finest, extra-long aged Sumatra wrappers that will never be duplicated, making it an ever rarer treat.

Another boutique worthy of the “cigars for special occasions” tag is the Liga Privada Unico Serie L40. This attractive 7″ x 40 cigar not only looks like the kind of cigar a millionaire would smoke, but it’s so limited in production, it’s hard to find it in stock, especially if you buy cigars online.

If you’ve developed a palate for the best Nicaraguan puros, you can’t miss with the wide-ringed, 7″ x 56 Perdomo 20th Anniversary Sun Grown Churchill. After 6 years of fermentation, the wrappers are aged an additional 14 months in oak bourbon barrels, resulting in an ultra-smooth, full-flavored, and complex smoke that any captain of industry would be proud to have at-the-ready in his humidor.

There’s also the 6″ x 56 Oliva Serie V Maduro Especiale 2011 Edición Europa Torpedo. Oliva’s known for their stunning quality and rich Nicaraguan flavor, but until recently, this rare bird was only available in Europe. Not only does it reek of elegance, but the flawless, Mexican San Andres Maduro wrapper offers an incomparable flavor and aroma that takes celebration to mind-boggling new heights of pleasure.

Whether you smoke any of the aforementioned deal-closing cigars for celebrating, or simply for the sheer enjoyment of experiencing something truly extraordinary, life’s too short to procrastinate when it comes to partaking of the very best.  You can reap the rewards now or later, but one day you’re going have a reason to celebrate, even if it’s the day when you finally retire, so be prepared!

Reading Time: 6 minutes Camping, like most outdoor activities, is made better with cigars. No matter how much space you do or don’t have to spare, we’ve got nine cigars in a variety of strengths to make your time in the great outdoors even better!