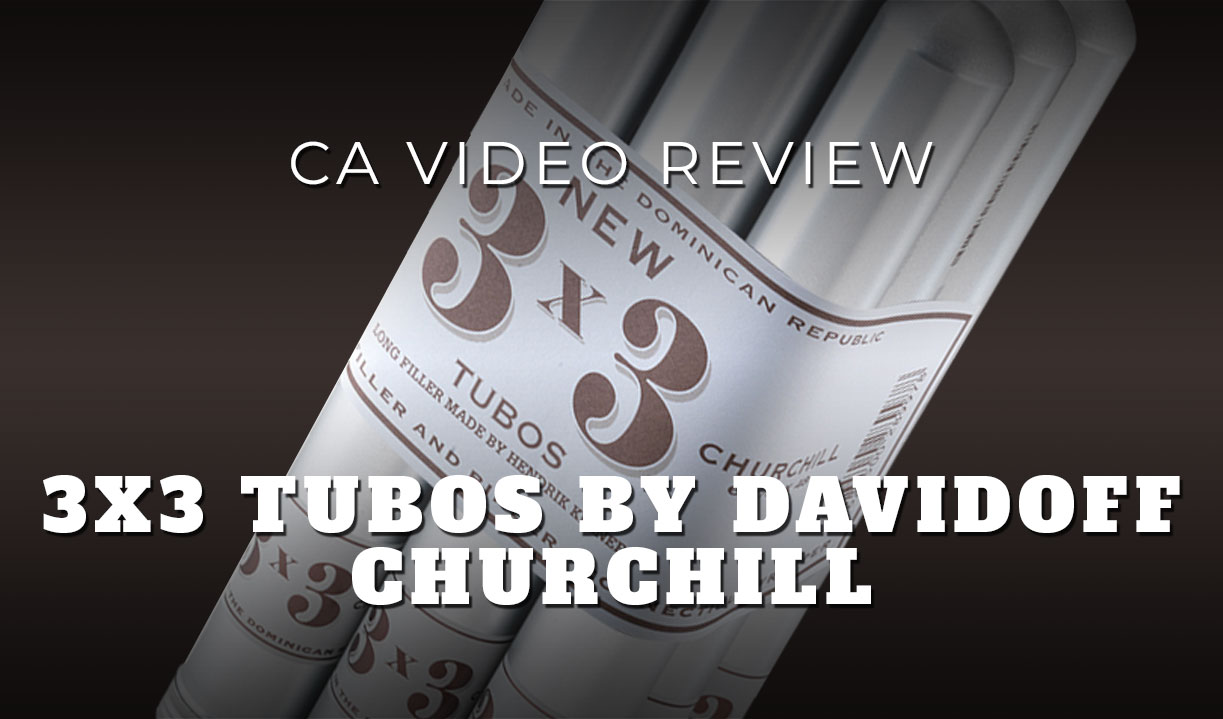 3×3 Tubos by Davidoff Cigars – The Back Story

Imagine someone telling you that you could have a premium, long-filler cigar from one of the industry’s top cigar brands for under $3. Now imagine that being a reality – because it is.

3×3 get their name from their packaging format. They are shipped in bundles of nine: three rows of three cigars. They don’t have fancy bands, or any bands for that matter. If we’re talking about optics, they’d be best described as nondescript or even plain. The most important piece of the 3×3 story, however, is where they’re made, and by whom. 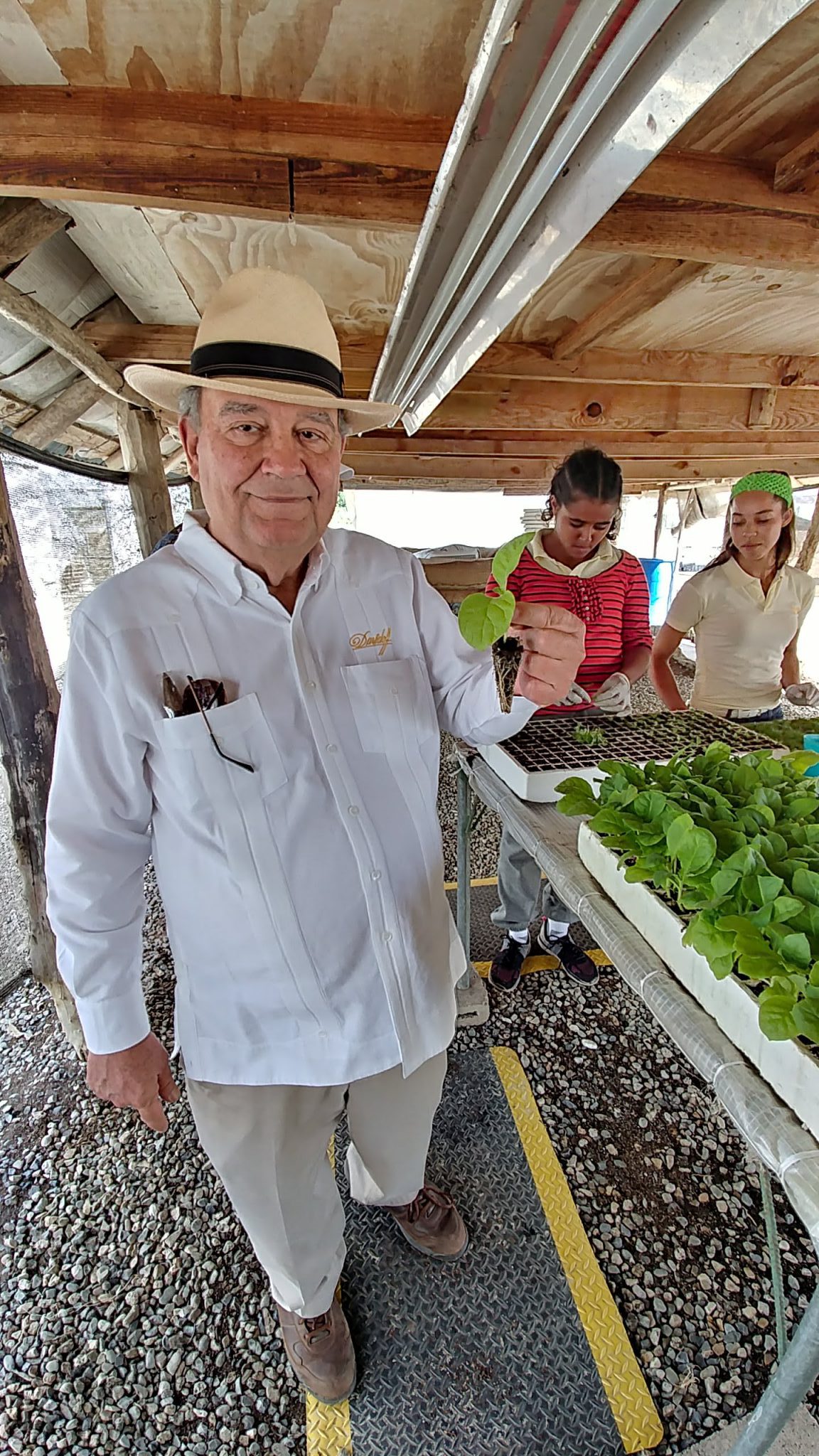 And that would be in Santiago, Dominican Republic, by none other than Hendrik “Henke” Kelner. If you don’t know the name, he’s the brains behind Davidoff and Avo, two of the most lauded cigar brands of all time. That factory in the DR, you may have guessed by now, is Davidoff’s factory. 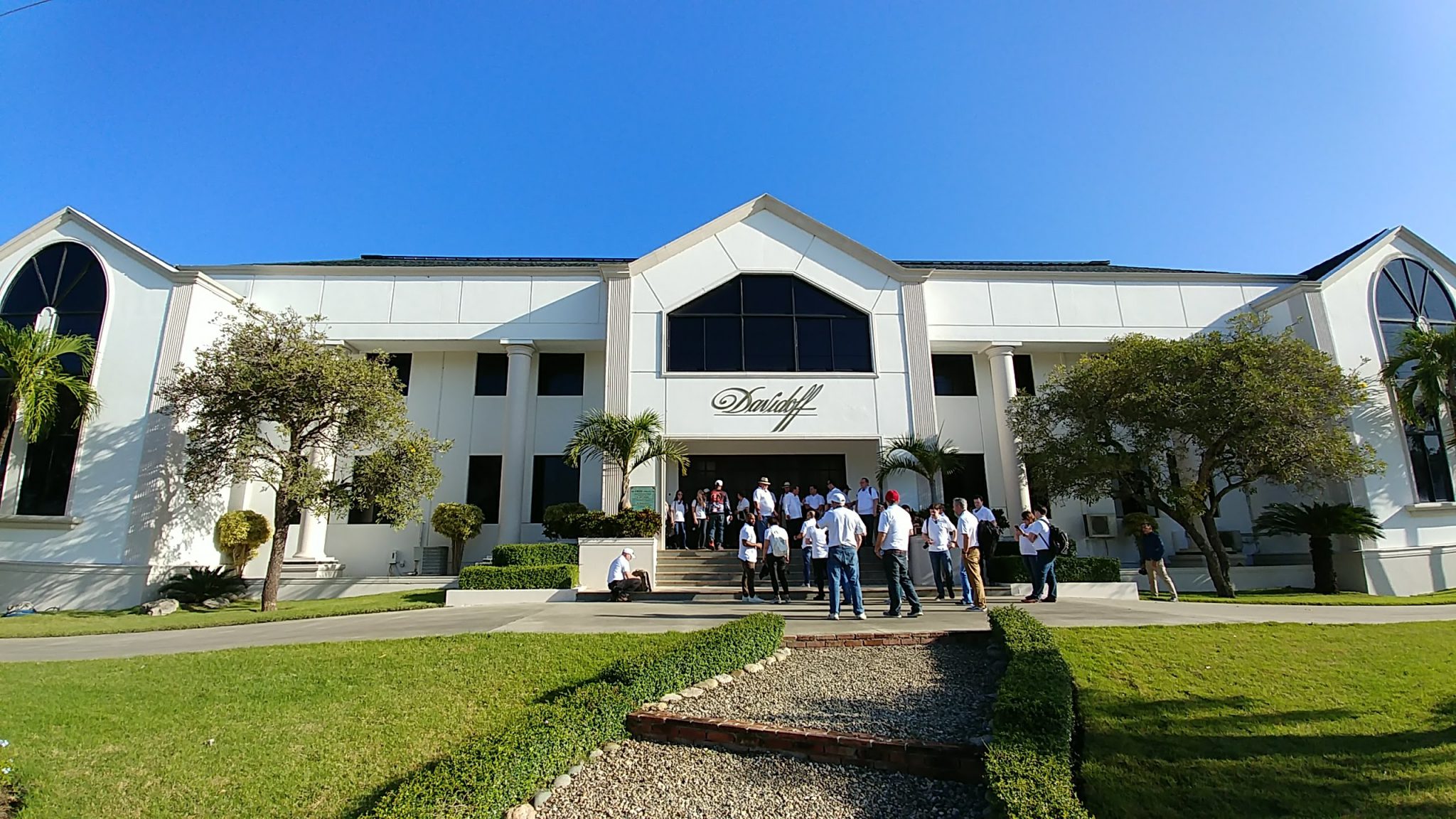 Most of the cigars we test drive for our Panel Reviews have history, some with compelling stories of how they came to be. 3×3’s background may not be sensational, but its price point is. A sub $3 Davidoff is a story in and of itself. The question is, will it stand up to the scrutiny of what we’d expect from such a high brow cigar company? That’s what we’re here to find out.

Davidoff’s 3×3 cigars are presented in the following sizes:

Given the times, we thought it would be good to highlight something more budget-friendly this time around. And believe it or not, it comes from…Davidoff. Not exactly the model for thriftiness.

The first few puffs have that typical Connecticut dry/bitter sensation, mixed with wood and some pepper. The bitterness fades by the 1/2″ mark, and its Dominican-ness is really starting to come through: wood, toast and a hint of something sweet. Strength barely registers – but the smoke from the 3×3 does have a little bit of body to it, landing heavier on the palate while draping some pepper across the top of my tongue.

We always talk about pairing cigars and whiskey, bourbon, beer, rum…But this 3×3 smokes spectacularly with coffee – actually, it burns long enough for a second cup, about an hour and 15 minutes. 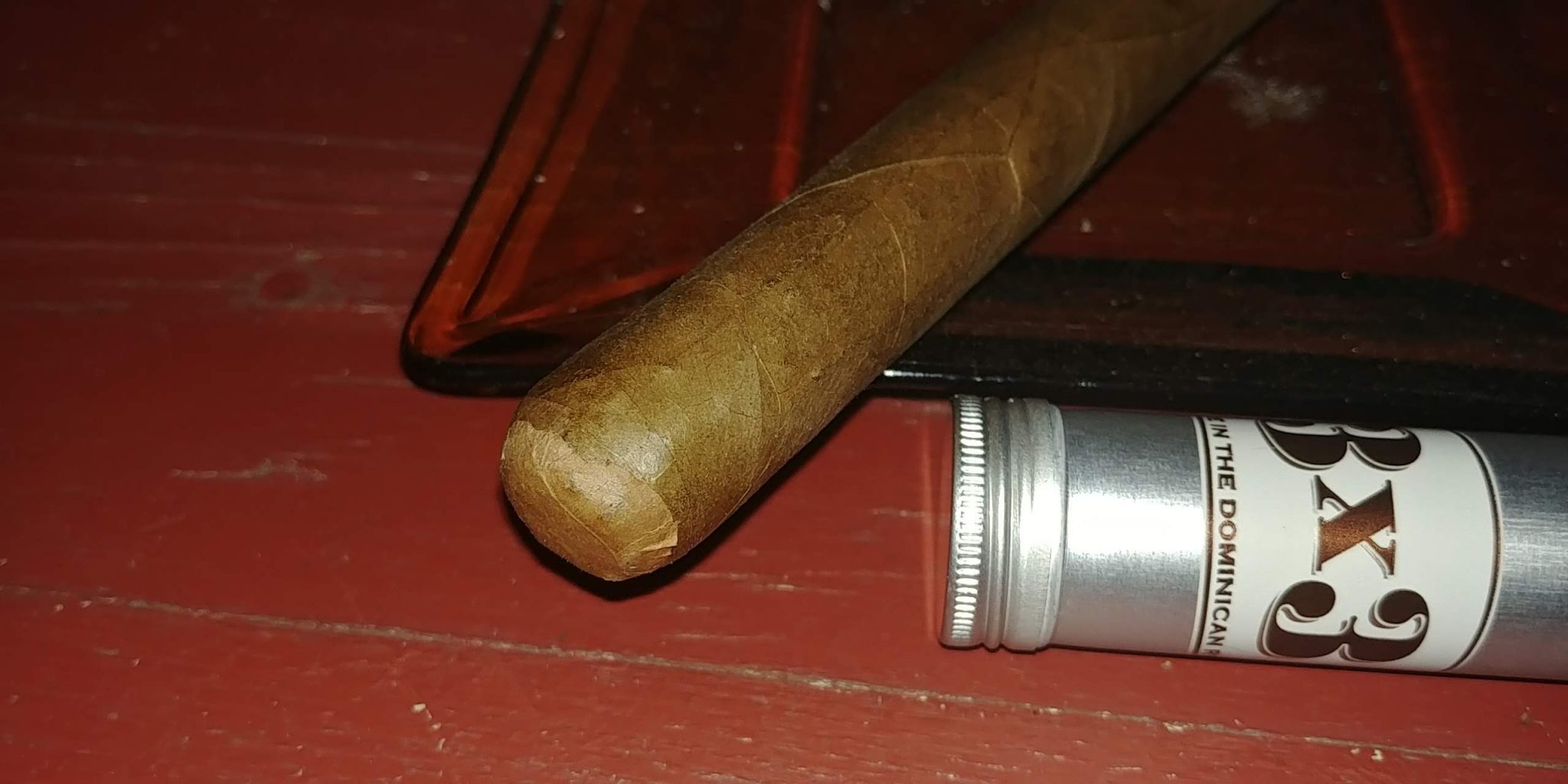 Now about the Davidoff connection…when you hear the name, it’s easy to set expectations high. But don’t get hung up on the pedigree: while it’s plenty good and well made – and I like it – this is still a budget cigar (there is no cedar sleeve inside the tube, for instance). So, the 3×3 isn’t going to give you the same Davidoff “experience” as the $25 cigars that come from the same building. But Davidoff’s attempt at a bundle cigar performs above average for a mild, money-minded everyday burner. If you’re looking for a nice and affordable alternative to Macanudo Cafe, Don Diego or maybe Gispert…or better yet, if you ever wished you could have Baccarat, but without the sweet tip – throw a wad of these in your golf bag.

I called Davidoff’s 3×3 “a mellow champ” – it’s a very straightforward profile of toast and wood, but actually gets a little sizzle now and again when you smoke it slow. A good smoke at a sensible price; that makes the 3×3 a smart buy at times like these.

Construction: Impressive. The wrappers on both of my samples were a little soiled in appearance, but the cigars were well-packed and affixed with a well-fashioned cap. Unfortunately, there’s no band, which erases Davidoff’s familiar cachet, but knowing they’re made in the Davidoff factory will probably be more than enough for most.
Draw (airflow): Excellent.
Pre-light flavor (cold draw): Woody, grassy, mushroomy.
Toasting & Light: Grassy and cedary with a splash of sweet tobacco.
Base flavors: Hay, cedar, sweet tobacco, bitter fruit.
Retrohale: Smooth and woody.
Aroma: Sweet.
Burn & Ash Quality: Excellent.
Balance of flavors: Very good. Consistency of the base flavors was impressive.

Let’s start with the obvious. The 3X3 Tubos, in any size, are a PRIME value, especially right now, when getting the most for your money is high priority. This begs the question: How often do you get the chance to smoke a Davidoff-made cigar for around three bucks? I wish they had gone for bands on these, if only to make them a little more recognizable after they’re slipped from their tubes, but I’m not going to belabor it.

Performance-wise, the cigar offered a great draw, nice mellow flavors, excellent consistency. Though it’s far from complex, my Churchill offered the occasional surprise, like a tanginess just past the midpoint that I can only compare to being fruity. There was also a sneaky peppery element that surfaced occasionally. The base note were mostly cedar and sweet tobacco with a little bitterness at times, especially in the final third. Yet, even during the nub stage it was still pretty tasty. 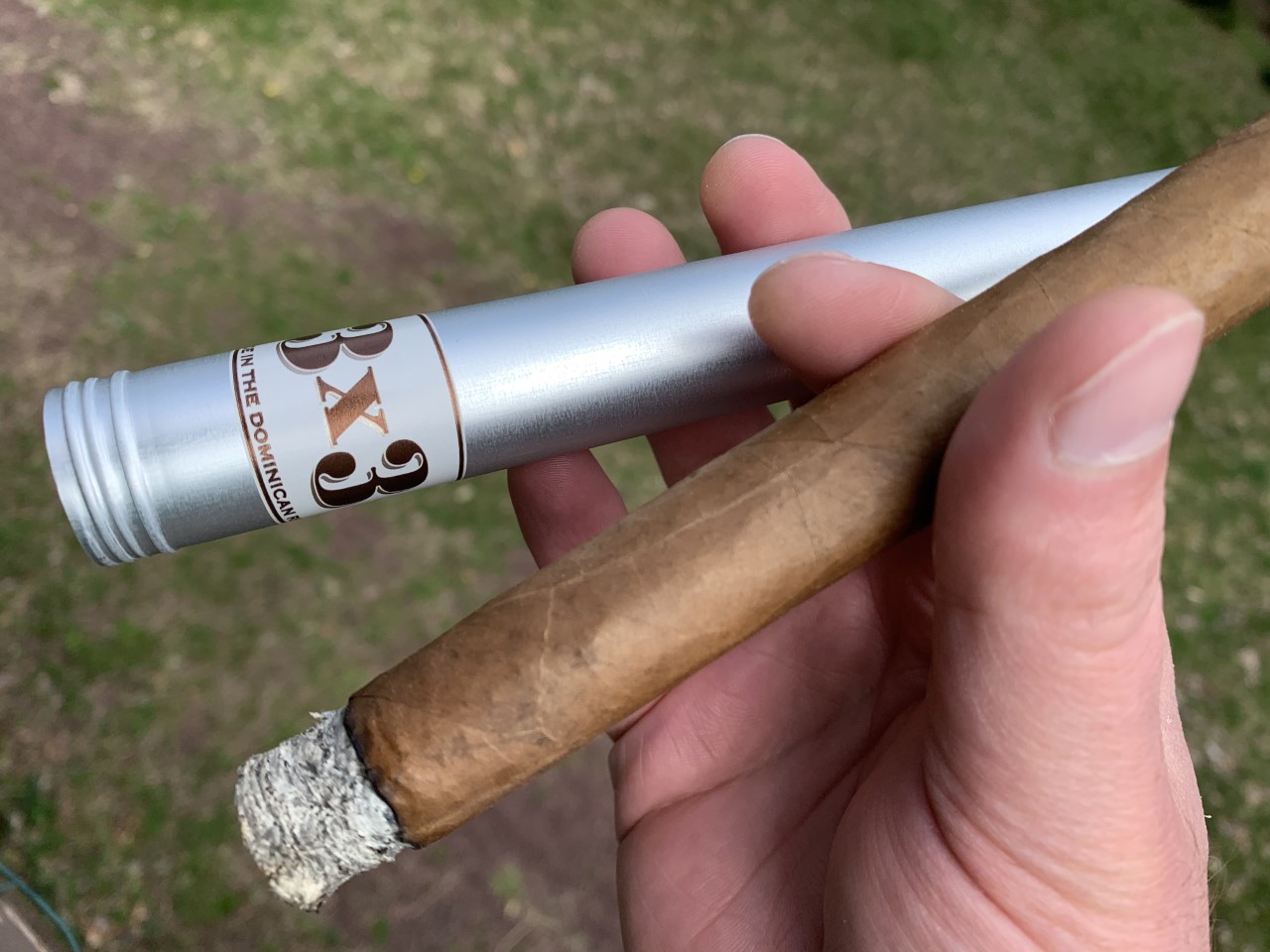 As I mentioned in the video, the 3X3 is ideal for the newly initiated. It’s affordable enough for those just getting into cigars, while offering better than average quality and flavor—at least as Dominican blends go. They’re also good to keep around as a lighter alternative and boy do they make a good morning cigar with coffee.

Suffice it to say. . . for those times when you want to relax with a good cigar, but can’t decide what you really want to smoke, the 3X3 Tubos by Davidoff Churchill is way better than just any port in a storm.

Construction: Beautiful golden-brown color, well rolled, with one or two soft spots.
Draw: Open.
Pre-light flavor: Kind of like fig cookies. Really sweet.
Toasting & Light: Lots of wood.
Base flavors: Sweet wood, cedar, plain cookies. And some grassy/leathery notes on the finish.
Retrohale: Mostly smooth with some gentler spices later on. Aroma: Sweet, almost a cedar note to it.
Burn & Ash Quality: Excellent concrete-colored ash. Stays put. Burns straight to a nice cone throughout.
Balance of flavors: A bit linear and on the woodier side.

3×3 starts off with a heavy emphasis on sweet wood. It’s mellow, maybe with slightly more body than something like a Macanudo Café. Before I was halfway through (about two inches on my first, and three on my second sample), the cigar turned sweeter. If you noticed a trend here, you’re right. It’s sweet. Very sweet. At this point, the retrohale also gets a little spicy. And I stress little. It’s just a nice boost of flavor. Does it stand up to Davidoff’s standards, what you should expect from their cigars? 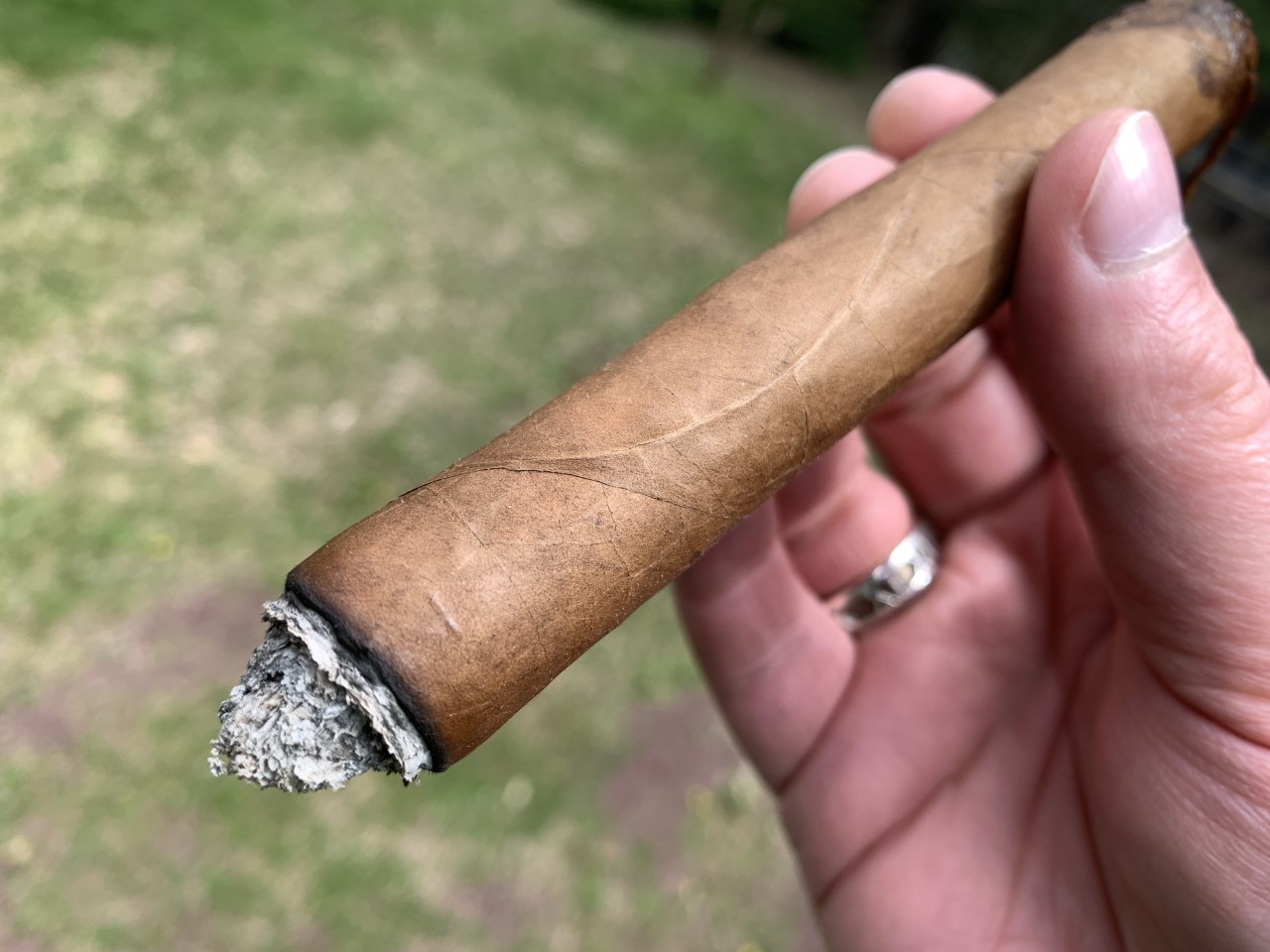 If you’re basing it on their top shelf selections, no, not really. But then again, even with this being a Davidoff, I don’t think it was meant to be a stand in for those blends. If it were, everyone would just buy these instead.

Instead, what 3×3 does well, is give a good flavor for the money experience. And asking more of it would be a little bit ridiculous…if you ask me. At their price, these cigars offer more flavor than most of their contemporaries –“above average” as Pullo said in the video – and that alone is more than enough reason to pick up a bundle.

Without getting into all the little talk my thoughts about this stick were as follows.
It keeps it’s fire very well but I’m afraid that is about the only positive I have for this stick oh wait it does hold its ash well.
Now don’t get me wrong there are many Davidoff and AVO’s that I love just can’t afford so that is why I tried these 3×3’s but I was very very disappointed in this smoke. I have smoked cigars for many many years so this is not a newbie review but one from what I hope is a wide love of many different smokes from all over.

I don’t get the thought process in making an affordable Davidoff… with no band… and then putting it into a tube… you want affordable… forget the non-smoke-able fluff… Never really been a fan of Davidoff.. WAYYYY to expensive for my wallet. And there’s too many great affordable vitola’s out there.

The churchill is good, the corona is very good. 3 out of 4 bundles of robustos were unsmokable, with a terrible aluminum taste.

Sorry you had such a bad experience with the Robustos. Have you thought about telling that directly to Davidoff? Maybe they’ll start adding cedar liners to the tubes.

Reading Time: 2 minutes The Advisors’ WFH video series returns with more answers to your cigar questions about smoking outside, taking off your cigar band, and torch flame vs soft flame. Watch now!