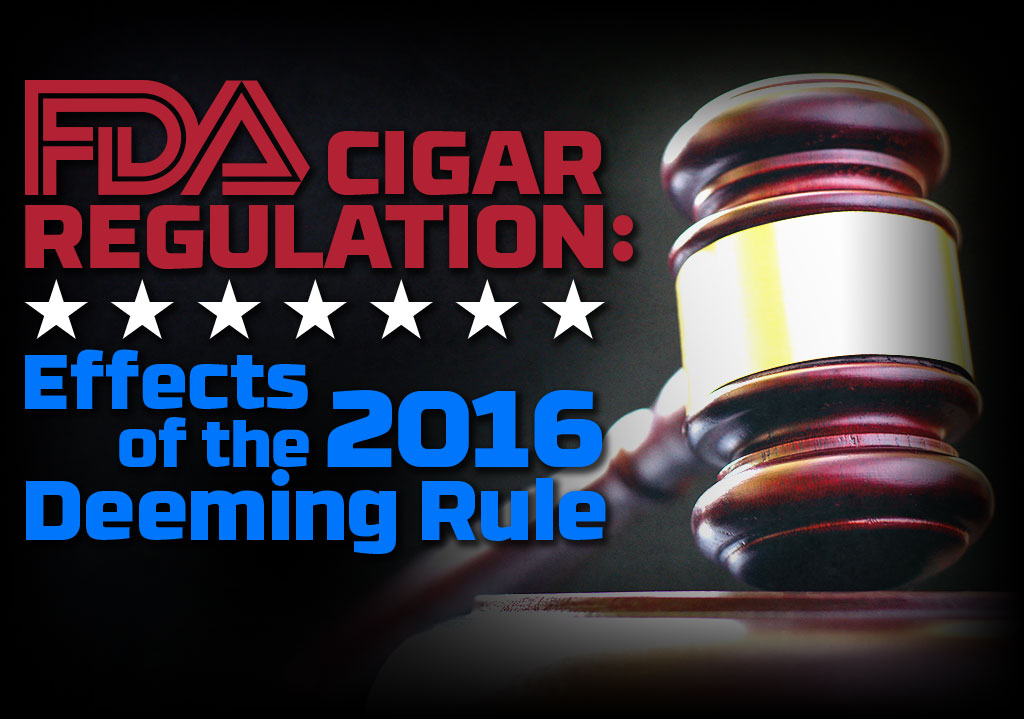 Wondering How it Will Affect You?

The Food & Drug Administration issued its deeming rule regarding the tough new regulations on the U.S. cigar industry last week – and it’s about to get written into the federal record.

There’s a lot to unpack in this 499-page document; many of the principals in the industry, along with their lawyers, are poring over it in order to respond in a way that best positions the industry to remain as unaffected by these new burdens as possible. What’s important to realize is that if this shift in FDA cigar regulation is left unchallenged, the rules will take effect in 90 days – on August 8, 2016.

The Advisors have learned some interesting information, and want to share the important takeaways we feel you need to know.

The Food & Drug Administration has selected Option 1 in its intent to regulate premium cigars.

Essentially, this means that of the two options that were presented by the FDA to the Office of Management and Budget for enforcement and impact cost estimates (and for a period of public comment), the first option was selected – giving the FDA the authority to regulate premium cigars under the Family Smoking Prevention and Tobacco Control Act (FSPTCA), the same way the Agency currently regulates cigarettes, cigarette tobacco, etc. This now extends their authority over any other tobacco products that the FDA by regulation deems to be subject to the law. The exemption for premium cigars we’ve discussed here before, despite our hopes, is out.

The ruling establishes a predicate date of February 15, 2007 for products to be verified by the FDA.

There is a lot of gray area here – so here’s an easier breakdown.

There’s an interesting discussion of the legislation and the why’s of the predicate date here at Cigar Coop’s website. What’s unclear: it would be logical to expect that the FDA would still want to test the grandfathered brands; how that would be done has not been specified. Neither has the inner workings of the testing process, including (a) the actual cost to the manufacturer for submitting his or her product; (b) how long the testing process will take; (c) what steps constitute the testing process; (d) whether a manufacturer has recourse to appeal or be exempted from the FDA testing process; and (e) what happens to a product’s ability to be marketed and sold if the testing process takes longer than a year. Additional questions are raised when we look at the standards dictated in the “equivalence” – what are the baseline metrics or benchmarks against which the affected cigars are being tested, and who selects them? That hasn’t been clearly defined either. As to what constitutes a product that’s to be tested, it’s still unclear to us if we’re talking about a cigar brand, a blend, or each individual size/shape available in a line.

That last part is what carries the most significant business impact to the cigar makers. As the costs for substantial equivalence testing are (as yet) undefined, manufacturers are having to juggle different strategies in determining which of their brands they’ll submit to the FDA and which they’ll be forced to discontinue – a difficult decision for the smaller companies who don’t have as many of the resources as the larger manufacturers, and why you might have seen some of the strong words about these guys “being forced out of business.” As for Cuban cigars, their future in America seems more cloudy, even as the doors to diplomacy are slowly being pried open. They haven’t been available for sale in the U.S. since 1961 – and no one is sure if the Cubans or their distributors have the resources to submit their cigars for FDA testing, or even would be willing to do so.

Free cigar samples will be banned.

This is something that will have a direct impact on in-store events, where “the first 100 people get a free _____.” Manufacturers will be prohibited from distributing samples and handouts at their events; how this affects cigars distributed through coupons/gifts with purchase or through ticketed events is unclear, as it can be reasonably argued that a free cigar isn’t really free, if you have to purchase something else to get it.

The FDA ruling establishes a federally mandated minimum of 18 years of age to purchase any tobacco product. This includes online sales, and age verification by photo ID.

You might be thinking, “I thought this was already in place?” Indeed, for cigars the minimum purchase age has been 18 for quite a while; some cigar shops don’t even allow minors on the premises. But this is one of the primary reasons for the FDA’s strong response, and one that’s been strongly advocated by anti-tobacco groups lobbying the federal government: keep cigars out of the hands of kids. Something that hasn’t been an issue, thanks to existing laws and effective (and aggressive) regulation in accordance with retailers nationwide.

At just a top-level glance, you can see there is a lot to the just-announced FDA cigar regulation that is lacking not only in terms of justifiable reasoning and research, but in the number of “untolds” in the document. These are the numbers, processes, costs and more that the Agency hasn’t defined yet…perhaps, because it can’t. That uncertainty has caused some to hit the panic button and cut YouTube videos professing the death of the cigar industry.

Reacting out of fear or anger often results in a rash, uninformed response – and that is a weakness our industry can’t afford.

Make no mistake, this threat is very real; but history has taught us a few things. If you remember, SCHIP became law in 2009 – bringing with it an excise tax that was capped at .41 per cigar. The dust has since settled; but considering the initial regulation had called for a $10 cap, it was through effective preparation and strategy that the industry found a way to adapt. Now think about this sweeping change to FDA cigar regulation, and about those who are affected by it the most. This rule has been a very real prospect for over two years; to think that cigar manufacturers were surprised by this turn of events, and haven’t been prepared with some kind of action plan in response, underestimates their capabilities and their resolve. Many of the cigar makers in this business have generations of tobacco history in their family history. A family history that, if it went through Cuba, saw their fathers and grandfathers jailed, beaten and shot, with their livelihoods looted by Fidel Castro and his true believers. They were forced from their homes with nothing in their pockets, and rebuilt their businesses from scratch; don’t underestimate their willingness to figure out a way to do it again. And for those who maybe don’t have such a storied pedigree, like boutique cigar makers – they’ve built impressive businesses, and they’re not about to give them up that easily. And they all have one thing in common: premium cigar makers don’t target kids, and they don’t tolerate underage smoking.

Yes, the majority of the news reporting you’ve seen undoubtedly has been one-sided, with those determined to make this a “tobacco-free” America hailing the FDA’s moves. The silver lining is that there are legislative efforts under way to halt the FDA march toward regulating American tobacco out of business. But it’s important you tell your side of the story as well – these regulations, if left unchallenged, will have an impact on your ability to enjoy cigars. Sign the new petition, and make a difference.

We have to respond and we have to do it in a methodical manner. This legislation is hell bent on destroying the cigar industry as we know it.

The FDA regulations on cigars will help other countries to formulate their rules.
Thank you, the FDA.

Reading Time: 2 minutes Gary speaks to Pedro Ventura and Elmer Suarez: members of the famed Grupo de Maestros, they’re two of the driving forces behind storied cigar brands like Romeo, Trinidad, Monte and more. Get a rare glimpse into the creative process of cigar blending from the Masters!

How to Keep Your Cigars Safe from Humidor Mold