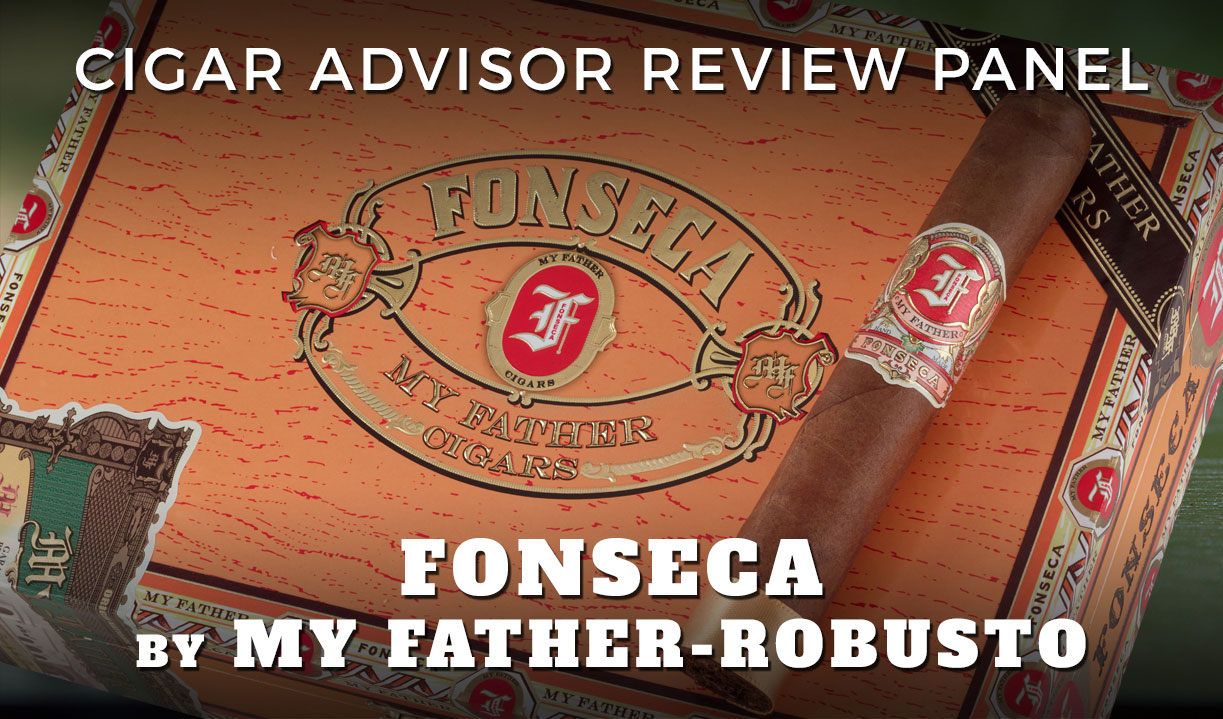 Fonseca by My Father Cigars – The Back Story

The history of Fonseca is a history of two cigar brands. First, the original brand that served in Quesada’s catalog for nearly 50 years. Fonseca was a household name, known for its high quality, excellent flavor and affordable pricing across the board.

It was in Spain during September 2019, Janny Garcia and Patricia Quesada (Manuel’s daughter) began talks of transferring ownership of the Fonseca brand to My Father of Flor de Las Antillas, Le Bijou 1922, and La Opulencia fame. The Garcia family has lauded publicly of what an honor it has been to give the brand a home in their family of cigars. Under My Father’s stewardship, Fonseca has undergone some minor aesthetic changes as well as a complete re-blend. My Father chose to re-imagine the Dominican classic with all-Nicaraguan tobaccos, including a Corojo 99 Rosado wrapper. Remaining is the iconic ‘F’ emblazoned on the band – an instantly-recognizable attribute that we can’t imagine any true Fonseca without. 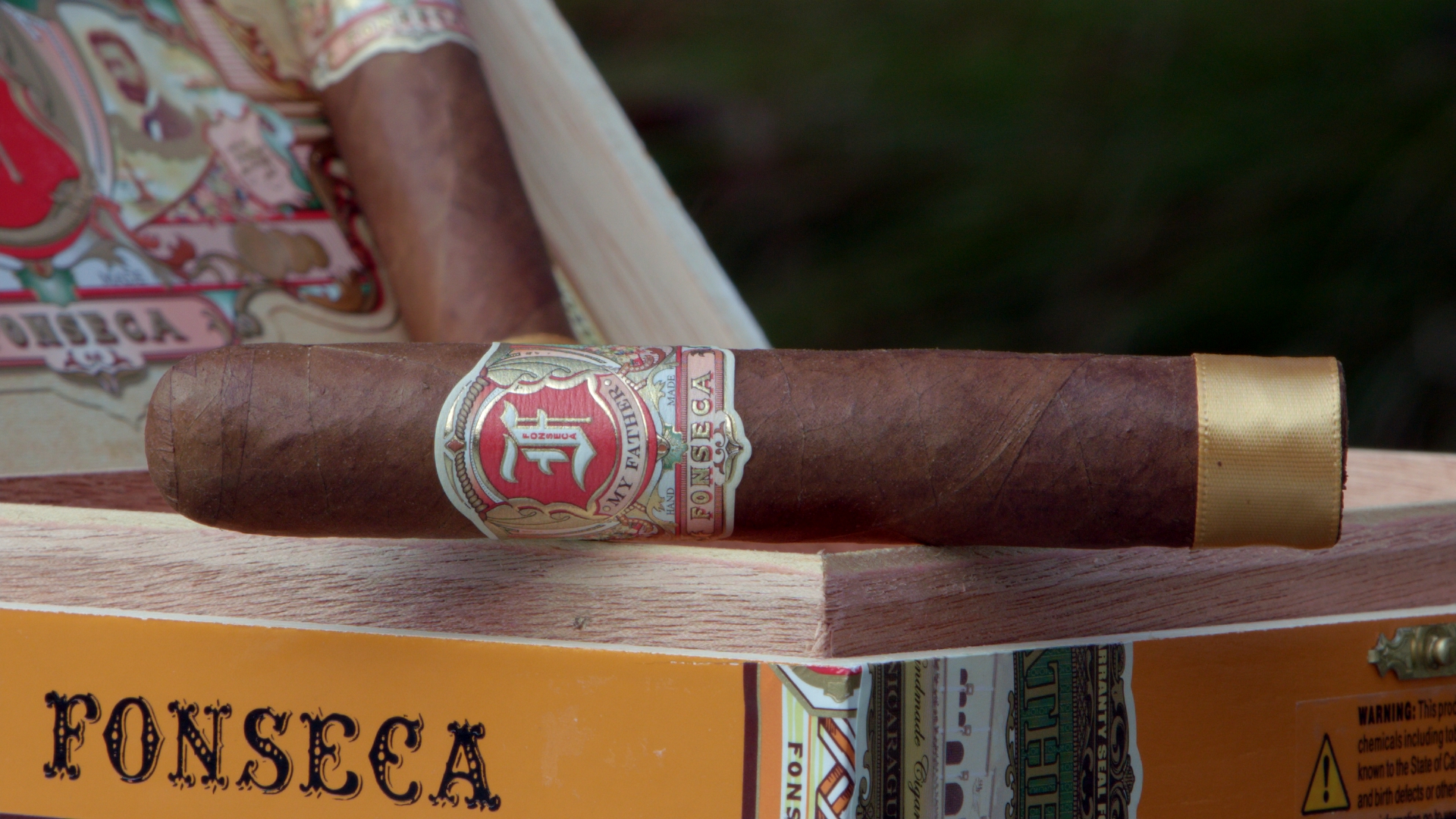 Noted as “rich with flavors of earth and spice,” Fonseca’s Nicaraguan tobaccos have been given a mellower treatment so that the new recipe stays true to the blend’s roots. The result is a medium-bodied profile that Fonseca fans have enjoyed for decades. Given that Quesada and My Father worked together in 2012 on Tres Reynas, it’s clear that Quesada’s relationship with the Garcia family blossomed into one of ultimate trust – carrying the torch of this Quesada staple to the next generation of cigar smokers. 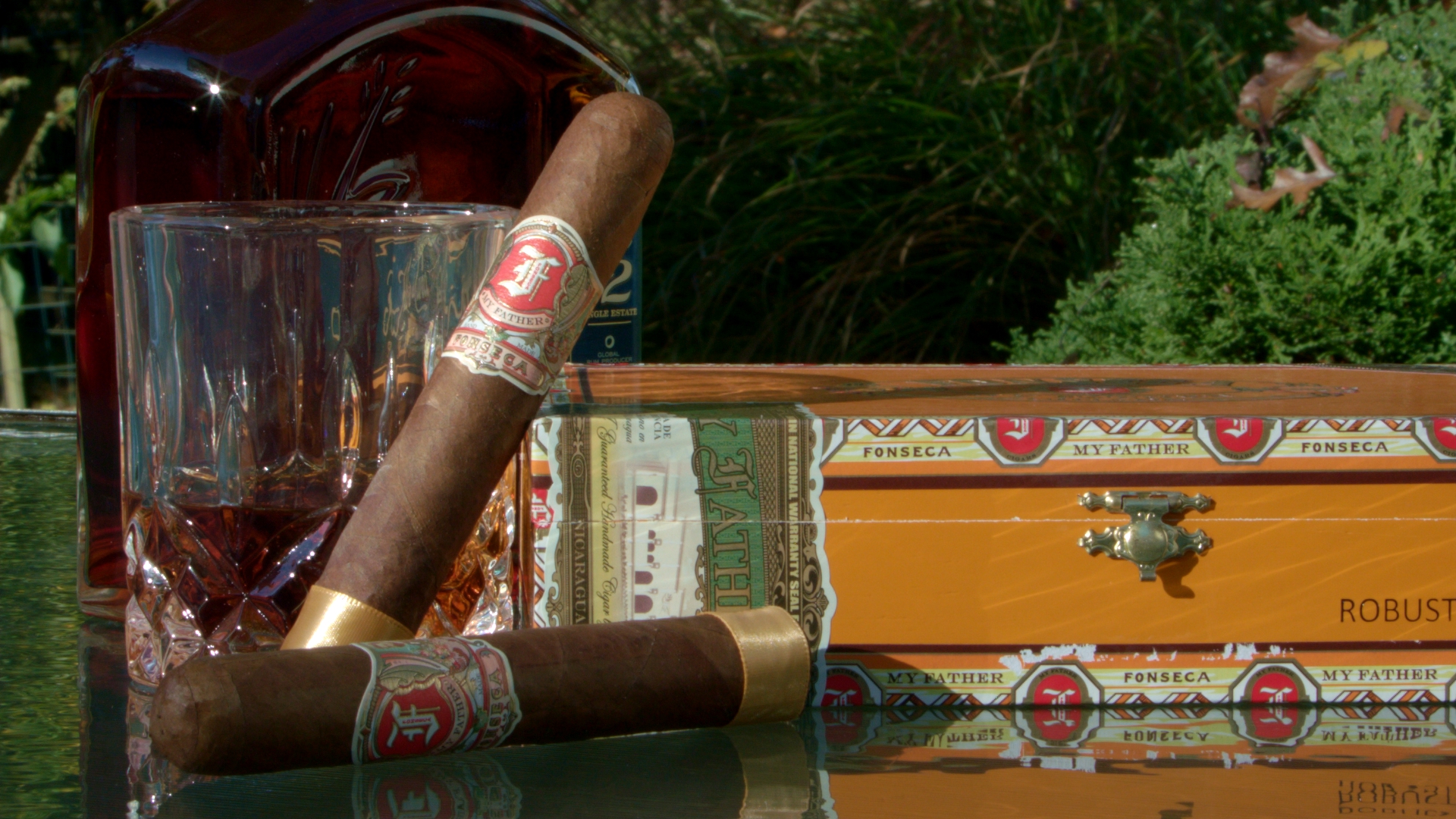 My Father Fonseca is presented in boxes of 20 across six sizes:

The Robusto size we’re reviewing is arguably one of the most popular and cost-effective. Please remember that we don’t assign letter or number ratings because we know that taste is ultimately subjective. Instead, we’ll be telling you who we think this resurrected Fonseca is for, while offering a preview of what flavors you can expect.  And if you’ve smoked My Father Fonseca, tell us what you thought about it in the comments below!

Construction: Tightly rolled, tightly packed; toffee colored wrapper has some tiny, tiny tooth if you look closely.
Draw: Nice, with a hint of resistance.
Pre-light flavor: An eyebrow-raising mix of dark spice and cocoa.
Toasting & Light: After a peppery start, sets a course for earth, spice and chocolate.
Base flavors: Cinnamon, leather, cedar and chocolate.
Retrohale: Nuts, wood and LOTS of spice.
Aroma: Floral.
Burn & Ash Quality: Burns even, though a little fast.

A peppery start (this is Pepin, remember) rounds out to a mix of spice, sweet, earth and wood. Plenty of Nicaraguan-ness, but this Fonseca seems a bit more approachable than some of the big name My Father cigars. Sturdy retrohale, though a pleasant aroma. 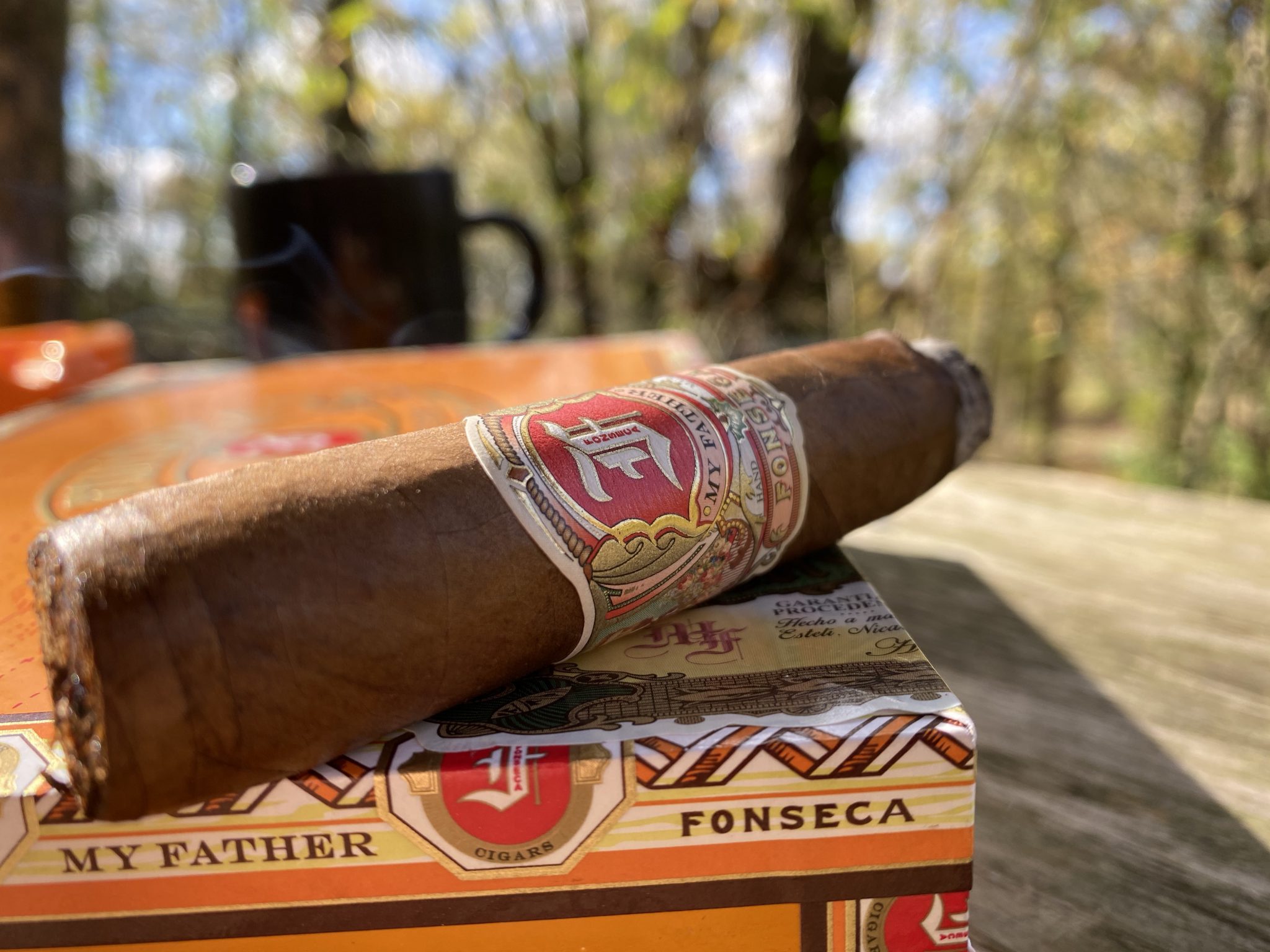 I bet the boys a Le Bijou that this My Father Fonseca ends up in the top 10 of Aficionado’s cigars of the year, and not just by virtue of taste. There’s quite a backstory here, too: the Quesada-My Father connection, the Cuban legacy of Fonseca, and My Father’s way of updating defunct and classic Cuban cigar brands. Add in all the talk and anticipation that’s surrounded this cigar since it was announced in 2019, and it would be hard to leave such a talked-about cigar off the list. Plus, it’s a pretty enjoyable smoke.

If you’re hoping it burns like the old Dominican Fonseca, you’re out of luck; this is decidedly a My Father kind of smoke. This Fonseca hits the taste buds with plenty of flavor, but doesn’t overdo it – and with medium body, subtle sweetness and fresh, interesting tastes, may be the ideal medium-bodied stick to prove that My Father isn’t out of your league.

Construction and Overall Appearance: Excellent. Nice looking wrapper. Cigar is perfectly packed. I like how the band’s red & gold colors stand-out against the wrapper, too. I’d call this a very respectfully done presentation that pays proper tribute to a historic Cuban brand.
Draw (airflow): Perfect.
Pre-light flavor (cold draw): A little nutty with a bit of molasses in the mix.
Toasting & Light: Nutty and woody with a little smack of molasses and cocoa. The cigar lit well and provided a fair amount of peppery spice to start.
Base Flavors: Roasted nuts, cedar, mocha, molasses, nutmeg, carnation (the flowery note).
Retrohale: Peppery, but not too overbearing.
Aroma: Sweet.
Burn / Ash Quality: Excellent. Ash is mostly grey with some black mixed in, and very firm.

Starting out with a peppery snap, the Fonseca by My Father Robusto rounds-out fairly quickly to a smooth, nutty, woody and pleasantly sweet smoke with a dead-center medium body. A floral note— carnation is the best I can conjure-up— emerges at the crossroads of the first and second third. The flavors remain toasty, well-balanced and impressively consistent in the midsection. 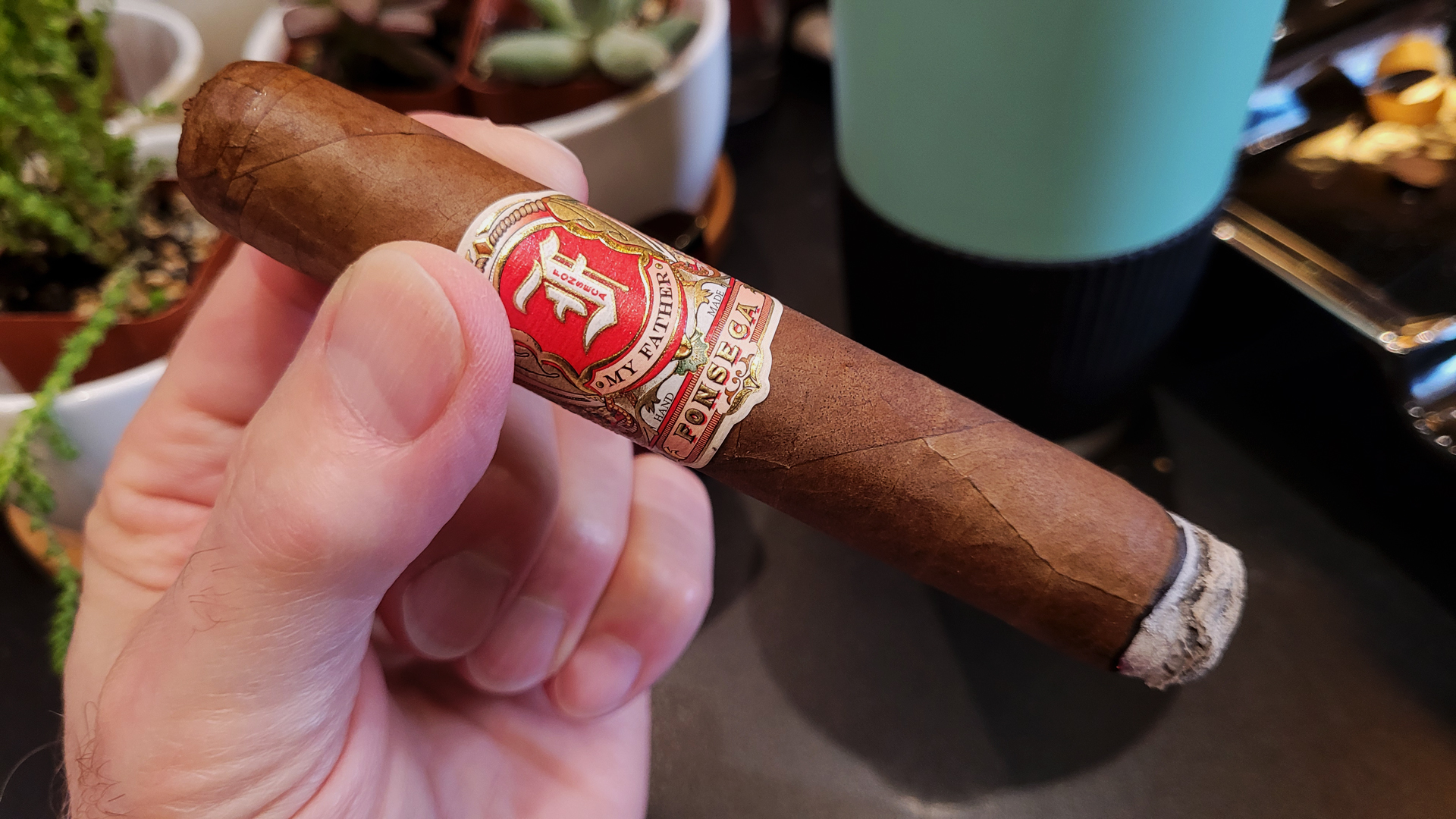 What we have here is smooth sailing on a steady course where each flavor is well-defined with the nutty, molasses, and nutmeg flavors staying closest to the top.

The final act follows suit in strength and flavor, but ramps-up slightly more in body. The floral aspect has faded, and even though the last inch revealed some bitterness, even with that I could still taste the core flavors. 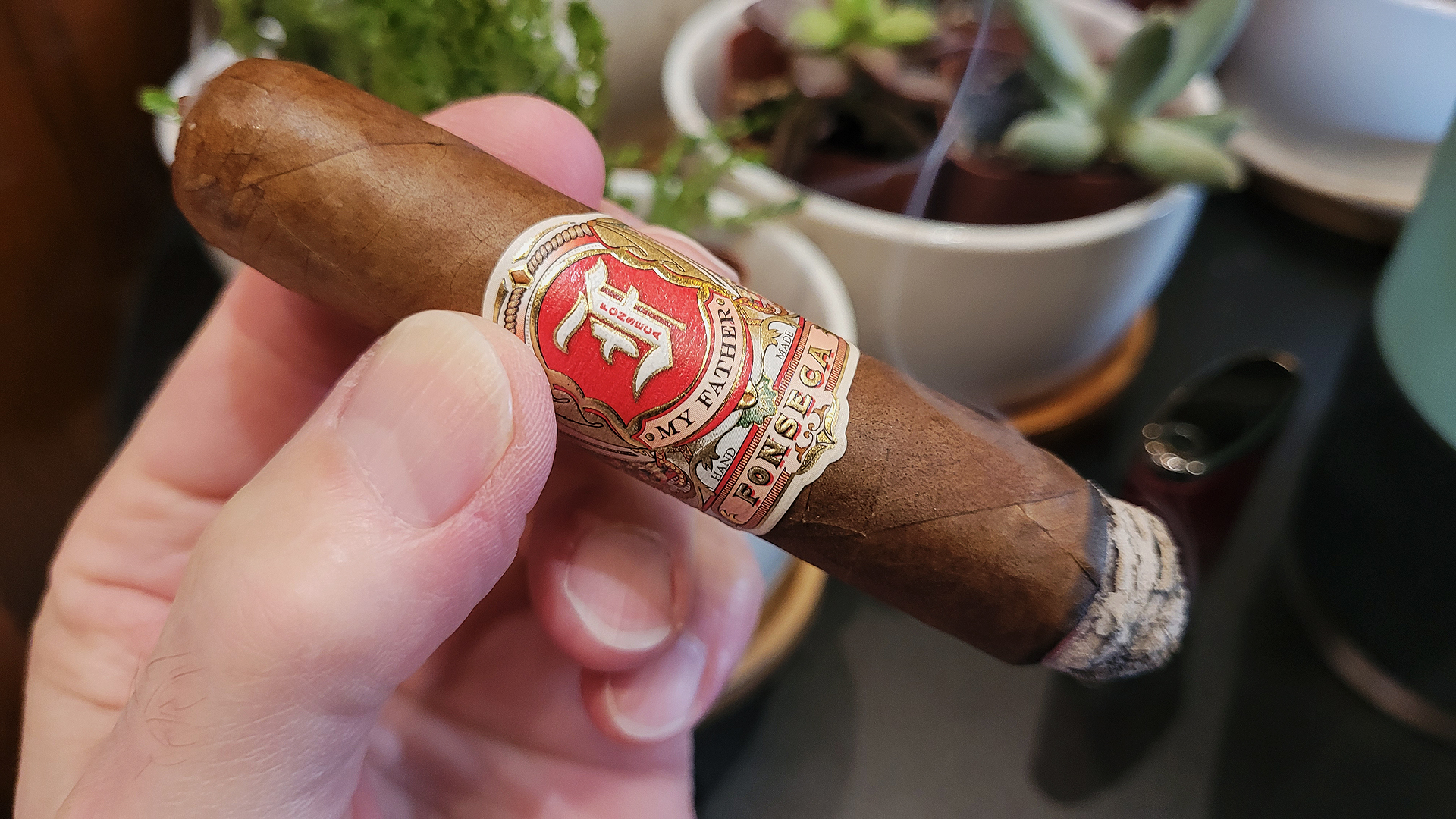 Suffice it to say. . . Being medium-bodied throughout, this cigar qualifies for every level of experience. I expected the new blend to be a little more expensive, but I’ll give it a nod at its nine-dollar-plus price, for the outstanding quality, flavor profile, plus the fact that I found it so enjoyable.

Construction: Beautiful red-hued golden-brown color with a seamless roll and triple cap. I had a few small cracks in my sample and it never affected the draw, burn or flavor.
Draw: Perfect.
Pre-light flavor: Lightly sweet.
Toasting & Light: A quick shot of pepper that evens out nicely.
Base flavors: Sweet earth, honey, leafy greens, and dry wood.
Retrohale: Peppery and bold with notes of citrus. Almost like orange peel.
Aroma: Very woody aroma with a hint of sweetness.
Burn & Ash Quality: Clean burn line, tidy salt and pepper ash, and breaks off with a nice cone.

It’s been a while since I had the original, but I remember the basics…so…does a My Father Fonseca stack up? With an entirely new blend and country of origin, it’s easier said than done. Let’s let the blend do the talking.

Off the first puff, there’s a dusting of pepper making the cigar come off a little stronger than it is – a common event with Nicaraguan tobaccos. I found large portions of sweet earth that had a leafy green quality, some gooey honey sweetness in the background, and an aromatic tinge of dry wood. 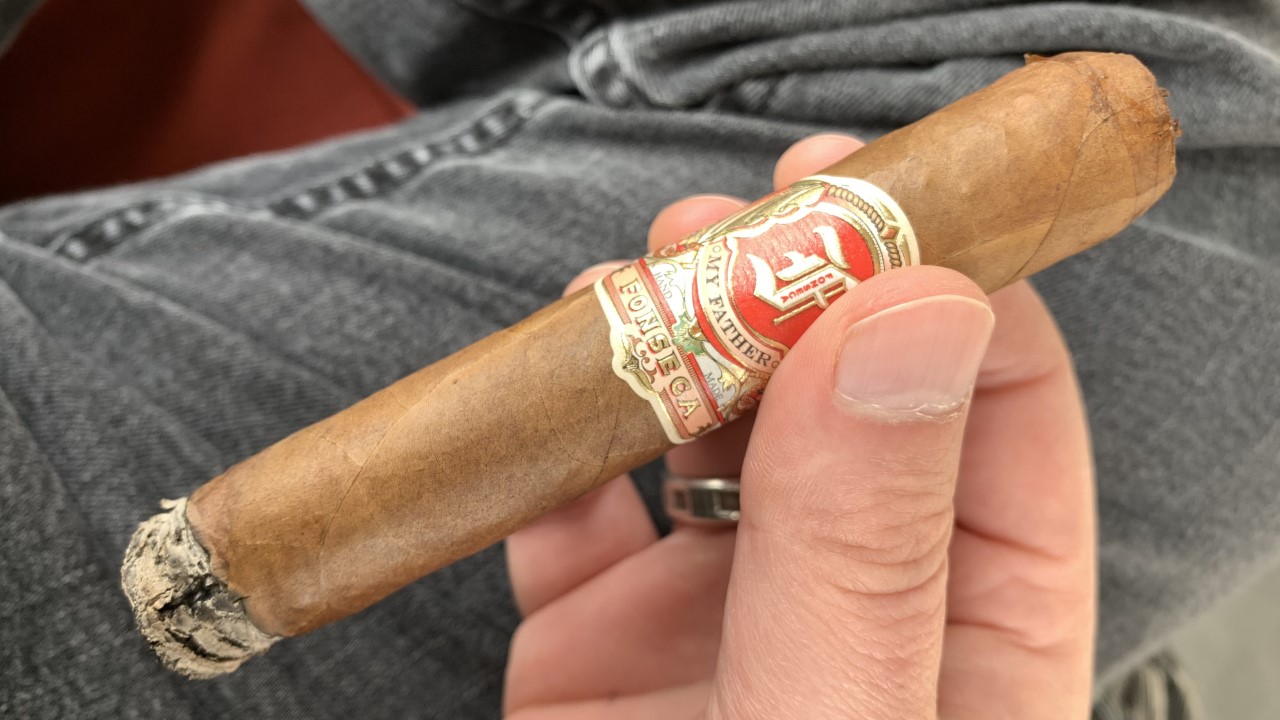 There weren’t any big changes until near the halfway mark, where My Father Fonseca turned creamy and boasted a savory-salty finish. Toward the end, I picked up a mineral flavor that skated around a layer of dry earth and a somewhat tart finish.

Each section had its own little show to put on, making for one hell of a complex smoke, even if the changes are subtle. Brass tacks: It’s a great medium-bodied cigar that never really hits that hard. I think this stick crosses lines into just about any smoker’s camp – especially if you love cigars that have a large menu of flavors.

Reading Time: 6 minutes Under Davidoff’s impeccable lines of world-class cigars hides a little-talked-about, entry level smoke called 3×3. We’re here to put it to the test and see if it’s made of that Davidoff magic – watch now!