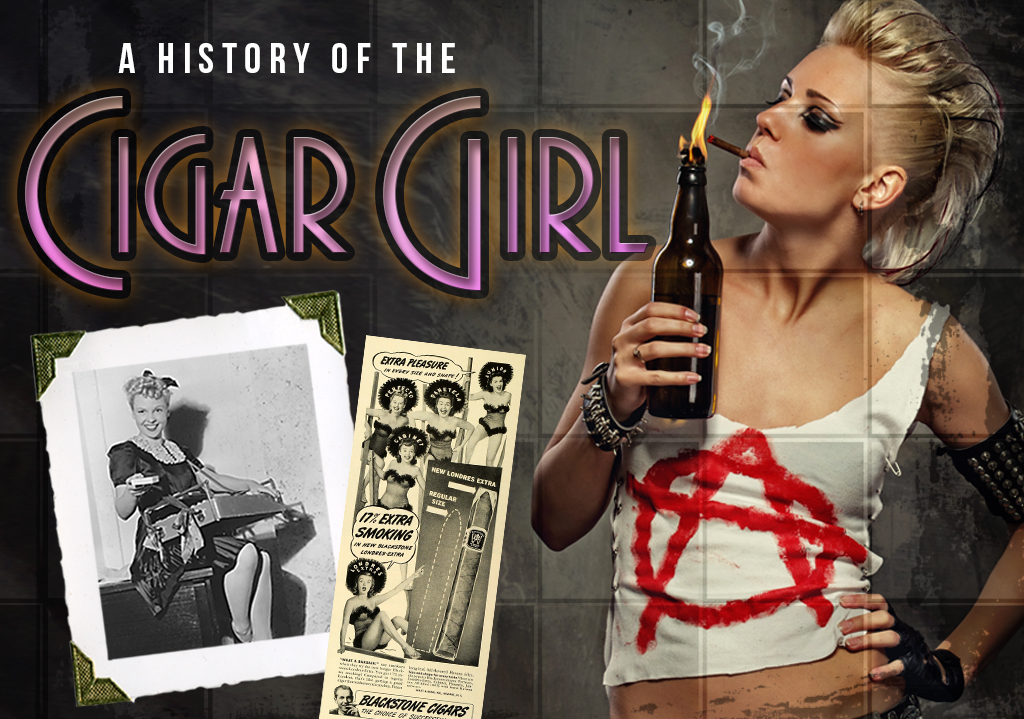 History of the Cigar Girl

Our History of the Cigar Girl begins in pre-war America, during the Roaring Twenties. It was an Era during which America enjoyed considerable prosperity, particularly in her urban centers.

Fueled by this newfound wealth, entrepreneurial restaurateurs began to expand their establishments from pure eateries to “supper clubs,” a destination where patrons could spend an entire evening eating, drinking (despite the prohibition of alcohol), socializing, and listening to live music.

The cigar girl was a common fixture at such clubs. She was an invariably pretty, young girl who wore a bright (often red trimmed in black), short saloon-style dress and sported a pillbox hat. Around her neck, she holstered a tray with a considerable selection of cigars, cigarettes, and various other tobacco products and sundries. Depending on the venue or the wishes of its owner, she might also carry candy, snacks, drinks, chewing gum, flowers, or novelty items.

Her job was more than just selling tobacco products; she became part of the ambiance, mixing among the patrons while adding a touch of class and full-service. The cigar girl relied on her charm, quick wit, and a flirtatious manner to catch the attentions of businessmen, who would tip graciously for the pleasure of speaking with such a beautiful young woman. She is often described as having been the “life of the party,” and thus while her refrain of “cigars, cigarettes?” certainly enticed tobacco buyers, most customers were paying as much for her company as they were for her wares.

She is depicted in many films, with a notable early example from 1924 in the Soviet silent comedy “The Cigarette Girl from Mosselprom” (Papirosnitsa ot Mosselproma) in which a man frequently purchases tobacco from a girl he’s become infatuated with, despite not being a smoker. Within a few years the cigar girl archetype was well-established by Hollywood, and when the Eighteenth Amendment was finally repealed in 1933, she had caught on as a cultural icon: she could be found in restaurants, social clubs, bars, casinos, and even airports. Her popularity continued to soar through the postwar era into the 1950s, when she could be seen at sporting events and in the lobbies of theaters and music halls during intermissions.

But she was ultimately no match for modernity. The mid-1950s brought automated vending machines which worked for free, and could earn the venue-owner a tidy profit besides. Changing attitudes about smoking notwithstanding, she was increasingly seen as a relic of the past.

These days, you are more likely to see a cigar girl at a Halloween costume party than you are inside NYC’s Algonquin Hotel. But even though she has been largely relegated to a romantic yesteryear curiosity, there is still a demand for her services. A simple internet search reveals numerous companies like Peachy Puffs and Hollywood Cigarette Girls that specialize in hiring out models for private parties and corporate events whose organizers are looking to add a touch of old-school sophistication to their event. Many of these companies even offer cigars and cigarettes on their trays. Who knows? Maybe the cigar girl will make a full-fledged comeback toting some great Acid Cigars and other premium smokes.

[…] or cigar women labored at bars and golf equipment starting within the Twenties. They would often sport a pillbox hat and a tray round her neck with a collection of cigarettes for […]