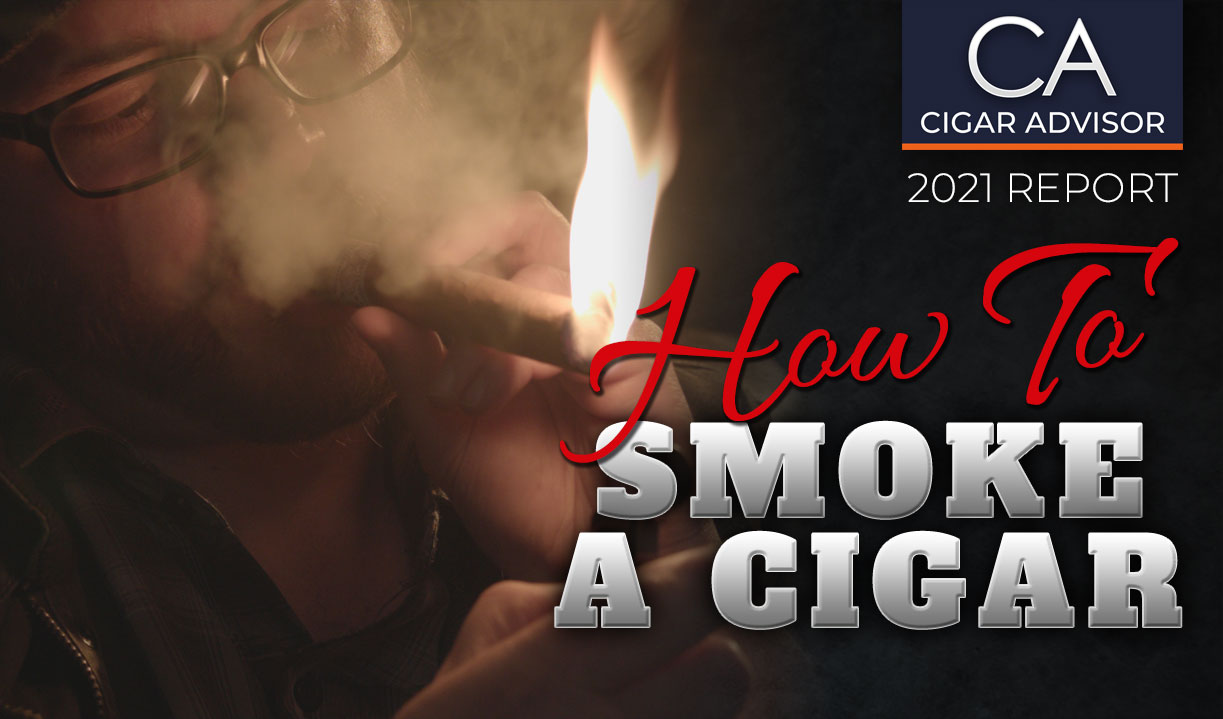 Cigar 101: The Proper Way to Smoke a Premium Cigar

The right way to smoke your cigar is by drawing smoke into your mouth for a second or two – kind of like drinking from a straw – allowing it to swirl around and coat your palate. Make sure you don’t inhale (more on that later)...just leave the smoke there a few seconds and move your tongue around inside your mouth. This allows you to pick up a wider range of flavors (sweetness, earthiness, nuttiness, spices, etc.) and characteristics of the cigar, which will ultimately tell you whether the cigar’s flavor profile is for you. Then, you can blow it out gently, or simply open your mouth and let it flow out slowly.

You’ll want to take a puff once every 30-60 seconds. Pacing yourself this way will prevent nicotine sickness and as well as burning the cigar too hot, which leads to bitter flavors, nasty tar build up, and an inconsistent burn.

Check out this video that shows more on how to smoke a cigar:
Plus: how to cut, light, and smoke your cigar at the ideal pace.

How To Cut and Light Your Cigar

Now that you’ve got how to smoke your cigar down, let’s circle back and talk about how to get it cut and lit.

This cutter from Vertigo will slice cigars of any ring gauge with ease and precision. Even though it’s under $4 at press time, its sturdy plastic frame and razor-sharp blades will last years. It’s better to go the inexpensive route as you learn the ropes, and this is a great way to get started.

You’ll want to start off with a nice double-blade guillotine cutter. Even better if you have a ‘perfect cutter’ with a guard. If not, here’s a lifehack on how to get a perfect cigar cut every time. Open the cutter and place it on the head of the cigar. Think of this more like shaving than cutting. The important thing is to expose enough tobacco at the head to get a good draw. Try to keep from cutting the cigar too far below the ‘shoulder’ (this is where the cap ends and the cigar body begins) where the straight side of the cigar meets the head.) Clipping too deeply may result in the cigar unraveling. If unraveling occurs, simply wet your lips and turn the cigar in your mouth in the direction it was rolled. That little bit of saliva should keep it in place.

We call the Vertigo Cyclone ‘a workhorse’ because it just doesn’t quit. It’s a triple torch lighter with a large transparent fuel tank. You always know when you’re running low. The best part is its price, running well under $10. It’s my favorite lighter, and mine’s been performing issue-free for over two years. In my book, it’s the best lighter for beginners on the market.

Next, you’re going to toast and light the cigar. Cigars can be toasted and lit with a variety of lighters. The most popular cigar lighters have torch flames. These are especially good for toasting because you can char the foot much more carefully, and unlike a match, the torch flame won’t burn your fingers. By the way, if you prefer to use matches, make sure they are cedar cigar matches. They tend to be longer, and the cedar imparts a nice aroma when lit.

Holding the cigar in one hand in front of you, place the flame as close to the foot of the cigar as possible without touching it. Soon the tobacco will begin to turn black. Don’t overdo this. It might take a little longer, but you want to toast the foot gently. Over–charring could cause the cigar to taste bitter. Now place the cigar in your mouth. Again, with the flame just barely touching the foot, begin to puff. When you see an ample amount of smoke appear, take the cigar out of your mouth, turn the foot toward you and blow on it. Continue to this until the entire foot of the cigar is glowing red. Put down the lighter, kick back and start enjoying your cigar. Want to see this in action? Check out our video tutorial here.

And there you have it! While cigar smoking is the kind of hobby that’ll have you always learning something new, it’s not as difficult as it looks to get started. These few steps will have you puffing away like a pro. And if you forget a step, those savvy cigar lounge vets tend to be extremely friendly, non-judgmental, and more than happy to help you enjoy your early cigar experiences. Most cigar smokers take great amounts of pleasure in sharing their passion and helping others, so if you’re still unsure how to smoke a cigar properly, you’ll surely learn by observation.

Some other tips for new smokers:

Average size cigars such as Coronas, Lonsdales, and Robustos will generally stay lit for a half hour or more. Large cigars like Toros, Gordos and Churchills can smoke for well over an hour. Rule of thumb: Before you light up a cigar, be sure you will have enough time to smoke it completely, and preferably, without interruption. Some cigars won’t handle a relight well.

Moreover, the time it takes you to smoke a cigar depends on how often you puff on it. According to most experts, about one puff per minute is the standard. Puffing too often on a cigar will cause it to burn hotter, and in turn, can make the smoke taste harsh, sacrificing the flavors the blender intended for you to enjoy.

Another factor to consider when smoking cigars is atmosphere. Since the key component of smoking a cigar is to relax, be sure to smoke your cigar in an environment that lends itself to relaxation. This will help you better appreciate the flavors and aroma of your cigars, too. The location could be your back porch, or if you’re fortunate enough to have your own smoking room, even better. Especially if you live in a cold climate during the winter months. A smoking lounge or club where you can partake with other smokers is also one of the best places to enjoy your favorite cigars.

Romeo y Julieta House of Capulet is one of the most popular mellow cigar choices. Its smooth consistency and easygoing flavors of cream, nuts, and light spices are perfect for any budding smoking enthusiast.

Next, you have to choose a cigar to smoke! Mellow cigars are often selected for new smokers. That’s because their smooth flavor profiles are easy on the palate. They tend to have less nicotine and provide an enjoyable taste without overwhelming the new smokers with the complexities and heavier flavors found in full bodied cigars that are more of an acquired taste.

Tip 4: Pair Your Cigar with a Beverage

Try not to smoke a cigar dry. In other words, pair your cigar with a drink. Coffee is one of the best and most popular beverages to drink with cigars. Single malt scotches are also among the most popular libations, as well as bourbon, whisky, and wine. Even water helps to cleanse your palate between puffs. There’s a ton of pairing options to explore later on, but these basics will get you started.

Tip 5: Why You Don’t Inhale a Cigar

Unlike cigarettes, cigar smoke is not inhaled. Inhaling will only inhibit your enjoyment of the smoke and will most likely definitely cause you to cough. Smoking cigars is more of an aesthetic experience in which the flavor and the aroma of the smoke combine for an all-inclusive olfactory and taste bud stimulus. Holding the smoke in your mouth a few seconds and expelling is all you need to do to appreciate the flavor of the smoke.

Tip 6: When Possible, Try Not to Put Your Cigar Out

Finally, when learning how to smoke a cigar, you also need to know when and how to put your cigar out. The best cigars will often taste great right down to the last inch. However, most cigars tend to turn bitter or tarry in the last two inches. Once a cigar begins to leave a sour or bitter taste on your palate, that’s usually the best time to put it down. Keyword, “down.” Never snub out a cigar as you would a cigarette. Simply leave the cigar in the saddle of the ashtray and it will go out by itself. This way, you can also enjoy the remnants of its aroma in those final minutes.

And that’s all there is to it!

Now you know the right way to smoke a cigar! Do you have any tips or tricks that will help new smokers? If so, leave them in the comments below!

One thing I did not notice in your article, was how often do you draw on a cigar? I’ve heard that once every 30 seconds. This seems like a long time between draws. What are your thoughts on this? Thank you.

Puffing too often could make the cigar burn too hot and taste harsh. Plus, smoking a cigar is an enjoyable experience, no need to rush it!

Thanks for your feedback, if you have any other questions please let us know.

“Sipping” is a great technique I learned for fully enjoying a cigar. You place your lips on the tip like your kissing it and sip with the tip of your tongue in the line of inhaled smoke. If you draw too hard and it goes up the back of your nose (like pool water) you are doing it right… just go easy so that doesnt happen. A long ash and well rested cigar works best for this since its a more sensitive way to taste.

I find a combination of this technique and just regular huffing to be a great way to enjoy almost every cigar. Some are better sippers and some are better huffers. I often start sipping and end huffing when the cigar is too harsh with built up nicotine to sip.

A rather interesting cigar

Pairing Drinks and Cigars: A Guide