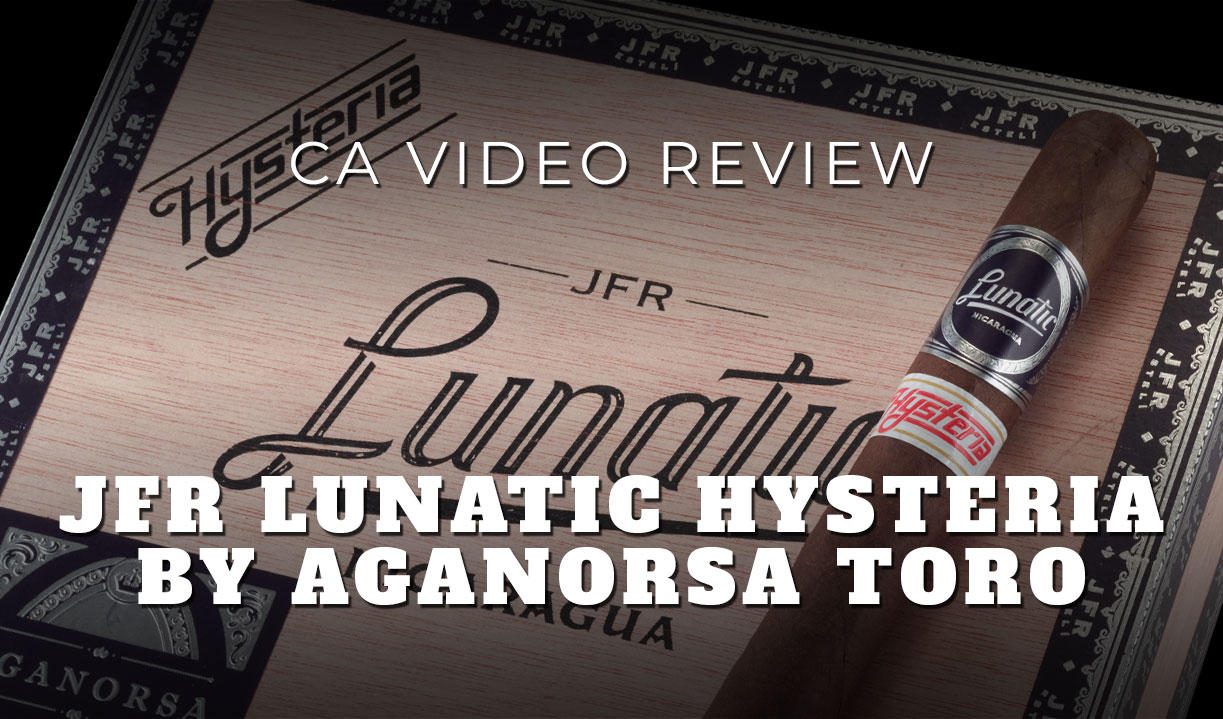 JFR Lunatic Hysteria by Aganorsa Leaf Cigars – The Back Story

The folks behind Aganorsa Leaf say, “You need to be a little crazy to smoke these cigars.” And with Lunatic’s sizes reaching a belt-busting 8” x 80, maybe they’re partially right. One thing is certain, cigar enthusiasts took to them quickly. In only four short years after its initial debut, the brand was honored as one of the top 10 cigars of 2018.

That brings us to Lunatic Hysteria. This cigar is actually Famous’ third go-around with Aganorsa – the first two being their Famous 80th contribution and Siboney Reserve. 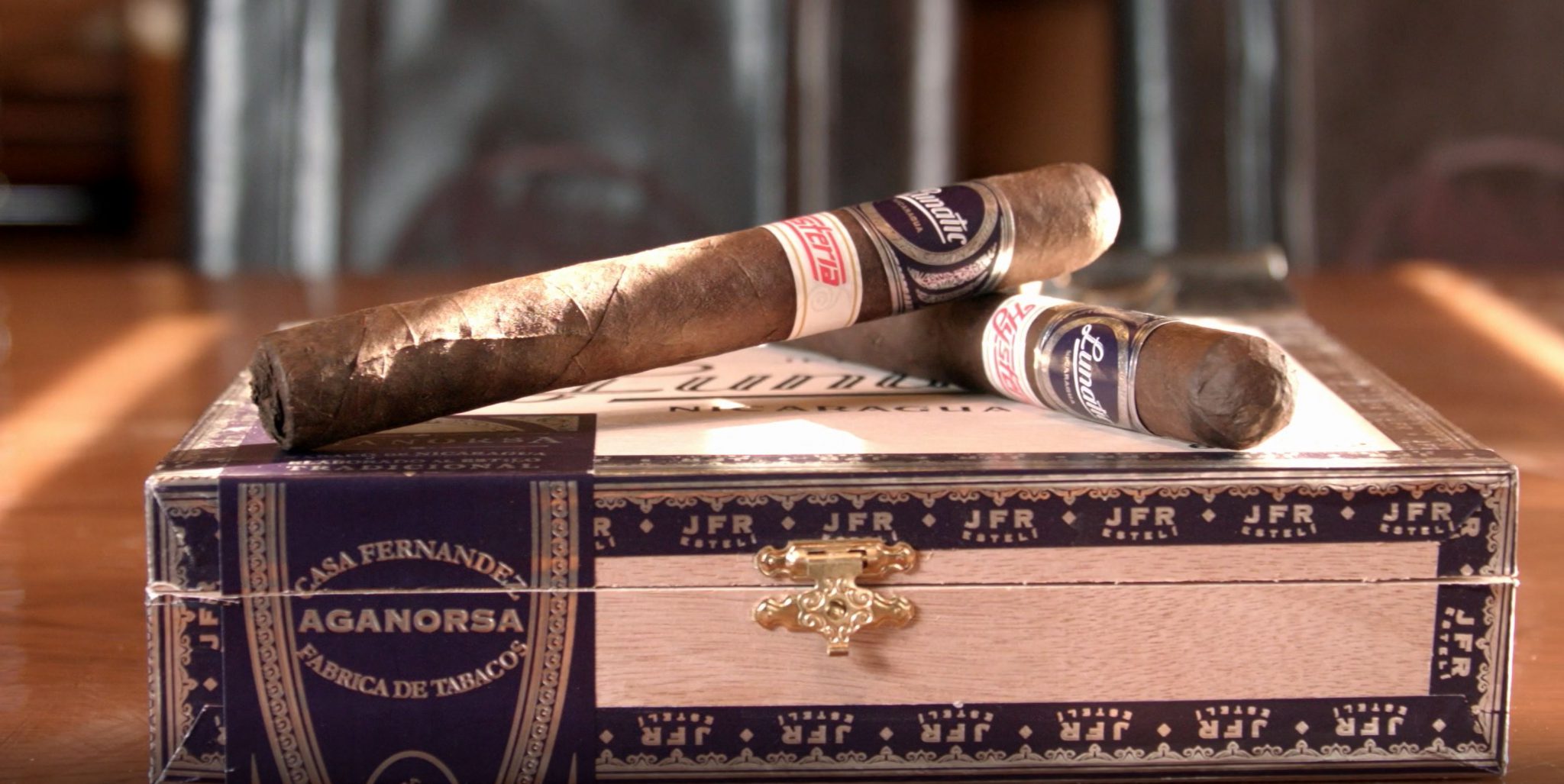 “Hysteria is the first exclusive we have created from our Lunatic brand,” said Aganorsa Leaf Vice President, Terence Reilly. “We wanted to ensure the blend would be something cigar lovers would go mad for. Bursting with flavor and rich in body, this cigar is exciting from start to finish – worthy of the great partnership we have with Famous.”

The blend features the familiar core of Aganorsa-grown tobaccos and a Mexican San Andrés wrapper that isn’t found on any of the line’s previous iterations. One difference of note from Lunatic’s standard fare is the omission of large sizes like 70 and 80 gauges, as Hysteria appeals to a larger crowd with two popular sizes: Robusto and Toro.

Below, you’ll find each of our thoughts on this new cigar…of course, taste is subjective – and our goal is simply to provide you an outline of what you may expect from Lunatic Hysteria. If you’ve already given one a go, let us know in the comments below!

Summary: Another Famous Smoke Shop exclusive from Aganorsa Leaf? Paint us lucky, because so far, their track record with the Aganorsa Famous 80th and Siboney Reserve has been stellar. 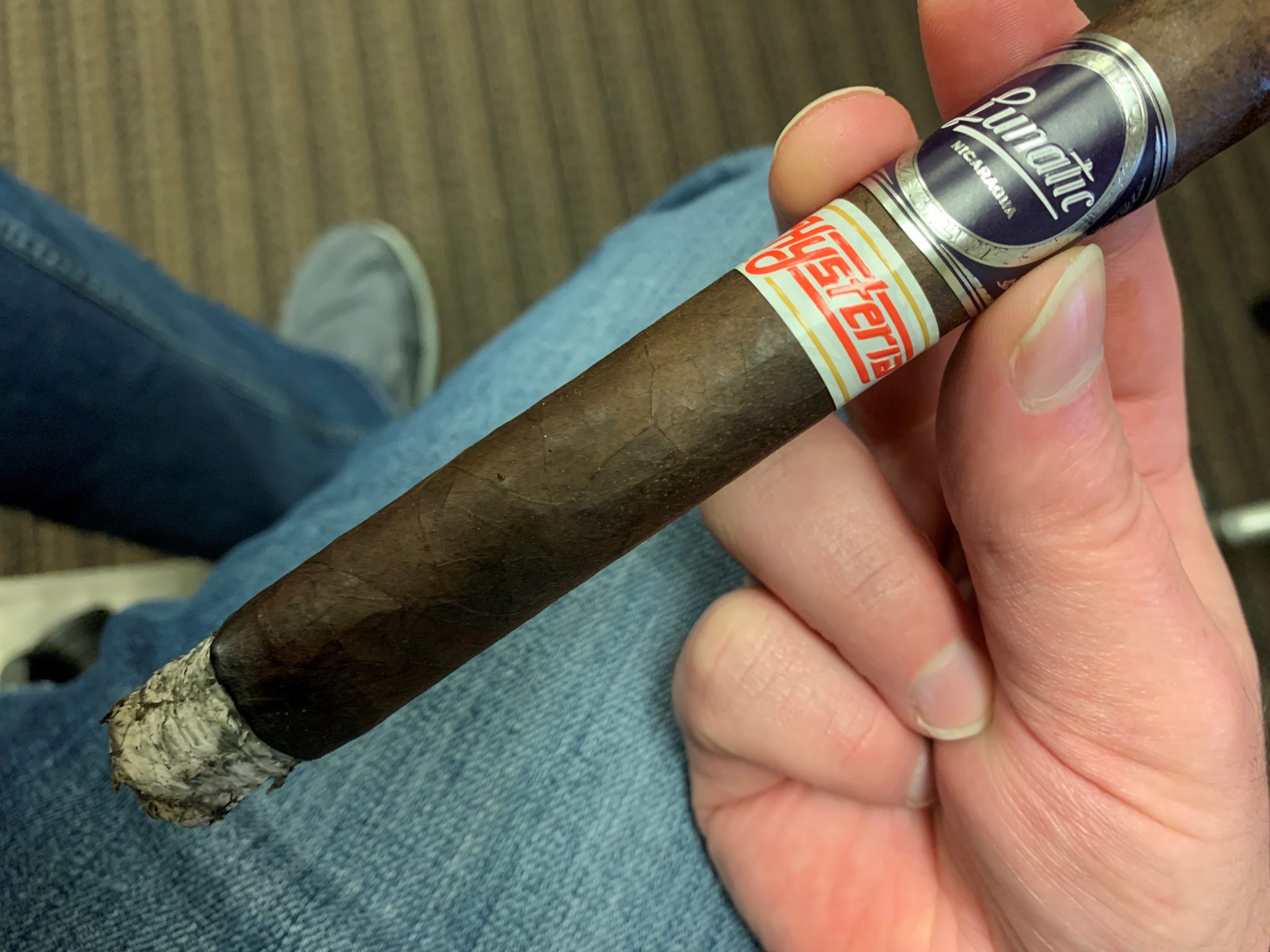 Lunatic Hysteria begins with a little bitterness from the flagged foot, but that quickly goes away. Its flavors open strong on the earthier side with notes of pepper, spices, and rich tobacco. And that’s when I noticed one of the strangest finishes I’ve tasted…seltzer water.  If you’ve ever sipped it straight, you’ve certainly noticed a somewhat salty, fizzy sensation. That’s what the pepper was like – not so much tingly as it was effervescent. After a short while, that tonic element faded and passed the baton to roasted coffee.

The second half was less complex. The pre-light mineral flavors resurfaced, the pepper and earth were still there, and the retrohale had smoothed out. Sadly, there wasn’t as much sweetness as I’d have liked, especially considering that it is wrapped in a San Andrés Leaf. All in all, it’s still a good smoke with a decent amount of complexity and a big variety of flavors, but to me, the blend performs much better in the Robusto size. That smaller ring gauge and shorter length make a big difference. I’d try both and see which fits best to your palate. 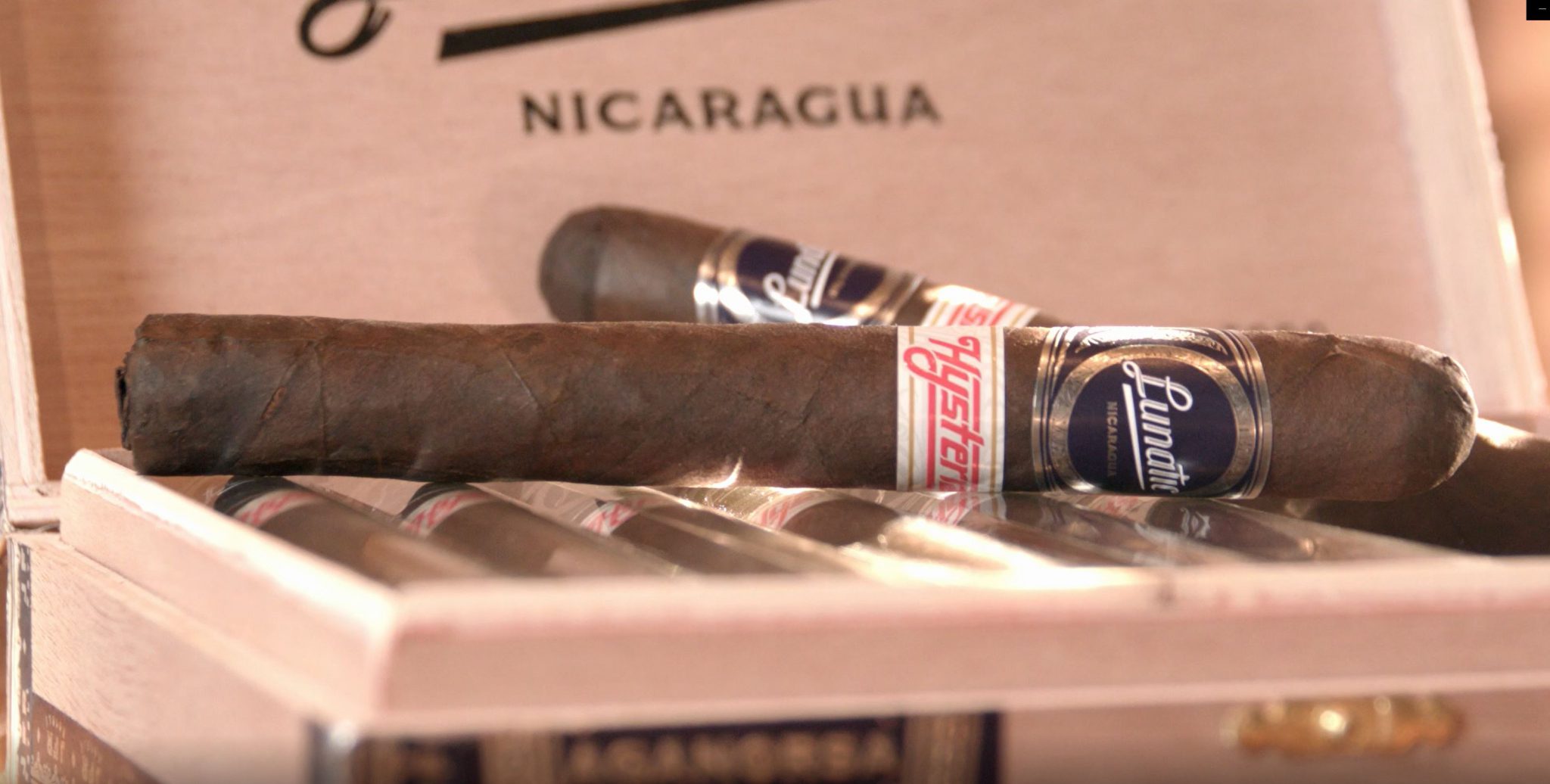 Construction: Tightly-packed Toro finished in a chestnut streaked maduro wrapper, with a closed foot.
Draw: Limited, due to the close foot.
Pre-light flavor: A bit of cherry, cedar and cool dry herb.
Toasting & Light: Leather, wood and pepper.
Base flavors: Coffee, charred wood, pepper, slightly sweet.
Retrohale: Sting of pepper, coffee, charred wood.
Aroma: Dry leaves and baker’s chocolate sweetness.
Burn & Ash Quality: Grey ash stacks neatly, and holds for about an inch, inch and a half. Mostly straight burn.
Balance of flavors: Balanced, but this cigar will be known for its brawn.

Summary: So, a couple of things I learned smoking this cigar:

After a sweet start, that sugar high burns off to reveal a much sturdier profile: slightly charred wood, with an undertaste of coffee and molasses.

The JFR Lunatic Hysteria offers up some weirdly vivid flavors throughout the first half…the charred wood sensation is like a firepit or campfire; the sweetness is dry and subtle, like fig newtons. The smoke has a taste of toasted grains (think wheat or oats). The finish is long, with a tannin taste – so again, woody – in that the smoke is a little drying to the inside of my mouth, like dry red wine. And not as fruity. 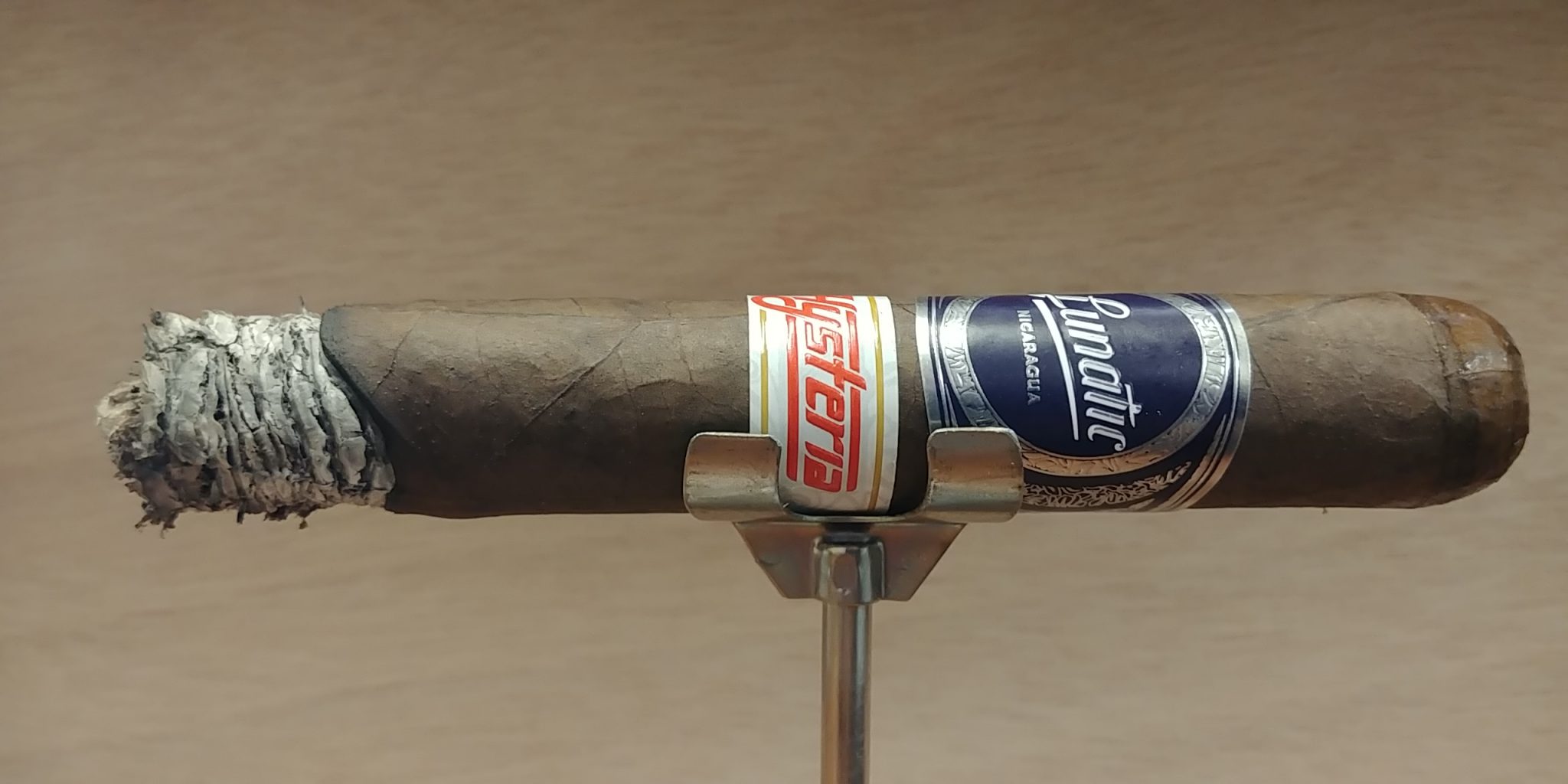 Halfway through this JFR begins to whistle a one-note song: wood. And strength. This is the point where Hysteria turns on the afterburners, and gets explosively strong through the end of the smoke. An espresso taste makes an appearance to keep it interesting, but that’s it ‘til the finish.

If you like strong cigars – think LFD, Asylum Straight Jacket, or JdN Antaño…El Cobre by Oliva is another – I think you’ll love this JFR Lunatic addition. If you’re not into full-tilt, full-time smokes like these, however, pairing this cigar with a bourbon is going to make it very accessible. I’ve had rye recommended to me for this cigar; specifically, Angel’s Envy Finished Rye, which is finished in rum casks…and I can see that juice drawing out some of the underlying sweetness that is hiding out inside this JFR, and really making it shine. 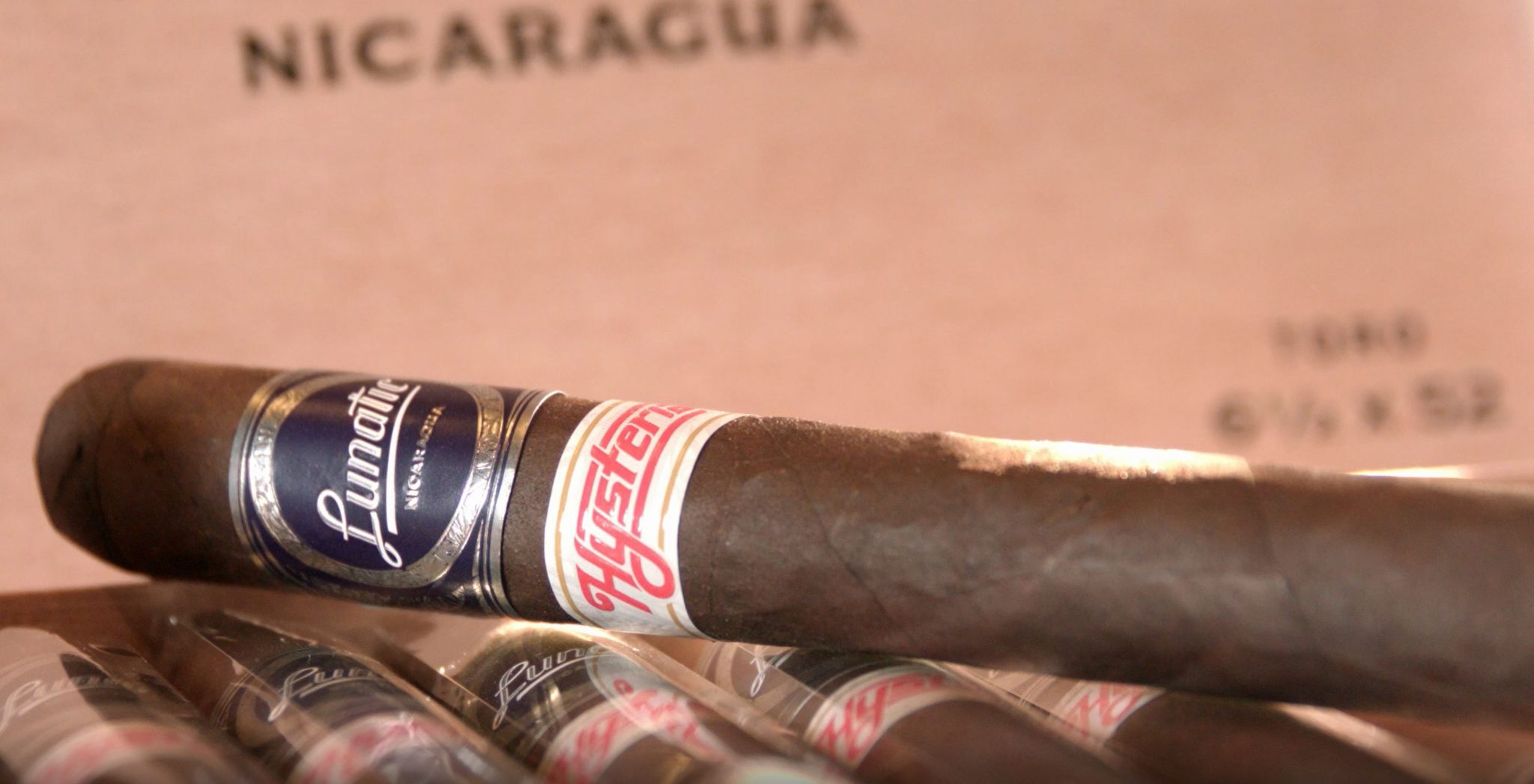 Construction and Overall Appearance: Cigar is well-packed, even in color, and so neatly rolled, the seams are barely visible. The wrapper has more of a silky feel to it than toothy, and is finished with a triple-cap and a closed foot, which can be kept as-is or peeled away before lighting.
Draw (airflow): Just right.
Pre-light flavor (cold draw): The initial notes are lightly sweet and herbal.
First few puffs: A little sweet with a mostly red pepper flavor, and the smoke volume is plentiful. However, any semblance of herbs in the cold draw were absent.
Retrohale: A surprisingly smooth-feeling mix of cedar and red pepper.
Base flavors: Dense earth, red and black pepper, bittersweet chocolate, and charred wood.
Aroma: Sharp and earthy.
Burn / Ash Quality: The burn is excellent, revealing a firm grey ash that leaves an attractive cone when tapped.
Balance of flavors: Very good.

Summary: Following a quite peppery start, the Hysteria Toro rounds-out slightly offering more sweetness than pepper, while leaving a definitive swath of pepper on the long finish; yet, more like black pepper than red.

The flavors in the first act transition from a semi-sweet start to notes of intense earthiness, concentrated bittersweet chocolate, and charred wood. You don’t feel the cigar’s strength in the smoke as you puff. Instead, it creeps up on you, and can cause a little headiness in the latter stages. The more you puff, the more intense the smoke is, so unless you’re a die-hard powermonger, take it easy on this cigar by allowing more time between pulls. You’ll thank me later. 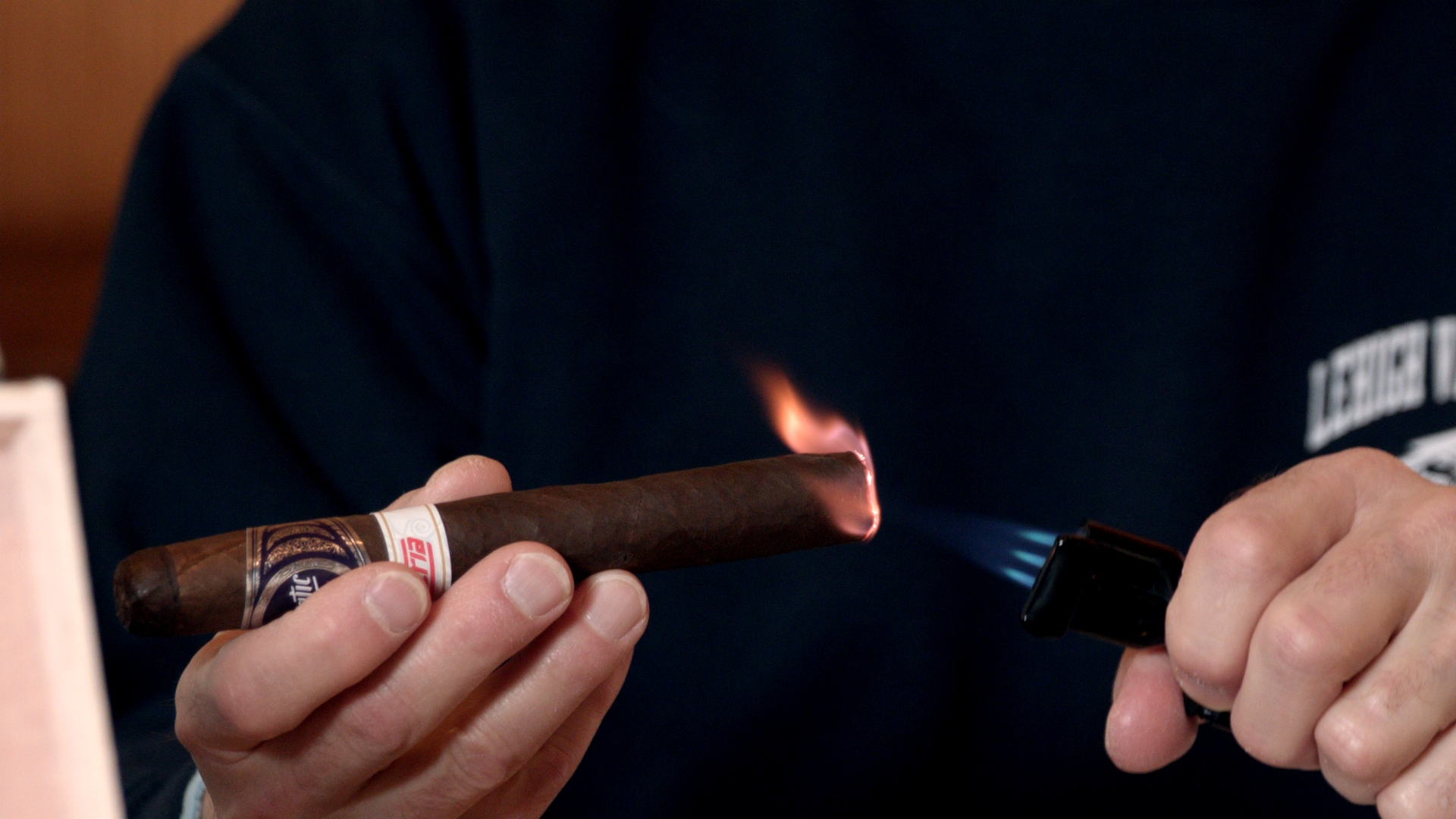 More earth creeps in at the midpoint as some of the other flavors weaken. Some cigar smokers may find the last act the most challenging. It really ramps-up the earth and charred wood. Moreover, black pepper lies stealthily below providing some spice, but without much of a bite.

I found the JFR Lunatic Hysteria to be a very well-made cigar. Of course, I would expect that from an Aganorsa, but it hits its peak early on, hardly budging from its position. Retrohales reveal flavors of cedar and pepper with more woodiness than spice. Hysteria may also be one of the few cigars where you’ll find additional flavors in the retrohale with greater focus.

Suffice it to say. . . I’m a fan of the mainline JFR Lunatics, but they really upped the steroids for this one. In other words, this cigar is not for the proverbial squeamish. If you want a cigar that deals you a full house of Nicaraguan earthiness and high-priming power, the Lunatic Hysteria has your name on it. I also say, take a cue from John and pair this cigar with something that will also broaden your palate.

I had one given to me by me of the local retailers to test drive. It was a perfecto and not a huge RG. I bought two the next time and they were like 4 1/2x 80!! I don’t when like 60’s that much. While I like the mix, I haven’t found anyone stocking normal sized cigars. I’m always up for a new powerhouse. They are difficult to find.

Reading Time: 9 minutes In one of his most ambitious articles, Executive Editor, Gary Korb, takes 15 top-rated cigars and breaks them down into morning, noon, and night segments. Guaranteed to get you through five days of cigar-smoking bliss, or more, read what he’s got on tap . . .Aimed at the avid cigar smoker, Executive Editor, Gary Korb, has a list of 15 outstanding cigars you can enjoy three times a day. Broken down by morning, afternoon, and evening, he’s got you covered for five full days of cigar-smoking bliss.