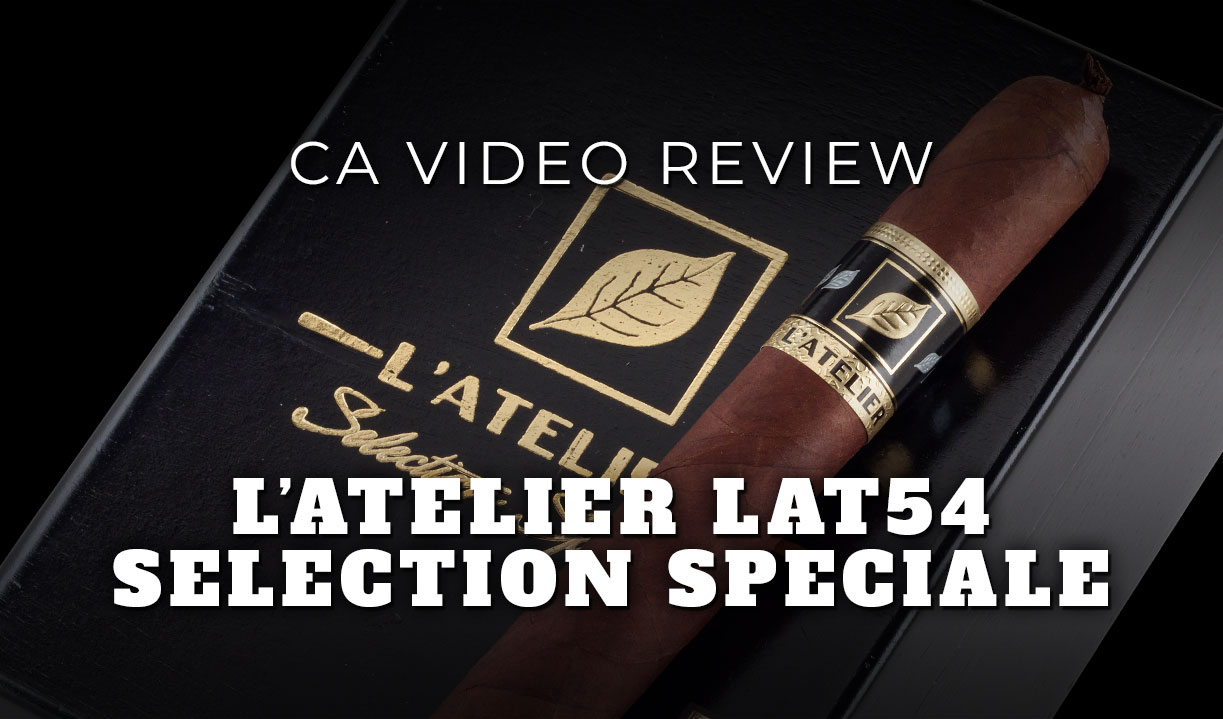 With a name that translates to ‘the workshop’ in French, the L’Atelier story begins in 2012 with a partnership between Tatuaje’s Pete Johnson and My Father Cigars in Nicaragua. The original blend’s three sizes – and even its pigtails – were carbon copies of the Cohiba Behike – one of the most beloved Cuban cigars of all time. In the decade that’s followed, that brand has added LAT Maduro, La Mission, the wildly popular Surrogates series, and more. 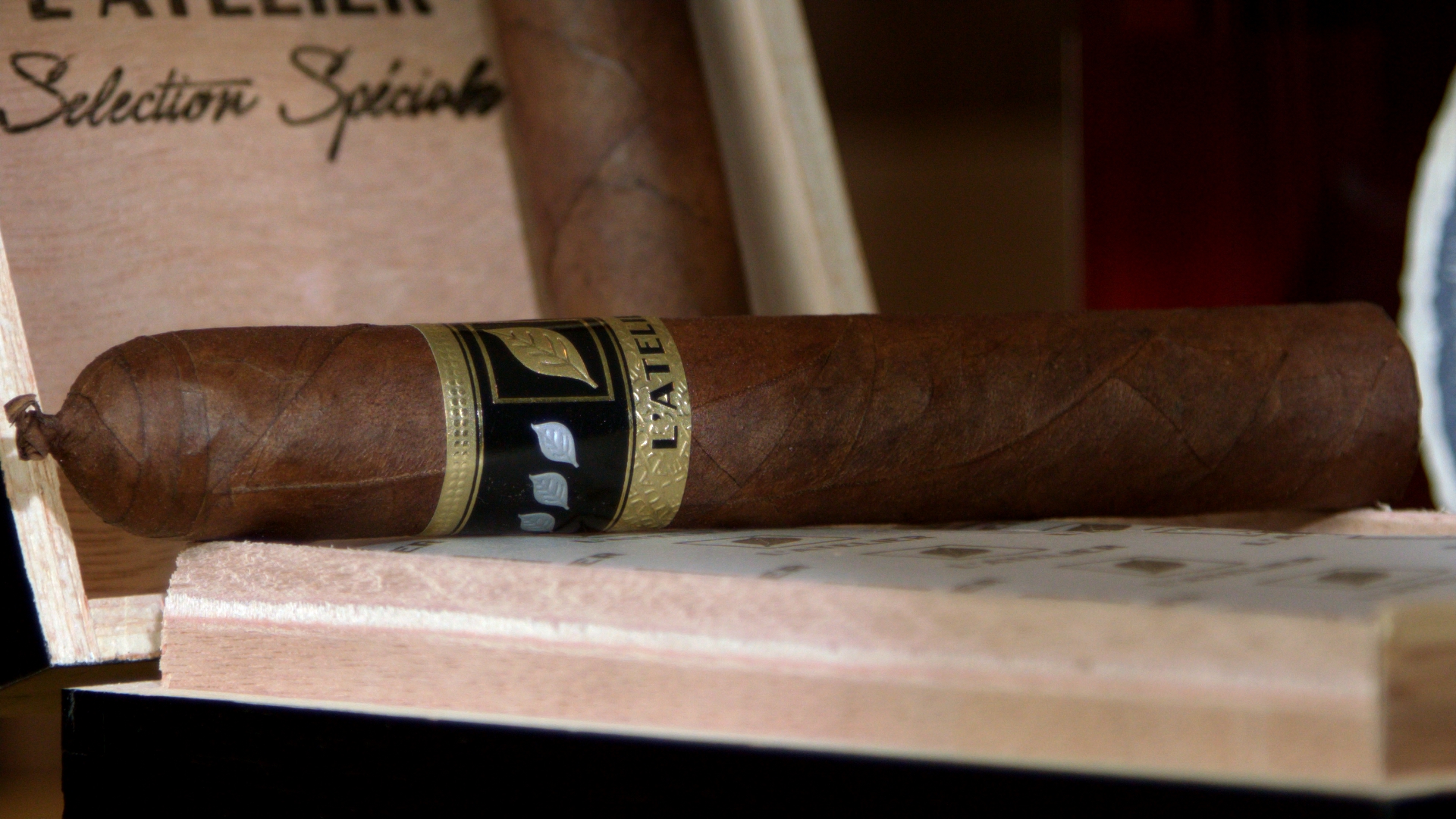 This leads us to L’Atelier Selection Speciale which complements their flagship series with a trio of new vitolas wrapped in the same Sancti Spiritus tobaccos from Ecuador – but from higher up the plant.

“The magic in tobacco is the primings,” said L’Atelier founder, Pete Johnson. “We love how a cigar can be completely different just from the priming of the wrapper. The original L’Atelier line is more mellow and creamy, while the Selection Speciale adds some chocolate and coffee to that cream. All of that just from going up the plant.”

What is Sancti Spiritus tobacco exactly? Good question. The name might sound like something out of Ghostbusters, but it’s the technical name for a hybrid leaf of Criollo and Pelo de Oro. LAT has featured these leaves in the past, but only as a binder in a handful of limited run cigars. Sancti Spiritus leaves are typically both sweet and savory, leaning toward the sweeter side. 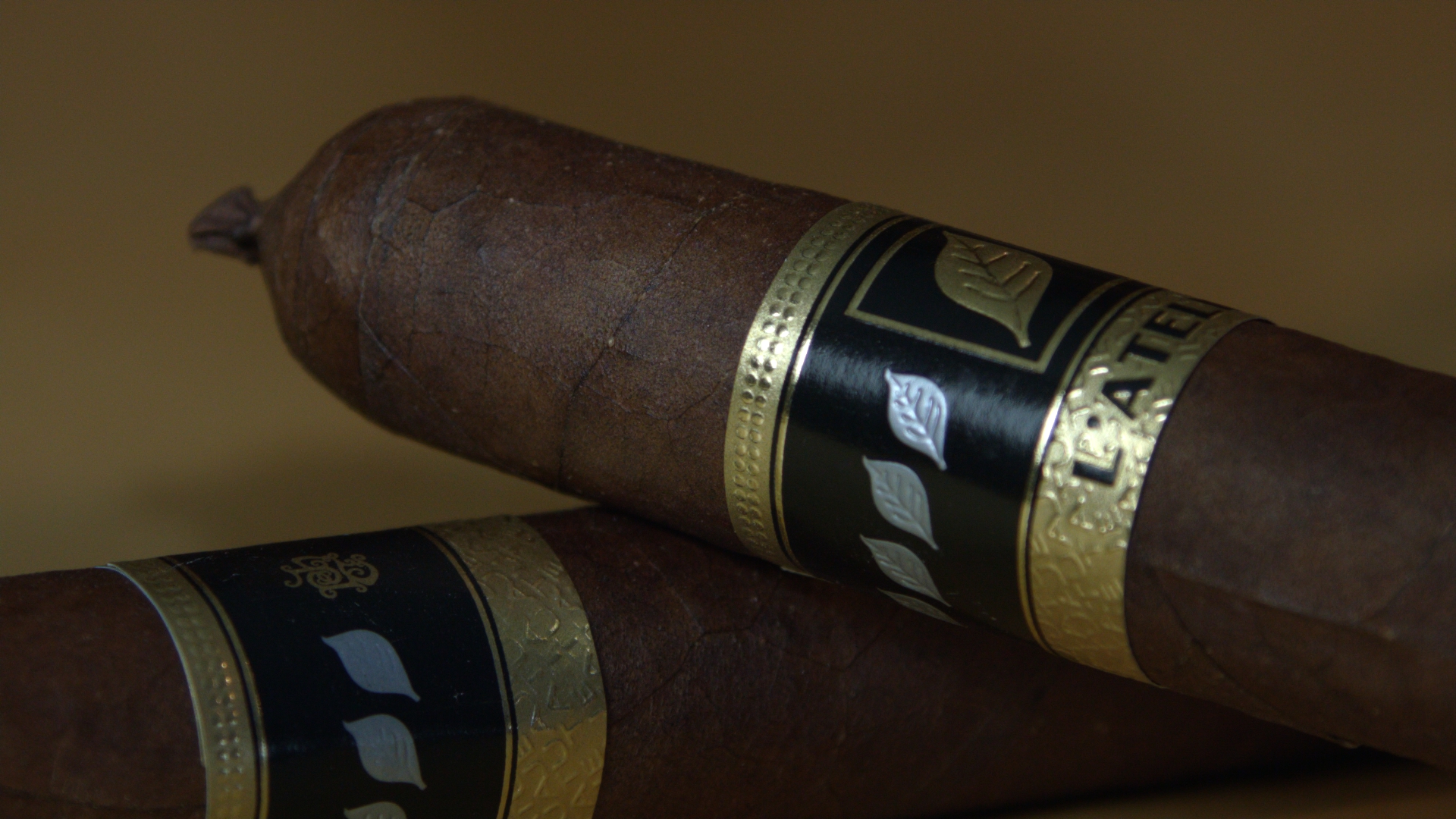 Our goal in this panel review is to give you a roadmap of the flavors to expect from L’Atelier Selection Speciale, not to give it a rating or score. To best accomplish this, we’ve selected a size right down the middle (LAT54 5 5/8” x 54) of the new blend to get our bearings. Check out our written and video reviews below to get some inside baseball on whether these cigars will be at home in your humidor! 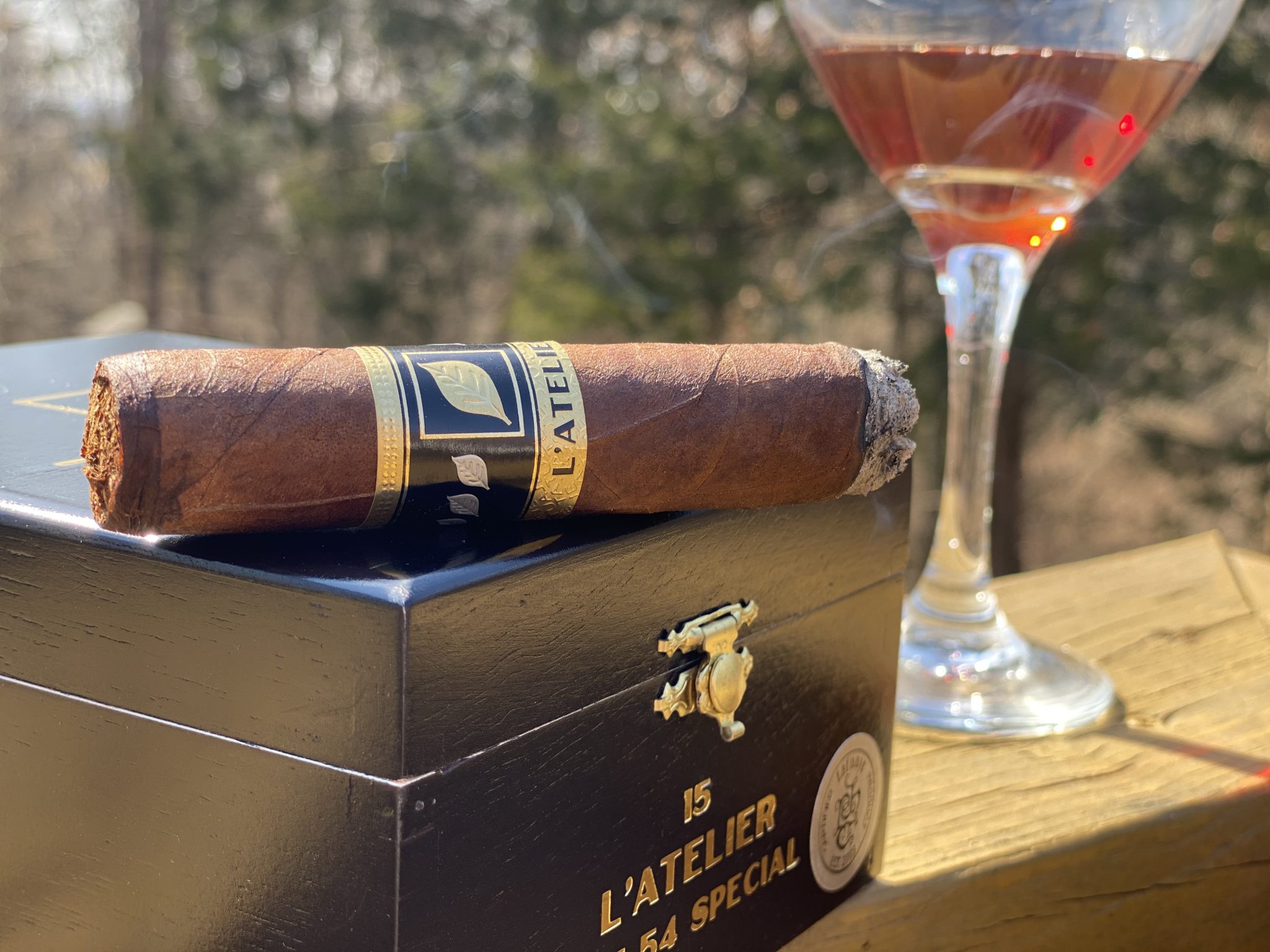 L’Atelier Selection Speciale Cigars are presented in the following sizes.

The L’Atelier Lat54 Selection Speciale is a quite a handful. For some reason, it looks bigger than it is, but “big” is what really defines this Pete Johnson cigar. A big shot of earth and pepper greet you out of the gate, but it doesn’t take long to round out to a smooth, creamy cigar with some additional spice and an underlying sweetness.

As the cigar crosses into midpoint territory more flavors emerge. Among them are a kind of woodsy flavor, plus a note of black coffee and the occasional leathery note. Also joining the party is a hint of bittersweet chocolate. 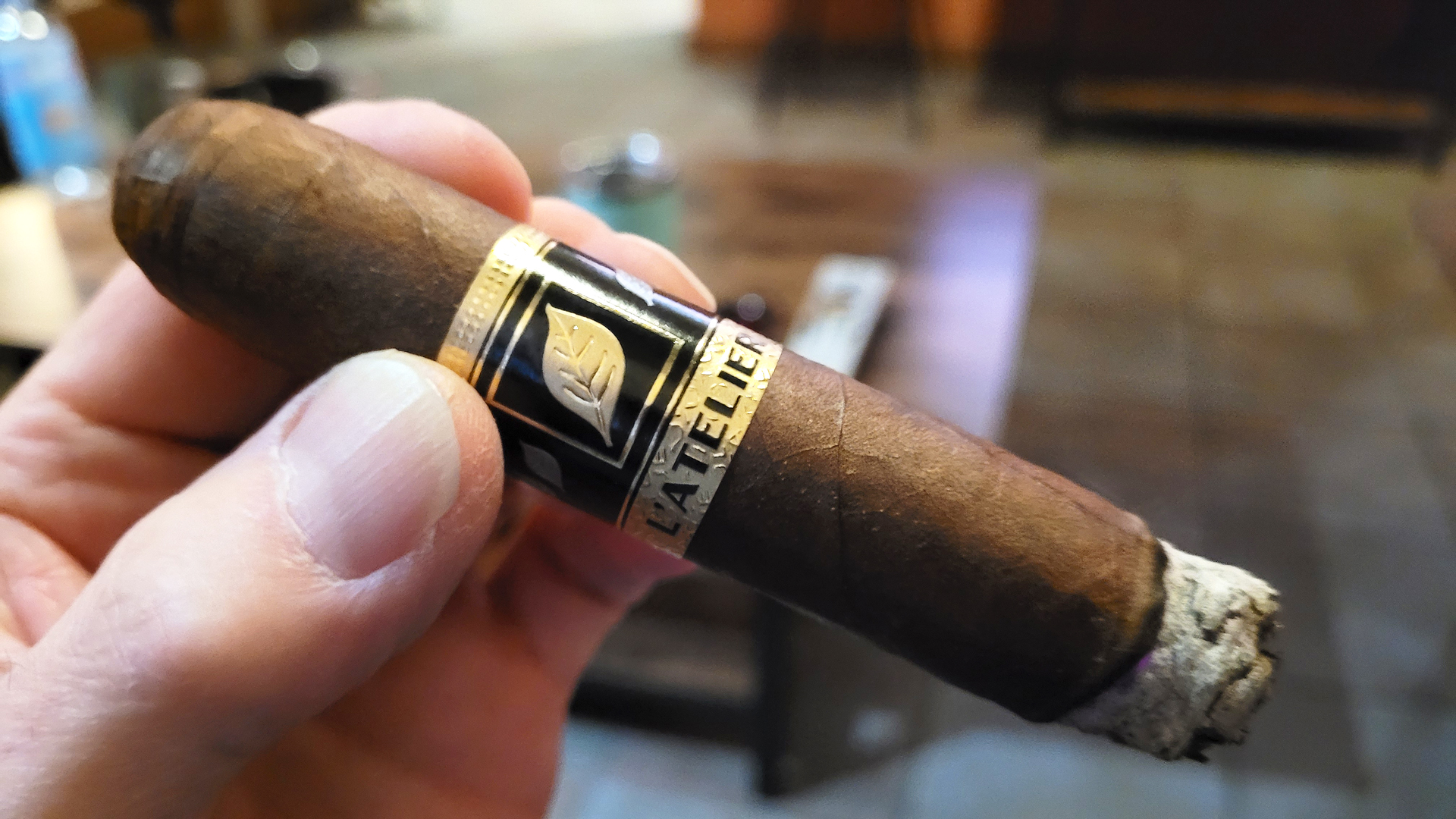 What really impressed me was how this cigar was so full in body yet, the strength never reaches into the red zone. That alone told me that the tobaccos were especially well-fermented and aged leaving the body mostly medium-plus in strength. The flavors remained fairly consistent, but there was also a nice surprise as the smoke took on a sweeter note. In the final third the sweetness revealed itself even more, especially in the sample I smoked on camera. By that time, it was pretty clear that my Lat54 was a pretty complex cigar.

Suffice it to say. . . The highlight of this cigar was the sweetness that comes from the higher priming Sancti Spiritus wrapper. Add to that, the balance of flavors and you’re looking at quite a banquet. Moreover, the boldness of this cigar as it smokes down may be a bit much for new cigar smokers, since this cigar has a tendency to get pretty heady. That said, more experienced cigar smokers will have a field day with the L’Atelier Lat54 Selection Speciale.

Construction: Chocolate brown wrapper has a velvety sheen; it also has very fine tooth. Rolled firm, finished in a pigtail.
Draw: Real nice, producing a good quantity of smoke.
Pre-light flavor: The smell is sweet, fermented tobacco & horse barn; taste is the slight sweetness of graham crackers, a bit of citrus and earth – maybe mushroom?
Toasting & Light: Very earthy, lots of pepper; any smoke that gets up my nose is spicy.
Base flavors: Earth, red and black pepper, spice, and cocoa.
Retrohale: Woody with crisp spice, maybe a little floral.
Aroma: Dark – but somehow sweet.
Burn & Ash Quality: A clean, even burn leaves behind a dark grey ash.

The first thing I’ll say is that no corner was cut in making this smoke: the wrapper has this velvety sheen, and the leaf has such a super fine tooth to it. Firmly rolled, nicely packed, really well made; the pigtail is the chef’s kiss. 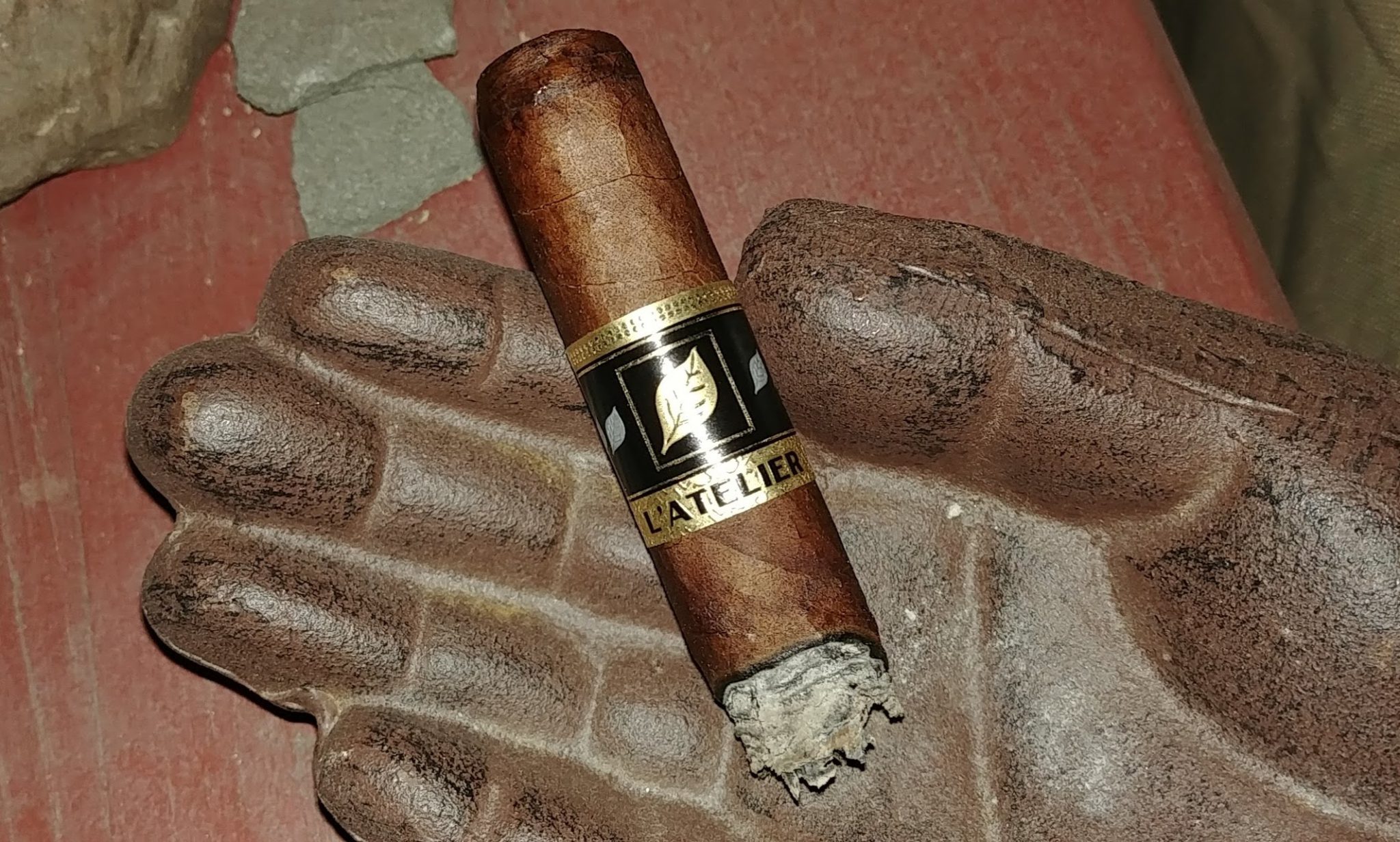 This L’Atelier offers a pretty emphatic opening: within the first half inch, the sensation of pepper is laying across my tongue and spice is making the insides of my cheeks tingle. Sweetness finally starts to creep in by midway – there’s a bit of cocoa and a taste of coffee. I wish they lasted longer; it’s not long before the smoke gets heavy with earth and pepper again. As the profile completes a full lap, there’s lots of smoke and full flavor to go around.

So is it right for you? If you smoke Tatuaje, it’s a no-brainer. If, however, you’ve held back on getting boutique-y with your cigar choices, but you know you like full flavored smokes with a lot of bite – then this is a nice pick for a change of pace from your regular fare.

Construction: Smooth with a matte texture in the hand. A little veiny and expertly pigtailed.
Draw: Even all the way through.
Pre-light flavor: Salty with hints of dried fruit.
Toasting & Light: Bread and dry wood.
Base flavors: Sweet earth, leather, grass, coffee (turning to espresso later), and baking chocolate.
Retrohale: Light peppers and quite smooth.
Aroma: Reminded me of burning wood in my fire pit on summer nights.
Burn & Ash Quality: Evenly layered with a marbled appearance. Two re-lights needed.
Balance of flavors: All of your palate is engaged from beginning to end.

It’s been a little while since I had an original LAT, but it’s a cigar that finds its way into my humidor often. Consistent, tasty, and well balanced – what’s not to like?

My sample had no draw problems and opened to dried fruit – maybe raisin – with salt on the pre-light. Dried wood and bread wiggled through my first few puffs, leveling out with a handful of flavors like leather, grass, coffee, and baking chocolate (on the finish). Like the original, the flavors appear to be consistent across both samples.

Apples to apples – the difference between L’Atelier and L’Atelier Selection Speciale:

A quick note for those who want to compare; L’Atelier Selection Speciale has less pepper and spice, but far richer flavors. Kind of like going from a hoppy IPA to a thick and creamy Doppelbock or Stout. The Speciale is simply easier on my palate and enjoyable for longer, even when I puff a little more often than I should. 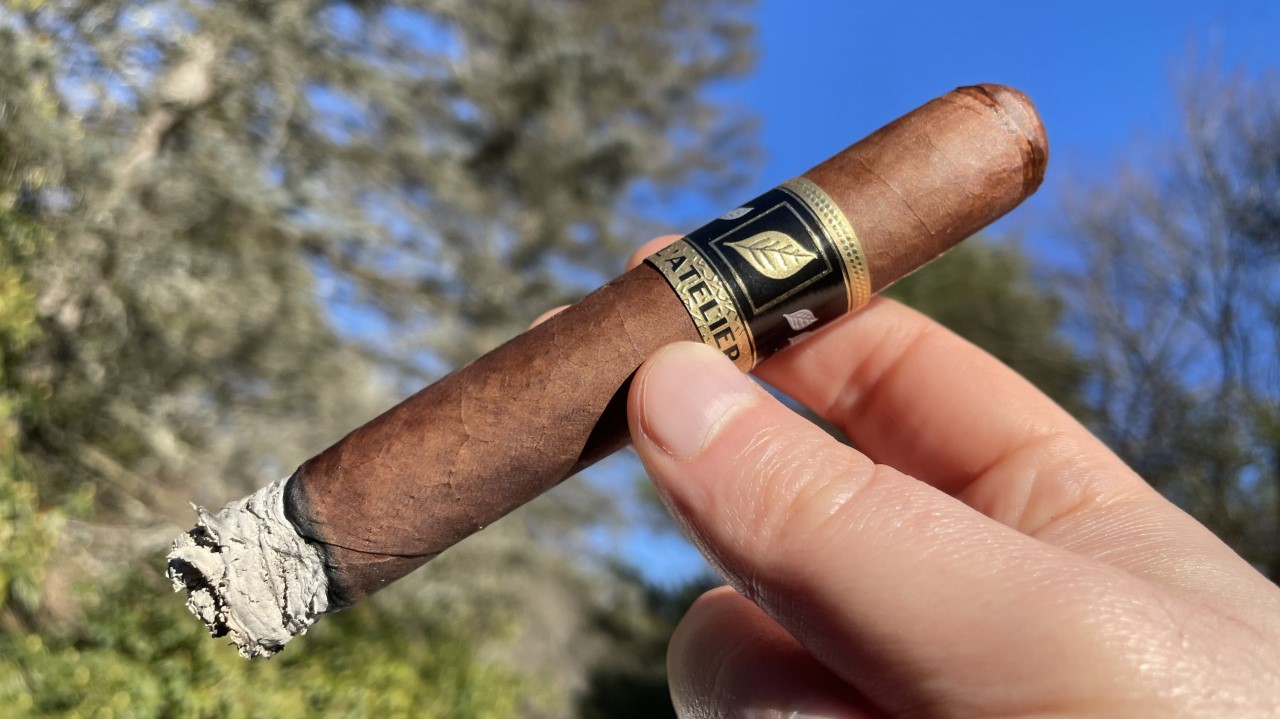 If you’re looking for pepper, it becomes a bit punchier by the end of the first third. I felt it in the back of my throat, but it was never uncomfortable. It was like having a spicy meal and the chef got everything right. Along with the pepper, a flavor that reminded me of buttered toast popped up and stuck around for another inch until the halfway mark.

Here, the coffee notes I experienced at the beginning are stronger, now leaning toward espresso. The pepper kind of comes and goes with hints of baking spice underneath it.

Brass tacks: Incredibly smooth, especially with its high-priming wrapper. If you’ve been looking for a full-bodied cigar that gives you all of the benefits of Nicaraguan strength, and none of the pepper bomb setbacks, L’Atelier Selection Speciale is an absolute must-smoke.

Reading Time: 2 minutes Three Qs, 3 As: watch our videos and learn about complexity, a cigar cutting trick and an interesting tidbit about how cigars are made.