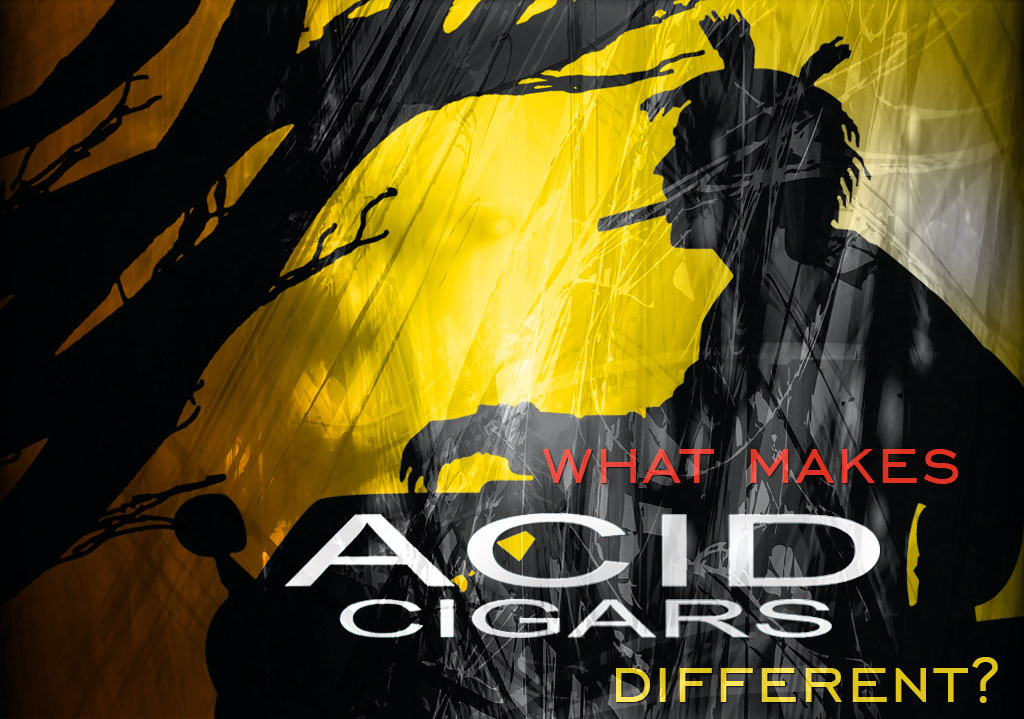 What makes ACID cigars different from all other cigars may not be as obvious at first sight. In their cellos they look like most other premium handmade cigars, though the band colors may be a bit louder than your average Macanudo. It’s when you take them out of their cellos or tubes that you immediately notice the difference. And unless you have absolutely no sense of smell, it’s as plain as the nose on your face. Each cigar is imbued with its own intense fragrance characteristics. To some of you who grew up during the 1970’s, they may remind you of the incense they used to burn in the head shops. The aromas in ACID cigars come from a special mixture chosen for each blend from over 140 herbal and botanical essences. Many have tried to replicate the Acid “blend,” but with little or no success, because the secret to Acid’s unique infusion method has never been revealed, and they intend to keep it that way.

It’s really amazing how many combinations they’ve come up, not to mention the success that followed since Drew Estate founders Jonathan Drew and Marvin Samel launched the brand. According to their website: “The two frat brothers from New York started out small… Small, as in a 16 square foot retail kiosk in the World Trade Center in NYC. In late 1998, Jonathan Drew moved to Estelí, Nicaragua with the hopes of starting a rebirth in the cigar world. With a handful of rollers and an even smaller handful of money, the story of “That Crazy Gringo” began. Imagine, going from a NYC apartment to sleeping on a mattress above a ramshackle factory, hardly knowing a word of Spanish too!”

Though “the rebirth of cigars,” was their motto, in 1998, Jonathan and Marvin had no idea that less than a decade into the new millennium the slogan would turn out to be prophetic. Nor did they expect that ACID cigars would create a cult following, the likes of which have only been seen in the music industry. For this reason alone you could say they are different from all other cigars in the premium cigar market. But it’s more than that…

In the cigar business, quality and consistency are King. The cigars are handmade using only choice Nicaraguan filler and binder tobaccos rolled in every variety of popular wrapper leaves including Connecticut Shade, Cameroon, Sumatra, and Connecticut Broadleaf Maduro. These are not to be confused with machine made cigars like Dutch Masters, the construction is first-rate, providing an easy draw, clean burn, and excellent balance at a reasonable price. The shapes and sizes vary in appearance from rustic to luxurious, plus the bands are color-coded to help you choose the Acid cigars that are right for you.

Acid Blue are mild to medium in body and highly aromatic, like the bestselling Acid Kuba Kuba, a smooth, mellow smoke rolled to a 5″ x 54. Acid Red offers a high intensity smoke like the Acid Nasty, a short pyramid rolled in a Connecticut Broadleaf maduro. The Acid Gold line offers even more distinctive aromas like Cold Infusion, a Lonsdale with a Connecticut Shade wrapper which is lighter in body. Acid Purple offers more complex, aromatic hybrids like Extra Ordinary Larry, a 6″ x 60 whopper brimming with sweet spice flavors. Because there are plenty of choices in each band color, it’s no wonder that many cigar smokers who have taken to Acid cigars go through almost the entire line until they settle on one, two, or more blends that they find consistently satisfying.

Moreover, because of the cult status the cigars have acquired, particularly with younger cigar smokers, each year the following multiplies by word-of-mouth, as Drew Estate continues to develop new Acid blends, or does something new with the packaging like the Acid G-Fresh series sold in “road trip-ready” bags of 5 cigars, individually presented in their own baggies.

Beyond the mainline Acid cigars, you have the Subculture selections. “Born from the ultimate expression of craft and art,” these limited edition cigars are made specifically for exclusive retailers, so no two Subculture cigars are alike. Priced reasonably, too, these custom-blended, small batch cigars are like manna from heaven for the die-hard Acid devotee. Of course here at Famous Smoke Shop we have our own Acid Subculture, the Acid Subculture Progeny, which has been extremely popular since it’s introduction.

Finally, there’s the Ambrosia selection, which could be called the “ultimate” Acid cigars. Two years in the making, they’re infused with exotic spices including cloves, plus additional spices used by only a few indigenous cultures who add them to their own native smoking tobaccos. Ambrosia cigars are so intense, they’re usually reserved for those who crave the most profound spice imbued smoking experience.

Though many smokers of “traditionally blended” cigars see them as a novelty, they are a far cry from whimsy. They have achieved cult status, and cost about the same as many of the finest mainstream cigars. As their co-creator Jonathan Drew says: “We can’t divulge too much about what our Acid cigars taste like. The fun part about smoking cigars is deciding what flavors and notes YOU taste while you’re smoking.”

[…] Acid cigars are the most unique brand of cigars currently in the market. This might not be obvious to an innocent observer especially while the cigars are still in their cellos. As a matter of fact, they resemble most of the premium handmade cigar brands in the market. One noticeable factor is the color difference which might be more vivid and distinct than the average cigar brands. […]

I was fortunate to have included some Acid samples (Red; Green & Blue) from Famous with an order I recently received. These Cigarillos are of a different world. They bring to mind a sense of affluence, reminding me of certain tastes through smells of the likes of new homes, cars, leather, and just fond memories. I like the cigarillos, and thus far I’m leaning towards the “Green” for a start to finish delicious experience. I believe I will be putting these on my list for monthy ordering. They are a great change on occasion from the great and other fine blends.

I was given a Blonde gold rapper short cigar the first taste of before lighting it was very interesting. Almost sweet but not sweet. The taste was refreshing. The smoke was very full body and it burned well. I continued to to mouth the cigar afterwards to in joy the tobacco tastes. Great little cigar. At 69 years I will be a customer. Thank you. Bob Smith from Cigar City, Tampa Florida

Just try my first one and I love it Big time

Read More
Cigar Buying Guides
Need a winter warmer? This week, our top new cigars all hail from one of Nicaragua's new sources of boutiques (including one of the top cigars of 2017): see what's on the must-have list from Casa Fernandez in this first-of-the-year edition!
Read More

History of the Cigar Girl