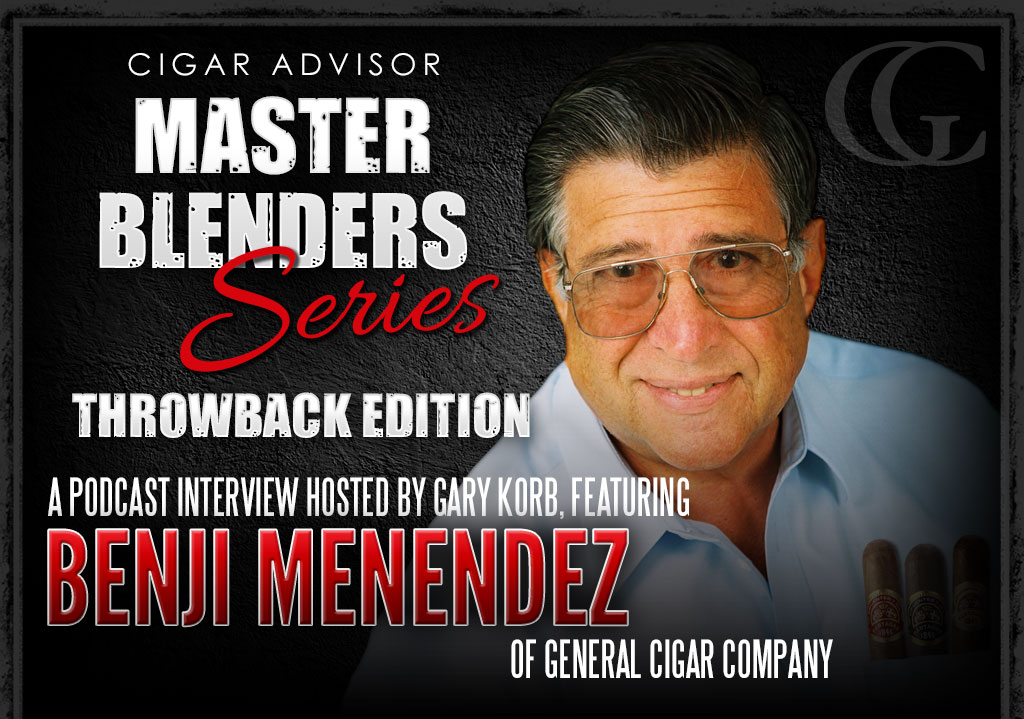 During the 2006 IPCPR Trade Show, Gary Korb got the rare opportunity to interview one of the most esteemed personalities in the cigar business – master blender, Benji Menendez. Yet, for some reason he never got the chance to post it and it disappeared. Recently, while cleaning-up some old files, he found the interview. Although it’s a bit dated in some respects, most of the interview is Benji’s remarkable story from his life in Cuba to his success with General Cigar. We think you’ll find his story very interesting.

In July of 2006 I attended what was then called the RTDA (Retail Tobacco Dealers of America) Trade Show. (Today it’s the IPCPR.) General Cigar publicist, Victoria McKee Jaworski was kind enough to arrange an interview for me with the legendary Benji Menendez. The three of us met one afternoon in a private room behind the trade show floor, and I recorded Benji on a small digital hand recorder. Benji sat across from us smoking a Partagas Cifuentes Winter Blend cigar, which he helped develop. It was also one of General’s new releases that year. Benji is the avuncular type; a man with a kind smile, comfortable in his skin, and as I found out, eager to talk about his life and career.

Born into a tobacco family in Havana, Cuba in 1936, Benji Menendez says, with a smile, “Tobacco is in my genes.” His grandfather, father, and uncles were considered the royalty of the cigar business during the pre-embargo heyday of Cuban cigars, having developed such world-class brands as Montecristo, H. Upmann, and Por Larrañaga.

The interview begins with Benji talking about life in Cuba. What he says is actually quite timely considering the current unrest in Nicaragua and the issue of U.S. immigration.

Before retiring in December of 2013 at age 77, Benji was General Cigar’s senior vice president of premium cigars. He worked closely with the company’s manufacturing organization on the development of new brands and served as a sounding board on product quality for such leading premium handcrafted brands as Macanudo, Cohiba, and Partagas.

Among the cigars General Cigar was releasing at the time of the interview were the Partagas Cifuentes Winter Blend, Partagas 160 (both now obsolete), and Cohiba Black – and Benji’s loyalty to those brands come through loud and clear. He also touches on why cigars are no longer made in the Canary Islands or Jamaica, as well as what happened to the once, very popular Montecruz cigars.

In 2009, he debuted his own cigar, the Partagas Benji Menendez Master Series; a limited edition release rolled in three sizes – a 7″ x 49 Prominentes, a 6″ x 54 Toro LX, and a 6″ x 46 Majestuoso. Rolled in a vintage Cameroon wrapper, Benji described his namesake cigar as “one of the most significant blends I have ever been involved in developing.”

Even today, Benji continues to be talked about by practically every cigar business luminary, not only as a cigar master, but as a sage. Whether he was on a tobacco plantation, in a cigar factory or an executive board room, when Benji was sharing his consummate knowledge he could hold any audience captive.

Anyone who’s been smoking cigars as far back as the 1990’s, or longer, will get a kick out of hearing Benji talk about the Cigar Boom years, and will be surprised about what he says regarding “the future” of the cigar industry. Moreover, younger cigar smokers will get an up-close and personal view of the business, including how to choose the right cigar and much more.

Listen to the interview here:

Great, interesting and informative interview. Kudos to you people

Thanks for the comment. Glad you liked it. G-~

2018 CA Report: How to Build a Well-Rounded Cigar Collection in 3 Easy Steps