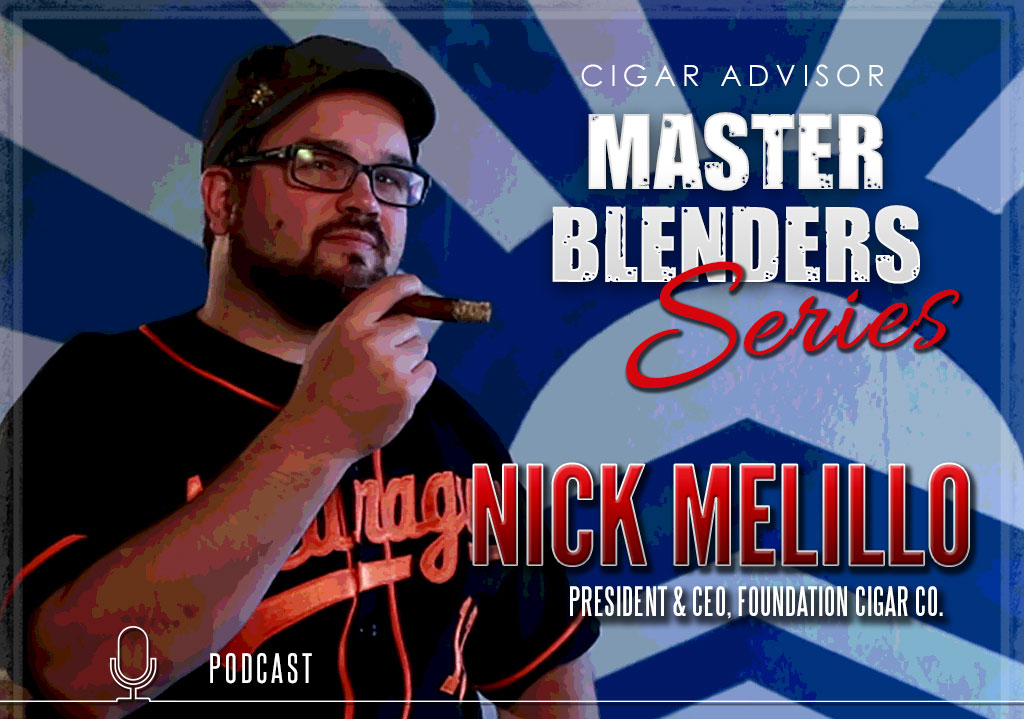 Although I was quite familiar with his cigars, I had never met Nick Melillo until this podcast, but once we started talking I felt like I’d known him all my life. He’s one of the most charismatic people in the business, and one of the most passionate about what he does. This interview was a little less formal than my usual podcast, which made it even more enjoyable, and I think you’ll find hearing what Nick has to say about his work ethic, tobacco farming – especially Connecticut-grown tobacco, the Highclere Castle project, and more, both lively and entertaining.

As an honor graduate of Quinnipiac University’s International Business school, the conventional path for most graduates wouldn’t necessarily lead to a gig at a local cigar store. But then, Nick Melillo isn’t a conventional kind of guy, and from 1996 to 2000 he ran the Calabash Shoppe in Hamden, CT, where premium handmade cigars were the order of the day. Moreover, he learned the cigar business from the ground up.

In 2000 Nick spent the next three years doing everything from helping tourists on pilgrimages to Rome, to backpacking through the heart of Europe, to being a Renaissance art history tour guide, and finally, on to Asia. But there was one spot on the map he hadn’t yet set foot upon – Central America.

In 2003, Nick moved to Estelí, Nicaragua for what most cigar smokers would envy as the ultimate dream job – working for Drew Estate Cigars. Working alongside Jonathan Drew, Nick had a hand in practically every area of the business combining two of his great passions – handmade cigars and international business – and he eventually became the company’s Executive VP of International Operations.

Fast forward to 2015. Nick founded the Foundation Cigar Company, also based in Estelí, and began using his expertise to create high-quality, premium handcrafted cigars built “with heart and soul.” Nick’s knowledge along with his relationships with the leading tobacco growers worldwide has allowed him to build a solid stable of brands that cover a wide range of blends from the critically-acclaimed El Gueguense (The Wise Man) line, to the Charter Oak selection, which symbolizes Melillo’s home state of Connecticut, to the Tabernacle selection, which he calls “Chief of the Broadleafs,” to his infused The Upsetters, selection, to one of his most inspired creations, the Highclere Castle selection.

Using the most select tobaccos to ensure a rich-tasting, well-balanced, and flavorful smoke, every Foundation cigar is made in the spirit of providing the best handmade cigars to cigar enthusiasts around the world.

Listen to the podcast here:

I met Nick last year, up in Edmonton, Alberta, Canada at a small cigar event. He share a ton of stories and gave a cigar 101 talk…and yes, great passion, great knowledge and a treat to meet. Felt as though I gained a cigar friend thru the meet. Loved his passion for cigars and thoroughly enjoyed the evening.

Reading Time: 19 minutes My Father Cigars are well-known for making cigars that are packed with big, full body and flavor. If you want in-depth coverage of the entire My Father lineup, and want to learn more about this iconic Nicaraguan brand – read this Advisor guide to get reviews, tasting notes and more on 14 of Don Pepin’s finest premiums!