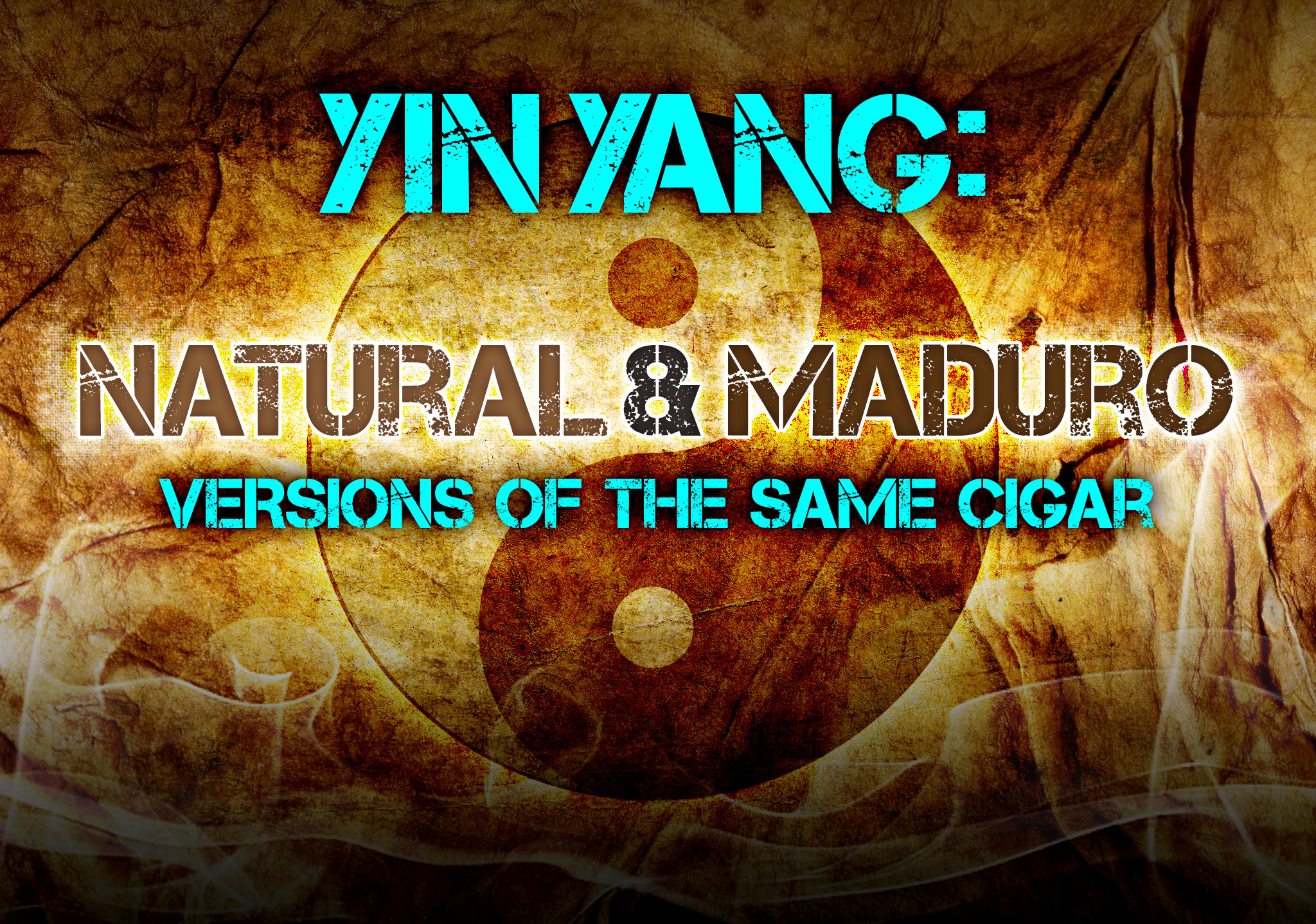 The Yin & the Yang: Cigar in Both Natural and Maduro Wrappers

We examine 5 cigars, each with different wrappers.

Natural and maduro have become the yin and the yang of the cigar world. Dark vs. light, good vs. evil. How about tasty vs. tastier? Maybe you love maduro cigars. Maybe you’ve shied away from them for one reason or another. But considering how much difference in taste just one leaf makes, it’s the wrapper that can make or break a blend. Don’t believe it? I think it might be time to try what it is you’ve been avoiding.

It’s for these reasons why so many bypass the natural wrapper version of these cigars for their extra-fermented kin; it’s also why some other smokers don’t want to walk on the dark side. It all depends on what you like.

In reality, most maduros function to make a smoke more mellow – it’s not alchemy, it’s sunshine and plant stuff. In a nutshell, wrapper leaves that will become maduro are generally stalk-cut, though some are primings from the top 2/3 of the tobacco plant. The higher and more-ripened by the sun they are, the thicker and oilier these leaves end up. Once the leaves are into their intense fermentation process, the leaves turn that rich dark brown…and interestingly, turn milder.

Maduro has a flavor range of its own, from sweet to bitter. But if properly aged, a good maduro will be smooth – so it’s not the wrapper that makes ‘em strong, it’s what’s inside. And that’s why many cigar makers will put out a natural and maduro version of the same cigar: cloaking the same blend in a lighter or darker leaf will achieve a whole different set of tastes, with just that one change.

To really recognize the difference, a tasting is in order – so I’ve lined up 5 cigars, in both their natural and maduro forms, so we can see the difference. Let’s sample!

Just one among many of his top-rated blends, it’s the Edge that’s been making good on Rocky’s full-bodied smoke juju for over 10 years. It was hailed as an instant classic: thick with aged Corojo and both Nicaraguan & Honduran ligeros, the Edge is hearty both inside and out with a big dash of peppery goodness – and it’s remained that way ever since, a testament to this cigar’s consistency (and its bestselling status). The wrapper is a Honduran-grown, Cuban-seed Corojo…which means you’ll find much flavor and complexity inside this one.

And now for the Edge’s brother from another mother. As is the original, this smoke is robust, to be sure – putting its big boot in your chest with the same spicy, ligero-rich recipe and cloaking it in a near-ebony wrapper that hails from Costa Rica. But as a good maduro does, it adds complexity by pouring on big and dark flavors without hesitation. Still full and still the Edge, but the extra fermentation given to the Costa Rican wrapper reveals a smooth (but not dull) smoke, and an added aromatic experience.

If you haven’t been privy to the satisfaction of nubbing Perdomo’s 20th Anniversary cigar, here’s the lowdown…Nick uses all-Nicaraguan tobaccos, sourced from his own farms in all three of the most fertile tobacco growing areas: Esteli, Condega and the Jalapa Valley. “The highest priming reveals the richest results,” he says – meaning the leaves closest to the top of the plant, which have soaked up the most sun (and transformed it into flavor), are best for pumping out a tremendous smoking experience. Then, Perdomo’s black magic: the wrapper leaf is bourbon barrel-aged for an additional 14 months, perfectly timed to achieve its peak in both flavor and color. This is an impeccable smoke from start to finish – hence, the nubbing I mentioned earlier.

So, we’ve established that Perdomo’s 20th blend is full-bodied and layered in full flavors, due to culling the leaf from high atop the plants grown in Nicaragua. Now…smoke it again, and see what a maduro wrapper does to that mix. Barrel-aged in the same method as the natural wrapper, then draped over the top of an all-Nicaraguan mix, there are even more tasting notes to be discovered. This is, without a doubt, a celebration cigar, as Perdomo has blended a stunner in the 20th Anniversary maduro. And the people have responded, giving it ridiculously high ratings, too.

La Gloria Cubana Serie R cigars, in their natural wrapper version, exhibit wicked full body thanks to a blend of Nicaraguan Ligero and Dominican Olor. Complexity abounds through its well-aged Sumatra wrapper, smacking the palate relentlessly with both flavor and aroma. Oh, Serie R is a powerhouse, alright – but the strength and spiciness is tempered by rolling them in bigger ring gauges. So if big, beefy and bullish sounds like your sweet spot, then you’ll be hard-pressed to find a fault in these Serie Rs.

The counterpart to La Gloria Serie R’s Ecuadorian Sumatra wrapper is a mainstay among maduros, U.S. Connecticut Broadleaf. It’s a stalk-cut leaf (as opposed to primings) that’s well fermented for more flavor, as if that was even possible. The rest of the ensemble remains: Nicaraguan and Dominican long fillers, plus a Nicaraguan binder. Big in spice but now big on smooth in its maduro form, Serie R Maduro really still is one of those cigars that is more powerful – but also somehow sweeter – than its Sumatra-wrapped sibling, despite its sinister look.

Ahhh, Padron…those that enjoy them do so with more of a lust – but if you haven’t had the opportunity, here’s a really good spot to try out your taste buds. The Padron Series is all-Nicaraguan tobaccos grown from Cuban seeds, aged at least 30 months, then finished in a rustic, deep oily brown Nicaraguan wrapper. And by rustic, I mean ragged – it ain’t winning any beauty contests. Padron falls more to the middle of the strength meter (medium), and features consistency and quality way more than its price tag shows. And that’s where the lust comes in: smoky and flavorful, Padron has a very unique flavor all its own – and has earned a legion of followers.

Now, the challenge: it’s damn near impossible for even the most rabidly enthusiastic Padron fans among us to tell the difference between the natural and maduro selections – before lighting them, anyway. You almost have to put them side-by-side, which reveals the maduro to be slightly oilier, slightly darker and even a bit rougher looking than the natural. Barely. Add flame, and the maduro traits become clearly evident, and that’s where the shouting match begins. Some argue that this blend shines best in maduro, saying that the wrapper is what ties everything together in the Padron recipe; others say that it overpowers the fillers with its cocoa-y sweetness. But that’s what makes this hobby of ours fun. Compare natural and maduro Padrons, and judge for yourself.

In contrast to the Padrons, probably the widest gap between blends is this AJ Fernandez 2-fer…San Lotano Connecticut cigars are a great entry point for mild cigar smokers to get access to AJ’s private stash of tobaccos. The blend features premier Nicaraguan and Dominican fillers and a Honduran binder; but the special sauce in this mix is the Ecuadorian Connecticut wrapper, dripping with more flavor than a CT cigar should have. Smooth & creamy win the day here – at least, until you want to spice it up a bit.

And spice it up we will. San Lotano Maduro cigars are a significant departure from their mild-mannered kin, a fuller-bodied yang to the Connecticut’s yin. The only real difference in the blend is the Honduran long fillers that have replaced the more easygoing Dominican leaf – and finished in a San Andres maduro, the creaminess of the original is amped and sweetened to nom-worthy proportions. As expected, it’s got big-time flavor…because that’s just what AJ Fernandez does. San Lotano Maduro is one of the few outliers where darker really does mean stronger; but in this case, it means more complex, too.

I hate the term “flavor bomb,” I really do. But some instances demand I use it; this is one of those times. Inferno Flashpoint cigars, the second in the line from Oliva, sport a mighty center of estate-grown Nicaraguan ligero that’s been brought in check by a healthy dose of tasty Nicaraguan tobaccos sourced from the Jalapa Valley. The whole shootin’ match is then rolled in a sweet n’ toothy Sumatra leaf. Medium to full, it’s understandable why so many people like this cigar – there’s very little you can do to it to make it any better.

OK – take everything great about Inferno Flashpoint I just mentioned, and wrap it in a Mexican San Andres maduro wrapper. Just…yeah, wow. Where the original taps its fingers on the table to match the beat, Flashpoint Maduro pounds the Flavor Drums with reckless abandon. Maduro fans will enjoy the natural sweetness that Mexican maduro has to offer; if you’ve had the original flashpoint and want to take a step in this darker direction, it’s the creaminess – without having to arm wrestle the spice – that seals the deal on this Oliva cousin.

Reading Time: 4 minutes You’ve passed cigar boot camp – now it’s time to go all in on your first box. So many choices…so little time. We make it easy with our five first cigar box buys worthy of pulling the trigger.