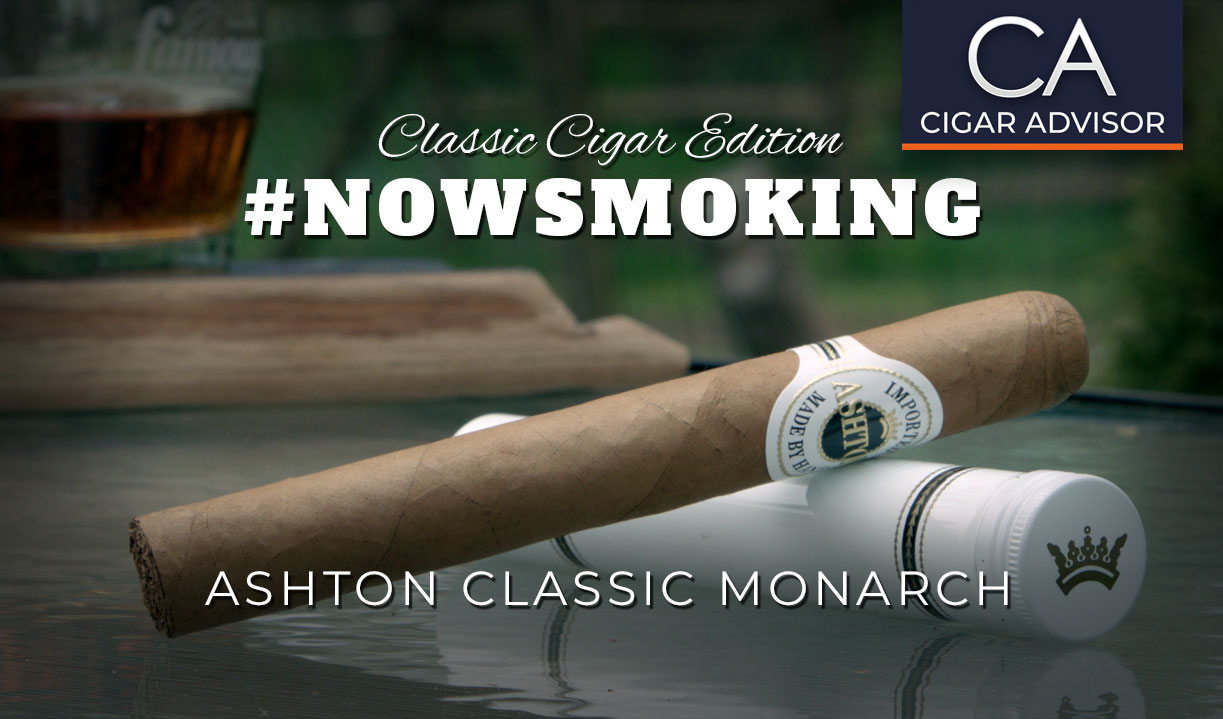 Presented in Boxes of 24 Tubos, 5-packs and singles.

The Ashton Classic Back Story

Ashton Cigars were founded and created by Philadelphia cigar company owner Robert Levin in the early 1980s. Levin learned the retail side of the business working with his father, and eventually took over the business in the 1970s; eventually, Robert’s vision included creating a cigar he could call his own. 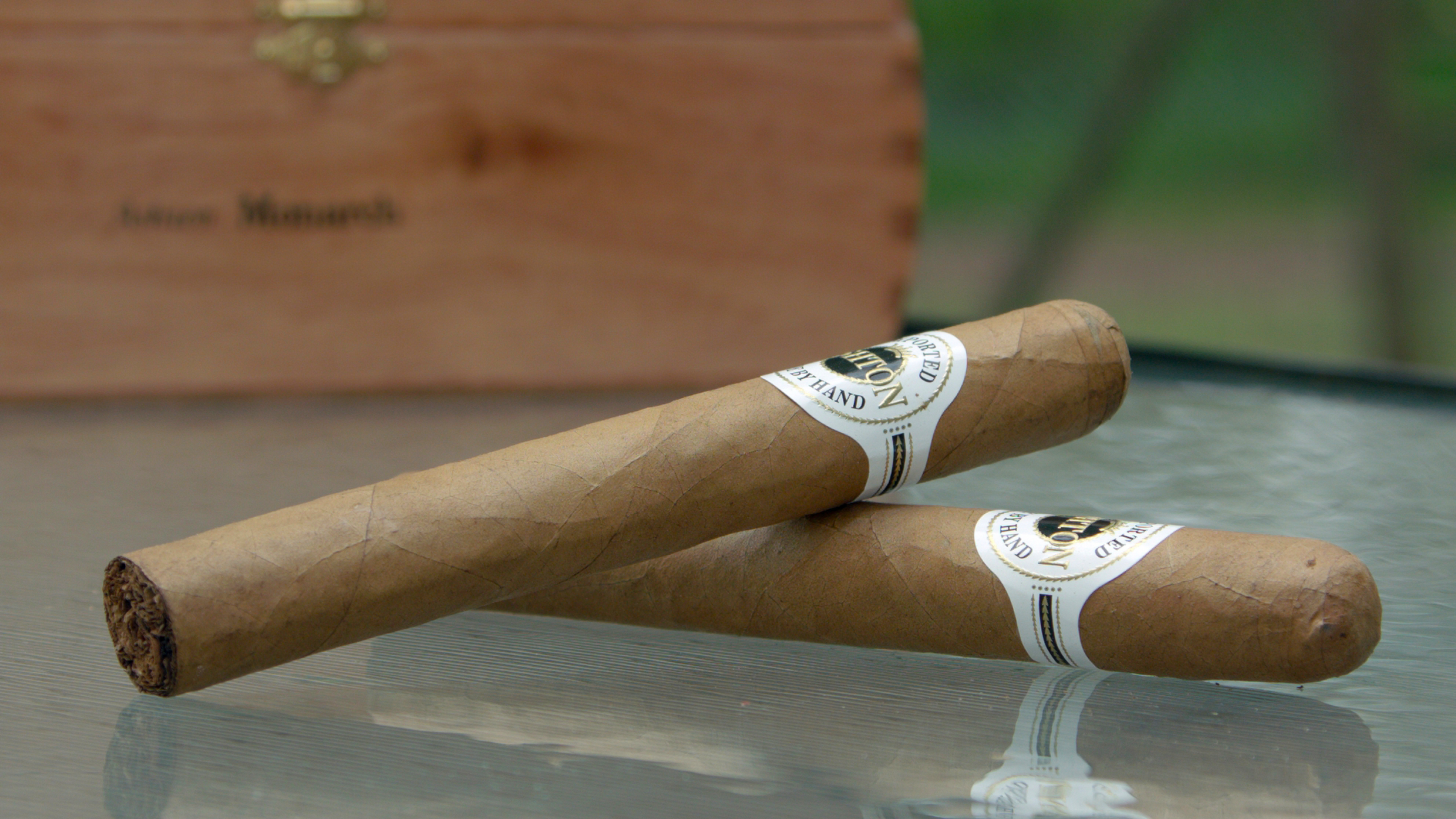 Working in collaboration with Carlos Fuente Sr. and Carlito Fuente Jr., the first Ashton cigars made their debut in 1985. Handcrafted in their Tabacalera A. Fuente factory in the Dominican Republic, Ashton featured Fuente’s most fully-aged tobaccos from their Dominican estate farms topped with plush U.S. Connecticut Shade wrappers. By the time the Cigar Boom 90s arrived, Ashton was perfectly positioned to be a success. The Boom not only helped popularize the Ashton brand even further, it legitimized it among the cigar cognoscente, placing Ashton among the world’s top luxury-class cigars. 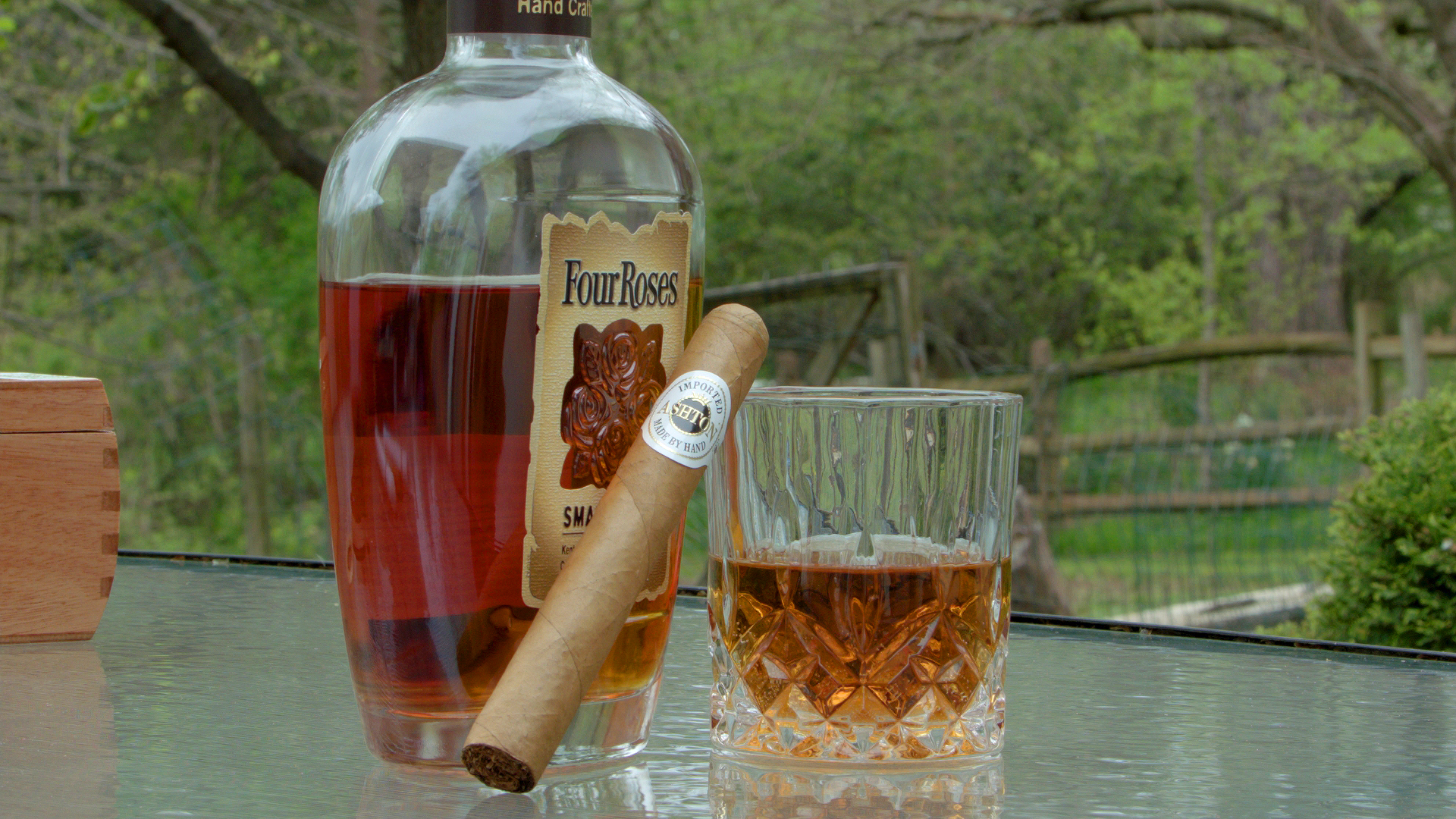 With the Ashton brand becoming so successful with consumers, plus all the high tasting scores, the Ashton stable expanded as the tastes of cigar smokers evolved into a desire for more complex and bolder cigars. Ashton Classic was followed by Ashton Aged Maduro, Ashton Cabinet, Ashton VSG, ESG, and Symmetry, among others. As a result, Ashton cigars have been a perennial “Top 3” brand in the U.S. for more than thirty years and is now sold in over 60 countries.

Construction: Presented en tubo, the Ashton Classic Monarch is seamlessly rolled. The wrapper is silky, blonde, devoid of obvious blemishes and veins, and even in color throughout. The body feels firm, showing no signs of soft spots either. The triple seam cap is perfectly applied, and practically pops off by itself in a perfect circle using a double blade cutter.
Draw: Perfect. The pre light flavor is a combination of herbal and tart flavors.
Toasting and light: The first few puffs of this are absolutely wonderful including some nice nuttiness, and a marvelous cream flavor. And I’m talking real cream. It’s also very mellow in the truest sense, with just a little hint of sweetness, But the smoke aroma is also in there and very sweet.
Base flavors: Cream, roasted nuts (almond-like), oakwood, herbal spice.
Aroma: The scent off the wrapper has a light grassy smell, while at the foot, the aroma is somewhat herbal with a sweet grassiness. The smoke is especially fragrant, relaxing, and reminded me of burning autumn leaves.
Retrohale: Smooth and slightly herbal.
Burn & Ash: Perfect. The cigar burns evenly at a nice rate with a firm, salt & pepper ash that reveals an attractive cone shape when tapped. 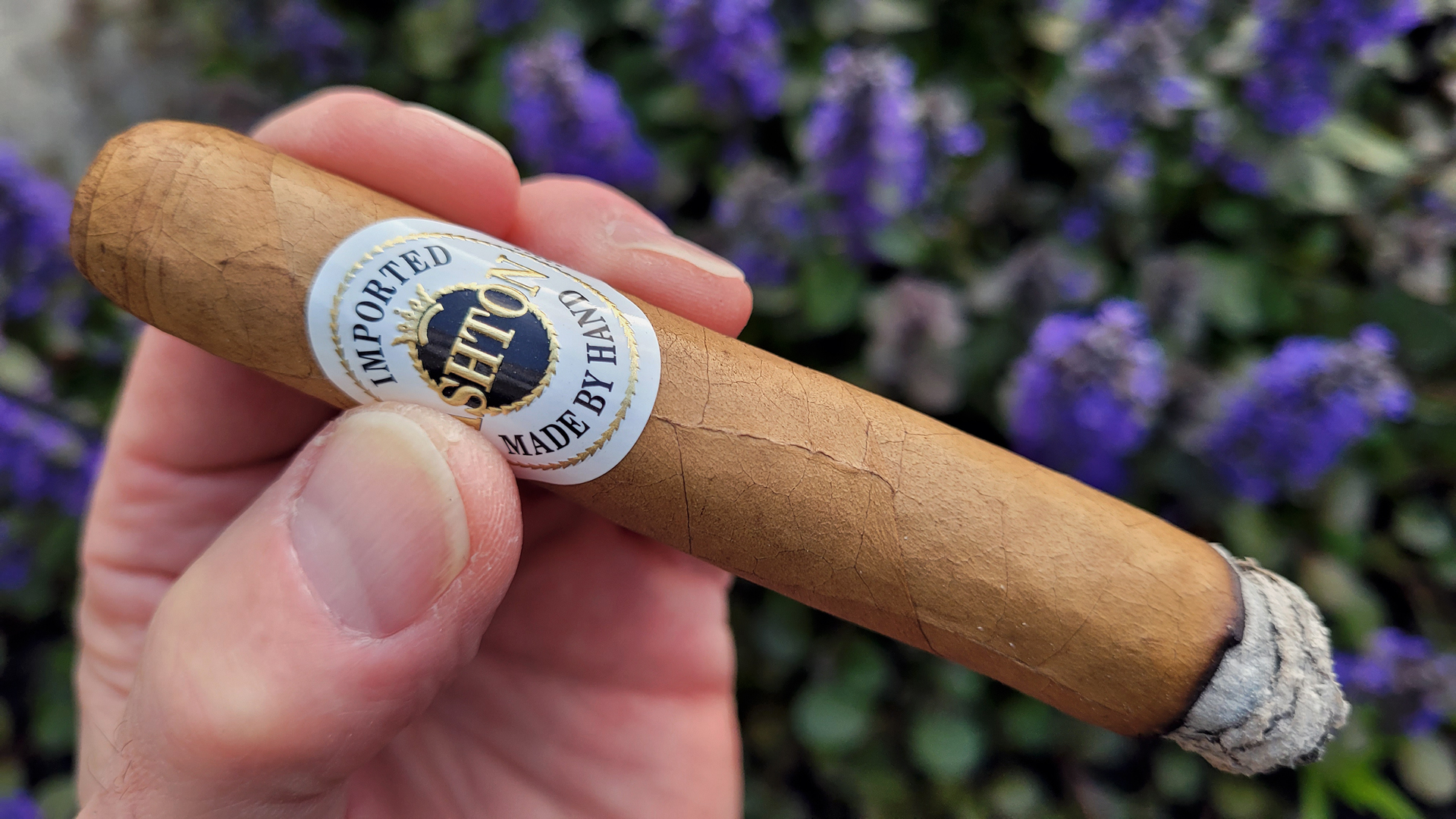 This Ashton Classic Monarch starts out amazingly smooth, mellow, and creamy. It also offers a very relaxing aroma, and a lot of it, too, from the get-go. To me it smells a little like autumn leaves burning, and has a smoky layer to it. The ash is a bit flaky at this point, but it’s forming a nice cone.

The body is mellow-medium at this point, but very flavorful, but I’d put the strength closer to medium. So far, it has an appealing and quite dominant almonds, oak, and cream flavor. So far, a very relaxing smoke that hits you with a whole mess of goodies right out of the gate. 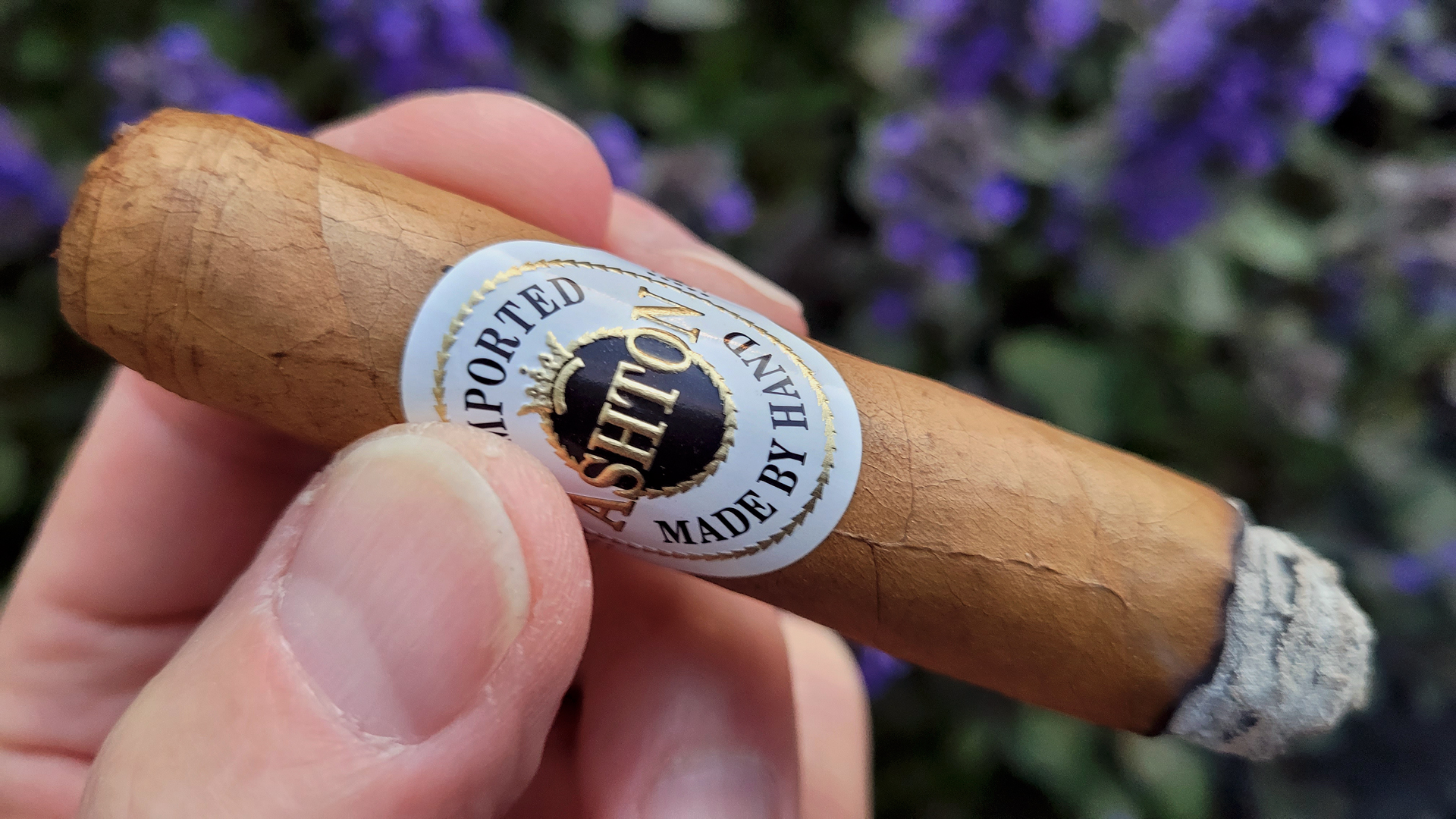 I’m picking up a little sweetness here. It’s not so much coming from the smoke as it is from tobaccos at the cigar’s head. Even thought they don’t specify what specific tobaccos are used in the blend information, if you’ve smoked enough Dominicans over the years, you can tell these are prime, long-aged tobaccos. You can also tell the wrapper is perfectly fermented and aged. It is totally devoid of any bitterness. The cigar also continues to burn excellently, and the flaky ash I noticed at first is now quite firm, revealing ashes with a cone-like shape. 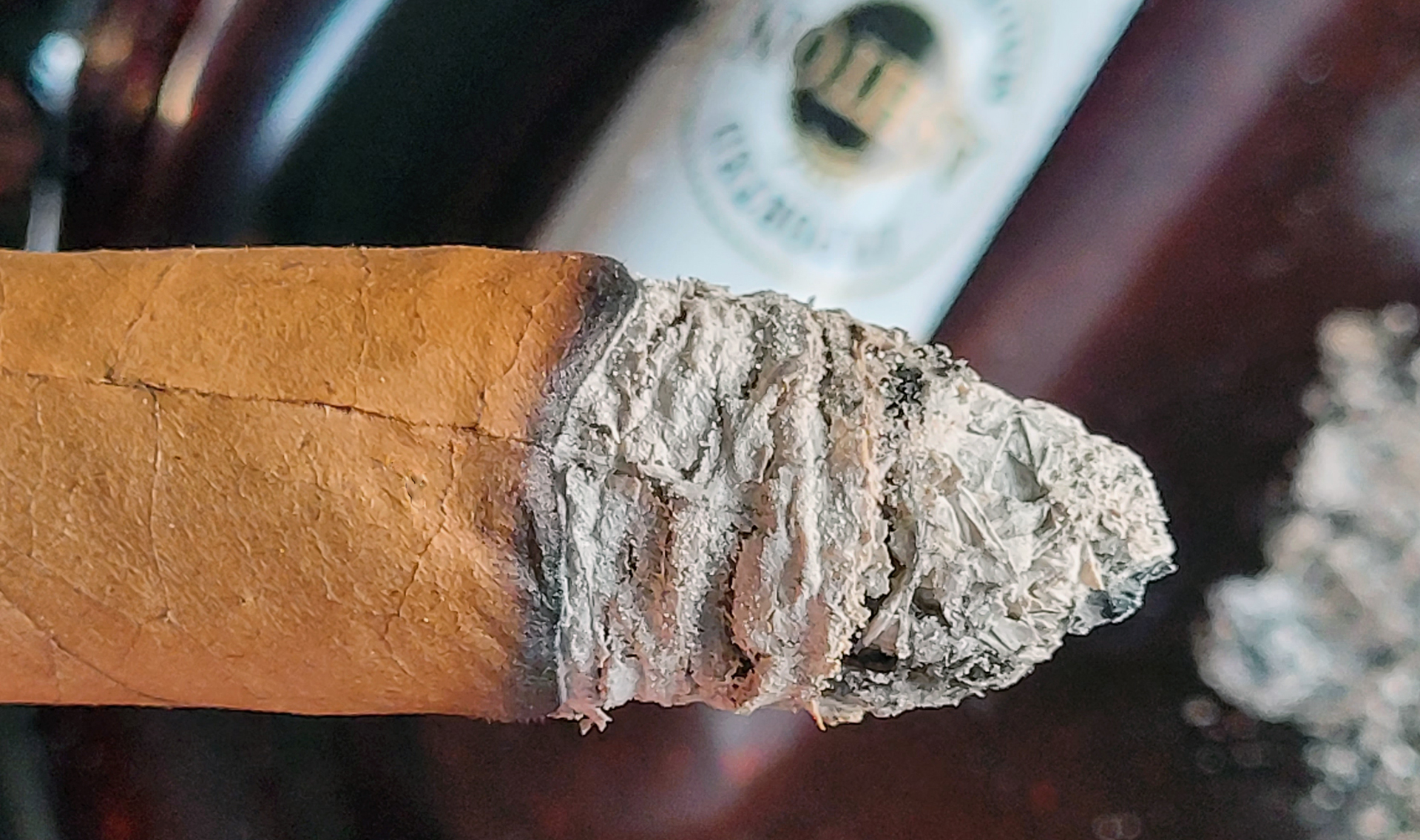 The body appears to be expanding somewhat, while the smoke is still rich, well-rounded and creamy with notes of almond, cream, oak, and hint of spice, plus that wonderful aroma from the smoke. So, at this juncture, the flavors, smoke, burn, everything is perfectly balanced and quite soothing, too. 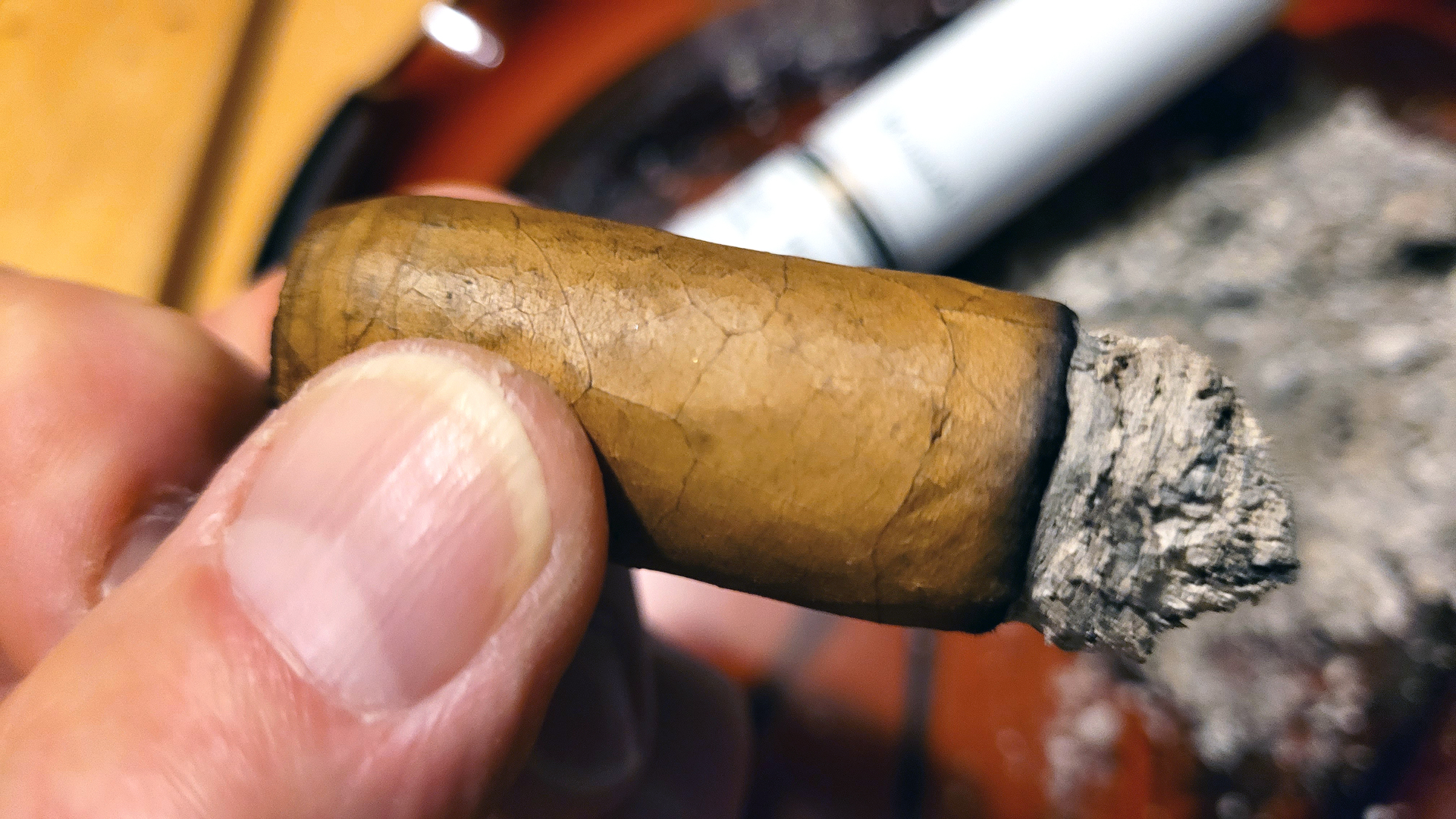 At this point the body is now more medium-plus. I’m picking up what tastes like a slight note of ground coffee. Meanwhile, the Monarch has left a lot of chunky ashes in the ashtray, and remains nutty, smooth, and fragrant. Down to below the last two inches, it starts to get a little tart, which told me, know when to put this cigar down. Stay too long at the party and it may sour on you. Yet, for the most part the Ashton Classic Monarch rules with extreme benevolence.

What can I pair the Ashton Classic Monarch with besides coffee? 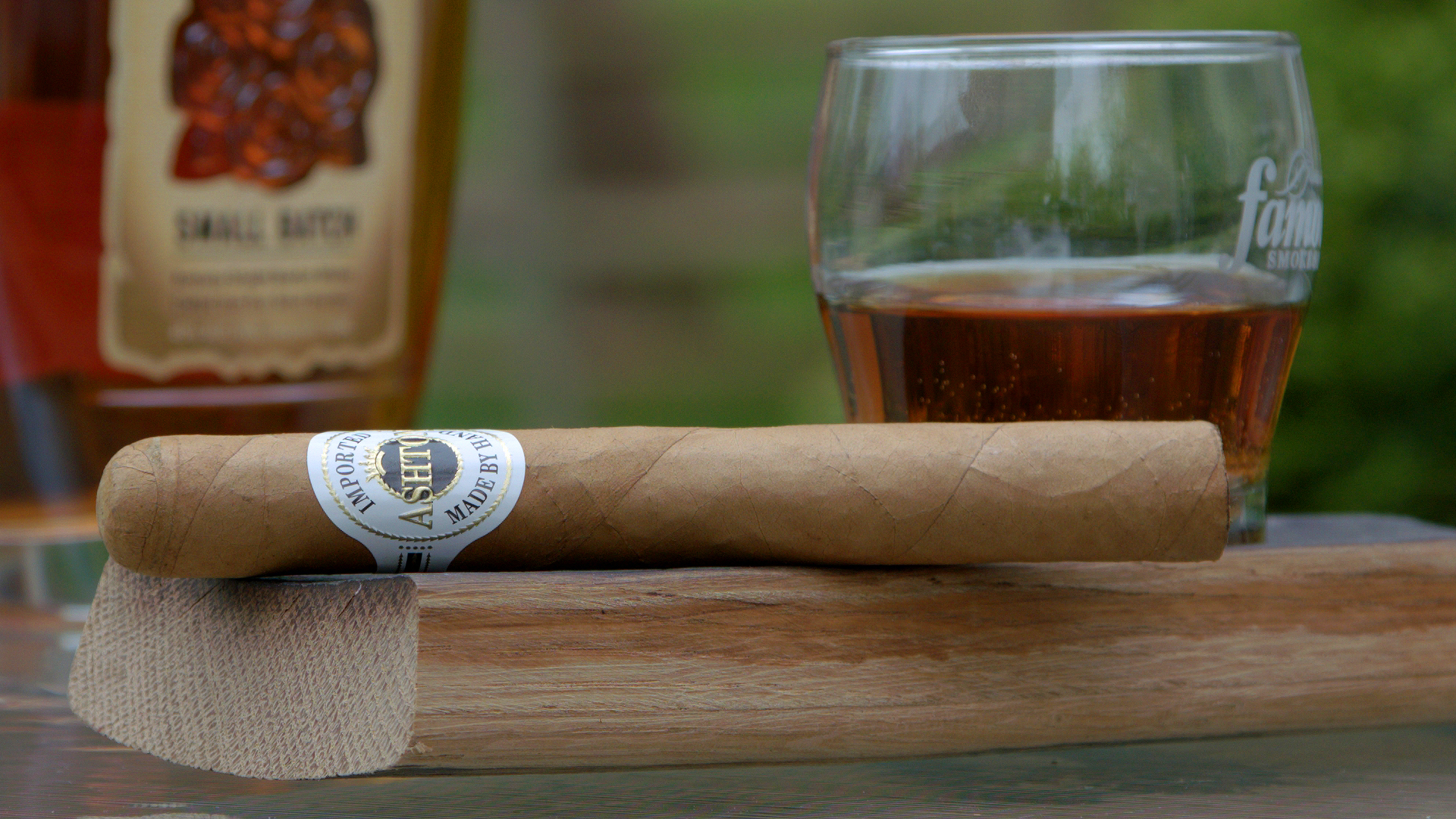 Our pairing expert recommends Four Roses Small Batch Select. Here’s why: Four Roses Small Batch Select blend six to seven-year-old bourbons bottled at an ABV of 52%. Full-bodied and creamy, aromas of cookie dough, candied apples, milk chocolate, and orchard fruit are revealed, while offering a mellow, refined bourbon whiskey. I can also see having the Monarch with a fine brandy or cognac. 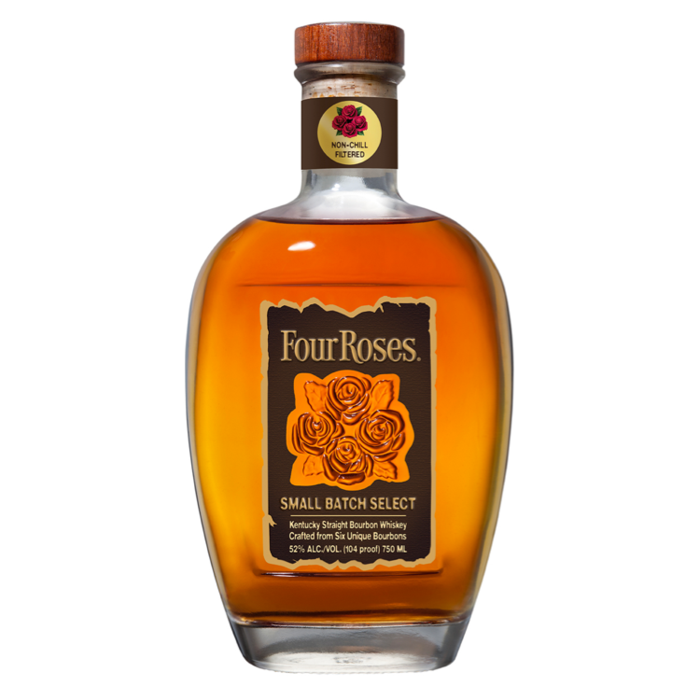 We always talk about how relaxing cigar smoking is. Well, Ashton Classic Monarch is the poster cigar for relaxation. It’s impeccably made, offers perfect balance and a set of flavors and aromas that have a way of flipping your stress kill-switch. It’s also complex in the sense that it starts out mellow and creamy, then builds in body as the flavors become more defined; then finally, you have this very refined, full-flavored smoke that’s still amazingly creamy. By my definition, another perfect cigar that’s also downright seductive. 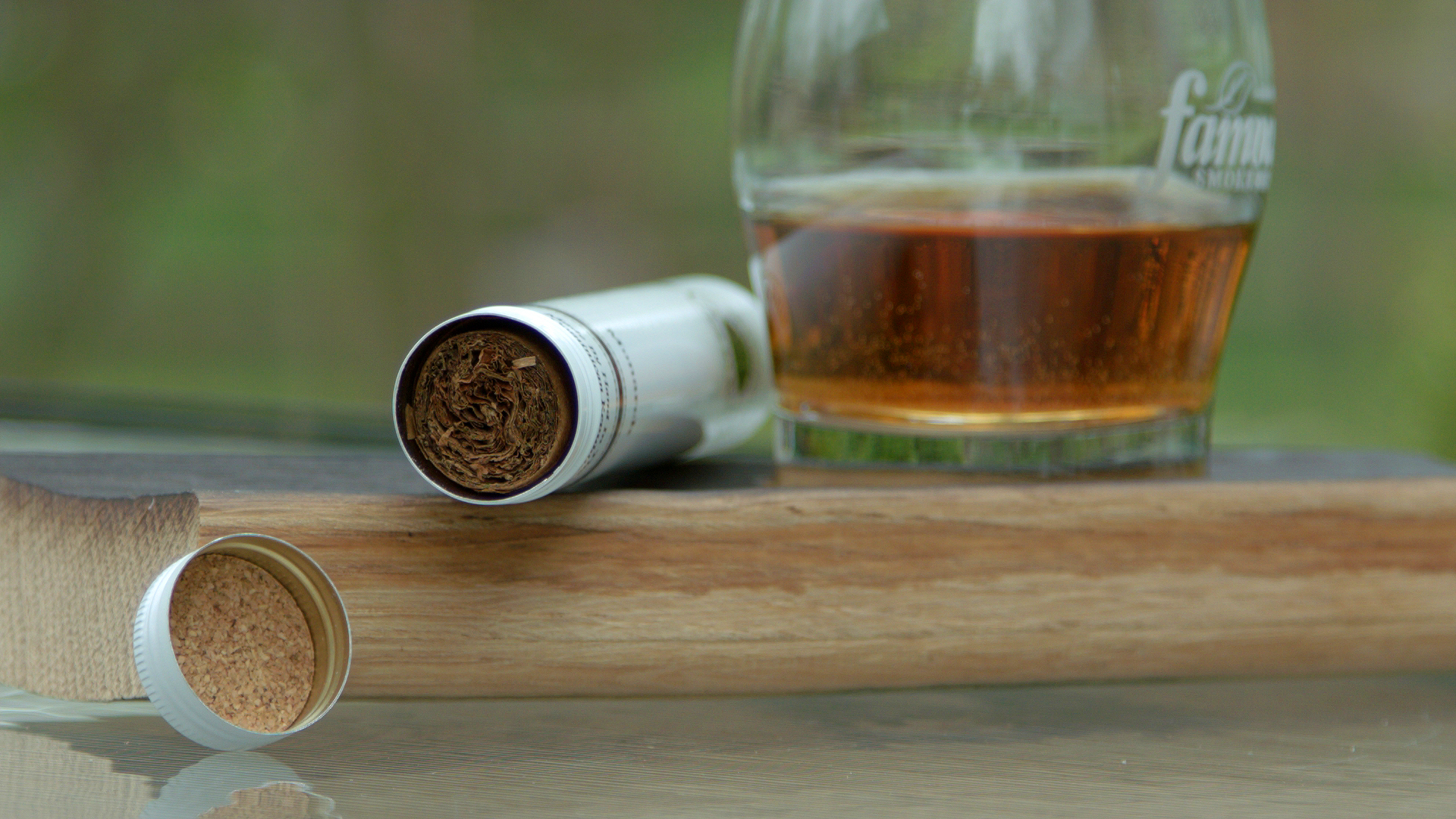 The Ashton Monarch is a good choice for any cigar smoker, especially if it’s their first Ashton, and that also goes for those who are just getting into cigars. If you prefer more full-bodied and complex cigars you may be better off with the Ashton Virgin Sun Grown, or Estate Sun Grown. But it wouldn’t hurt to keep a few Ashton Monarchs in the humidor.

If you’ve had the Ashton Classic Monarch, or plan to smoke it soon, please let me know what you thought of it by leaving a comment.

Reading Time: 2 minutes The days may be cold, but the cigars are still hot, so we’ll focus on two new arrivals from Alec & Bradley and La Aurora. Check out what you can expect from them in these first-look reviews!