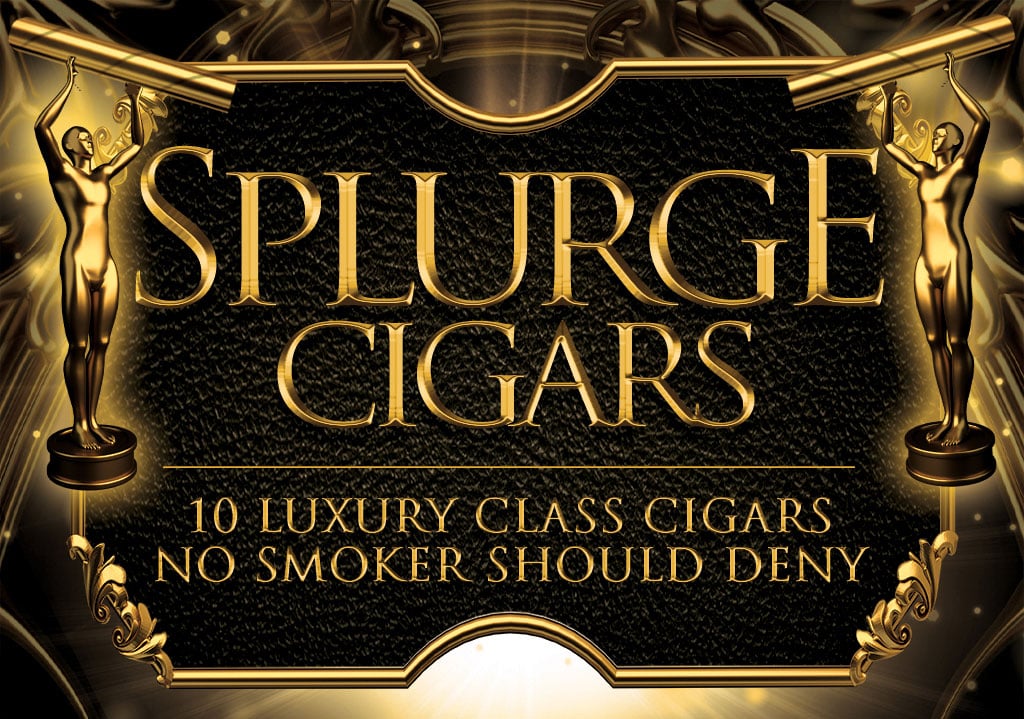 Generally speaking, cigar smokers tend to be rather, shall we say. . .”thrifty.” Not necessarily in all things, but when it comes to buying premium cigars, the idea of spending anywhere from $10 to $20, or even more in some cases, is hard for the average cigar guy to wrap his head around. Come to think of it, many don’t even like paying $4 for a decent smoke.

The question is, are those luxury class cigars – you know, the primos – really worth their upmarket prices? Yes and no, since a 95-rated cigar that costs $15 may be worth every penny, or it could fail miserably for any number of reasons.

Speaking from my own experience, almost all of the so-called “luxury cigars” I’ve smoked pretty much lived-up to their reviews. There was one exception, however – a $19 Toro from a very distinguished brand, too. Since it was a limited edition short run, as a fan of the brand, I figured, What the heck? But as gorgeous as it was, and as well as it smoked, it was a full-bodied pepper bomb, and that was the deal breaker.

A couple of years ago I sat in on a sales presentation by one of the leading luxury cigar manufacturers. During the meeting, the presenter pointed out that the average movie usually runs about two hours. Next, he noted the cost of the movie tickets. For two people these days it can run upwards of $30. Add the popcorn and sodas and now you’re up to the tune of around $50. Then he asked the group what the average time was that it takes to smoke a cigar. We agreed it was also about two hours. Then came the clincher. When you’re smoking a premium handmade, you’re in total relaxation mode, often accompanied by a good drink to pair with your cigar; unlike the movie theatre experience where you have to sit through those incessant commercials, movie trailers, people chatting behind you, sticky floors, and cell phones going off like pinball machines.

The cigar smoker who indulges in the occasional cigar – one cigar on the weekend, or maybe only two cigars a month – would more likely relate to the above scenario. Compared to everyday cigar smokers who spend hundreds, even thousands of dollars a year on cigars, shelling out $16, $18 or even $24 retail for an occasional cigar may seem perfectly justifiable.

Cigar smokers who have lots of disposable income to spend on entire boxes of Opus X cigars, Davidoff, Diamond Crown, and Padrón Anniversary cigars aside, spending an extra $5 or $10 for something that proposes to guarantee a couple of hours of enjoyment might just be worth splurging on a golden nugget.

So, for what it’s worth, here are 10 “Splurge Cigars” to consider the next time your wallet feels a little fatter, a special occasion arises, or you just happen to be in the mood to reach for the top shelf.

Created to celebrate Joya de Nicaragua’s 45th anniversary, this puro comprises a perfectly balanced blend of oak barrel-aged Jalapa Valley tobaccos, plus a special, 5-year-aged ligero leaf, bedecked in a dark, oily Nicaraguan Habano wrapper. The smoke is deep, creamy, and rich in earthy Nicaraguan flavor with a ribbon of sweet spice laced throughout. It’s also amazingly smooth and not as high in octane as some of JDN’s other cigars.

Here we have another Nicaraguan puro gem. That this Le Bijou 1922 is a box-pressed Torpedo makes it even more of a handcrafted masterpiece. The wrapper is a shimmering Nicaraguan Pelo de Oro Habano Oscuro that caps a complex tasting blend of fully-aged long-fillers. The smoke is thick, creamy, and swarming with notes of sweet spice, black cherries, dark chocolate, raisins, leather, coffee, and cedar – about as complex a cigar as it gets. More full-flavored than full-bodied, you’ll want to make plenty of time to savor all of its finer qualities.

Created by Steve Saka, creator of the now-classic Liga Privada No.9 cigars, the release of Sobremesa – luxury class cigars, for sure – also marked the debut of his own label, Dunbarton Tobacco & Trust. As I wrote in my review of the El Americano: If you’re expecting something very similar to the Liga No.9, get that idea out of your head.

Its 7 leaf blend starts with a flawless Ecuadorian Habano Rosado wrapper that caps a Mexican San Andrés binder and a precisely synchronized recipe of Nicaraguan Condega, Pueblo Nuevo Criollo, La Joya Estelí Viso, Estelí Hybrid Ligero, and Pennsylvania Broadleaf ligero. The smoke is abundantly thick, creamy and loaded with a perfectly balanced mix of earth, pepper, and floral notes with a helping of natural sweetness. Relax with it after a big meal over lively conversation among family and friends.

Named for Nick Perdomo’s grandfather, Silvio, patriarch of the Perdomo Cigars dynasty, you can imagine how much heart and soul went into creating the family’s most prestigious cigar selection. Made with the cream-of-the-crop of Perdomo’s estate-grown tobaccos, these rare leaves are also aged in 50-yr. old oak barrels to bring out even more flavor. Perfectly balanced notes of coffee, cocoa, earthy spice, oak and sweet tobacco tumble toward the palate in a mellifluous mélange of savory goodness. Although Nick has gone out of his way over the years to keep his cigar prices down, the Edición de Silvio is truly special enough to warrant its luxury class price tag.

The Fuente Fuente Opus X Shark is known for being a stunner, but the Fuente Añejo is sublime, and here’s why: It’s a rare, limited edition in a box-pressed shape with the same Chateau Fuente Estate-grown Dominican fillers and binder as the Opus X. The big difference is the wrapper – a superb Connecticut Maduro leaf aged five full years in Cognac barrels. The smoke is smooth, creamy, richly spicy, slightly sweet, and brimming with complexity. Truth be told, the Añejo Shark is hard to come by, but if you can find it in stock, swim for it.

(Ed. note: the Añejo Shark is an in-store exclusive; clicking the link will direct you to the Famous Smoke Shop retail store site.)

This limited-run figurado packs an impressive amount of flavor thanks to its Ecuadorian Corojo-seed Habano wrapper that envelopes a blend of Dominican Criollo ’98, plus a hybrid leaf, and Pelo de Oro. The smoke starts out bold with caramelized notes of leather, chocolate, and molasses, followed by a rush of pepper that lingers most of the way through, exiting only occasionally, as flavors of earthy spice, dark fruit, nuts, and espresso are waved in at various stages. Though robust, this Bull runs more to the medium-full side, and has a longer burn time, too, so make sure you’ve got at least two-plus hours to spare for this one.

J.C. Newman’s Diamond Crown Maximus cigars are among the rarest of treats. They’re so skillfully made under the strictest quality standards, it’s no wonder they catch a heavy price. Only the silky-smoothest Ecuadorian el Bajo Sungrown wrappers are set aside for the five year fermentation period that results in a dark, shiny, creamy-smoking leaf. The fillers, grown on Chateau de la Fuente are aged for at least five years in both temperature controlled barns and French oak barrels. Only the best torcedors are permitted to roll these cigars, which are then aged a minimal 12 months after that. The smoke is exquisitely smooth, with a medium body that issues a creamy assortment of dried fruit, toasted nuts, sweet spice, and wood flavors with a sweet, leathery aroma.

Most experienced cigar smokers are well-aware of this limited edition line of luxury class cigars, and more than willing to shell-out a few extra Simoleans for special occasions. The wrappers alone are unique, in that, they are grown on the Chateau de la Fuente farm in the D.R. exclusively for use on these cigars. The smoke is full-bodied and punchy, issuing notes of red and black pepper along with flavors of graham cracker, cedar, and roasted nuts on a long, rich and creamy finish. You can’t miss with the “Salutes” from any year, but this 23 Year model is particularly captivating.

This Diadema from the Davidoff Nicaragua line not only overflows with deep, dark, Nicaraguan flavor and complexity, but if you’re going to spend almost $20 on a cigar, it might as well be something to admire while you’re smoking it.  10-years in the making, the tobaccos are grown in Nicaragua’s ultra-rich volcanic soil, adding to this full-bodied cigar’s creamy smooth, complex character and enticing aroma. Notes of espresso, earth, cedar, sweet and peppery spice, dark chocolate and citrus run rampant from end-to-end. If you’re already a fan of the best Nicaraguan cigars, don’t let this one get away.

Now for the Big Kahuna. It’s a Padrón 45 Years. Need I say anything more?

OK, how about this…All of the tobaccos in these dark, box-pressed beauties are aged 10 years, and although the cigars are full-bodied, the smoke is so incredibly smooth and balanced, you’ll never be overpowered. The only thing I can add to that is, if you’re already a fan of the brand, imagine all of that dark-chocolate, espresso and spice multiplied to the power of 10.  Nuff said.

If these luxury class cigars have left you a little sticker-shocked, remember that it’s not that hard to scrape-up a few extra bucks for a higher-priced stick, since we all spend money for nothing more often than we realize. Maybe you don’t buy lottery tickets or bet on a ball game this week, or one workday you bring lunch from home instead of going out.

What it really all boils down to is, if you want it, go get it. Or, to put it another way – as a t-shirt I once saw a cigar smoker wearing had printed on it: LIFE’S TOO SHORT TO SMOKE CHEAP CIGARS. (Just maybe not all the time.)

Read More
Cigar Ratings & Reviews
Estelí is the mecca of Nicaraguan cigars; and we're taking on the new Alec Bradley Black Market Esteli Toro to see if it's as potent a ride as promised. Does the follow-up to the highly-rated AB Black Market selection satisfy? Get our notes, watch the video and see for yourself!
Read More

CA Report: Cigar Tobacco From Countries That May Surprise You